Home | Fish Tails Blog | Ladies Day with Upstream Dry Fly
Anna Taylor, who recently joined Aardvark McLeod on the PR and marketing side, made us aware that her husband Howard Taylor, from Upstream Dry Fly, was organising a ladies tuition day at a private lake in the Test valley. She asked if Charlotte and I might like to attend, and we of course thought this was an excellent idea and jumped at the opportunity. I have normally found that women are better students than men. They are much better at taking instruction and advice (except if you are teaching your own spouse!) and tend to really want to succeed. They normally exhibit more patience and better timing as they tend not to compensate their casting with strength. 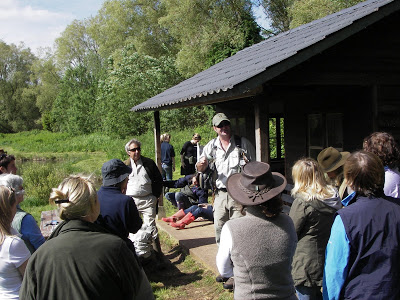 So on Sunday the 18th May we convened at the Peat Spade Inn outside Stockbridge at the appointed time for morning coffee. After the miserable day previously we were met with glorious sunshine and looked forward to the day ahead. Approximately 25 ladies arrived, and after a brief orientation as to the day’s timetable by Howard we left in Convoy for the lake. Howard was joined by Brett O’Connor and a couple of other instructors. Howard is a member of the Hardy Greys Academy, and all the equipment needed was provided by Hardy Greys, as well as of a couple of their female instructors from Alnwick. 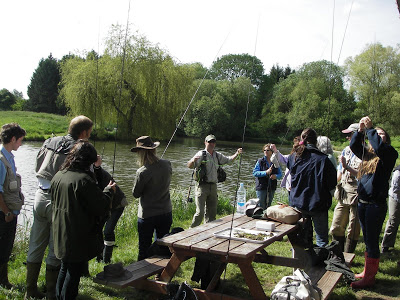 Once on the lake we busied ourselves tackling up 25 rods, and at this stage wool was tied to the end of the line to prevent anyone hooking themselves immediately. Brett then gave an excellent demonstration on the basics of fly casting and everyone went away to practice. I tried to be helpful by offering advice and demonstrations, finding the principal faults were too much wrist, as often is the case. Many also extend the arm too much instead of allowing the rod to do the work. However, after a short time everyone was getting along nicely and we did not spend too much time running back into the undergrowth untying leaders in trees. 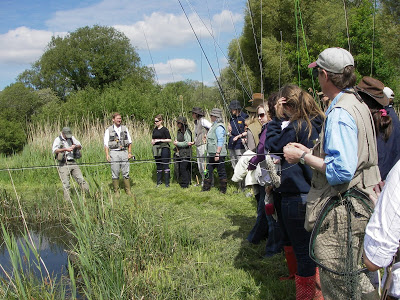 Brett then moved on to demonstrating the roll cast before moving into the back cast, and after these basic two casts had been mastered flies were produced and the students began to actually fish. I am proud to say that the first person to hook a fish was Charlotte who hooked and landed two in fairly quick succession. Even though she has been dispatched to catch sail fish on the fly in Guatemala and caught bonefish in Belize these were the first ever trout that she had caught. It was also an opportunity for her to christen her new trout outfit, a Greys Greyflex 9’ 5/6# with matching reel. It has a lovely smooth action making it ideal for those starting to trout fish. 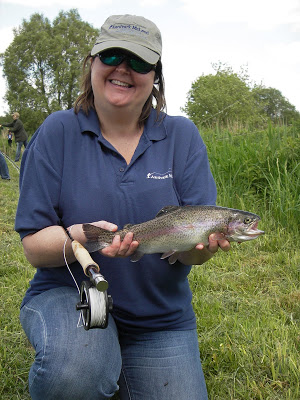 As the afternoon wore on the fish began to rise freely to emergers and any terrestrials that happened across the lake. At this point a few Mayfly began to hatch against the trees and wafted down across the surface making the trout go mental. As I wandered round the corner of the lake to where a small stream entered and created a current I found Sarah Fitzpatrick from the Field Magazine casting across it when a large brown trout came up and nailed a Mayfly off the surface. We both stared at it for a minute before I rushed up and asked her what fly she was using. The small Montana was quickly replaced by an up wing Mayfly from my box doused in Gink to keep it afloat.

“Are we going to catch that fish?” she asked. “Absolutely” I replied full of confidence. The small stream created an excellent flow in the lake, and a number of fish were taking Mayfly being swirled down the current before it petered out into still water again. Sarah had never caught a trout either. She cast the fly accurately, but not quite far enough. “further out and a little higher in the current…” I added helpfully. After several more casts the fly swung round in the current and a good sized rainbow slowly rose to the surface, opened its mouth and engulfed the fly before continuing its roll to the depths again. “Strike!” I yelled, the line went tight and the fish was on.. It immediately jumped producing squeaks of excitement from Sarah before Brett came pounding along the bank with a net. 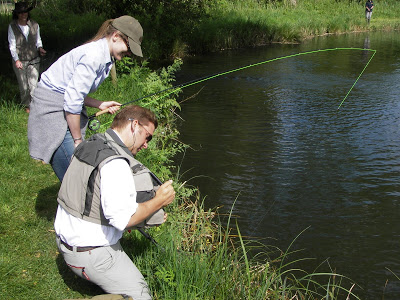 Now, this fish really did not want to come in. I showed Sarah the concept of side strain, and each time the fish would move in one direction she would apply pressure in the opposite way. As this was her first fish both Brett and I were working hard to ensure she did not lose it! Eventually after a nail biting fight she moved backwards from the bank and slipped the fish over the waiting net.. Great! Her first trout, and on a dry Mayfly! Excellent! Then it was back to the Peat Spade for a fabulous late lunch. It was a really great day, and I hope something that Howard will repeat. For too long ladies have been left on the bank so to speak, and most women I know who have started and carried on with fishing tend to put other fishermen to shame. 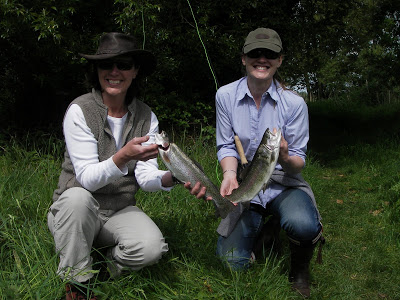