On the 22nd of January, the 5th week at Las Buitreras started with the river low and clear and definitely very technical –meaning with it  was “quite tough”  Besides the conditions, the group began very much focused on working hard. The results, a 20 lb for Siv to start the count in our catch book! She managed to get this gorgeous sea trout out of Little Corner, in beat #2 with guide Juan Manuel. For Siv (and husband Dag) it was her 2nd time at Las Buitreras after being here in 2009, and having caught the biggest fish of that season, a 24 lb fresh hen fish in one of our favorite pools in Beat #4, “Raquel”, with guide Diego Peralta. 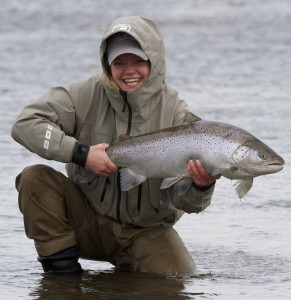 We had an unusual guest this week, unusual for her age, 3 ½ Nicola came with dad Chris and mom Jennifer. For Chris, it was all about trying to raise sea trout skating bombers on the surface… some said it was unlikely to happen, some said it was impossible. For fact we know that on certain conditions sea run browns on the Gallegos do go up. During those days we always carry a rod with floating line and some foam based pattern… but what Chris was about to do has never been seen before around here…

So for the last two weeks the whole crew of Las Buitreras was hoping for some rain to come and make the river rise as the level was already low… well, it did. And just for the records, the rain dance works, and it works like a charm. By Monday evening the river was 60 cm. higher! It came up slowly, in stages, so it didn’t get too muddy at first but the wind took care of the rest.

With the new water conditions and the fish getting adapted to it, fishing hard was the best way to try to succeed. For Lars, a good friend and guest who’s been with us for several years, that was the only way. He managed by the end of Tuesdays morning session to hook a proper fish, and it was big, so big that he took some of his running line at first, and eventually all of it, before breaking the knot to the backing… a real epic fight for him.

Luckily there was a man in this group who could save the day, and so he did…, his name: Howard “Howardo” Evans, a British citizen and skilled angler considered by many a legend… he caught up with the numbers by hooking and landing 6 fish in a row. He certainly deserved every fish he released for the hard work he put in.

Howard was not the only one to get some action that day. Edie did very well too. Edie was a first timer at our lodge and also did very fine for “Team UK”. He started his count for the day with two fish in “El Puesto” pool, with one of them over 15lb.

so going back to the whole “dry fly fishing for sea trout” thing, well, it surely requires commitment from the angler… this is not like trying 10 casts and going back to a nymph… you have to dedicate and spend time knowing that you could have many fish with a sank line, but that you just want one on top. So Chris did it. He committed, worked for it –in the meantime showed our guides the proper way to make a bomber work- and he made it with grace.

It was the evening session of the last day of the week, in the last pool, where he managed to make a fresh hen fish rise twice to finally take his bomber. After the fish was landed it was measured… the weight: 21,5 lb. No words no describe it… Chris topped it of with the biggest fish of the week on a dry fly. Congrats for Chris and what a way to close the week!

The outcome of the week was more than positive. The new water let all the big fish we usually see in this part of the year came into the system. Every fish reminded us the shape of rugby balls, and were full of energy and muscle. They were all fresh, white-clean and shinning… simply perfect.  As a direct result of the bigger fish in the system, this week our average size also rose to 11 lb.