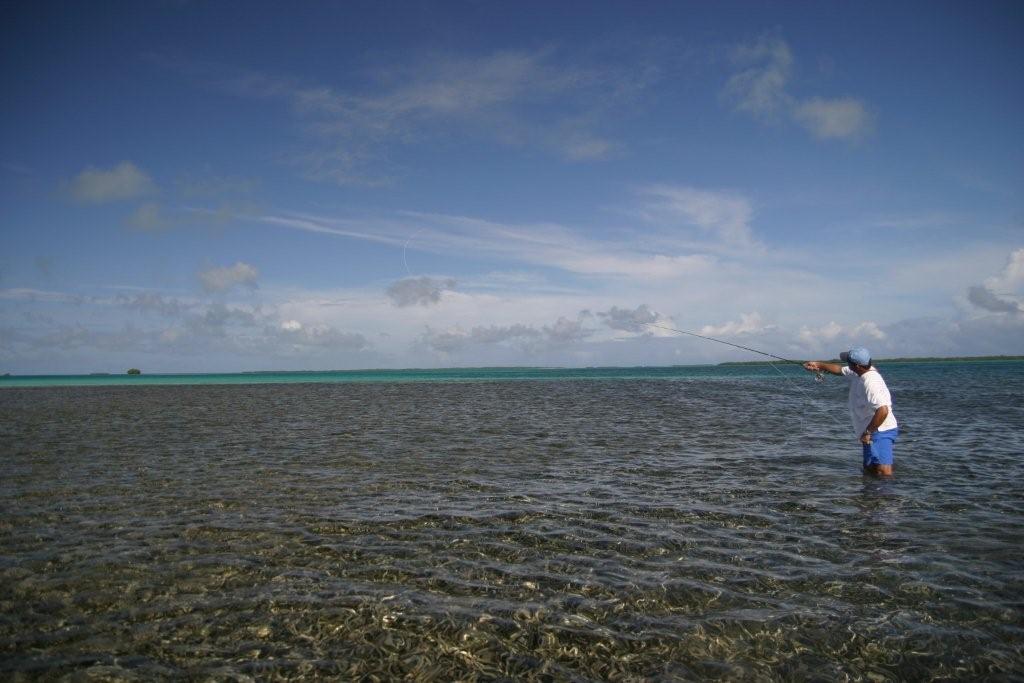 Weather was cracking first thing this morning, and as usual most members of the party struggled with the time difference and many were up and about early. Phil Mellor led the dawn raid on the dock and was greeted by the site of tarpon rolling in the bay and also schools of jacks tearing into the bait fish there.  After scaring a few fish they headed back for breakfast.

I fished with John Thornton today for his second day out on flats ever, and Chris Yrazabel joined us. Our guide for the day was Darwin. We headed directly for the pancake flats for which the tide and light were absolutely perfect, an incoming pushing tide as low tide had only been an hour or two before hand. There was a light breeze on our backs as we stepped onto the first of the pancakes and we were immediately greeted by the sight of waving tails glistening in the morning sun. John and Darwin hooked into a fish almost immediately, and Chris and I moved down the windward side taking alternate shots. As I moved towards the bottom side of the flat my attention was grabbed by some fish flashing off the edge of the flat. Thinking they might be jacks I headed over to investigate only to discover that it was a school of large bonefish actually busting on bait fish! They were rolling as a school chasing minnows out of the water. To say it is unique is an understatement, and I have only ever seen it a handful of times before and only know of it happening here. 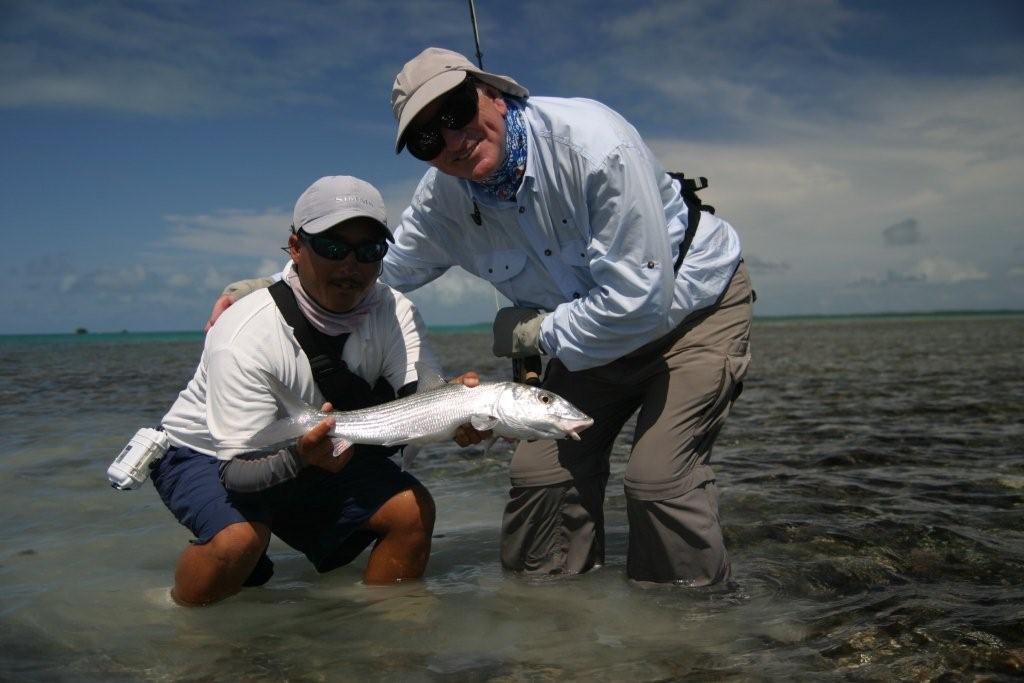 What followed on was pancake paradise. With the incoming tide pushing through until high tide at 1500 we had some of the best action I have seen on the pancakes in a number of years. We encountered some huge schools of fish and after hooking a few out we would then move onto the next flat. On the Horse Show Pancake I hooked one tailing fish on a small bonefish bitters and obligingly led the school over to Chris where he immediately hooked another. His fish tore down the left hand side of the flat scattering others as it went. All three of us had plenty of action all morning, and as we headed over the conch shack for lunch to meet Bill Thomson, John had had 5, I had 5 and Chris had 4, the biggest being 6lbs or so. I enjoy going to the conch shack for lunch as it gives the opportunity to get out of the sun for a while and enjoy the surroundings. While we waited for Bill to arrive I wandered round the back to see if there was anything doing and found a school of maybe one hundred fish at the top asleep in the waves and enjoying the sun. Against the waves they were almost green in colour. I managed to nick one out of the back by casting straight into the wind which is always satisfying before joining the others for lunch. The afternoon session was tougher as the tide was slack making the fish much spooking, but Darwin did an excellent job and showed us plenty more opportunities before John and I decided we had done well and were ready to head home. 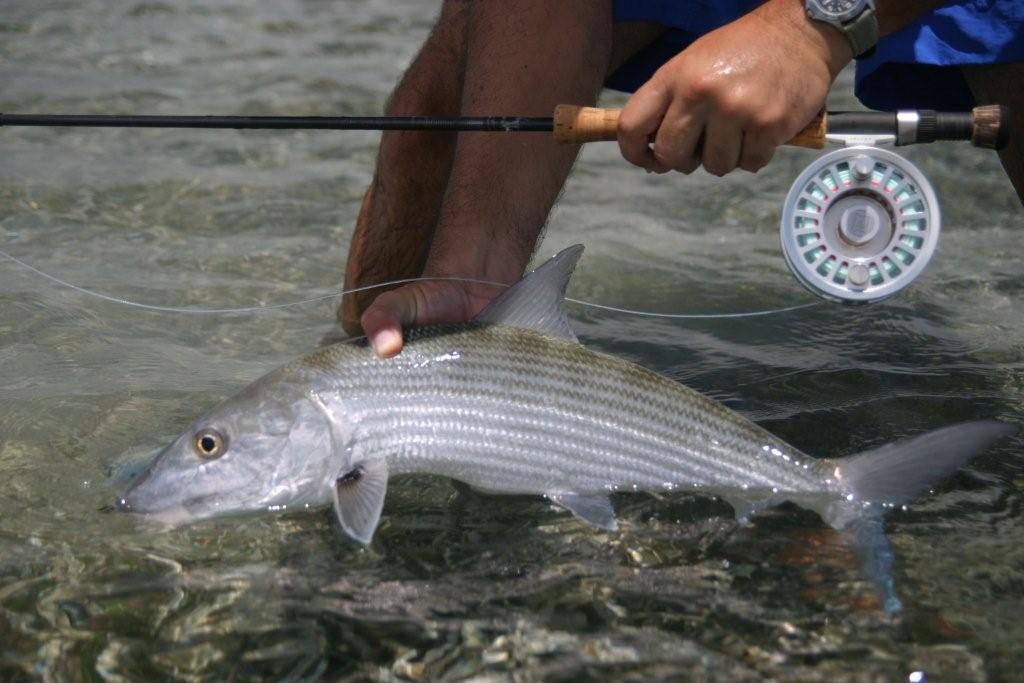 Back at Acuarela and some of Mimo’s fine homemade pizza I tallied up the days catch. Everyone had a cracking day and the total was 51 bones, 1 8lbs snook by Mike Timms, One lost Tarpon from Tim Aldiss, 1 jack of 15 lbs by Geoff Haslam, I Bonito by Phil Mellor, 1 bar jack by Ian Hutchinson that nearly spooled him on a 7 weight and a 3 lbs needle fish. Not a bad day all in all and spirits were high at dinner. 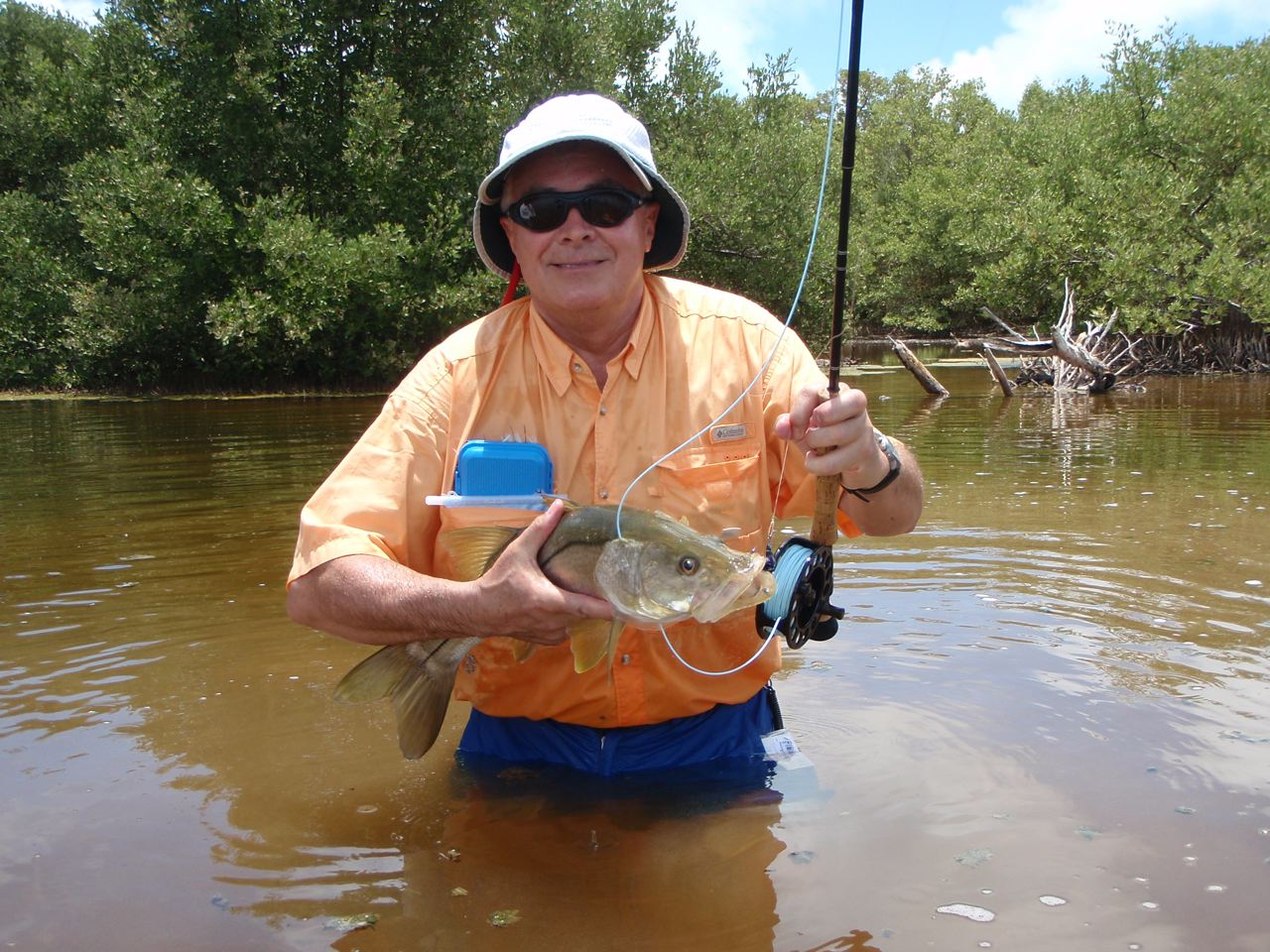