Home | Fish Tails Blog | Los Roques, Venezuela, Day 1
The trip started well with our flight from Lisbon on TAP (Air Portugal ) being practically empty. This allowed all of us to have four seats to ourselves! Nice! On arrival in Caracas we were swiftly scooped up by the wonderful Tony and whisked off to the Eurobuilding Express hotel which took only 10 minutes. That evening the party went out to dinner down by the Marina with Ramon Paz, Chris Yrazabel’s partner at Sightcast. After a fantastic steak we headed back to get some rest before our departure the following morning for Los Roques. 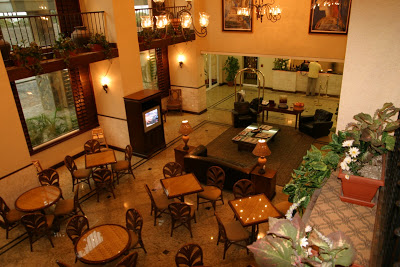 The flight to Los Roques only took 30 minutes on the LTA Dash 7 aircraft, and even though by this stage some of us had a little bit of a 1000 yard stare we were all buzzing with anticipation of the days fishing ahead. The sun lit up the warm in an incredible aquamarine colour that is so unique to Los Roques as we banked over the town of Gran Roques before coming into land. As we passed through the “airport” (more of a wooden shack on the beach) Chris and his team of guides were all there to meet us. As we caught up with old friends Chris escorted us to the Posada Acuarela which was to be our home for the next week. The guides arrived with the luggage and suddenly there was the usual pandemonium as half of the UK’s tackle shops was spewed all over the tables. 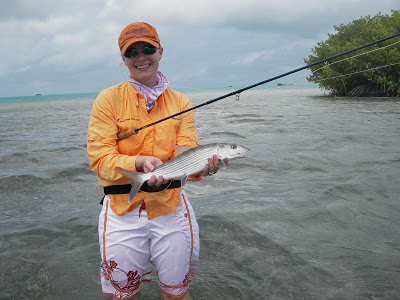 The first day is always a bit mad as everyone is totally overcome with anticipation and half the gear is left behind. I was no exception which was to be my detriment later. We experienced a little mixed weather on the first day with a couple of sporadic showers making fishing a little tough with the bad light. Never the less most managed to get off the starting blocks with a fish or two under the belt. The pancake flats are as fantastic as I remember, and we all saw some impressively sized fish well over five pounds. During the afternoon I was wondering down a beach flat at Madrisque and happened up very large bonefish harassing a pelican after it had dived into the band of minnows. Casting the flash minnow I was using I dropped the fly about two feet away from it giving it a couple of sharp strips and this silver torpedo whirled around and hammered the fly before deciding it would prefer to be in Cuba. I stared in awe as I watched the line disappear through the rings and suddenly realised I was half way through the backing and this had to stop. 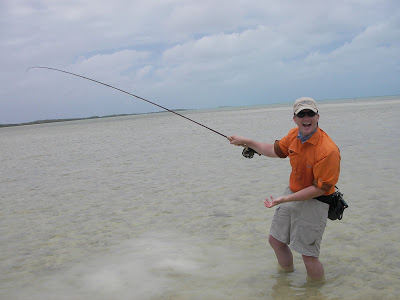 I clamped on the anchors and began to give it some stick. After a short tug of war I won and beached the largest bonefish I have ever caught. As it wallowed in the surf I laid it against my rod with the tip of the fork against the butt. The fish’s head reach at that point approximately two centimetres from the first section of my four piece SAGE. Wow…. and popped the barbless minnow out of it’s mouth and pointed into the surf before gently releasing it. In conferring with the guide and Chris we estimated the fish at approximately 12 lbs. Quite a way to begin the first day! That evening we were treated to our first of Mimo’s dinners. Mimo used to cook in a restaurant in New York, and apart from running Acuarela in Angelo’s absence he is a superb chef. I think I can put my hand on my heart and say this is the best food I have ever had in a lodge.