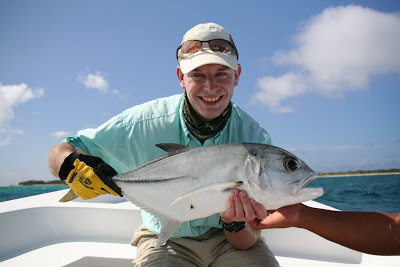 Sunday certainly has not been day of rest. The weather has been a little tough, and we were greeted with overcast skies and reasonably strong winds. However, Will Proger and James Steele-Perkins had a fantastic day with their guide Raphael. the two of them set about smacking a bunch of bones off the beach flat out at Brujusqui, and Jamie caught a nice pompano for a little for a little variety. Suddenly their attention was drawn by a large gathering of pelicans and sea birds chasing busting bait fish, so they leapt in the boat and chased after them. Under the bait fish was a school of horse eye jacks and amid much hysteria Will threw a cast out and the line went tight. Unfortunately he was using his seven weight bonefish rod and eight pound tippet at the time…. line screamed out of the rings as Will realised he was in for a serious fight. Raphael turned round uttering the immortal words “you had better relax my friend, you are going to be here for a while!” After a 50 minute battle he managed to land it, a ten pound horse eye. He was shattered, but elated. A fish of that size on a rod a tippet that light is a great achievement, and one he will treasure for many years to come. 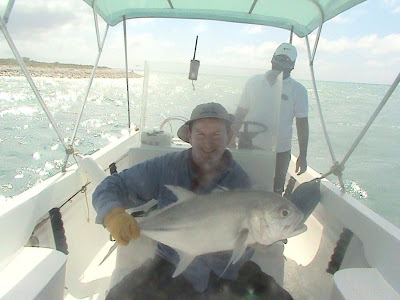 Liam Collins also achieved greatness by landing a number of decent sized barracuda, and then a fantastic 30lbs Jack Crevalle on light spin gear. Everyone caught fish, but with condition begin what they were, the pancake flats were a real challenge as most of the fish would see you before you saw them. One would often end up stepping on them causing a large splash and putting your heart in you mouth. Although this is tough fishing it can be very educational and rewarding. As a fisherman you learn more in tough conditions as you have to stop looking for the fish in the water, and start looking at the water. A fin or tail can often be all that gives away the position of a fish as it roots around looking for crustaceans. Nervous water is the other tell tale sign. As a feeding bonefish moves in skinny water, especially against the wind and tide, they push water in front of them giving their position away. 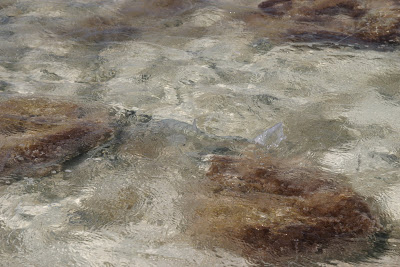