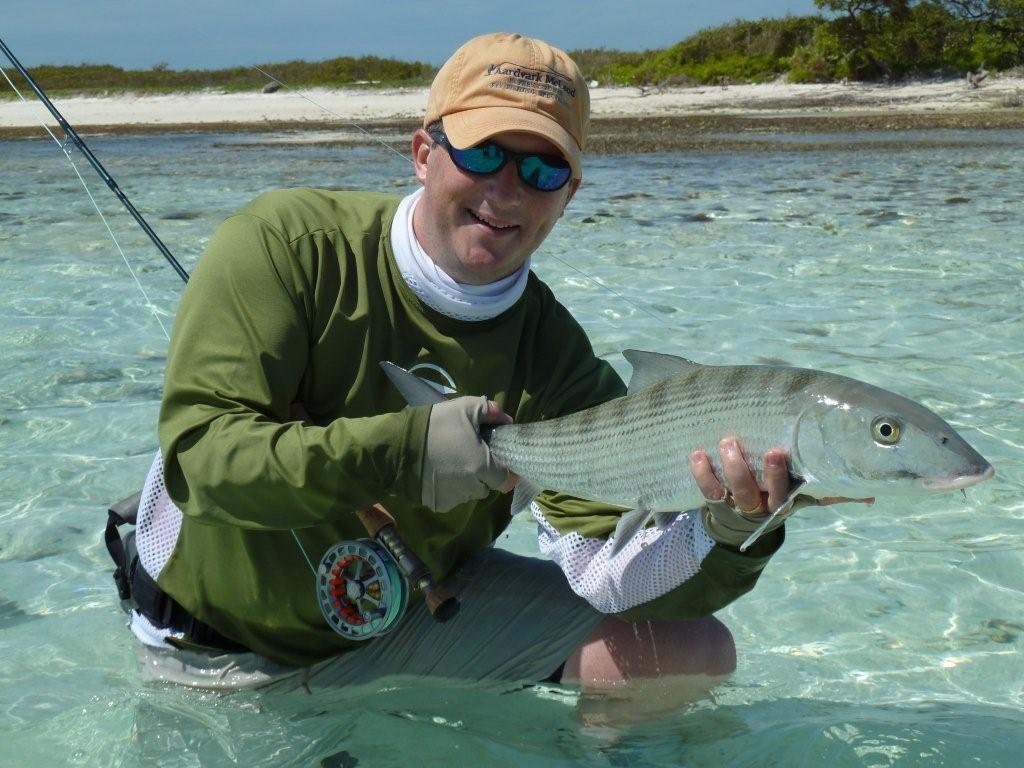 Today I fished with Peter Moylan and had the best day so far. Rather than hit the pancakes we ran over to the lagoon on Rabusqui to see if we could not find a tarpon. On arrival there were tarpon rolling quite frequently along the back of the lagoon and we spent some time throwing all sorts of things at them, but to no avail. As Peter had fished the bottom end of the archipelago at Caranero and Mosquitoqui the previous day I thought he might like to see the northern edge so we headed over to Madrizqui. This time Darwin, our guide, started us off on the ocean side. It was low tide and the coral heads were clearly visible as we wandered along the beach. Peter Moylan was tying tippet material onto his leader when along the edge came a pair of really good sized bonefish marauding along the edge of the beach. I was up. I lengthened line on the Hardy Proaxis 6# and dropped the flash minnow slightly to one side of the smaller one, but it had already changed direction and did not see it. I recast, and this time put the fly across the larger fish and started stripping it. The bone turned on it a wolfed it before tearing off in the opposite direction. 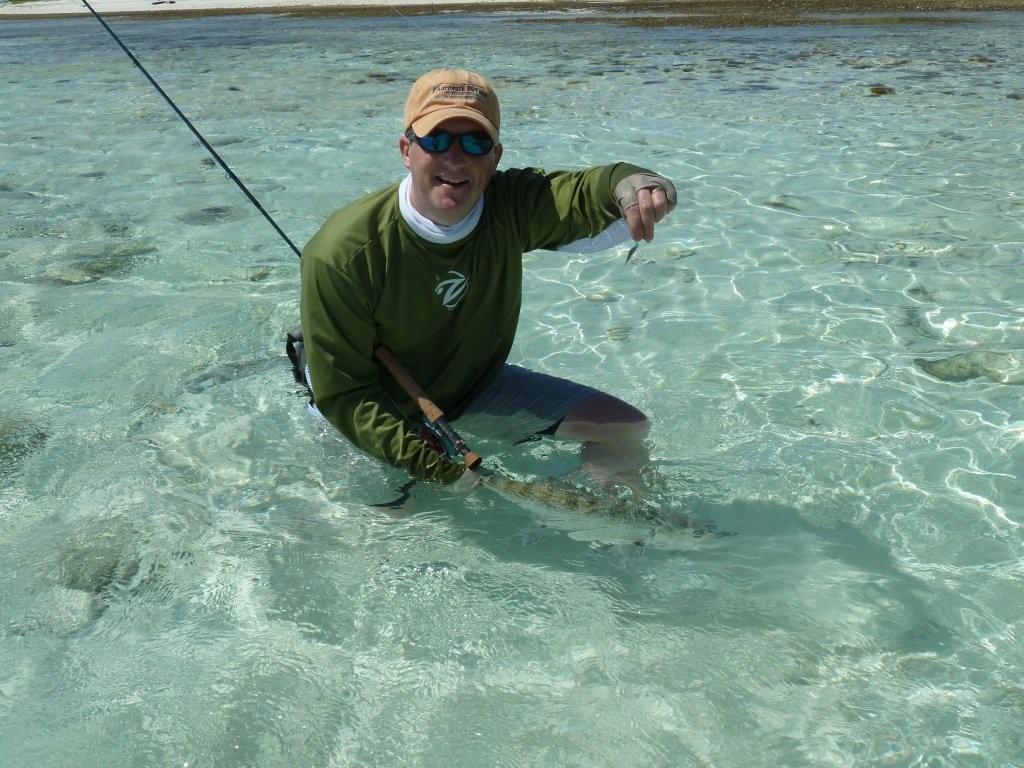 There were coral heads everywhere so I kept the rod well above my head and started applying pressure. The fish was zig zagging through the coral bomies and I started to pray as the line tore of the reel. Then the backing picked up a lump of weed and kept the line down in the water. I really thought it was only a question of time before it cut me on the coral, but by running forward towards the weed and releasing some of the pressure I managed to remove the weed. The backing then got wrapped around the tip when the line went slack as I held it in my left hand. I wiggled it over, the line came free and I threw the rod back in the air to find I was amazing still connected to the fish. After cranking up the drag and leaning on the 6# the fish began to come round to my way of thinking and finally Darwin grabbed the leader and cuddled the fish. I put it on the boga grip and the level rested at exactly 8 lbs. Awesome. I removed the Los Roques minnow and gently revived the fish before watching it swim away strong. One of the battles where the fish gods were on my side I think!

Not long afterwards another fish came down the edge which potentially was larger still. Unfortunately Peter Moylan was not so lucky and this fish spooked from the fly. He did hook a lovely 4 lber further down the beach though which Darwin ran after clearing the line from the coral as he went before the fish made a dash for the beach and beached itself! How very kind of it! Unfortunately by the time we got round the corner where the tide had turned the water cloudy so we moved off. The rest of the day produced a few more fish and then we heading back to Gran Roques to try for a tarpon in the bay. On arrival there were tarpon everywhere rolling in the bait balls, and after some persistence and numerous fly changes Peter Moylan (We are all getting slightly confused with three Peters, although Peter Vikanis has now been nick named Hans as he lives in Germany) finally hooked a nice tarpon of about 12 lbs on a small gummy minnow. It came four and a half feet out of the water and after another couple of jumps wrapped him round an anchor rope. 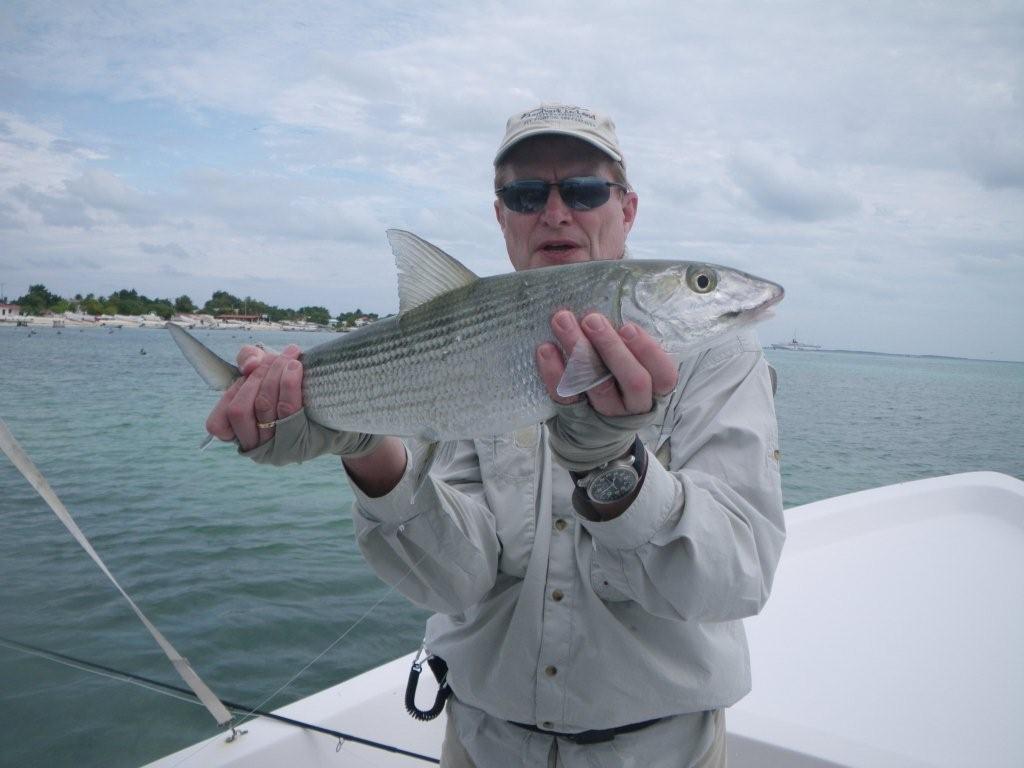 On returning to the Posada we saw Peter Vikanis who had a magnificent day fishing locally. He too had been trying to target the tarpon, but with no success. However beforehand he had fished the same cays we fished yesterday with the floating gummy minnow and estimated he had caught with Raphael a dozen or so fish between 5 lbs and 8 lbs. Tim Aldiss had also smacked a few good fish, so home for tea and medals.