Today the morning began with blazing sunshine, and there was an excited chatter at breakfast. The wind laid down and breakfast was dispatched with utmost haste as everyone piled out the door to the waiting boats. On the way out to the flats some loud cover came over, but this dissipated by the time they hit the pancakes, and many were greeted by the sight of tails glinting in the sunlight. 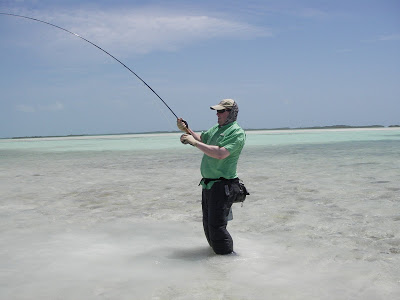 Rick Scott was lucky enough to be allocated single boat and paired to Cayito. Wading across a vast flat they happened upon a few small rays and a school of angry looking cuda which he unfortunately was not tackled up for. The hard work put in crossing the flat was rewarded when a large school of bonefish slid into view. Casting like a demon Rick nailed five bonefish in quick succession all between two and five pounds. Even though they were wading into the sun with the wind on their backs, Cayito´s eagle eyes made for a terrific morning. He then met up with Will and Jamie at the conch shack to compare notes before heading off to smack another five in the afternoon, bringing his total to ten for the day. 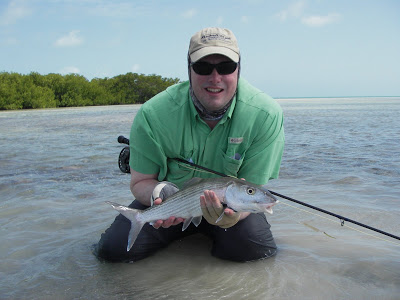 Raphael had begun the day by enquiring what he really wished to target for the day. They quickly hatched a plan to head to the tarpon lagoon to see what they could find. Wading into classic mangrove habitat they quickly fell upon both baby tarpon and snook. Raphael commented he had never seen so many snook. Unfortunately Jamie had committed a terrible sin and left the correct box of flies at home…. on his bed. Muppet. However they had a fantastic time for the morning and had a couple of takes from tarpon and a large swirl from a hungry snook. They then moved onto the beach flat outside the lagoon and Jamie landed his biggest bonefish of the trip tipping the scales at five pounds. He then lost a couple of monsters on the coral. I think a few lessons were learnt here… 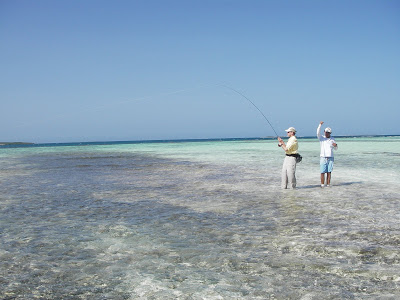 Elisabeth, Jane, Andrew and I decided to take the day off today to relax and enjoy the scenery. After a relaxing morning of doing absolutely nothing we met for lunch under mimo´s watchful eye, before retiring up to the roof terrace to chat, look out of the bay and continue to…. nothing.
We contemplating taking a walk up the 15th Century light house on top of the hill to see the view across the bay, but in the heat of the day it seemed like too much effort, so more drinks and rocking in a hammock passed the time. Finally, at about 1530 we thought we would take a rod down on the beach and see what was going on the local “pig bones”. On the shore front there are some bonefish of such enormous proportions it blows the mind. There are certainly fish there of 15lbs or more. I know this sounds excessive, but they are well documented and spend their days swimming through the local fishermen coming and going in their boats, round the children playing off the dock attacking pelicans for an easy meal and generally behaving like pet pigs. Oh, they also destroy a fly fishermen once in a while for sport it seems.

We arrived on the dock and immediately saw a pack of them. After a few expletives about size etc, we threw a few casts out with some flash minnows. After four cast Elisabeth´s 7 weight gave a huge buck, she mumbled fish on, and her reel began to shriek as the fish tore line off the reel. About the same time the boats began to come back and as I ran down the dock and onto the beach other members of the party began to congragate. I leapt into the water and managed to prevent the bonefish from swimming under the dock, at exactly the same time as the next wave came in. I quickly pulled the fish in my direction, and the wave spat the slightly confused fish on the beach so I could pin it. We took a couple of shots and then released it, estimating it´s weight at seven pounds. Not bad considering we had only gone 30 yards from the Posada! 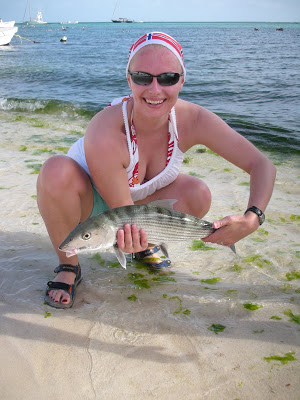 Just before I let a client of mine that knows Los Roques very well had sent me some floating gummy minnows saying he had managed to get bonefish to eat them off the surface. Seemed like a good time to try! I pulled one out for myself and one for Will and we cast them off the dock. After about ten minutes of twitching and not much happening suddenly out of no where a massive bonefish cam up and tried to eat Will´s minnow… Unfortunately it did not stick. We then discovered that if we cast at the pelicans, and then allowed the small black headed gulls to try and grab the minnow but pull it away, it was possible to keep the gull around the minnow. This is what attracted the bonefish. Another fish cam out of the water almost bodily after my minnow, but again I could not hook it. As you can imagine along with a few beers this was hugely amusing so there were shrieks of giggles from the surrounding party. As the sun went down and the sky went red it was time to head back to the posada for a shower and some dinner. We are definitely going to have a go again tomorrow as that was way too much fun!