Right out on the north western edge of the archipelago is a very long beach flat key called Carenero. This and the small keys of Lanqui and Mosquitoqui have long been a favourite of mine. Will joined Elisabeth and I and together with Jesus our guide we set off rapidly after breakfast. It is one of the longest runs they do here, and takes approximately 45 minutes to get out there. The sun was shining, there was not too much wind, and our spirits were high. 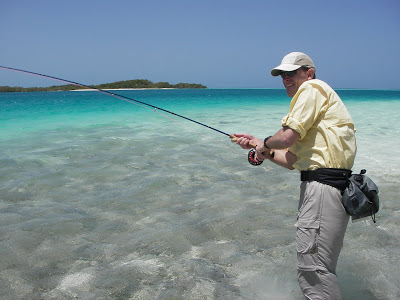 On arrival there is a small island just above this area called Isla Felipe O Brujusqui that has a wonderful pancake flat running around it and is often the home of some really good sized fish. This was also the day I had chosen to try out my new toy, an underwater housing for my video camera. Jesus led across the island, through some tightly packed mangroves and we popped out on the flat… with a strong wind directly in our faces.. Will moved up wind towards the top end of the island with Jesus, and I followed along as camera man. Suddenly out of the corner of my eye I spotted movement on the turtle grass and a couple of very large bones became visible, rooting up wind and sticking their tails up every so often. A very difficult up wind back hand cast…. Go on Will! Hauling very hard to make the line punch into the wind the fly came down very hard and the fish spooked. We kept moving. 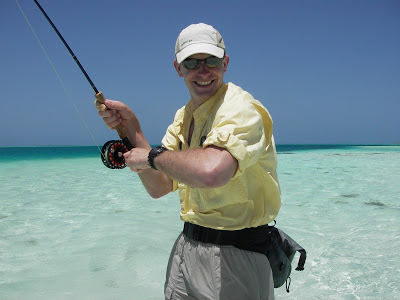 Swapping over the other side of the channel to Lanqui Will quickly hooked up off the white sand beach on a hot flash minnow. He humoured me and allowed me to chase it around a bit with the camera before we quickly landed it and released it. A nice fish of about four pounds and a good way to start the day. We moved around the corner and Jesus stopped Will with his hand and pointed. Upwind of him in the deeper water were two or three really large fish. He threw a high back cast and a low forecast, tucking the tight loop into the wind. The fish slammed the fly like a ton of bricks and ripped line of his reel and well into the backing before he brought it under control. He expertly used the angles on it and on landing it hit 7lbs on the boga grip. His biggest ever bonefish! 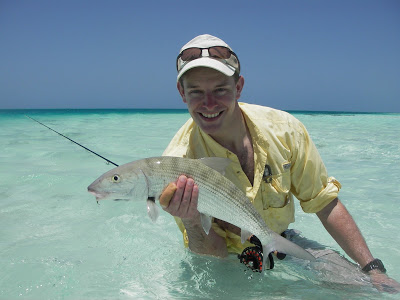 After a quick wade across the channel looking for jacks we arrived on the tip of Carenero. Elisabeth had sit the last one out so Will designated her fisher and Jesus began to lead her up the beach. Just before the shacks we saw what we had been looking for, white lines moving through the clouds of minnows. In the white holes we saw some “Cerdo Macabi“… “pig bones”… She threw a fantasic line straight out to intercept and Will and I watched in suspense as a massive fish turned and chased it.. but failed to hook up. Oh! So close! 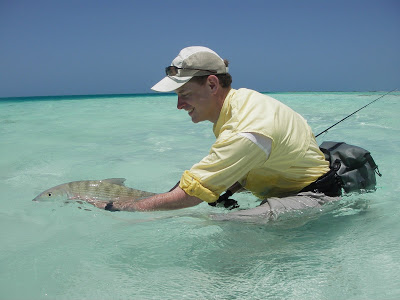 She continued down the beach with Jesus scanning the water like a radar, his eagle eyes looking for any hint of movement. I froze like a heron, and slowly moved into the point, showing her the fish and making sure she had seen it before she cast. The line sung out to encouraging comments from Jesus, the fly kissed the surface and almost as soon as she started to strip in the fish charged and hit it with a real bang, screaming out line as it the hot bone headed for deeper water. After a little bit of tug and war, she landed a lovely fish of five pounds on her 7 weight Sage. Sadly the next few fish refused to play ball, often chasing the fly, but Will did not managed to hook them. We took a short break for lunch at which time I took the opportunity to wander over the island to the ocean side which is stunning. You can clearly see the drop off just on the other side of the crashing surf.

For a change of pace Jesus decided we would head to Mosquitoqui for the afternoon session. This is an ocean flat, crystal clear water with white sand that then changes to sand and turtle grass as it swings round the corner. Will and Jesus took the inside line and I waded along the edge. It reminded me a lot of the Seychelles in nature. I saw the other tow casting in towards the mangroves, Will´s rod looking like a cat´s tail before it pounces. He hooked up, but then I saw everything go slack. I moved out onto the turtle grass and immediately began seeing fish, all coming across my left shoulder across the wind. A few deft backhand casts produced a couple f nice fish in quick succession, all surprisingly on minnows. I would cast above their line of travel so as not to spook them in the skinny water, and then start stripping it towards them. Each fish careened forward and simply engulfed the fly. Turning round to see how the other two were doing I saw Will had switched to the 10 weight Cuda rig Jesus had been carrying for him. I caught a couple more fish. 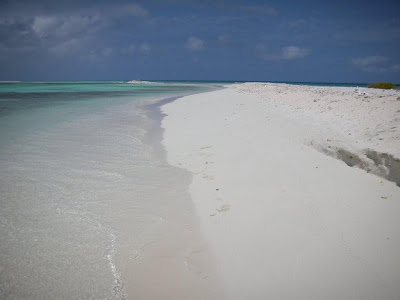 As we moved across the flat I continued to pick of fish with the minnow. I had the sun across me and the wind in my face, but that only made it more exciting as I each time I saw one I dropped to one knee to keep my profile low, and each time they charged the minnow, trying to yank the rods out of my hand as they raced off across the flat. At one point one fish went all solid and I feared the worst. As it arced across the flat it had picked up a ton of weed, doing an effective scything act. Pointing the rod at the fish I began to wind and moved up the fish. I could see its tail flapping pathetically with its head completely covered in weed. Just behind it was a barracuda o about 20lbs thinking it had found an easy meal. I jumped towards it, spooking it effectively before carefully releasing my fish in the opposite direction. By the time we got to the end of the flat I had racked up nine fish. What a session! Will had had two, but as he was on the inside track all the fish he had been casting at were incredibly wary due to the Cuda lurking near by. We compared notes as we headed back to the boat to grab a beer and head for home. On returning back to the dock Will caught a fabulous fish of 6 pounds to finish the day off nicely.