The rain was already falling as we left the dock, and I knew this was going to be difficult. The last day I was to fish with Tim Aldiss the giant bonefish catcher, and my old friend Cayito the guide. Cayito has the eyes of a hawk, and as is one of the most senior guides on Los Roques. On grey overcast days like today interspersed with rain one way around difficult light conditions is to find flats with white sand bottom as it is still then possible to spot fish at a distance. We ran for 30 minutes in the lashing rain (Rain jackets are essential on any saltwater fishing trip) down the West side towards the lighthouse channel to a large open white sand flat. Cayito’s eyes proved no exception here and despite the flat light we came up on a school of bonefish holed up near the edge of the beach. Tim had first cast and immediately hooked up as the school competed for the fly, but unfortunately the fish cam off. I whirled round and managed to shoot off a cast into the wind and nicked one fish out the back. 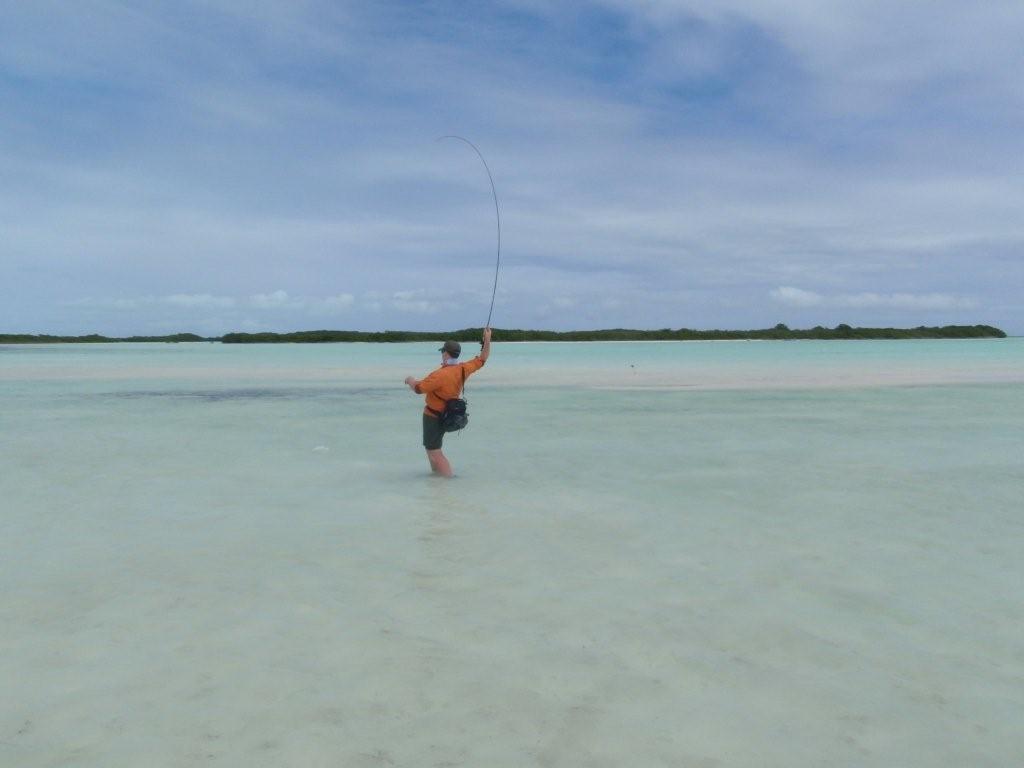 The light was still not good and we continued round the bay before we found a few tails waving gently as they fed on crustaceans in a weed bed. Under Cayito’s watchful he marked out the fish to Tim who was struggling to see them. He gave him a reference and Tim put the cast down with prefect precision. Cayito indicated when to start his retrieve and shortly afterwards the rod flew up and the fish screamed across the flat. We managed to produce a couple more before heading off to have lunch in the boat. After lunch the tide was dropping rapidly and our options became more tricky with the low light conditions. The next flat we stopped on can only be described as the long walk. As the tide was very low we could actually wade across the inner part of the lagoon that we did for most of the afternoon. The fish would suddenly appear out of know where and require a rapid shot. Tim and I both managed a couple more fish although we must have walked for about 3 miles before finally arriving back at the boat. The last afternoon was somewhat running away from us, so in a large ditch effort to find some tailing fish Cayito took us to one of the ocean side flats of hard coral. Sure enough as we found fish tailing and finning across the flat. This required some serious stealth, and the best way to approach them was to wade around the edge of the flat in the deeper water. Nevertheless I found it frustrating as every time I put a cast out to a tailing fish I would spook the rest of the school that I could not see in the glare and flat light. Tim was again firing on all cylinders under Cayito’s eagle like eyes and picked up two fish in quick succession, a great achievement in such skinny water. 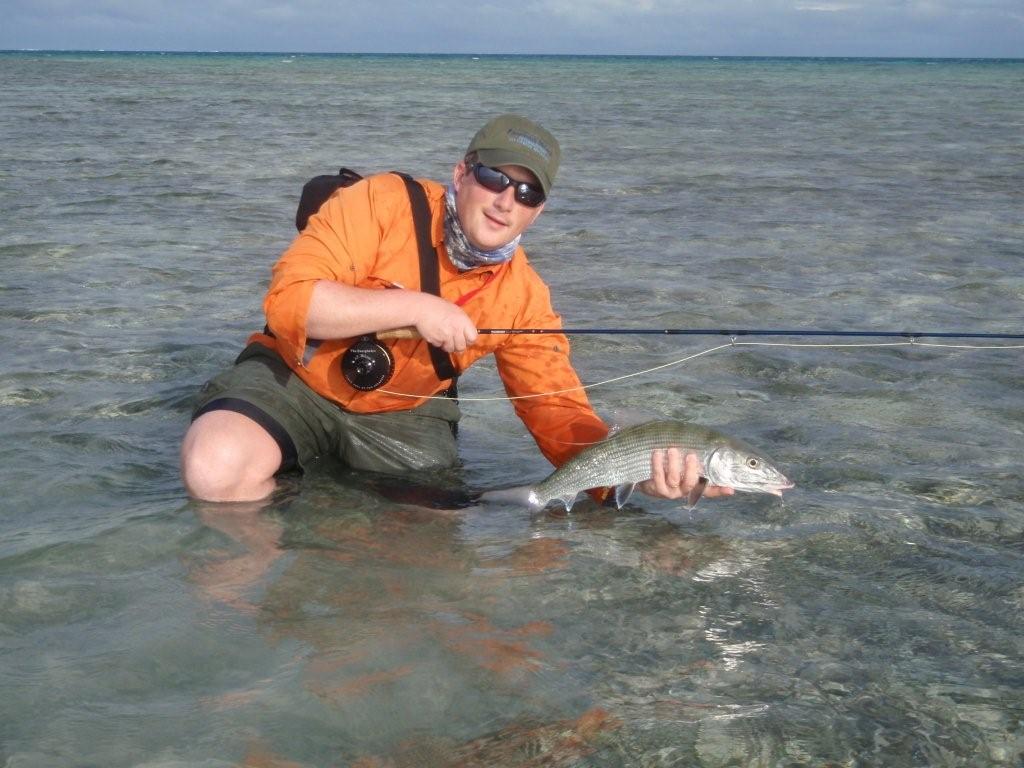 I was just about giving up when I saw something large come onto the flat some way off below me. It was throwing up one hell of a bow wave as it came careening across the flat. I picked up the line and fired off one cast that miraculously landed the fly one foot in front of the bow wave. My heart was in my mouth as gave the bonefish bitters one small tweak and the bow wave was right on top of the fly. The line went tight, the 7 weight gave a vicious buck and line screamed out across the flat. Before I knew it I had 50 yards of backing out and was desperately keeping the rod held high above my head to prevent being cut on the coral. After some serious pumping I managed to turn the fish and make some line back. Eventually I brought to hand a fantastic bonefish of about 6 lbs. What a cracking way to finish off the trip, and the beer on the way home tasted that much sweeter! 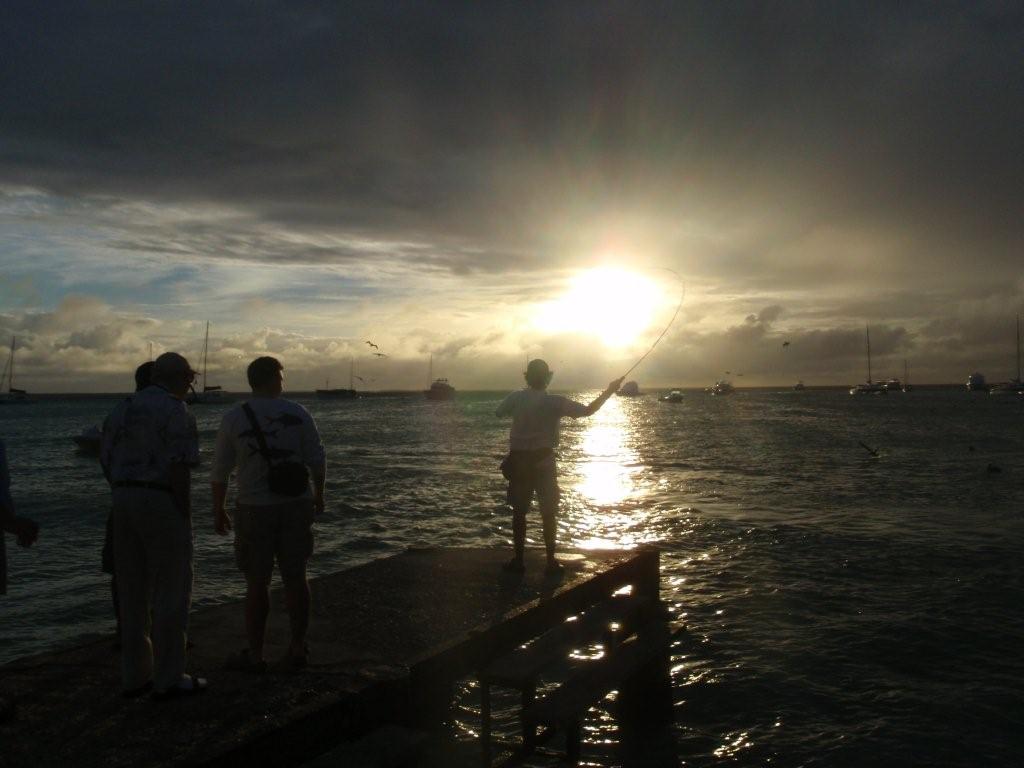 That evening we held our annual guides casting competition which I always enjoy. The fishermen always enjoy this event as it is a chance for them to see how well their guides can perform and also to heckle them for all the abuse they have received during the week. Hower hung onto his title from last year winning with a fabulous cast of 44 yards. Weel done!