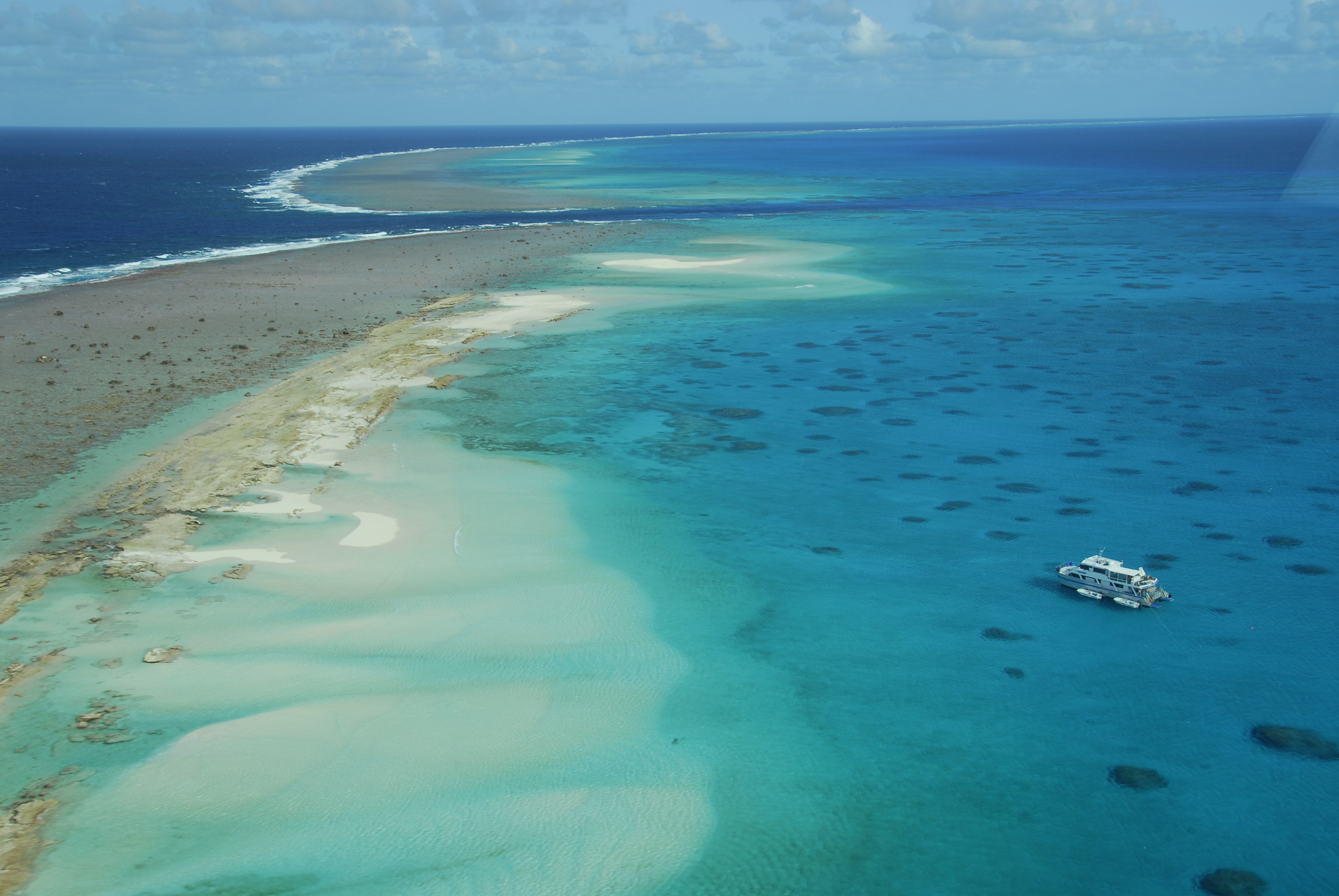 Just back from two weeks of punishment at the hands of scores of big GTs in the Coral Sea.

I know you’ve caught them before but if I had to describe GTs to a newcomer, it would be as a combination of a monster truck or World Rally Car, and some sort of ballistic missile. We saw literally hundreds of them attack our poppers over the week, and each of us landed dozens. I don’t remember even seeing any under 35 lbs, and fish of 50 and 60lbs were routine. On the first day my lure was charged by a GT so broad in the shoulder you could have saddled it and Alex our guide refused even to guess its weight. This is the land of hundred pound plus fish. 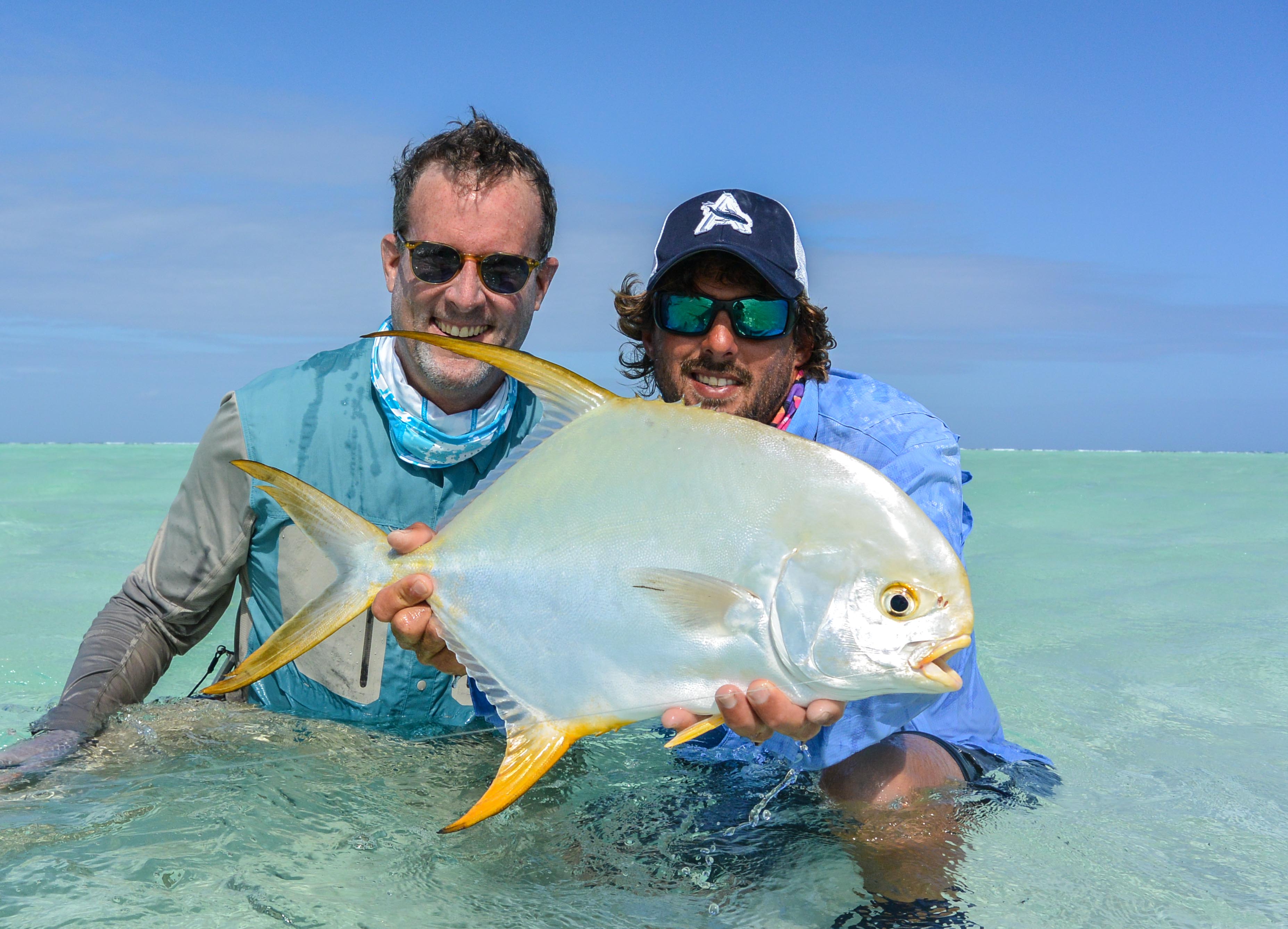 Nomad run a very professional outfit. You emerge each morning well fed and rested and confident in the abilities of that day’s guide to put you on the fish.

GTs aren’t the only interest out there though. We saw the flashes of dog tooth tuna six feet long at the lures, and time and again 30-50lb Spanish Mackerel would sky rocket 15 feet into the air after hitting the popper. Even the locally unsoughtafter shark mackerel- again of 30lbs and more- brought real excitement among the GTs. Trips between reef edges were punctuated by foaming waves of mack tuna in a feeding frenzy, or the elegant greyhounding long tail tuna (mostly around the 20-30lb mark) which were a joy to catch on lighter tackle and surface stick baits. We caught Long Toms (Needlefish) as long as I am; sharks of various hues; snapper; chinamen (that’s what they told me they were called) and emperors. 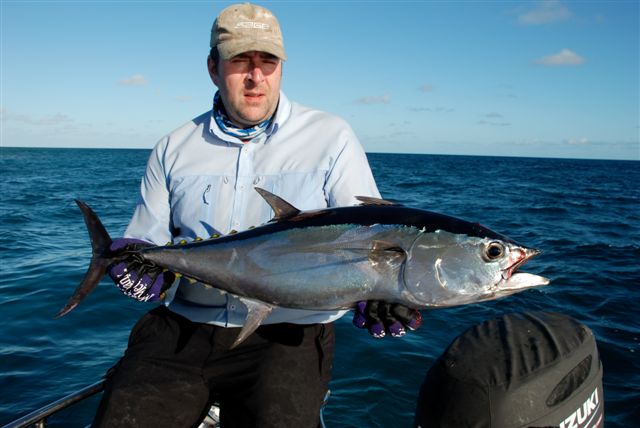 Under the mothership each evening were pods of GTs and sharks, even squid. ON the last day a 600lb potato cod (like a goliath grouper) lumbered into view in the crystal depths.

Advice for anglers heading there?
• Take two nights on Hamilton Island on the way out. That’ll purge the jet lag and let you enjoy the fishing from the start
• Don’t get carried away with buying giant 200g poppers. Nomad have their own made at 100-150g and these will save you (and your elbows) a lot of effort.
• Sebile lures are good but much more expensive in Australia than they are here so stock up on stick baits before you go.
• I took my own tackle but the gear provided by Nomad is all good stuff. Yamaga rods and Shimano Stellas and Twinpower (on the lighter rods). All new and well maintained. You could step off the floatplane without so much as a split ring and Nomad would make it work.
• When your guide suggests a light tackle interlude, take his advice. Non stop GT popping is hard work.
• As with most tropical locations, the sun is a serious issue. Full gloves, long sleeves, caps and a Buff are the uniform.
• A trip or two to the gym before you go will pay dividends. This trip makes a week catching tarpon will seems like a trip to the spa in comparison.

Thanks again for all the arrangements. The whole trip was superb.