St Brandons atoll once again showed why it is considered to be the finest Bonefish destinations on the planet. Joining us for the week were artist and general legend Jeff Currier and friends Scott and Ben Smith, St Brandon’s regular Andrew Veglio, world renowned sculptor Chris Bladen, new friends Andrew and Matthew Topman and Gerhard Laubscher aka The Boss. After arriving at the guesthouse and settling in the group tackled up. Gerhard took Ben for a walk around the island and immediately found a small shoal of tailing Permit just 100 yards from the lodge! Ben made a couple of great casts but didn’t hookup. This was Ben’s first trip to the Indian Ocean, he had heard all about the fabled yellow Permit but never imagined that the first fish he would see and cast at would be on e of them! This set the stage for the rest of the week and the group was really excited when news about the Permit on our doorstep came out over dinner! 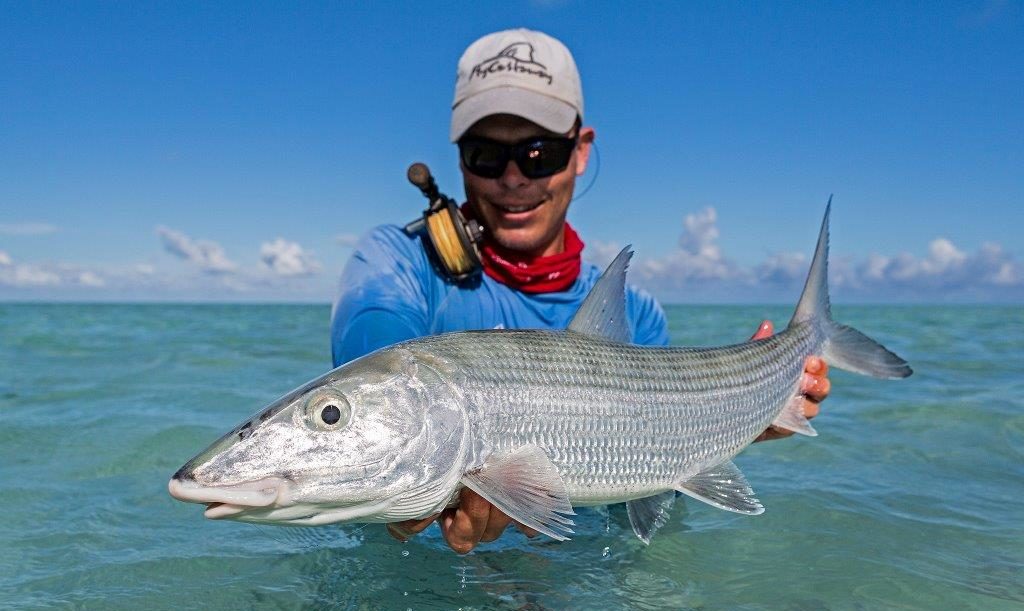 We enjoyed some superb weather on Day One with the guests capitalising on some solid Bonefish despite the warm water. It was a special day for Ben Smith and Andrew Topman each of whom caught their first ever Bonefish. Welcome to the club guys! Their excitement was contagious and got the rest of the team in high sprits. Scott Smith also had a day of firsts, although his with mixed feelings when he lost his first Indo-Pacific Permit but thankfully made up for it by landing his second. After losing the first a second was spotted soon after, slowly snaking across some marl onto a sandflat. Scott presented his fly one metre in front of the fish and with one strip the fish tailed hard on the fly and the hook was set. After a fight the fish was landed and Scott held a fin perfect 7.5 lb Permit in his hands. A few quick photos were taken and the fish was released. Each and every Permit is special but this one will no doubt not be forgotten in a hurry by Scott.  The warm water was still hanging around on Day Two, which  made our choice of flats and the eventual presentation more important than usual. 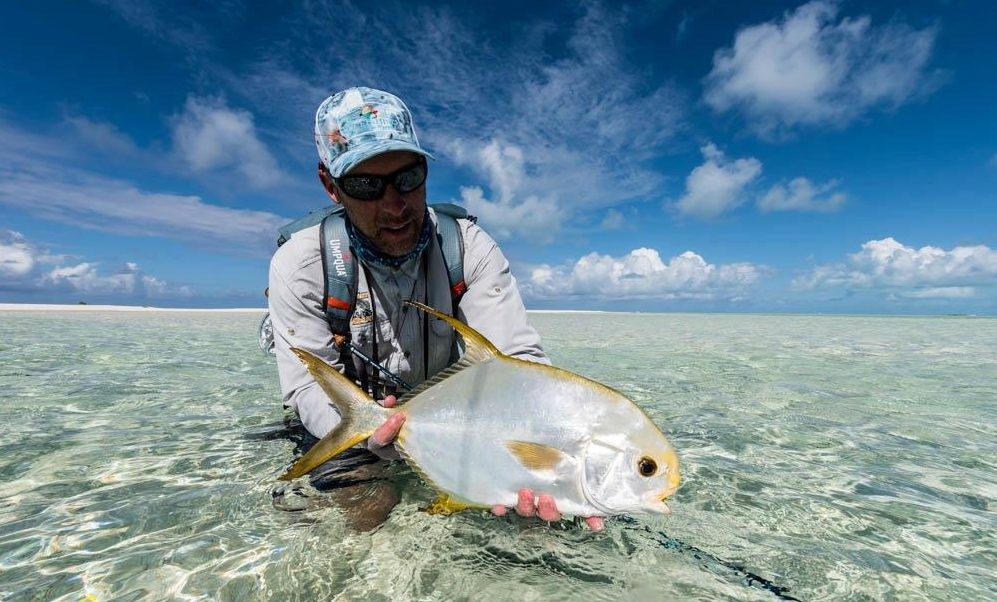 Nevertheless there was some excellent skinny water Bonefishing to be had during the day. Ben Smith caught a slab 9 lb fish that was spotted rooting around the shallows with its whole back out of the water. After a blur of white water and searing initial run which tore into the backing, Ben held his trophy with a smile that would last a few days. Jeff Currier who is a self proclaimed species junkie caught his first Yellow Dot Trevally and Green Spot Trevally. The guys also had a good number of
shots at some big Bluefin Trevally on the coral ridges. The fishing improved on Day Three with a good number of species landed. The guests enjoyed some exciting skinny water Bonefishing in the morning with good numbers of fish landed, finding the cooler water was certainly  the critical factor over the first three days. Andrew Topman and Ben Smith later both landed their first Yellow Dot Trevally while Jeff Currier landed a large Green Spot Trevally. Scott Smith got in on the action as well landing a solid 76cm Bluefin Trevally. However the highlights of the day were undoubtedly the two Permit landed, Ben Smith’s 7 lb fish being his first and Gerhard ’s 12 lb fish – our largest for the trip so far.  Ben spotted a shadow just off the edge of a turtle grass flat, sent out a perfect cast and as soon as he picked up the slack the fish was on. Gerhard landed his beautiful double digit fish despite a Noddy Tern getting in the way of his first casting. Staying calm he picked up the line and got the fly where it needed to be before getting picked up. A truly memorable fish! Shortly after landing the Permit Gerhard spotted two big Bluefin Trevally; he hooked one fish on his 9wt and as he was about to land it the second fish joined the first one and was very aggressive. Using his free hand Gerhard unclipped his 12# and slap ped the GT fly in-front of the second fish …the huge Bluefin surged forward and immediately ate the fly. He now had two fish hooked on two rods, a 12 lb fish on the 9# ready to be landed and a 17 lb+ fish heading for a coral garden on the 12#. Needless to say there was very little he could do – not having a free hand meant he couldn’t set the hook or tighten the drag or really do anything, how he thought he was going to land both fish no-one knows but it did make for a very funny action packed scene! Sadly about 20 yards into the backing the hook fell out and the big Bluefin was free. Gerhard focussed on the fish on the 9# landed a beautiful 12 lb Bluefin. If only that hook had stuck! 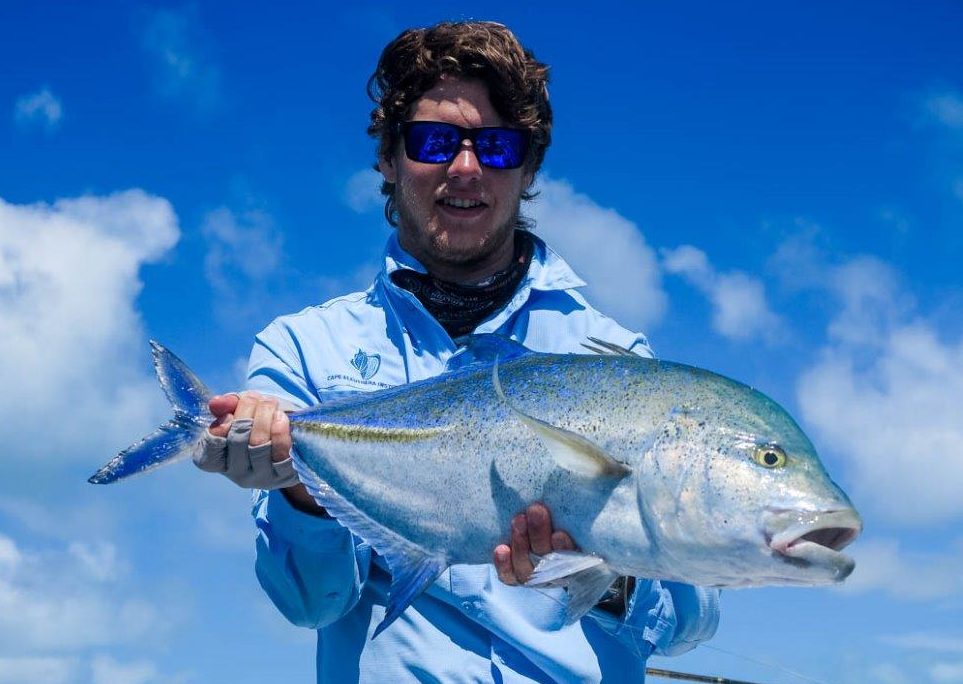 Day Four was a tough one, the warm water building up and limiting the fish to deep water. But St Brandon’s is no ordinary Bonefish venue and although the average sizes were not up around the usual 6 lb-8 lb mark, there were still decent numbers of 4 lb – 6 lb fish on some of the flats.We did encounter some big GTs and Bluefin during the day but sadly none of the fish committed to the fly. Chris had a monster size fish track his fly with an open mouth and he swears from where he was standing he could see that the fly was actually inside the huge fishes mouth! The giant fish never closed its mouth and as quickly as it happened it was over …if only it closed its mouth. Those are the moments that makes us do it again and again and no doubt Chris will be back one day to get that fish! 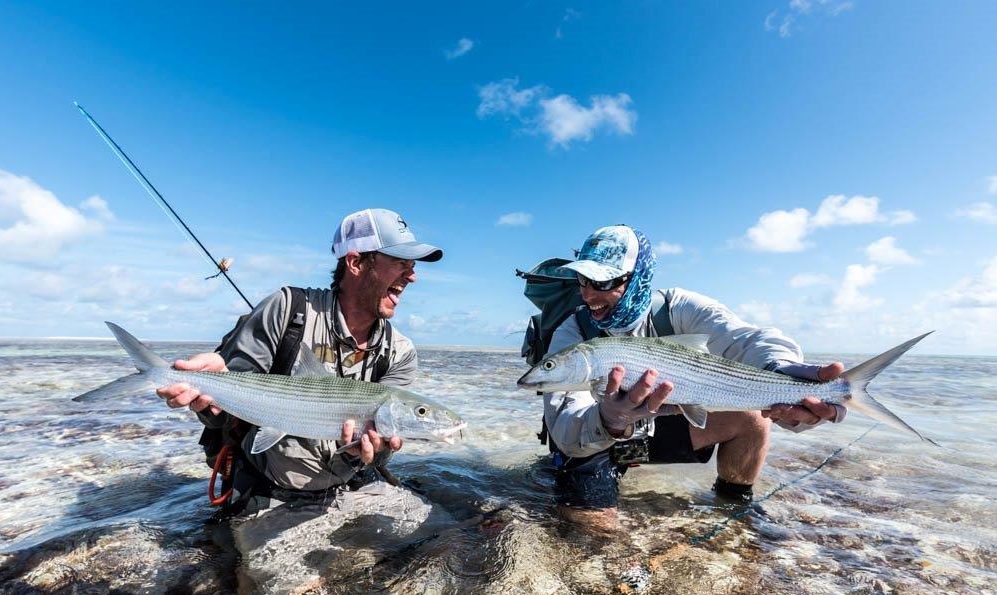 The Trevally action continued on Day Five with a good number of opportunities at some very large Giant Trevally. Although none of the chances were converted, we certainly had some heart stopping moments! Andrew Veglio did land a good-sized Golden Trevally of 65 cm. There was a good number of Bonefish landed throughout the day and most guys had shots at the elusive Permit. With the extremely warm conditions continuing into Day Six, finding cooler flats water was the order of the day. We moved our attention onto the eastern side and the rewards were quickly realised. Good numbers of 6lbs-7lb Bones were caught through the day, Ben Smith’s solid 8 lb fish the largest. The Permit were around in decent numbers but the right shots eluded us. We did enjoy some exciting Bluefin Trevally fishing, Jeff Currier’s large Bluefin on his 9wt being a real highlight.Day Seven and the wind just would not blow. The result being the warmest conditions of the week and subsequently the toughest fishing, most notably on the Bonefish front. Shots at Permit and GTs did present themselves but the flat conditions making getting close and getting the fly to them that much harder. Matt Topman did however get a great Bluefin Trevally which measured 66cm. 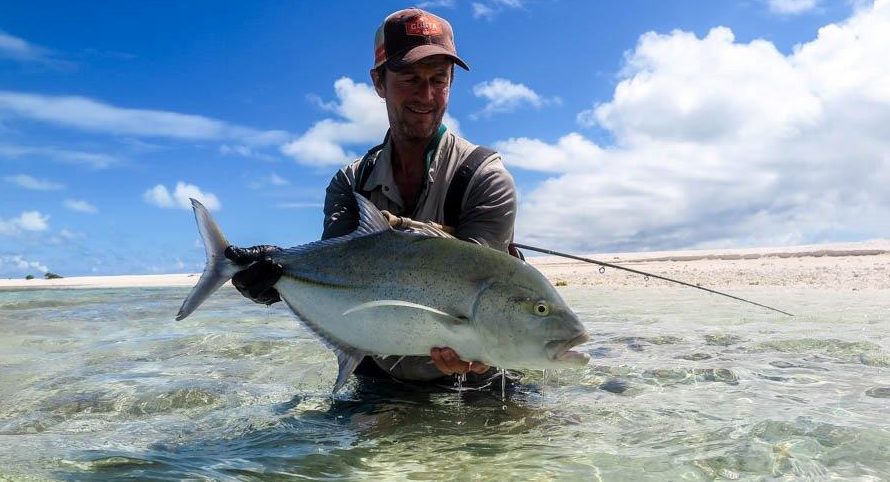 Thus closed our first trip of the season. The fishing was tricky and not quite up to the high standard St Brandon’s generally delivers, but it still provided some great sessions and memorable fish including three Permit! It also shows that even on a week like this which is below par the fishing is still exceptional by anyone’s standards and the reason we are so in love with this destination. Hopefully the wind picks up over the break, the flats getting that constant inflow of cool fresh water our fish
just thrive on.

Until Next Time
The St Brandon’s Guide Team