St Brandon’s atoll has kicked off in fine form, and the report from week two makes for great reading. Enjoy. 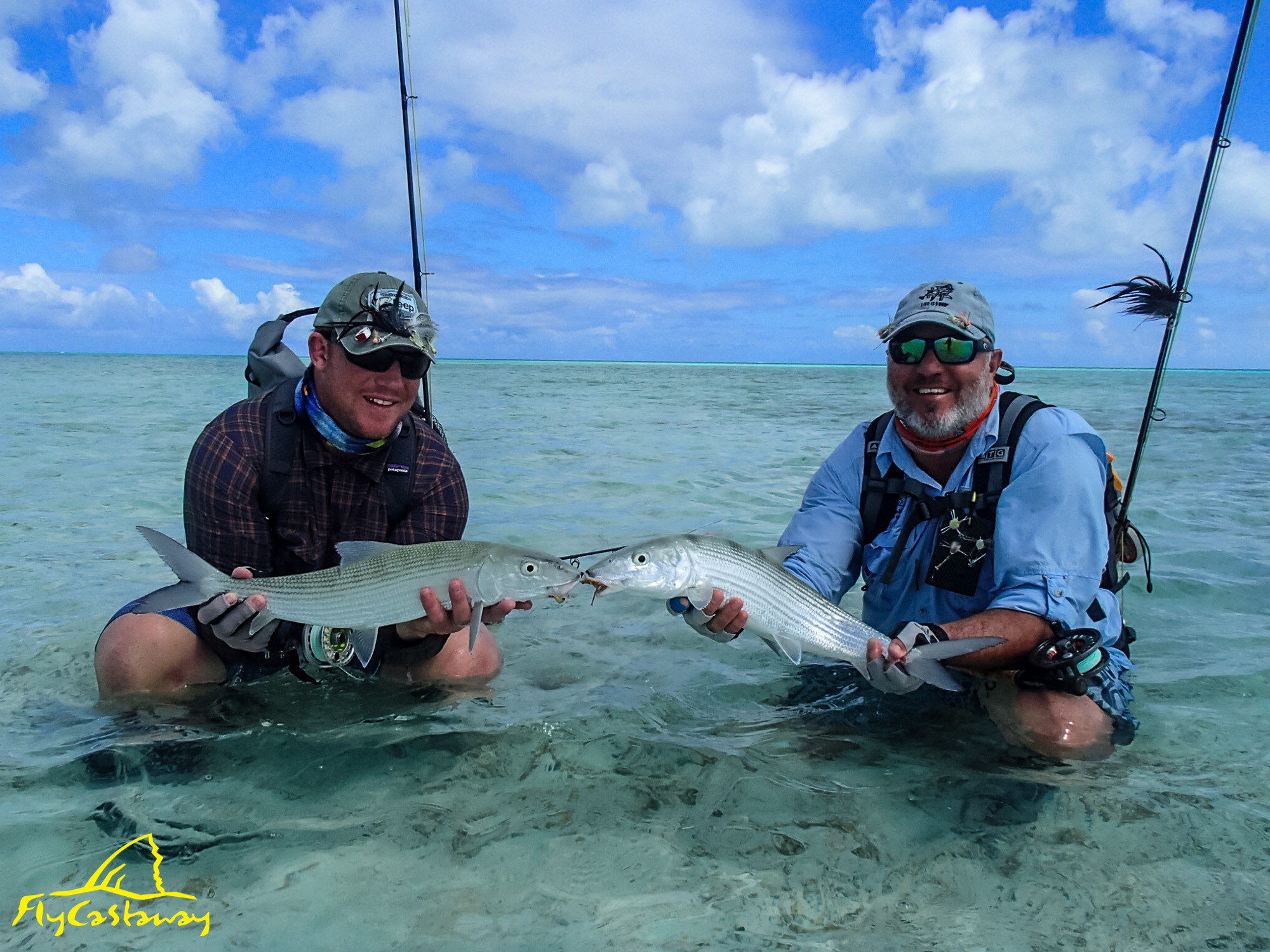 After a highly productive and enjoyable open trip of the season, we were eager to give our new guests an equally enjoyable experience on the atoll which consistently produces some of the finest wade fishing for Bonefish and Permit the world has to offer. Day 1 produced some outstanding Bonefishing with many good sized fish in shallow water coming to hand, whilst on the species front Matthew Clarke landed a solid 55cm Bluefin Trevally while fishing to some much larger specimens on a coral ridge in the east of the atoll. A few good-sized Golden Trevally were also landed and although no double digit Bones or Permit were landed our guest were in the swing of things and our week was off to a positive start. 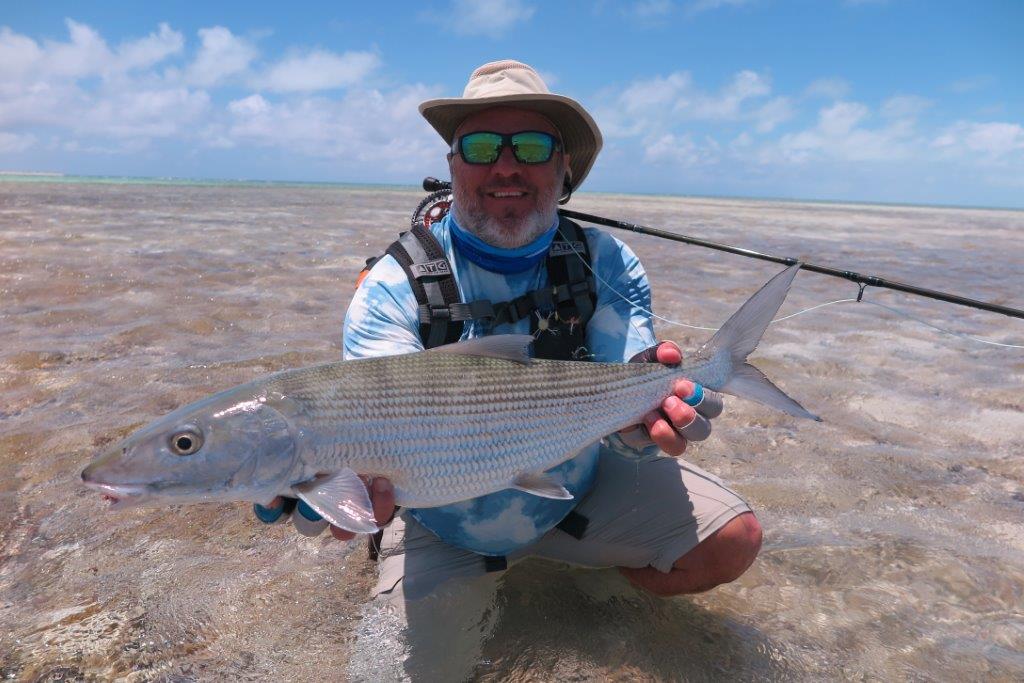 The excellent fishing continued on Day 2 with everyone getting stuck into a good number of fish averaging between 5-7lbs. Our fish are currently spread out across the atoll which provides guests and guides and multitude of flats and wading scenarios to target fish after fish which regularly see your backing knot exposed. Some of the other species came out to play as well, the Bluefin Trevally in particular found in high numbers with very impressive sizes. The GT’s are also starting to make more of an appearance and although none were landed their massive size ensured everyone secretly hoped to do battle with one of the St B monsters. Another great day in a very special place!

The Bonefishing on Day 3 continued in much the same manner, with everyone getting stuck into some solid fish throughout. On top of the Bonefish we also landed a few good-sized Bluefin Trevally and as luck would have it a rather large Yellow Lipped Emperor, a species that is never easy to land out here. Frikkie Botha landed a big Bluefin of 57cm that put up a very determined fight after it was found smashing into baitfish trapped against a coral ridge. 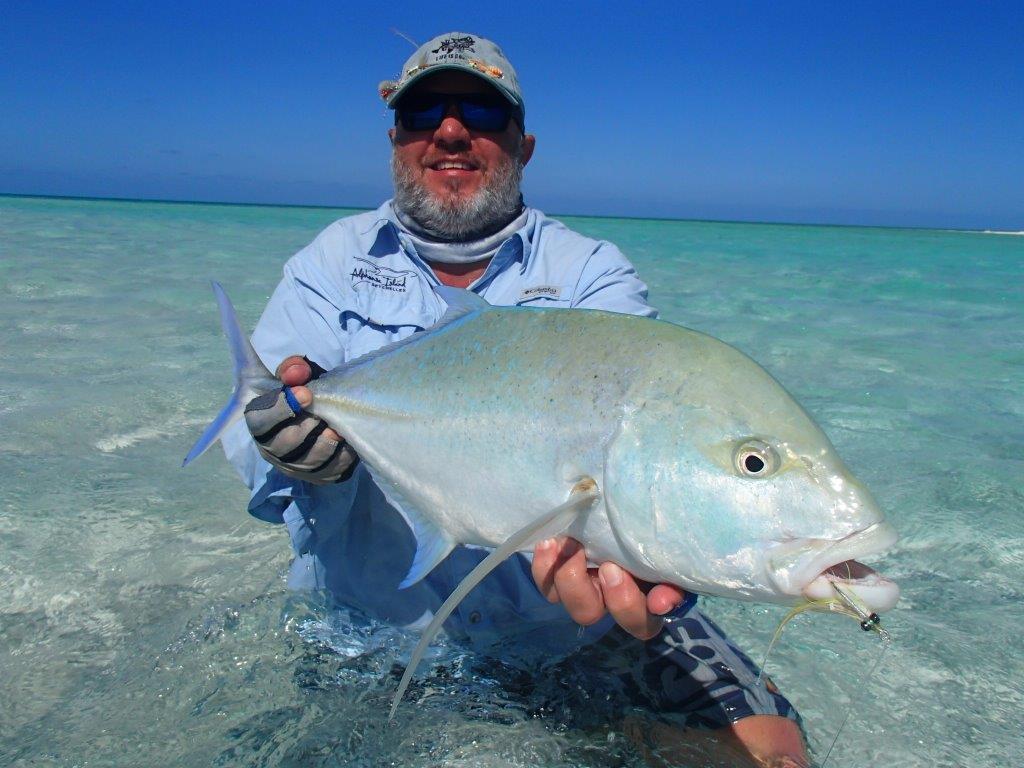 The day however went from strength to strength with Frikkie Maartens landing his first ever GT, a beautiful fish of 90cm. He spotted one very large black fish from a long way off and sprinted ahead of it to get the shot. He sent out a pinpoint cast but there were 2 other GTs behind the lead fish and after one long strip a fish broke off from the pack and smashed the fly. The fish proceeded to tear off into the distance with Frik in hot pursuit behind it. After a solid fight and a quick boat chase the fish was landed. Landing a GT on St. Brandon’s is never an easy thing to get right, so to do so on your first flats fishing trip is an unbelievable achievement. Well-done Frikkie! 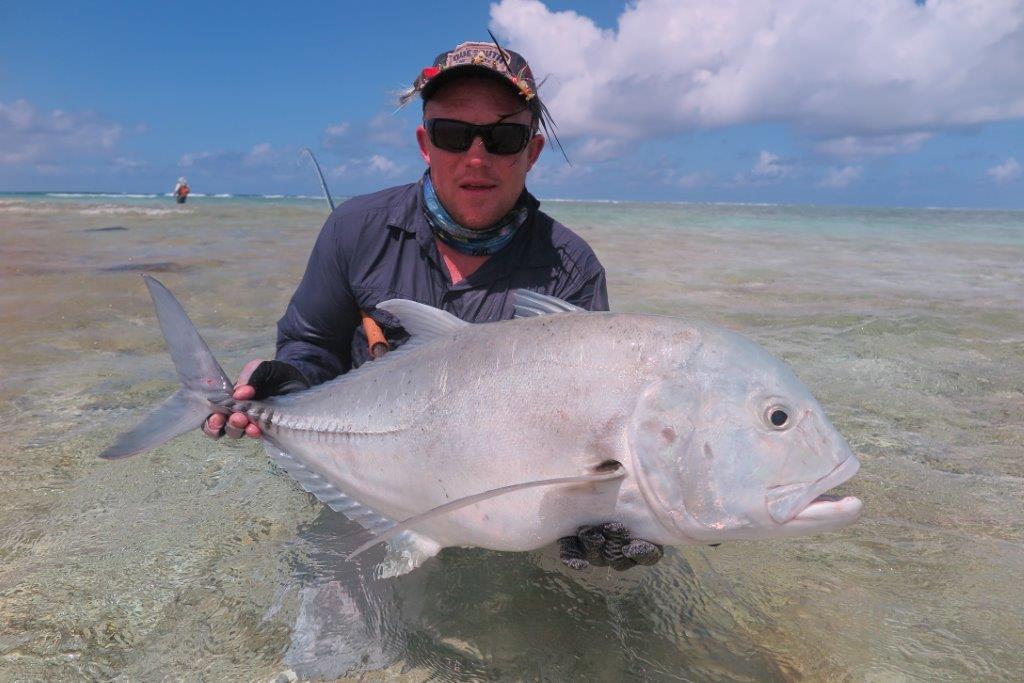 Day 4 brought with it some more variety. The superb Bonefishing continued with cold water pulling onto the flats keeping the fish happy and relaxed. A few Permit were spotted but the fish on this particular would day would not be fooled. Frikkie Maartens continued his good form from the day before and landed a 65cm Greenspot Trevally, a solid solid fish for the species. Some of other guests found a few tailing Golden Trevally scattered across the atoll, best of all these beautifully marked and charismatic fish were more than happy to eat a well presented fly. St Brandon’s once again reminded us that although the Bonefish are certainly the major target species, there is certainly enough diversity to keep you on the look out for something unique. 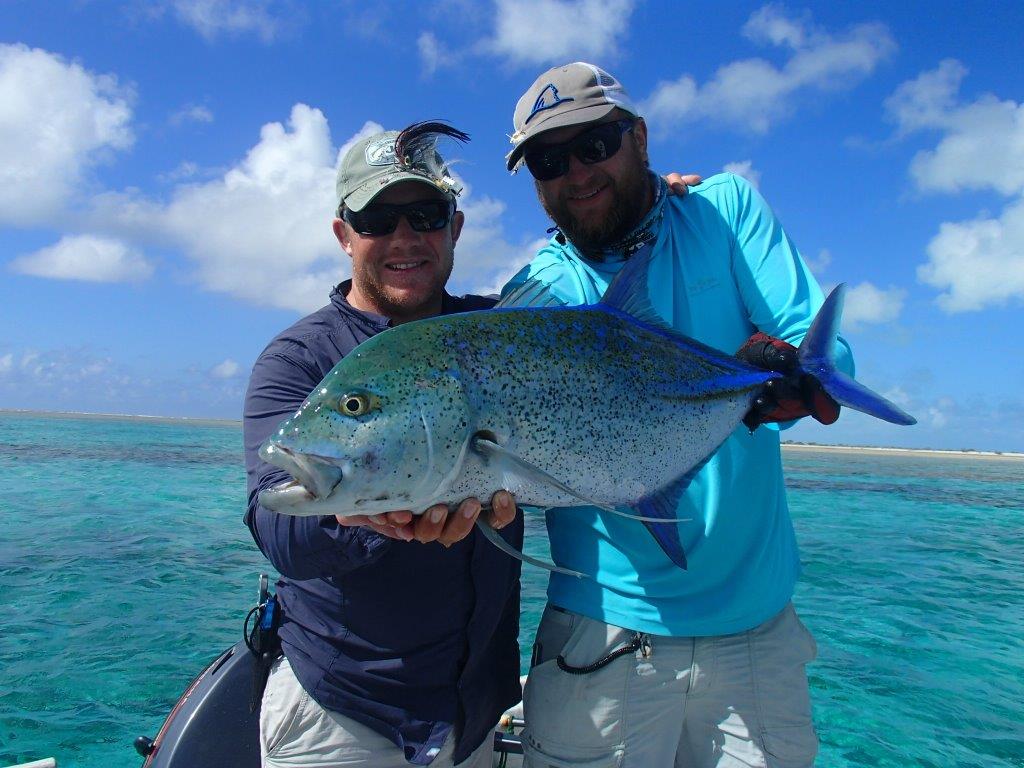 Day 5 was an action packed day. There were many bones landed, the fish averaging between 6-8lbs. Frikkie Maartens landed the largest fish of the day, a beast of a Bonefish tipping the scales at 9.5lbs. Matthew Clarke landed another solid 55cm Greenspot Trevally amongst some other very good sized Bluefin. GTs wise we are starting to see more and more fish, so despite no hook ups we are confident the next brute is just around the corner. More Permit were seen on Day 5 compared with any other day this week, however they continued to allude us. 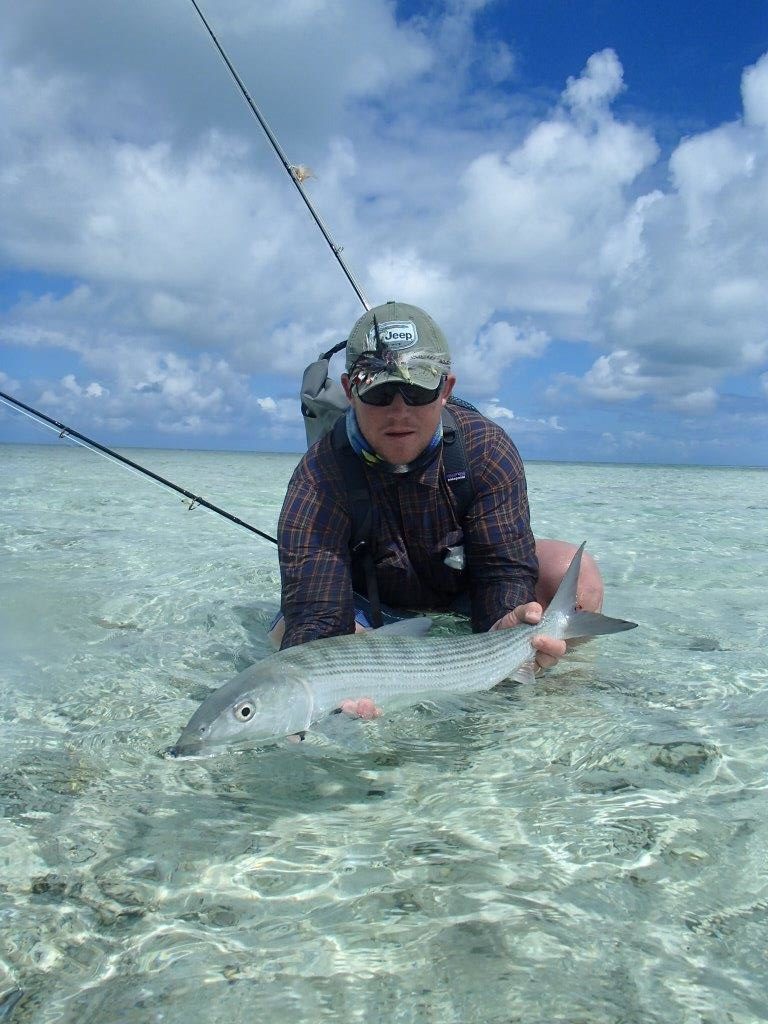 The cooler water was a bit harder to find on day 6 but there were still areas holding good concentrations of Bonefish, the patchy overcast conditions enticing some really big fish out onto the flats. With some warmer water around some big Bluefin were out a smashing the client’s flies. Jules Fantarella started his morning with a big 57cm Golden Trevally. He then upped the stakes with a 9.5lb Bonefish before landing the Biggest Bonefish of the week, a huge and powerful double-digit fish that did its best to run him into the coral on more than one occasion. A few quick photos were taken before Jules enjoyed a memory special moment not many anglers get to experience during a lifetime. What a fish Jules! 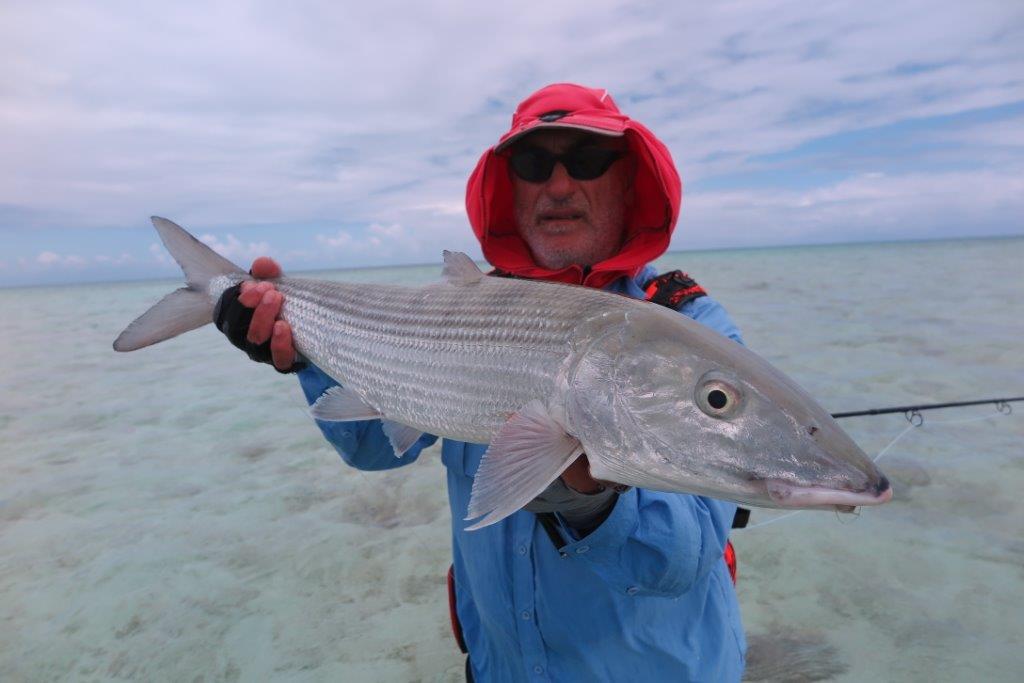 The 7th and final day was once again dominated by some outstanding Bonefishing. Many fish between 6-8lbs were caught whilst tailing in some super skinny water. It never gets old watching a seriously big Bonefish see the fly and crush it before tearing off into the distance as it feels the prick of the hook. The Golden Trevally once again made a their way onto the flats and along with the Bluefin Trevally they kept reels screaming. One of the groups also encountered one of the great sights St Brandon’s is known to produce. A shoal of some very large GTs were witnessed feeding on a school of terrified Bonefish and although we nearly had our second fish for the week, the fish decided to refuse the fly just feet away from the rod tip. 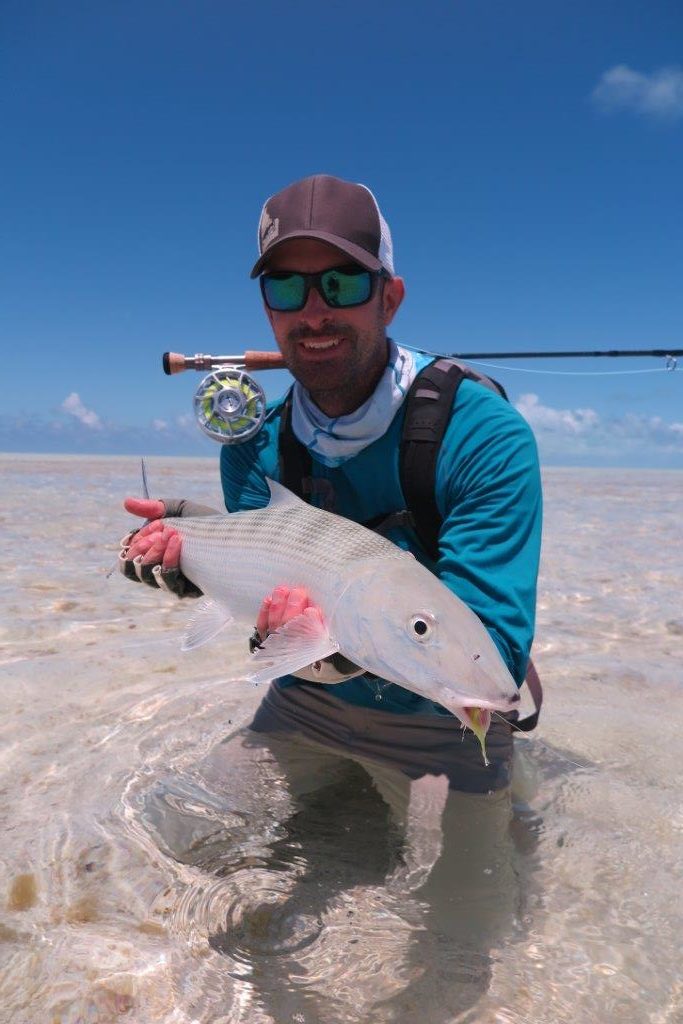 With the trip drawing to a close, guests and guides had a chance to reflect on the past week over a great final dinner. This was a group of people from all of over the globe who had never met before the trip, in the end though St Brandon’s left it’s mark not only with the incredible fishing it produced but also with it’s ability to draw some adventurous and incredibly nice human beings together. Thank you to each of you for a superb week, we enjoyed spending time with you immensely and hope to do it again soon.

Until next week, here’s to the tailing Bonefish, cunning Permit and monster Trevally that call this incredible place home! The St Brandon’s Guide Team

If you are interested in fishing St Brandon’s atoll please contact Charlotte Chilcott or call our office on +44(0)1980 847389. 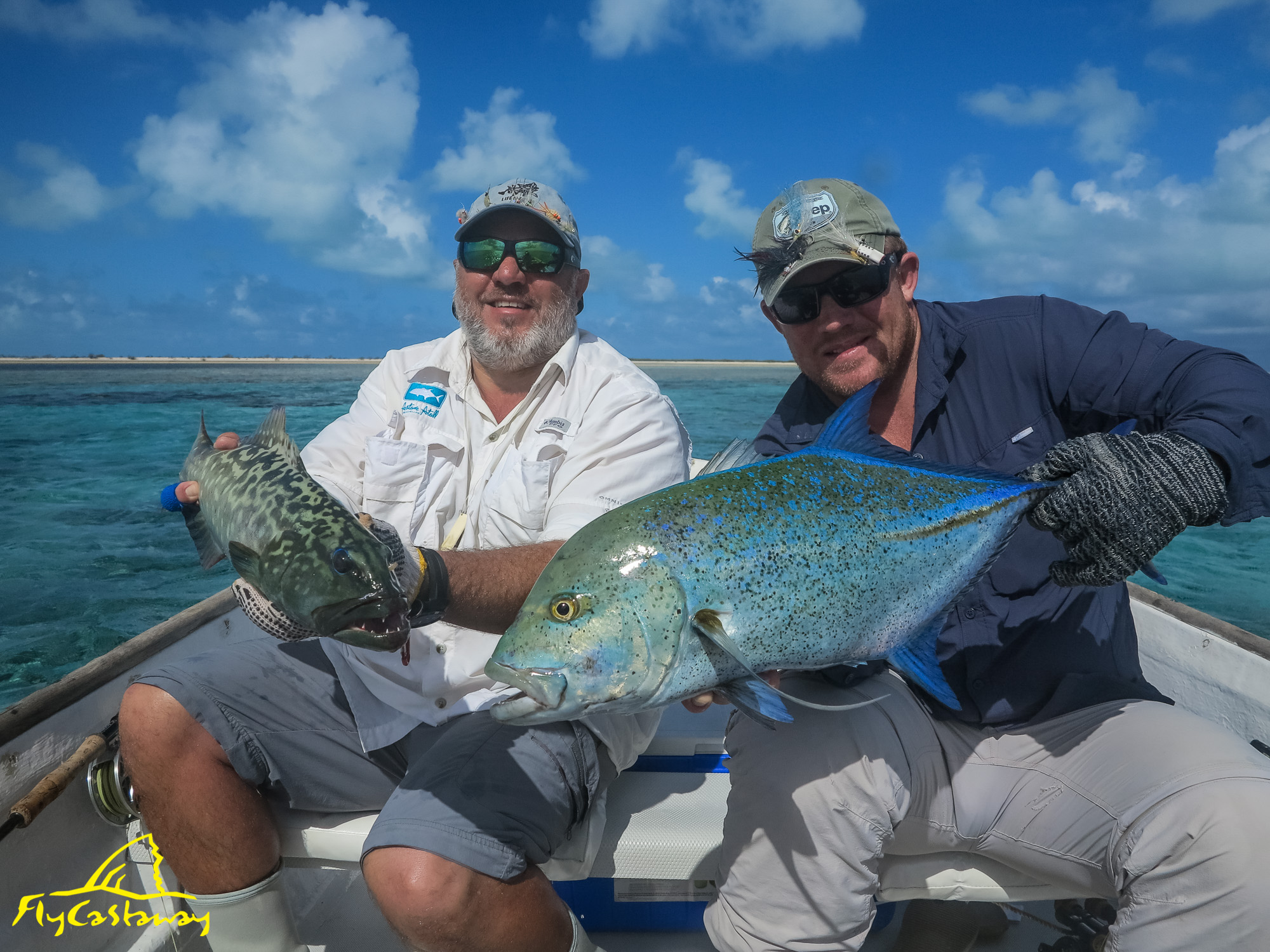