As I have mentioned before the Miramichi system is vast. There are essentially seven primary tributaries, and each one would take you years to learn and understand to the depth that the river guides here do. This is also discounting the Main Southwest Miramichi. On Sunday morning Axel Lerche , one of our partners at Salar Enterprises, arrived early to whisk Henry and I off to the Cains River. The Cains is one of the tributaries that has a reputation for its fall run. The mouth of the Cains is only a 15 minute drive from the lodge and not far from Blackville. A four wheel drive vehicle is absolutely essential as the access us up a logging road that heads of 70 Kilometres into the Bush. 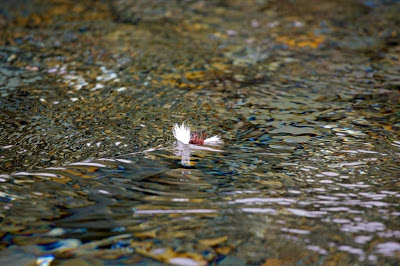 With Axel at the wheel we arrived in short order at Valentine Pool, and understood why everyone in New Brunswick drives around in a huge truck! The Cains is a beautiful little river, much smaller and more intimate than the main river and very much reminded me of many Scottish rivers I have fished in the past. The water is darker and more tea coloured than the main river, and this has made the strain of salmon originating here darker in appearance than those of other tributaries. The weather was not great, and constant rain made fishing a little tough. After the heat we had experienced over the days before though it was a little bit of a relief to be able to wear a wading jacket.

I started in at the head of the pool with a large orange bomber, and within four casts a sprightly cock fish rolled up and took it like a trout in a chalkstream…. I am really getting into this dry fly fishing for salmon, it is just awesome! He scrapped about a bit, but I subdued him with the 8 weight fairly quickly. He did make it into the backing though with his first run, and pulled hard. We fished another couple of pools on the Cains, rolled a few fish and saw more, but neither Axel and I managed to hook another. The problem with dry fly fishing is you have to be very quick on the strike, and as the line moves across the current sometimes this is not possible. 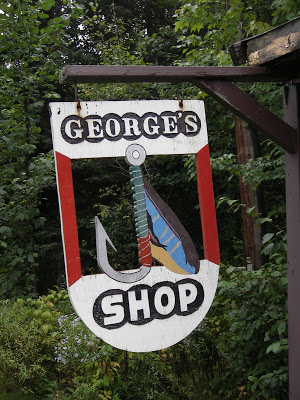 After lunch at the lodge the rain eased off and we drove the 30 minutes from Country Haven Lodge to the Upper Oxbow Lodge on the Little Southwest River. We stopped briefly at George’s Tackle shop, which is a little bit of Miramichi history. George used to tie flies for Ted Williams, and he still runs his shop out of a shed. As he is now over 80 it was great to chat to him. What a character, and boy did he have some stories! 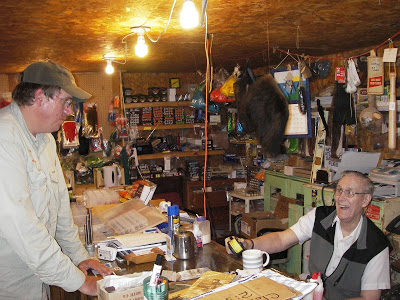 On arrival at Upper Oxbow we met Debbie and Dale Norton the owners, and Brett Silliker the head guide. Upper Oxbow is another fabulous lodge over looking the Little Southwest River. It has some wonderful rustic log cabins, but also a fabulous modern lodge complete with hotel style rooms, downstairs pool room and bar and a beautiful pool right in front of the lodge. From the lodge they access mostly the Little South West River and also the Sevogle Rivers. It was here that Brett planned to take us. 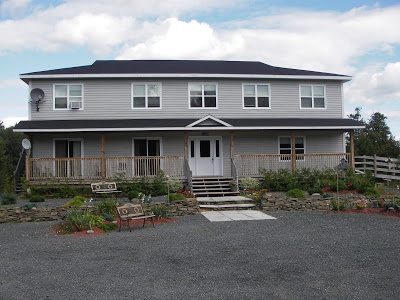 After a few derogatory comments about Axel’s Ford truck we piled into Brett’s Chevy Suburban and headed off into the woods along the logging trails. After beating our way through some thick undergrowth and on roads that only a truck like Brett’s could get to (and obviously not Axel’s Ford!) we arrived on the banks of the Little Sevogle. This river could not be further in character from the Main Southwest Miramichi. It is much smaller, easily fished with a single hander and runs through some staggering scenery and gorges. The first thing we did was peer off the edge of the cliff into the water and spot the salmon lying below. Always encouraging to see the fish before you start! 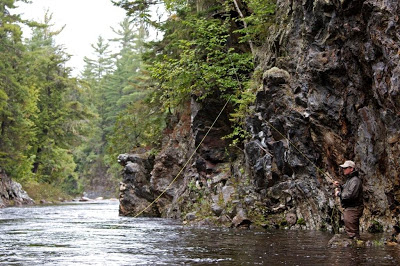 I clambered down the rocks and fished my way through the canyon, but could not make one of these fish move on Bomber, Green Machine and eventually a riffled hitch tube fly. Some time I hate salmon… Axel did roll another on a bomber a little above, but also failed to connect… tough day in the office. What an incredible place to fish though!