Our last full day we were once again to fish from Upper Oxbow Lodge with Brett. Brett wanted to take us quite a long way up the river, so we left Country Haven Lodge with Axel bright and early at 0600. Again, after some coffee and much chuntering about Ford trucks we unloaded into Brett’s Chevy and headed off. The light was just beginning to make it over the tops of the trees as we drove up the course of the Little Southwest. We left the main track and began to again crash through trees and undergrowth along a forgotten track than eventually popped us out on the banks of one of the most picturesque pools I have ever fished. 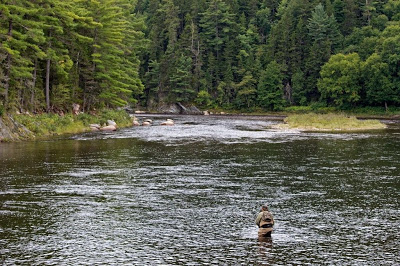 The pool is called Clelands, and is one of the most northerly pools on the river before the tributaries such as the North Pole Stream, and although it is a bit of struggle to reach is therefore not fished too much. To arrive on the fishing side we had to wade across the main river, which is a reasonably tough wade. This was made more so as we had to carry Axel’s Dog Jake across the river. We took it slowly, crossing as a group before starting fishing on the upper pool. There are some huge boulders strewn along the river, and like the Little Sevogle it has a mountainous surrounding which make it stunning. They also make the topography of the river bed full of large boulders, swirling water and lovely looking lies. Almost as soon as we arrived a couple of fish jumped near the main lie. 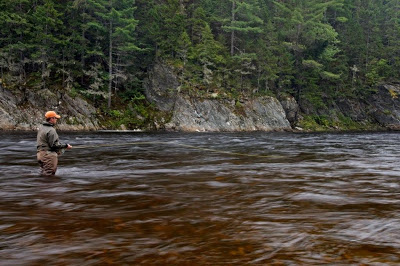 Axel and I both fished own the upper pool a couple of times with various patterns, but could not get a touch. Axel took Jake (his dog) and headed down to the lower section to try his luck with a bomber as I fished the upper pool once more with something a little larger. There was a yell from down stream that Axel had rolled a fish on the bomber, and he took up station like a heron in the middle of the river continuing to persevere with various sizes and colours of bomber. Brett took his leave and said he would start lunch up by the truck. He had a real treat for us, a moose fillet which he was going to cook on the BBQ. As the meat sizzled on the open flames the smell wafted down the river and had both Henry and I salivating.

Shaking it off I decided to move down and join Axel on the lower pool with the dry fly. I saw where the large boil ricochet off the boulder and began to surreptitiously plant my green butt bomber along the seam…. The sun split the cloud and as I moved down the seam the sun spilled across it. In that instant the fly disappeared in a boil and I struck. The fish immediately left the water and tail walked across the lie before tearing off down stream. I was fishing with the single hander Miramichi style, so this was interesting! The fish shook its head frantically trying to dislodge the irritation embedded in its jaw. I could see the fly was hooked squarely in the scissors, so for once I had been fast enough on the strike. 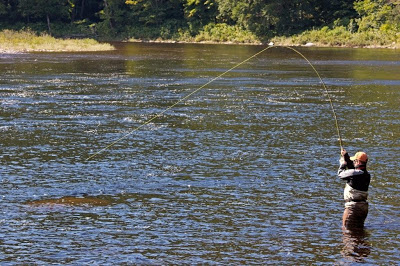 Finally after another couple of swirls and a hairy moment by the beach the fish came to hand and I grabbed the wrist and hand tailed it. Not a huge fish, but a very welcome grilse, and a good scrap on a single hander. We got a few photos and then quickly revived the fish in the current before carefully returning him. Nothing gives me more pleasure than watching them swim away, hopefully to go and add to his race. At that moment the car horn sounded and lunch was ready. The smell of moose was too much to take and we all made the wade across the stream…. including Jake. 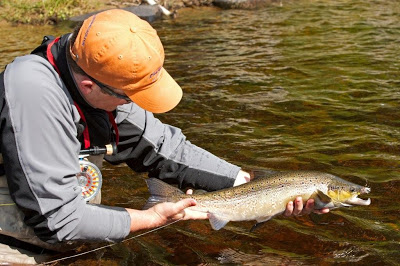 When we arrived at the truck it was obvious that Brett was a master of the stream side lunch. A table and chairs had been laid out with cutlery, the moose and vegetables were roasting on the BBQ and Brett offered us all cold drinks from the cooler. There is no messing around down here! Now Henry and I have been desperate to taste moose since we were here last year. Moose hunting is strictly controlled, and you can’t buy it. You have to either shoot one yourself having had a license in the local lottery, or been given some by someone that has. The meat is much leaner than beef, and we had heard so much about it. Well, we were not disappointed! Utterly delicious…. for those of us who like meat that is…. I was going to need help out of my waders! 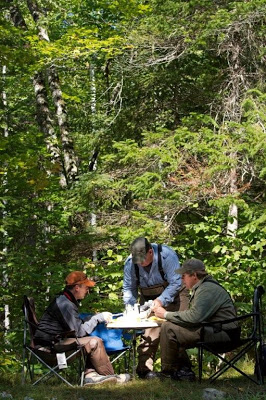 After lunch we fished one more pool before heading back to Country Haven for the afternoon session. Jeremy was waiting for us, and after saying goodbye to Axel who was heading home we went off to Brophy’s pool on the main river. I know I keep saying this, but this pool was absolutely stunning. The main river splits around an island here, and with the help of a small old style canoe Jeremy punted us across to the island. John and Pat Brophy were brothers who were both guides, and John guided on the Miramichi for over fifty years… yet more history to soak up. As I fished down the pool fish moved here and there betraying their presence, but yet again I failed to tempt a hook up. This was mostly accompanied by comments from Henry about a rubbish fisherman etc… I was kind of used to this by now… 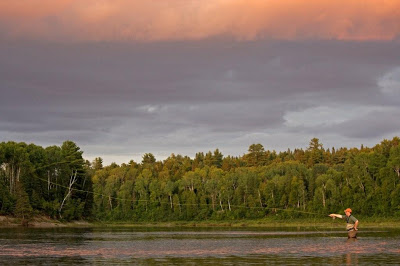 Salmon fishing is salmon fishing, but for me as the sun went down and I threw my last cast hoping to feel that shoulder jarring take I felt like I had really experienced something truly special. The Miramichi has a timeline and history all of its own completely independent of European salmon fishing stigma. Time to head home…..