As salmon fishermen will know, the search for the magical 30 lbs salmon can be a long one and a 40 lber is a fish of dreams. In Mongolia however, taimen of 30 and 40 lbs are encountered each year whilst these are monstrous fish they are a definite possibility to find, hook and land.

For many Mongolia may not even appear on the radar due to its remote nature and taimen being a relatively unknown species. However, Mongolia is a very accessible country and due to the hard work of our ground handlers and camp operators the experience here is as good as many of the best destinations around the world. The taimen themselves are a species that will excite salmon anglers and saltwater anglers alike with their unique behaviour. 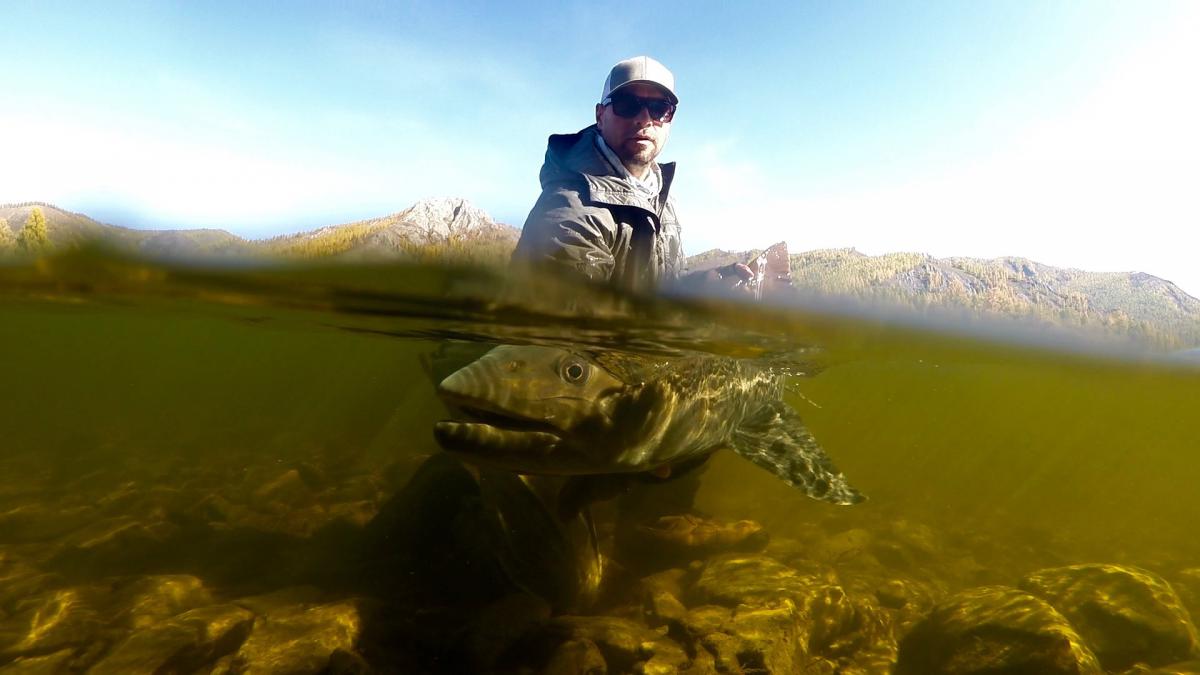 The taimen, as with other salmonids, spend the prime spring, summer and autumn months actively feeding before running the rivers to their spawning grounds and then settling in the deep holes for the long winters that grip Mongolia. It is during these feeding times that anglers can target them with great success.

Taimen are very active hunters and will often move between pools in search of food before settling back into their preferred lies in the deeper holes. Both hunting taimen and those lingering in the holes are possible to entice with flies. The best approach is to cover the water, much like in salmon fishing, with surface and subsurface flies cast between 90 and 45 degrees and allowed to swing across the current. Some flies also benefit from added movement.

The takes can range from the most exciting explosive cartwheeling surface hits to the smallest insignificant pluck as a subsurface baitfish imitation turns in the current. Both style of take can come from a smaller 5 – 10 lbs taimen right through to fish of 30 – 40 lbs and some even in excess of 60 lbs. 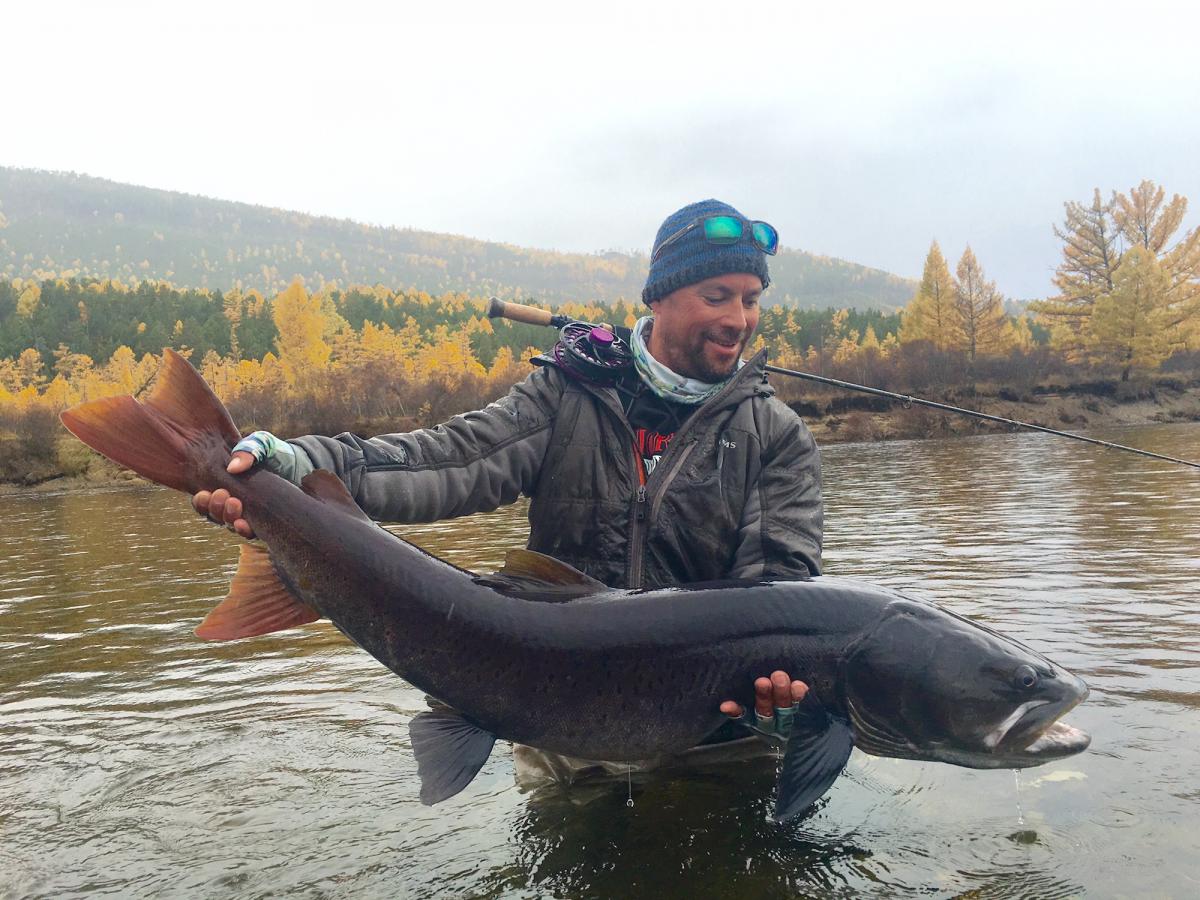 During my second visit to Mongolia in July 2016 I was blessed with a monster taimen. On the first day of the trip I had headed down to a beautiful clear and shallow run on the Delger River. Whilst not prime taimen water there were a couple of big boulders which could be spots for a passing taimen to sit in. After each cast and swing I took a few steps down until I was in a prime position to cover the slack behind a big rock mid-river.

I made the cast, the surface gurgler landing just past the rock. It first dragged up the current before zipping downstream through the slack. Without warning, the water erupted. A reddy-brown monster sprung from its lie and crashed through the surface. I watched as my skating dry fly disappeared from view. Just a second or so later I felt the line pull tight and all hell broke loose.

I could hear the calls from the guys behind, even at over 100 yards away they had seen the fish hit the fly. The taimen now cartwheeling across the surface then stuck its nose down and went on a searing run to the far back. Backing flew out of the rod and I was forced to follow. Keeping the pressure on full there were two or three occasions when I was convinced I was wrapped round a rock, but to my amazement this dead stop was purely the fish’s own power.

The guide by this point had joined me in the river with the net and was positioning himself to net the taimen. Each time the fish saw him it edged forward and a couple of times it made nerve-jangling head shakes on the surface. The guide, a dab hand with a net, picked his moment and under the fish and I watched as it folded safely into the net.

Bringing the fish into the shallows I stood, unable to speak, hands trembling just looking at this immense fish. A true predator, it had a large head for swallowing big food, a thick wrist and large powerful tail capable of propelling the fish at an alarming rate.

We measured the fish quickly, keeping him in the water except for a quick couple of photos and slid him back into the water. Watching as the red shape faded into the clear riffled river. The taimen measured an incredible 48 inches (123 cm) and we estimated it to be between 40 – 45 lbs, the equal camp record at the time (only to be beaten by a fish of 54 inches that same season).
Mongolia offers the most amazing fishing and cultural experience; We work with several operations in order to provide different experiences from physically demanding expedition style trips to more relaxed fixed camp set ups. 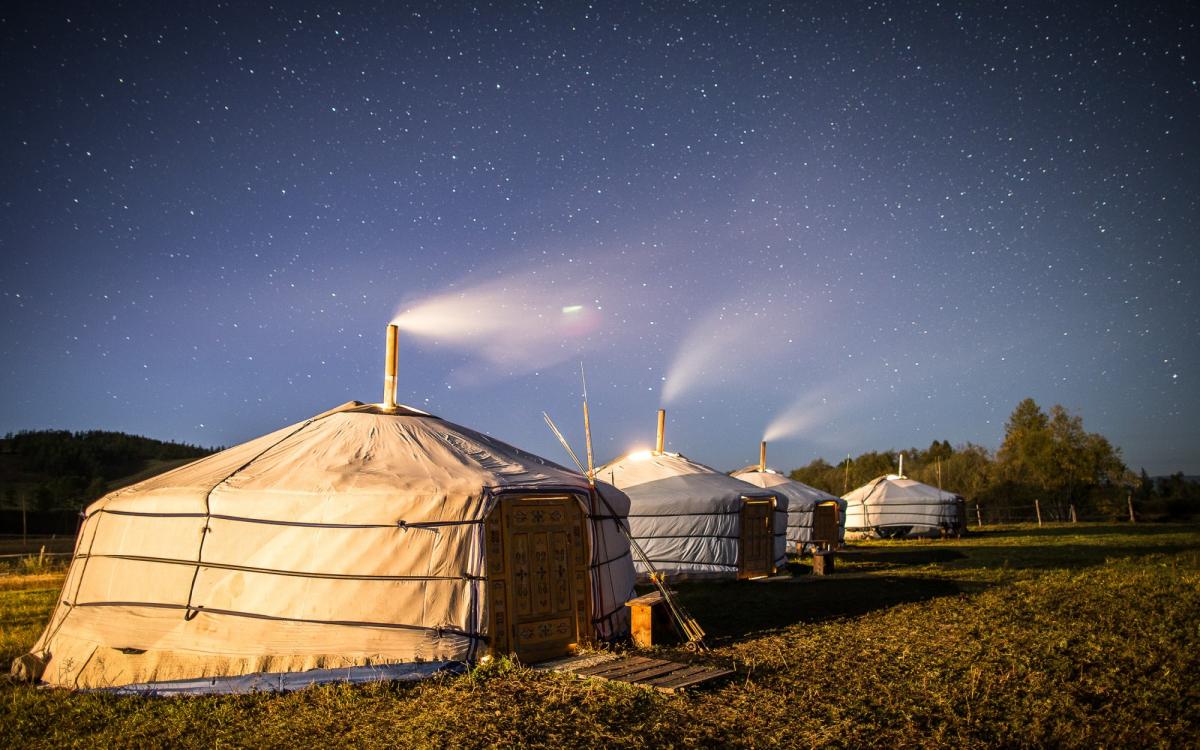 If you would like to catch the world’s largest trout species in a land that looks like Montana 150 years ago why not join my hosted trip in September 2017, read more HERE. It is a wonderful adventure filled with great people, great country, and most importantly, the world’s best taimen fishing.

For more information on Mongolia and available dates please do not hesitate to contact Alex Jardine or call our office on +44(0)1980 847389.