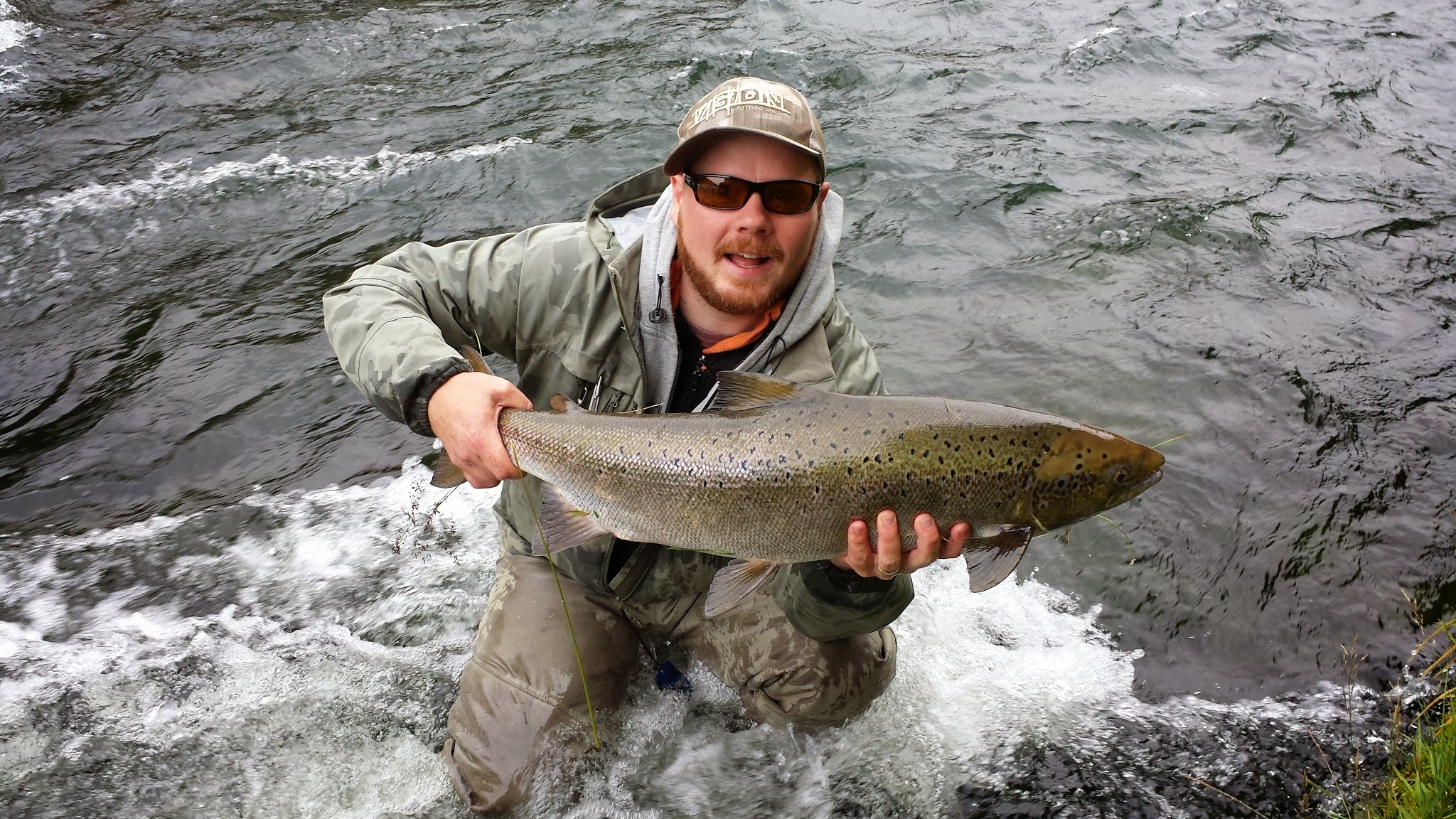 Mýrarkvísl is tributary of the Laxa I Adaldal on the north coast of Iceland and offers the perfect opportunity to have a private river system and lake for three to four rods combing brown trout, salmon and arctic char. It is an intimate river that holds a large head of brown trout along with a reasonable runs of good sized salmon through the summer. Mýrarkvísl flows across the Reykjaheiði plateau for the first 15 km making it perfect for dry fly fishing for trout. Further down the water course the river runs through a stunning canyon where it is often possible to see the fish you are targeting. The remaining 4 km meanders across the meadows by Laxamýri and into the Laxá in Aðaldal about 5km from the ocean. 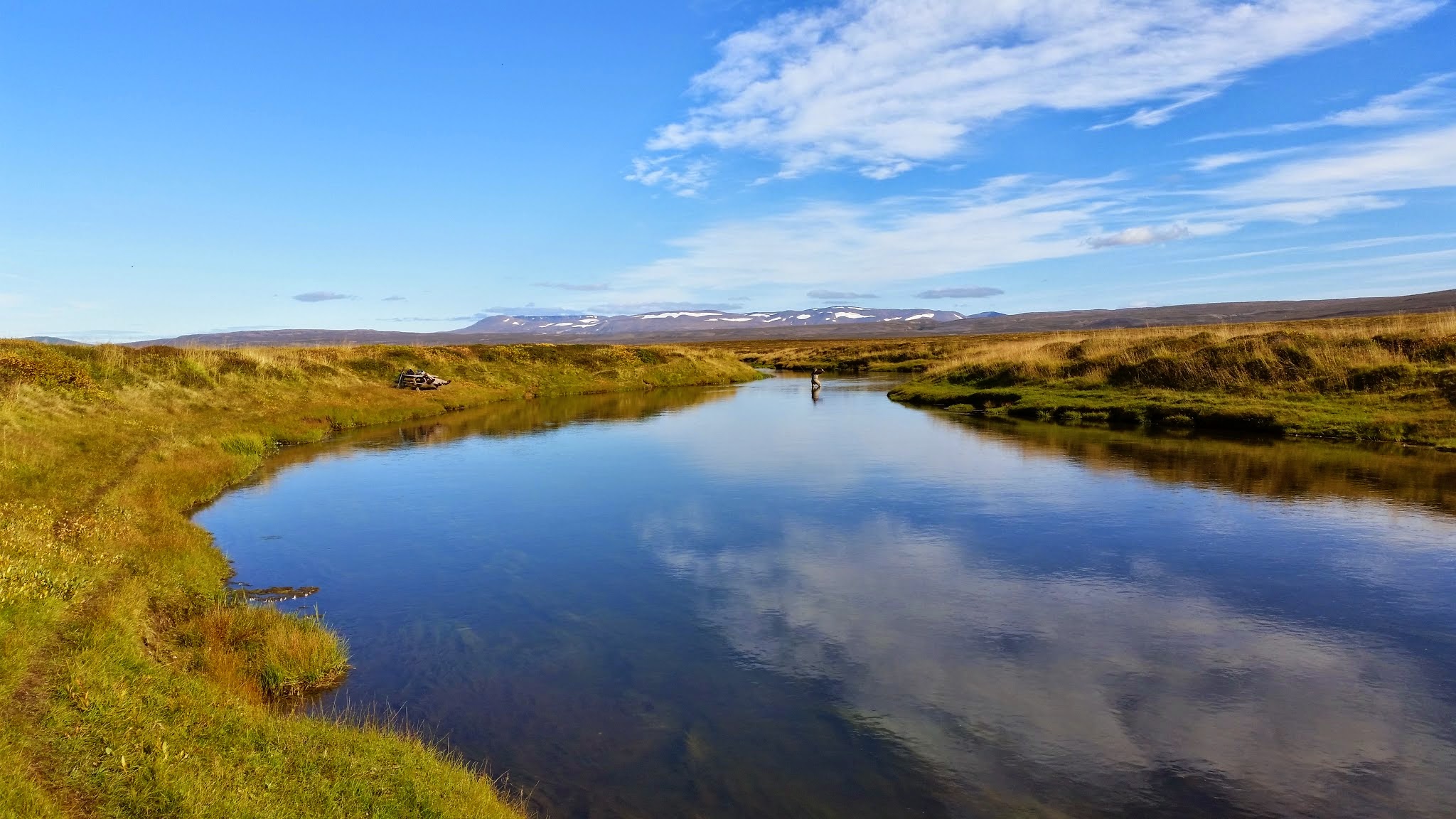 The fishing season starts on 1 June with brown trout fishing and at that time it is not unusual to catch 10-15 browns a day with a fairly good average size. Later in June the salmon start making their way in small numbers and these fish being Laxa I Adaldal stock have a large average size. In June the focus is mostly on brown trout so there are not many salmon caught then. The river has a unique character with such diversity of fishing there will always be something to entertain from casting a nymph or a dry fly on the upper section to a rising trout, or trying to winkle out a large salmon on the hitch in the canyon pools. In early July the focus begins to switch to salmon and through the middle of July the numbers begin to increase. 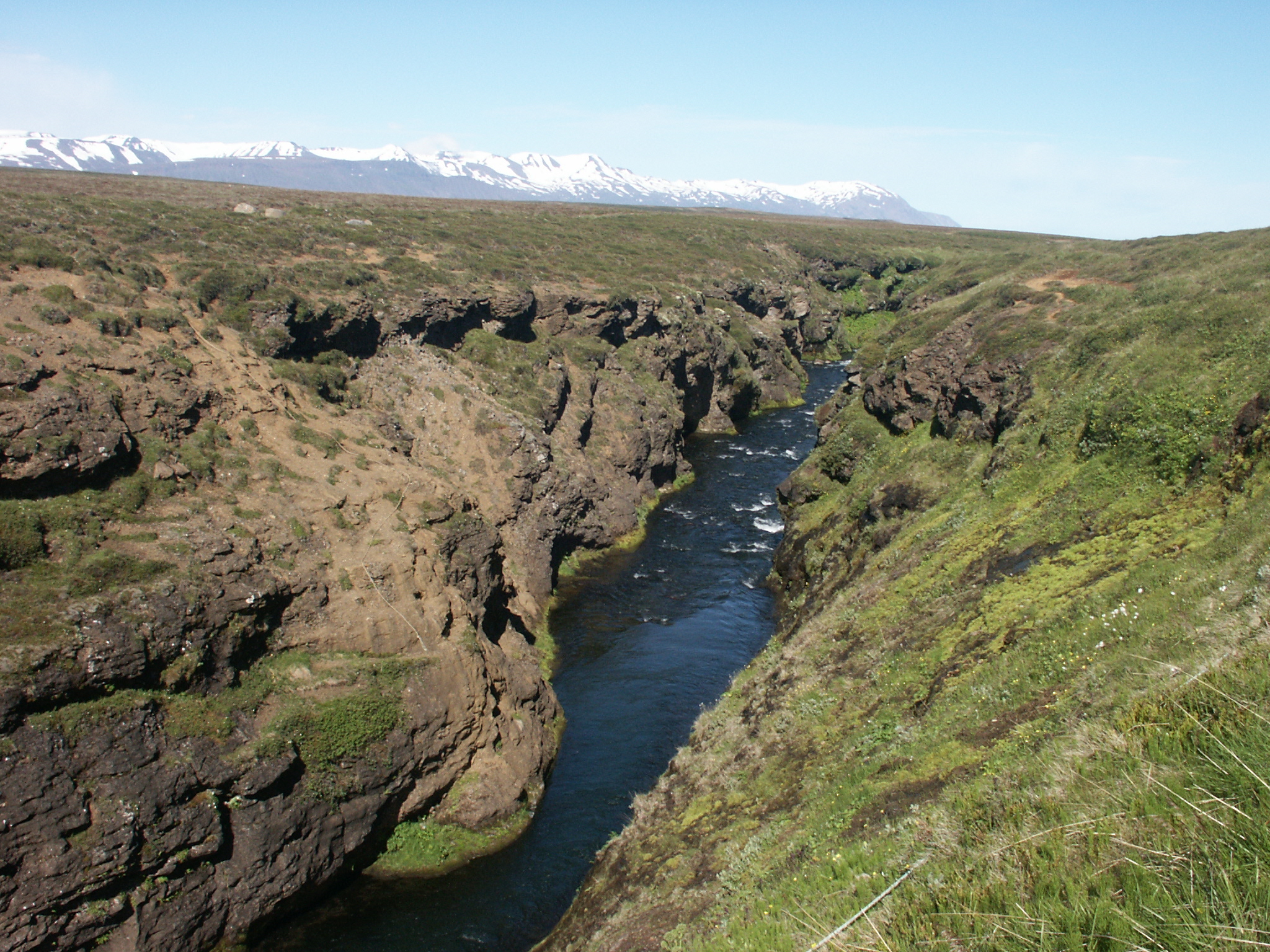 Primetime for salmon on Mýrarkvísl is mid–July throughout August. The river like many rivers in Iceland used to allow worming for salmon and as one would expect the numbers dropped off dramatically. The river was therefore closed to fishing for the 2013 season to try to help the stock recover.  In 2014 the river reopened with new leaseholders and the rules were changed to fly only and catch and release. The 2014 season saw the benefit of closure with the highest number of salmon being caught in the past five years.  Mýrarkvísl, like other rivers that are part of the Laxá tributaries has a high average size and some years a 50% of multi winter salmon. The average size in 2014 was 75cm or roughly 10lbs. 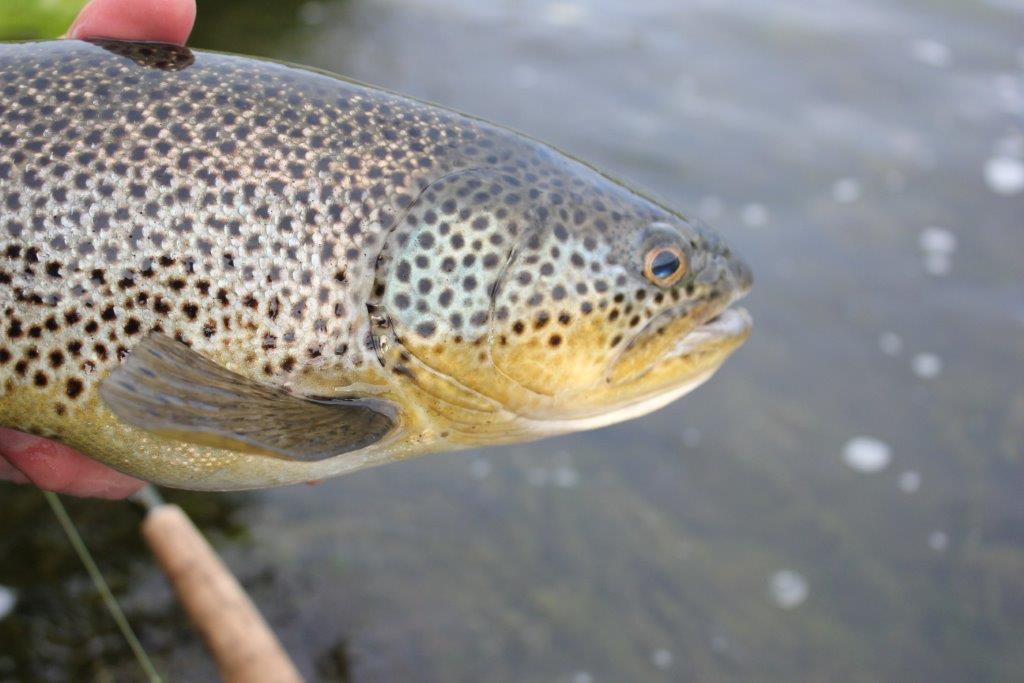 Fishing on the Langavatn lake is also included. The lake holds a large stock of small arctic char along with good size brown trout making it a great option for families. Along with the lake is the little river Geitafellsá that runs through meadows just by the lodge before ending up in the Langavatn lake. The river is small and not dissimilar to a chalkstream, perfect for dry fly fishing. In June and July anglers can expect to catch good size brown trout & from late July the arctic char from the lake start heading up river for spawning in great number. 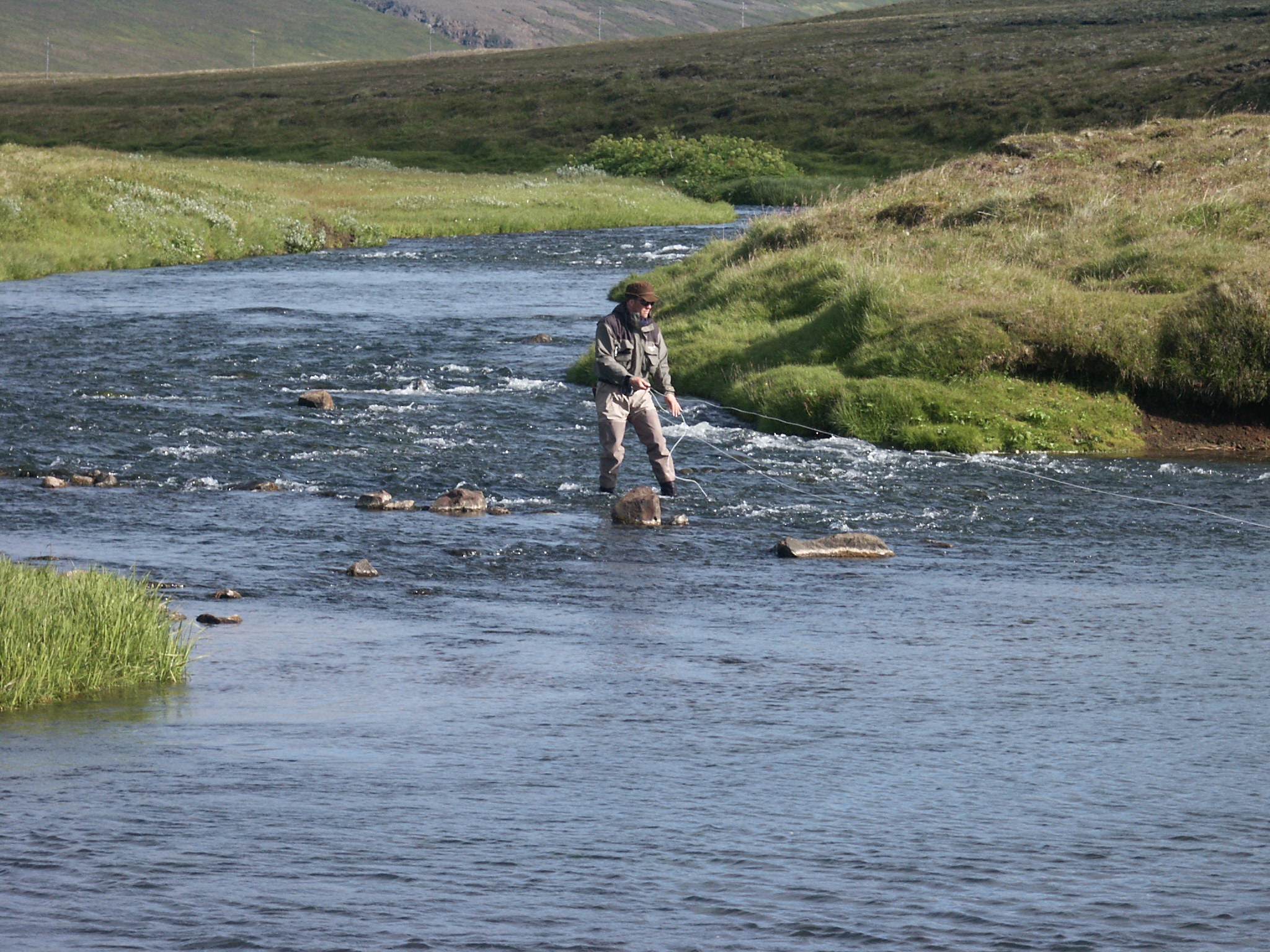 There are two accommodation options. The first is the Geitafell farm house offering self-catering accommodation with four bedrooms, bathroom, living room, shower and fully functional kitchen. Alternatively clients can stay at the fully catered Brekka guest house situated just down the road on the banks of the Adaldal.

The costs based on three rods will be £1,330 per rod self-catered or £1,660 per rod fully catered. These prices are inclusive of fishing licenses, accommodation and guiding. They do not include transfers, internal or international flights.