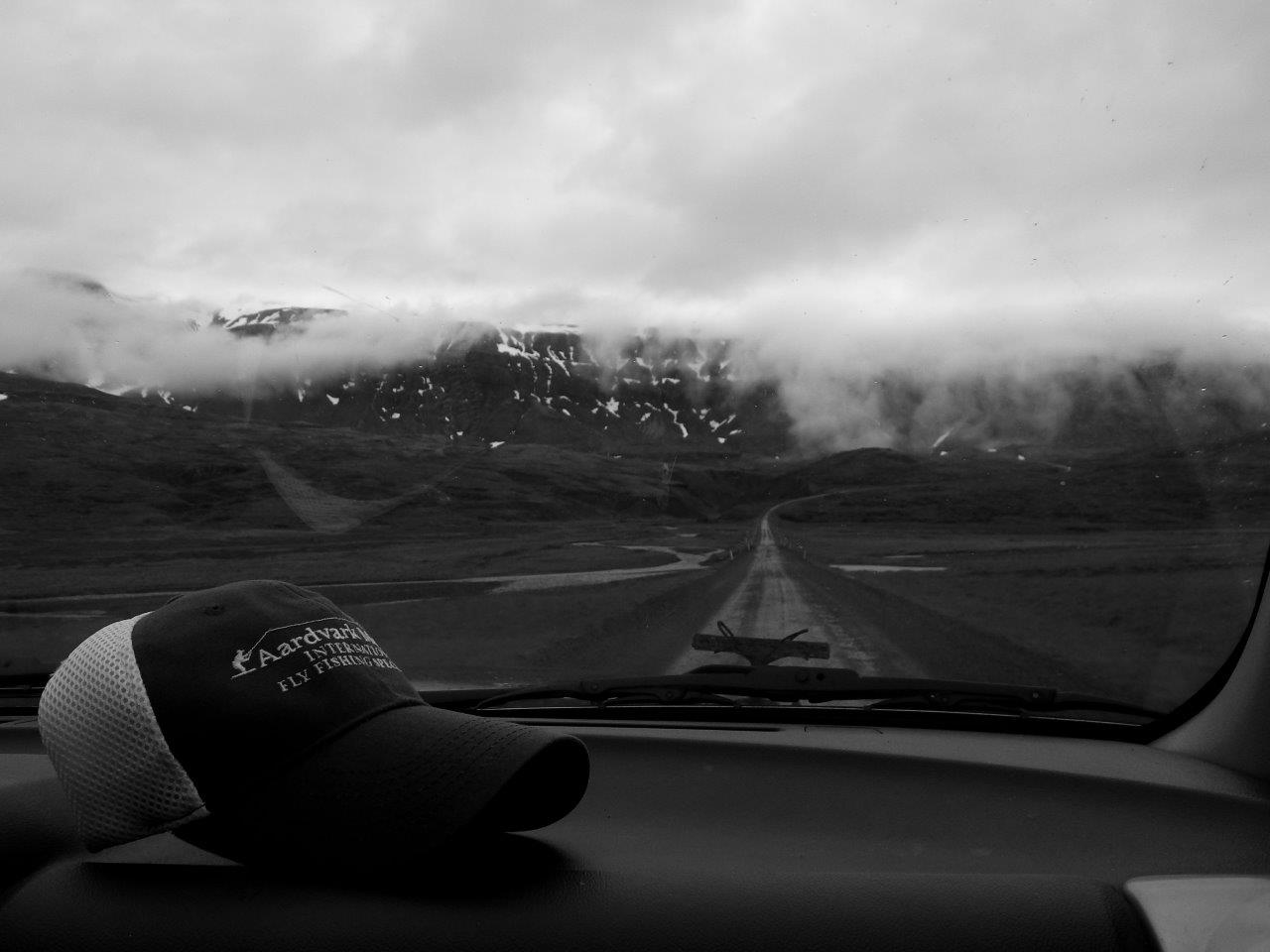 Each summer the allure of casting at large wild brownies has me tying flies furiously and cramming my bag full of various fishing kit. This summer was certainly no different except for packing an extra woolly jumper based on a chilly weather outlook.

First stop was to a small tributary of the Laxá í Adaldal called Mýrarkvísl. The river is the first tributary up from the tidal reaches to join the ‘Big Laxa’. Hidden in plain sight, the river flows right under the main road to Húsavík and boasts the same strains of big salmon and big trout as the main river. 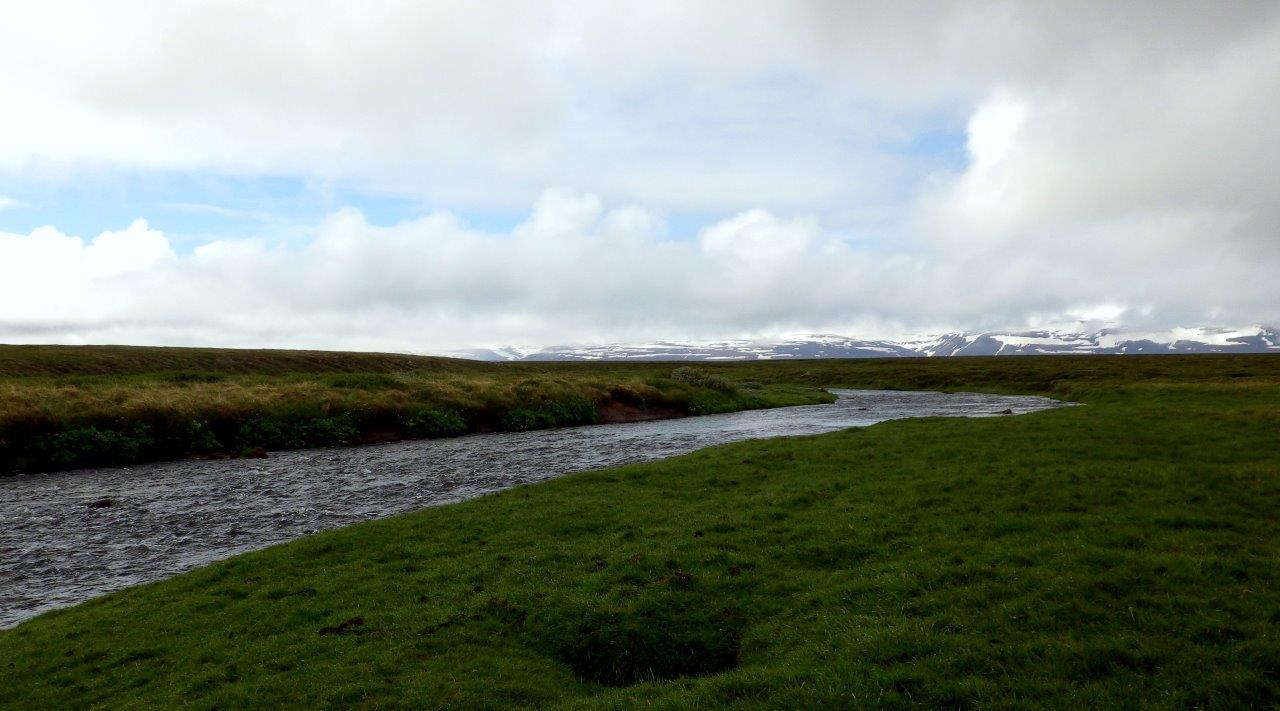 After a very nice lunch in the whale watching capital of Iceland, Húsavík, we strung up our rods and headed out to get our trip up and running. The weather conditions had fallen into the category; “there is no such thing as bad weather, just bad clothes”, so to begin with we headed to the Arctic char lake, Langavatn, at the top of the river.

Having never fished for lake char before this was to be a new experience for us and our guide Maddi gave us some excellent advice and off we went. The fishing was very similar to reservoir fishing in the UK, looking for drop-offs, structure and wind directions. Before long we found that traditional wet flies were a firm favourite of the small yet strong and vibrant coloured fish. Some liked to chase the flies and others preferred them on the drop but it was great to be up and running on the fish count so early on in the trip. 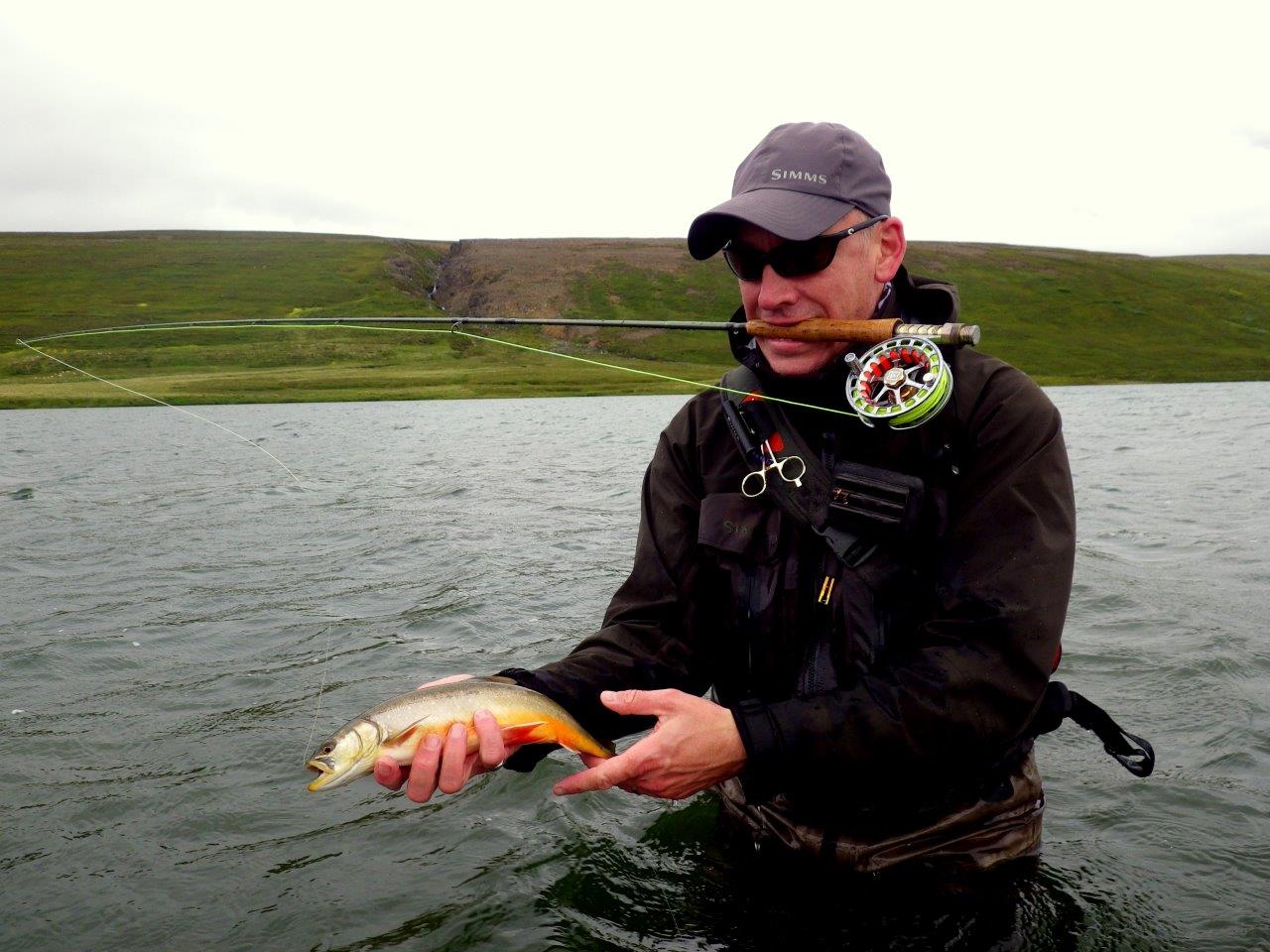 After an hour of constant action and a couple kept to barbeque later that evening we headed to the river. Our focus was on the upper section, known to hold good numbers of wild browns. The small and intimate river is similar to that found on moorlands, little in the way of bankside vegetation, tumbling runs and small rocky pools – perfect trout habitat.

Due to the cold and wet conditions we started out with ‘duo’ methods, a nymph trailing behind an indicator dry fly. It did not take long to locate the first couple of trout, they were a rich buttery golden brown colour and tore line from the reel in runs both up and downstream. True to form, these Icelandic brownies defied the less than favourable conditions and honed in on our dry flies. 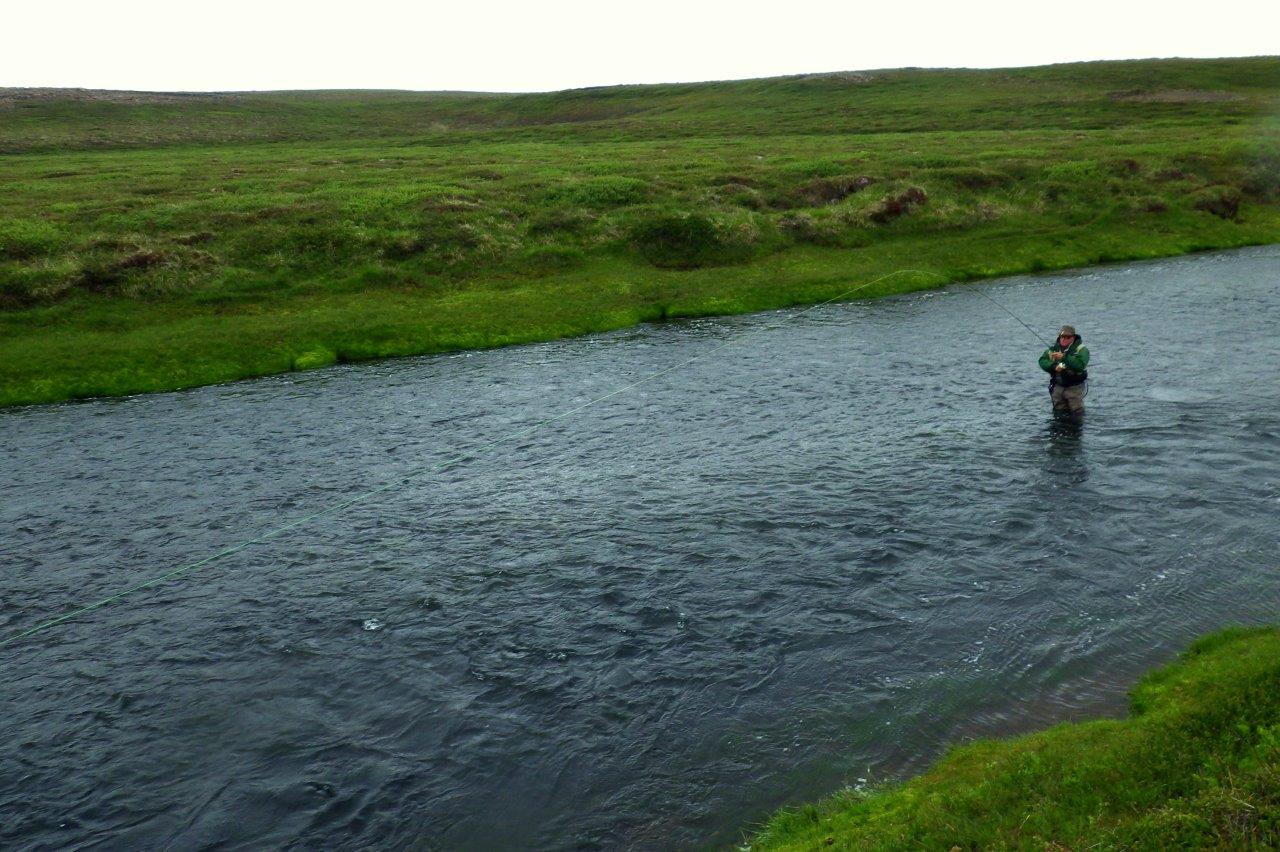 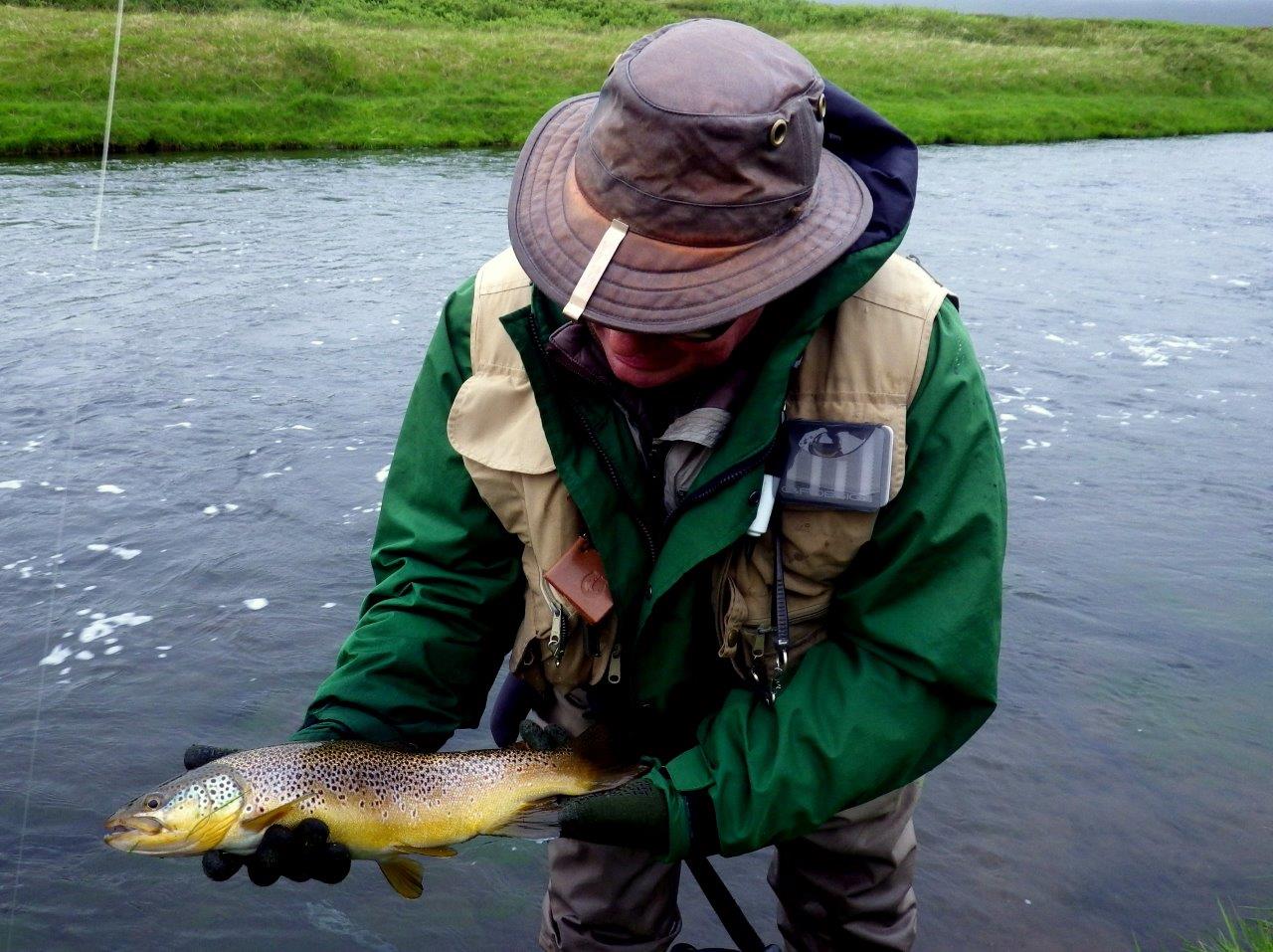 That evening we landed good numbers of fish between 40 and 45 cm (2 – 3 lbs), before Marcus located a beautiful 52 cm (4 lbs) brownie on a foam headed hopper. The fish was tucked up against a small cliff on a lovely sweeping pool. As the fly bobbed down the foam line, the rest of us watched from the bank, breath held, waiting for the imminent rise. Sure enough the fish obliged and swallowed the fly before heading off downstream. After a quick couple of pictures we decided to call it a night and head back to the warmth of our small lodge. 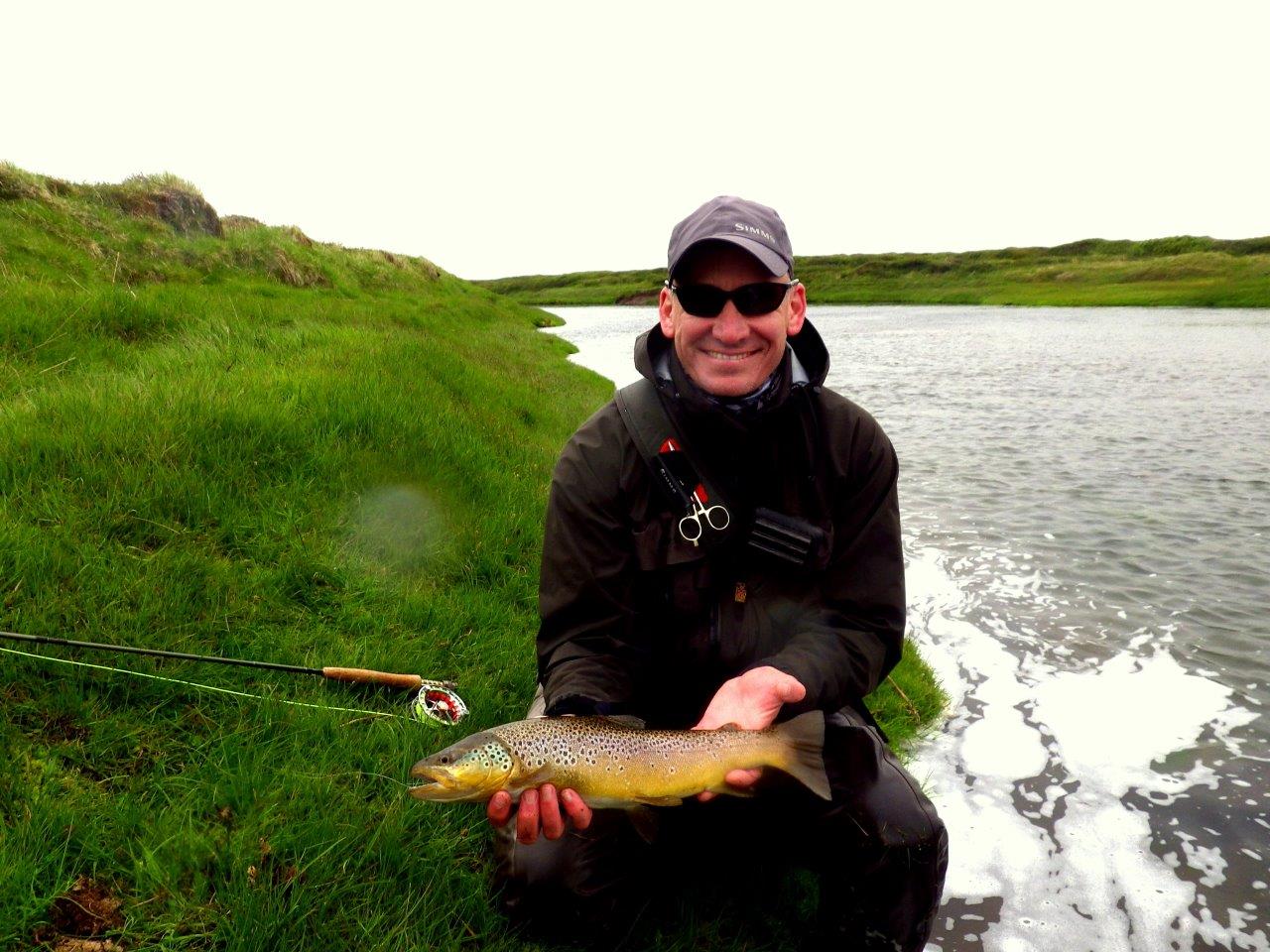 The following morning we headed to the lowest beat on the river, from here you can taste the salt on the air you are that close to the sea. This part of the river is a good place to intercept fresh salmon as they enter the river and also to locate some of the biggest trout on offer on Mýrarkvísl. While we did not find the salmon, Marcus once again found a good trout of 49 cm. 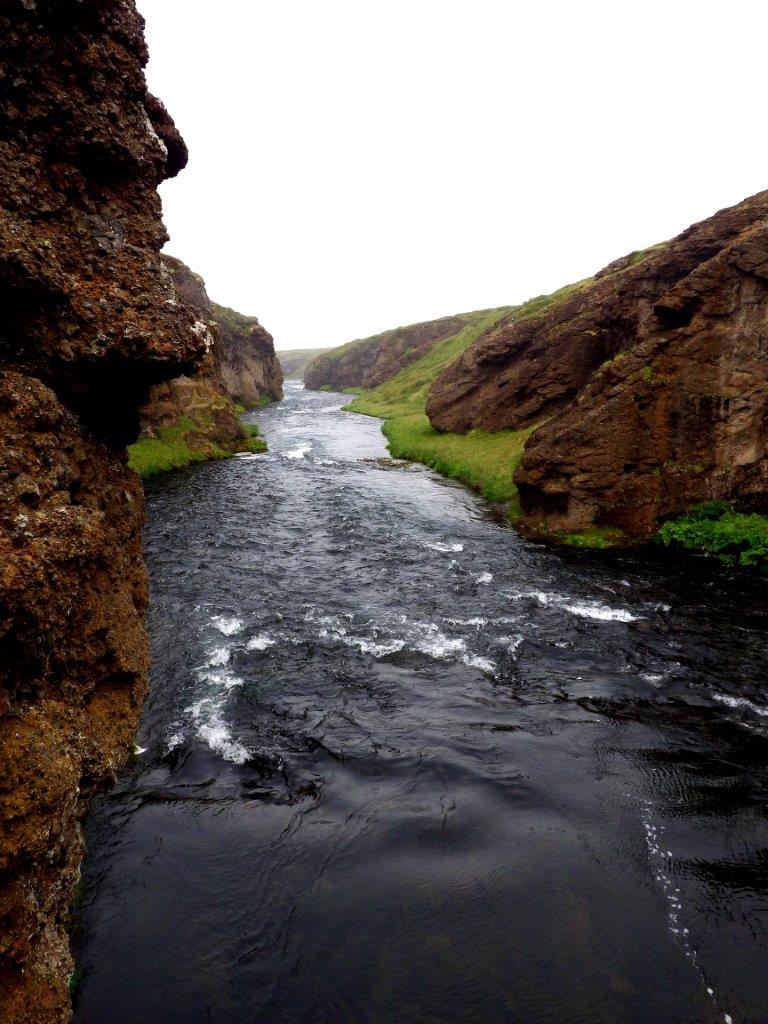 We then ventured up through the canyon stretch, a truly stunning part of the river as the flow bounces between lava walls. Later in the season this is known to hold reasonable numbers of salmon and requires some fairly unusual fly fishing techniques. We peered over a couple of the cliffs to see if we could spot any flashes of silver but then carried on up to target more dry fly hungry trout.

After the group of us landed several more good fish amongst the average 40-45 cm browns it was time to pack up and prepare for the mighty Laxa I Adaldal and a chance to search for some truly monstrous wild brown trout. 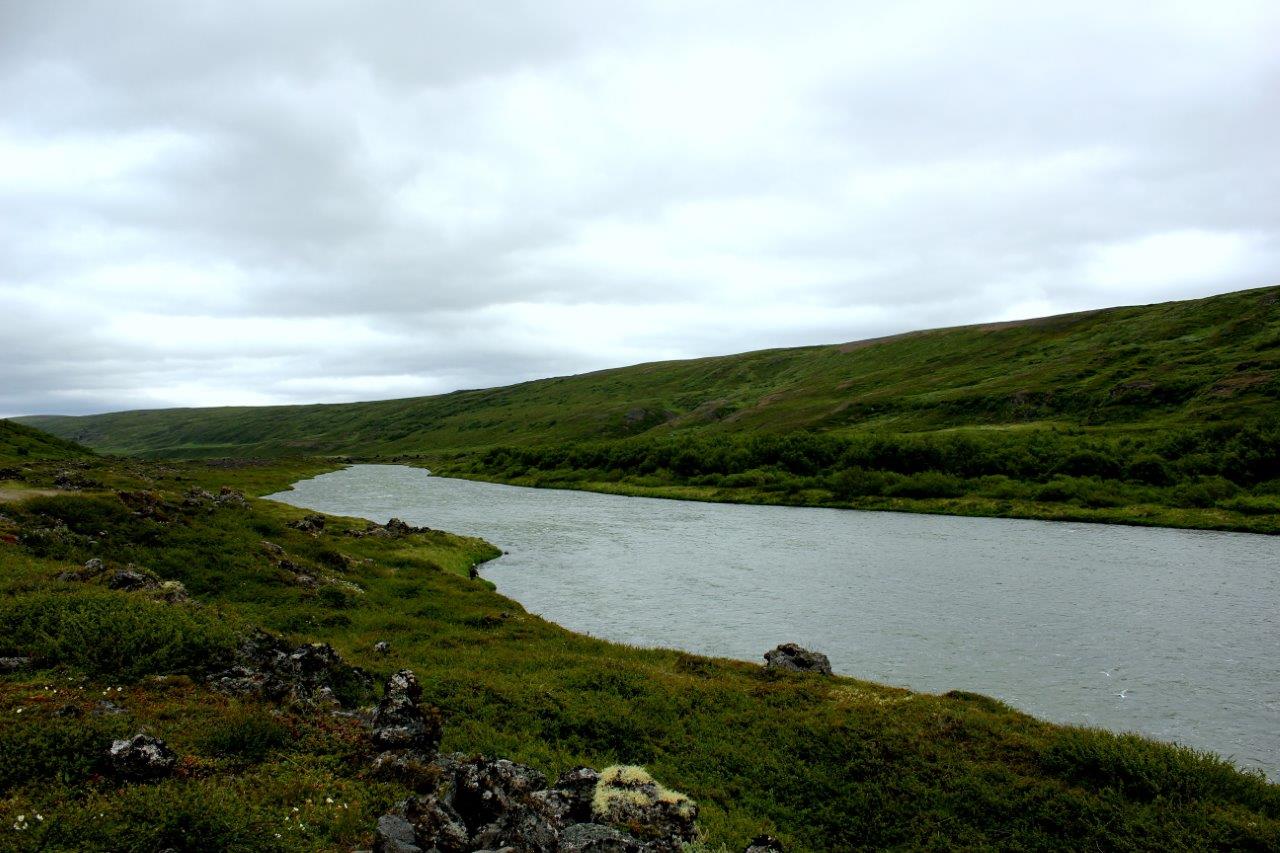 The drive up into Laxardal is always filled with anticipation and excitement. Even now, on my fifth trip to the valley, I can feel the hairs on the back of my neck stand up just at the knowledge of the brown trout that are hidden in the waters there. This season we were greeted by greenish water, this was highly unusual and far removed from the gin clear water that I had become accustomed with in mid-July. Regardless of the lack of clarity and inspired by several trout of 55 – 65 cm noted in the catch records for the week before, the group set up their rods and headed out with the guides. 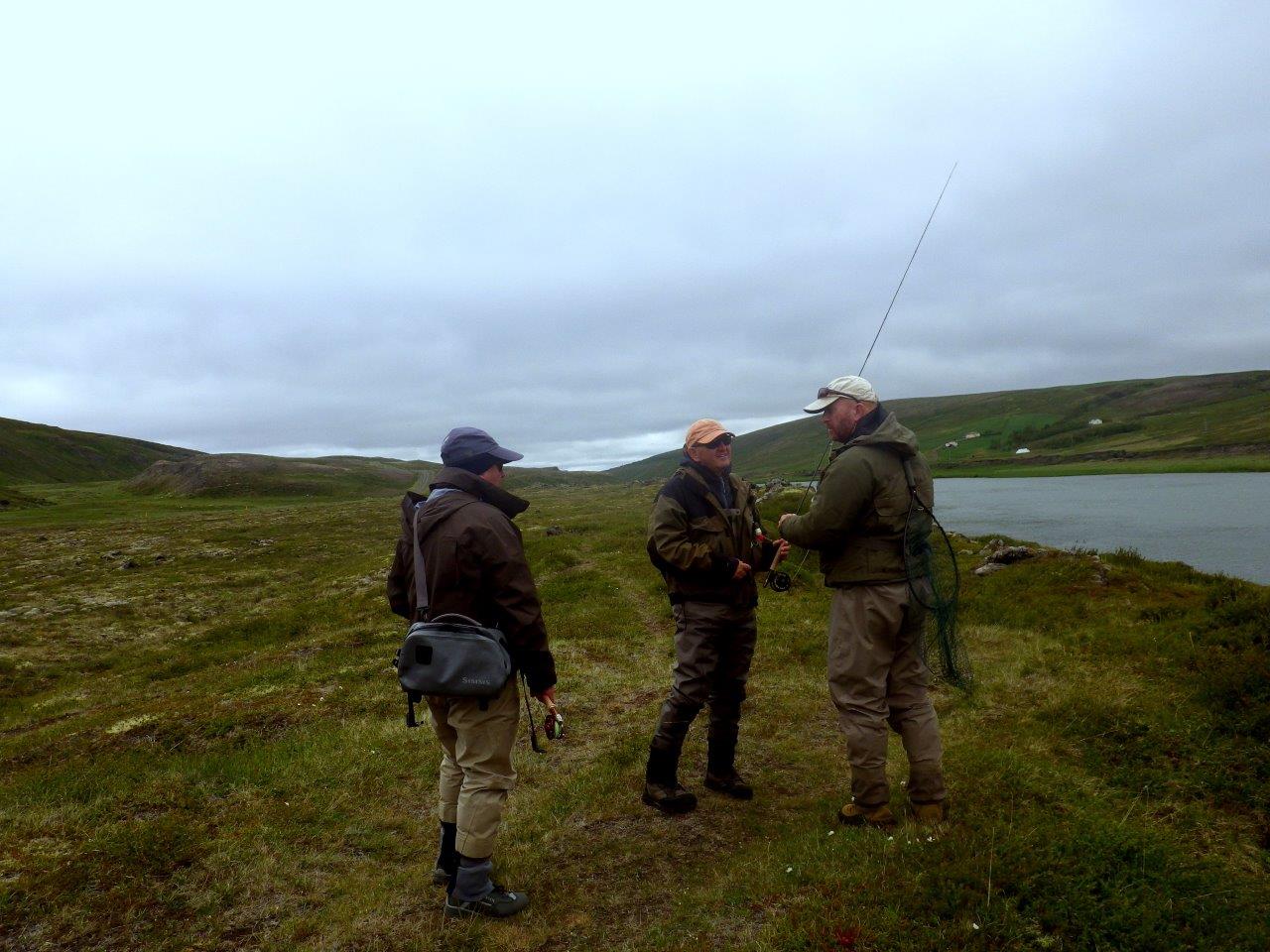 Whilst most fish caught to this point in the season had been taken on nymphs and streamers I decided to persevere with a dry fly, my favourite way to search for Icelandic browns. The trick in the cold and tough conditions is to focus on the knee deep (and shallower) water, with a good flow and a slightly broken surface. With this in mind I headed to a pool called Slæda, this pool features a large and steady riffle and is usually home to quite a few fish. Each cast was made to cover new water, working systematically up the pool. 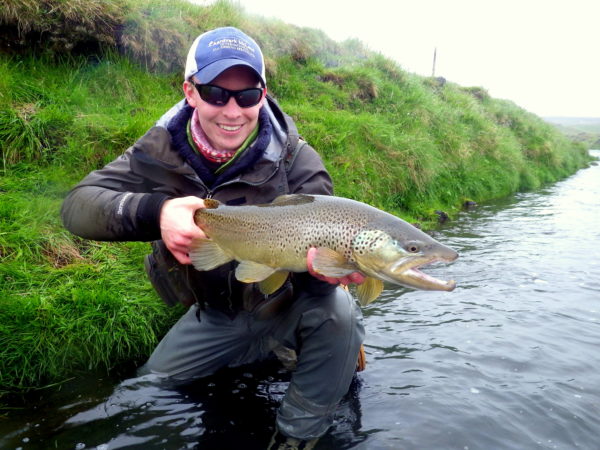 Before long there was an aggressive swirl at my Galdra-hopper and the fly disappeared out of view. My strike was met by a heavy and agitated brown trout, whose first intentions were to head out across the river. There was much rustling as I tightened the drag and put a serious bend in my 5 weight. The fish used its strength and weight as well as the current to take the upper hand, it is an odd sensation to feel helpless fighting a brown trout but this is Laxardal and this is normal! With every agonising turn in the current I tried to gain some line, watching the spade like tail propelling the fish away from me. Eventually I was able to get the fish close to me and lift its head; it only just slid in to the net, and I rushed it to the bank. We measured the brute at 60 cm yet well over 6 lbs, this fish was seriously fat and a sensational fish to start with. I looked forward to heading back to the lodge to hear similar stories from the others. 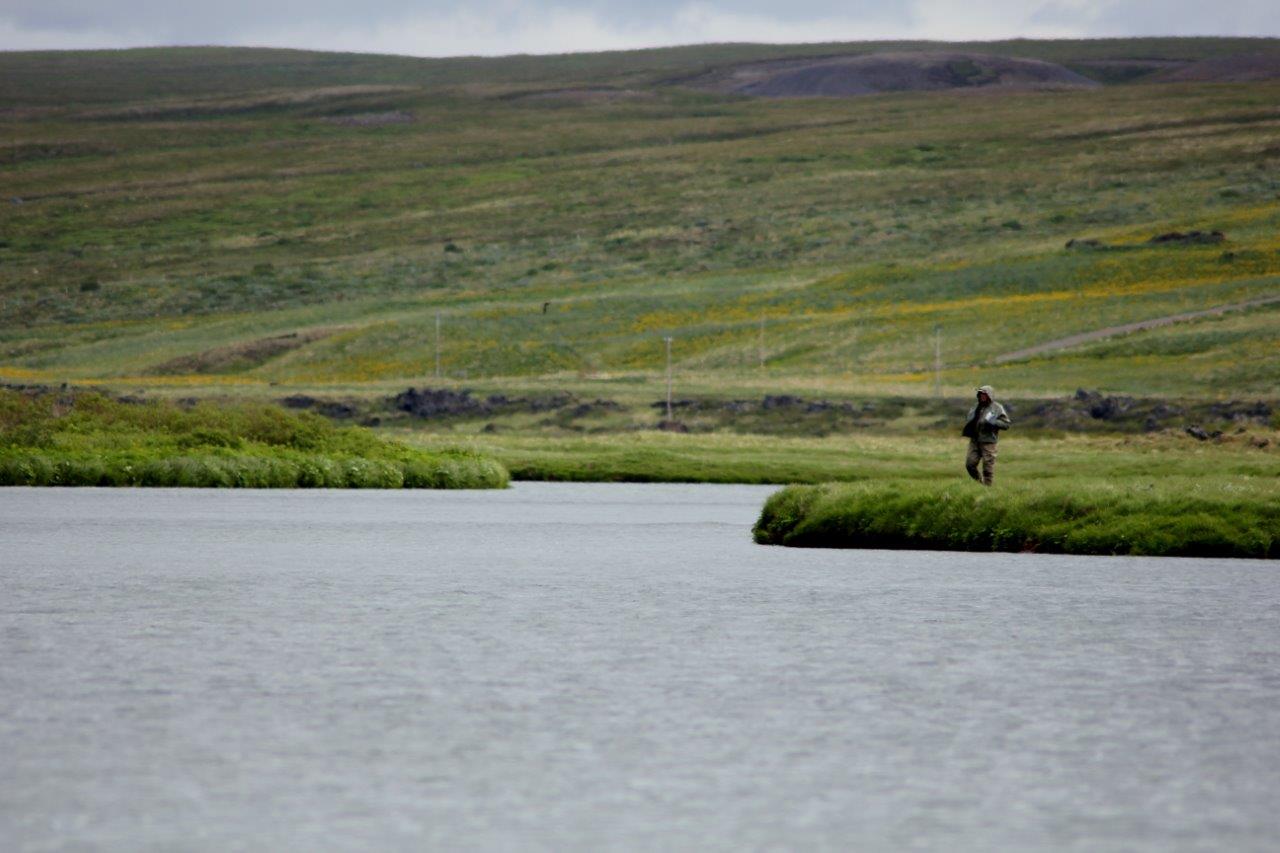 The feeling in Raudholar Lodge that evening was one of high spirits, whilst the fishing had been tough most of the guys had been able to experience so truly special fish and there was a hunger for more. We drank a few of the local IPAs and the odd dram of whiskey and headed off for the brief sleep before we took on Laxardal for our first full day. 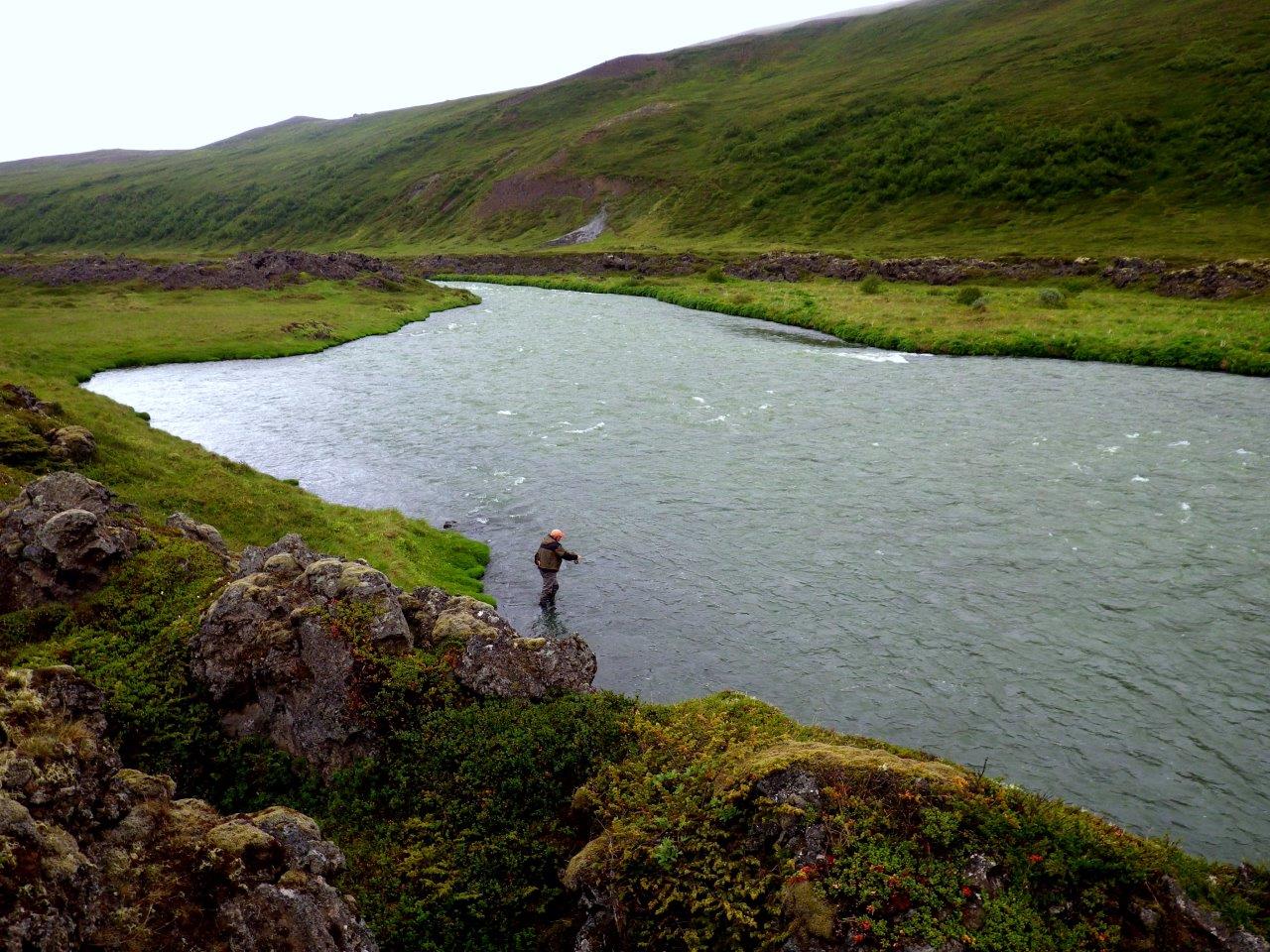 The next few days fishing required plenty of fly and method changes as well as searching water to find the brown trout. Most of the consistent fishing was had on nymphs and streamers but from time to time the large amounts of midge hatching brought the trout to the surface. When people did catch fish, however, they were shocked and delighted by the power and size. Most of the guys were lucky enough to catch a new personable best trout during the week. 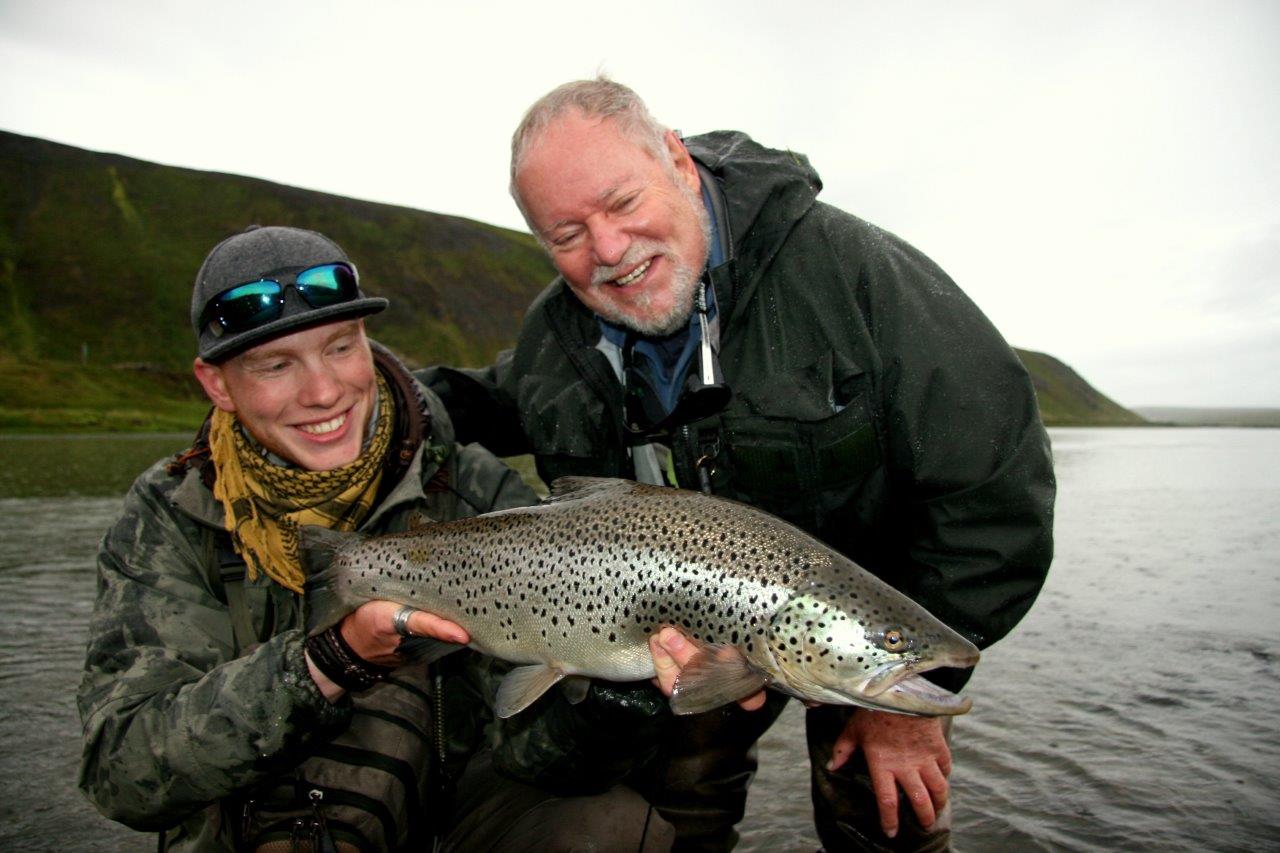 In one hour Geoffrey Paradise was able to beat his own personable best wild brown trout. It all started with a feisty 3 lb fish that fought well above its weight. This was shortly followed by a beautiful 5 1/2 lb cock fish, a memorable fish to land but fish of this size are forming the average on Laxardal this season. Not satisfied by two lovely fish, Geoffrey cast once more to suddenly find himself in a brutal tug-of-war. The fish bore deep and tried to exit the pool downstream but with expert control Geoffrey was able to turn it. Under the expert guidance of Gummi, his guide, they were able to land the fish. The brown trout was to remain the fish of the week, at an impressive 69 cm and 8 lbs 9 oz it is easy to see why. 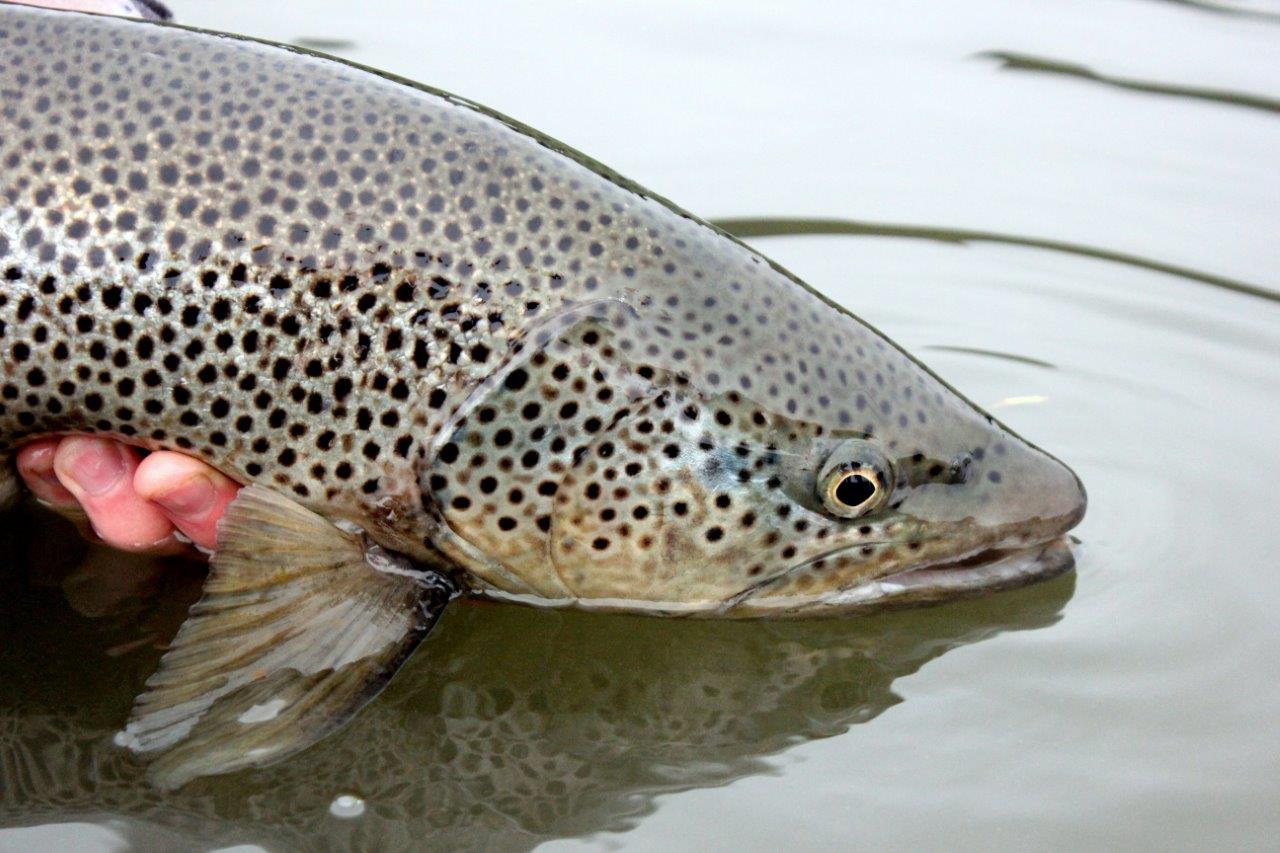 Marcus, a Laxardal veteran, and Steve fished hard for the first three day slot. The pair were delighted when Steve hooked into several big brown trout, an experience far removed from the normal becks and rivers that he targets on the Yorkshire Dales. Whilst not all were landed the tales in the lodge each lunch and evening were tremendous. 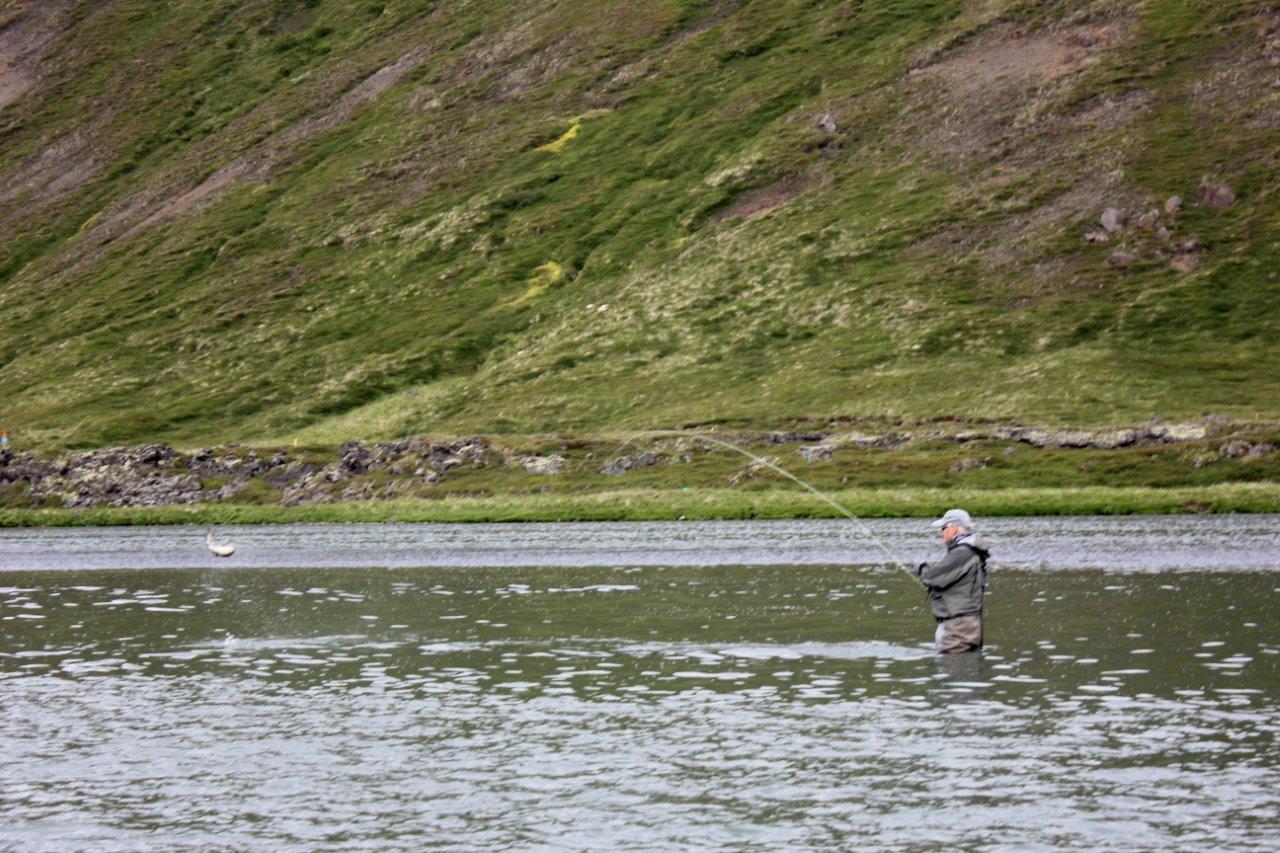 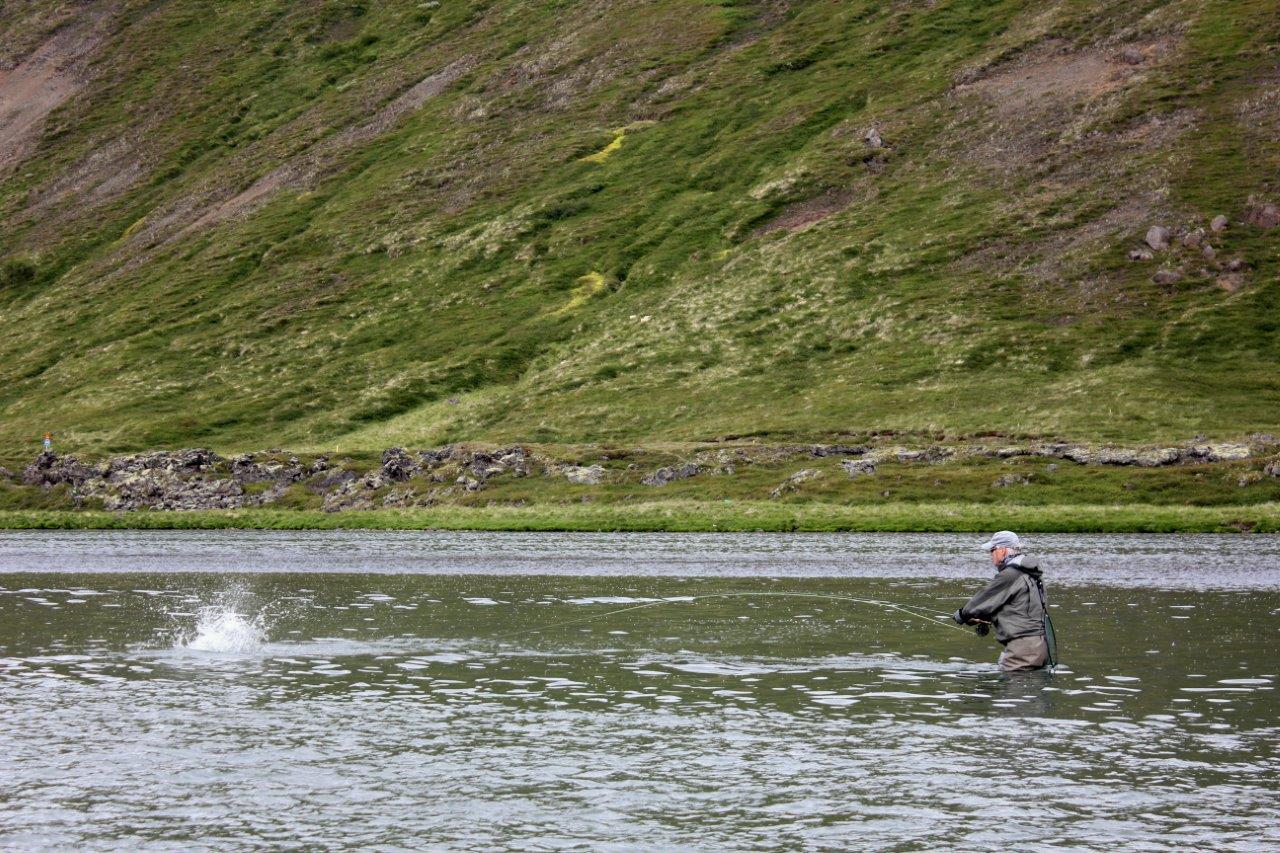 David and Jonathan, like myself, persevered to find rising trout and their efforts were rewarded on several occasions. The fish made them work hard, with each riser requiring multiple fly changes but with great determination both anglers were able to fool some large and wise wild brown trout. 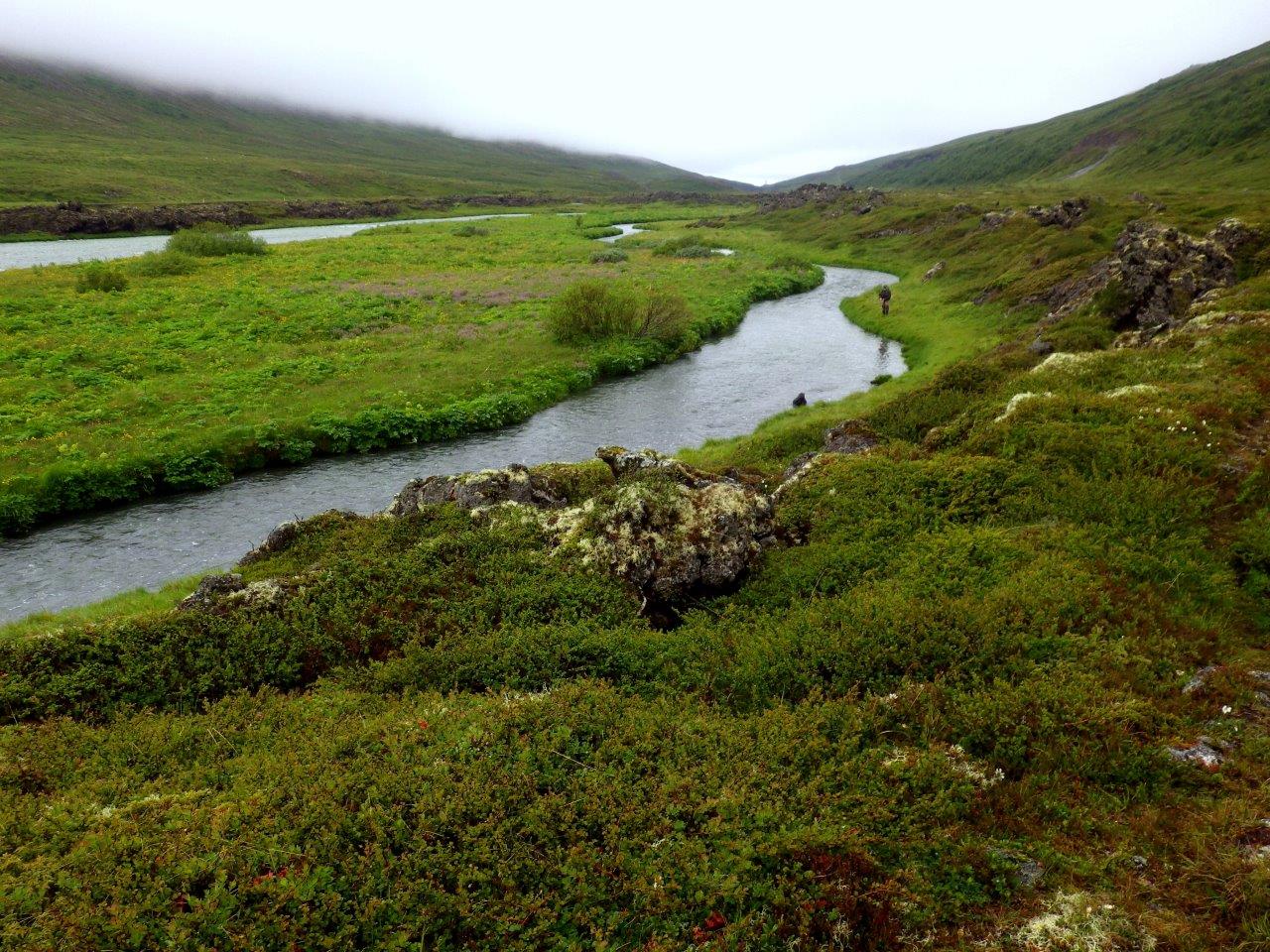 On their second visit to the valley, David and Brian were keen to see more of it than ever. Their fishing was interspersed with cultural tours within the valley and discussions on famous Icelandic musicians. The pair were both able to put into practice some of the things that they had learnt the previous year to great effect. Brian on his last morning headed out with the chef, Peter, to catch some trout from a nearby water, living the true hunter-provider lifestyle – it tasted wonderful too. David also turned his hand to some lake char fishing, and having caught numerous fish on dries and wets he is keen to go back and explore the lake from a float tube. 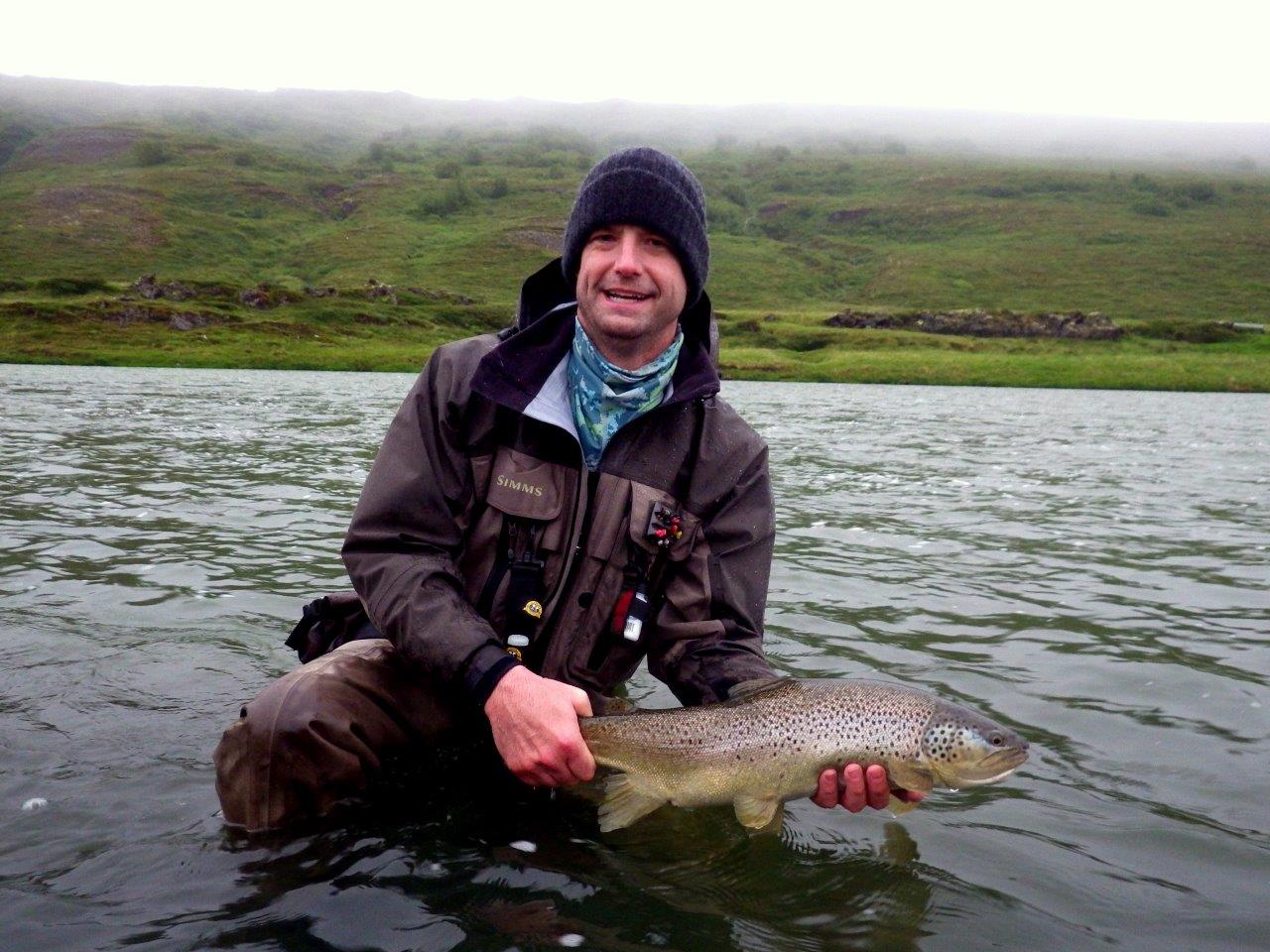 Both Hoesli and Jeremy found their fish catching feet through the week, they caught large brown trout with great regularity. They were not afraid to try different methods and caught using most styles. Hoesli perfected the art swinging a heavy nymph with a tiny trailing midge pupa behind it, in the right water as the flies began to lift you could watch the line go tight – incredibly exciting. 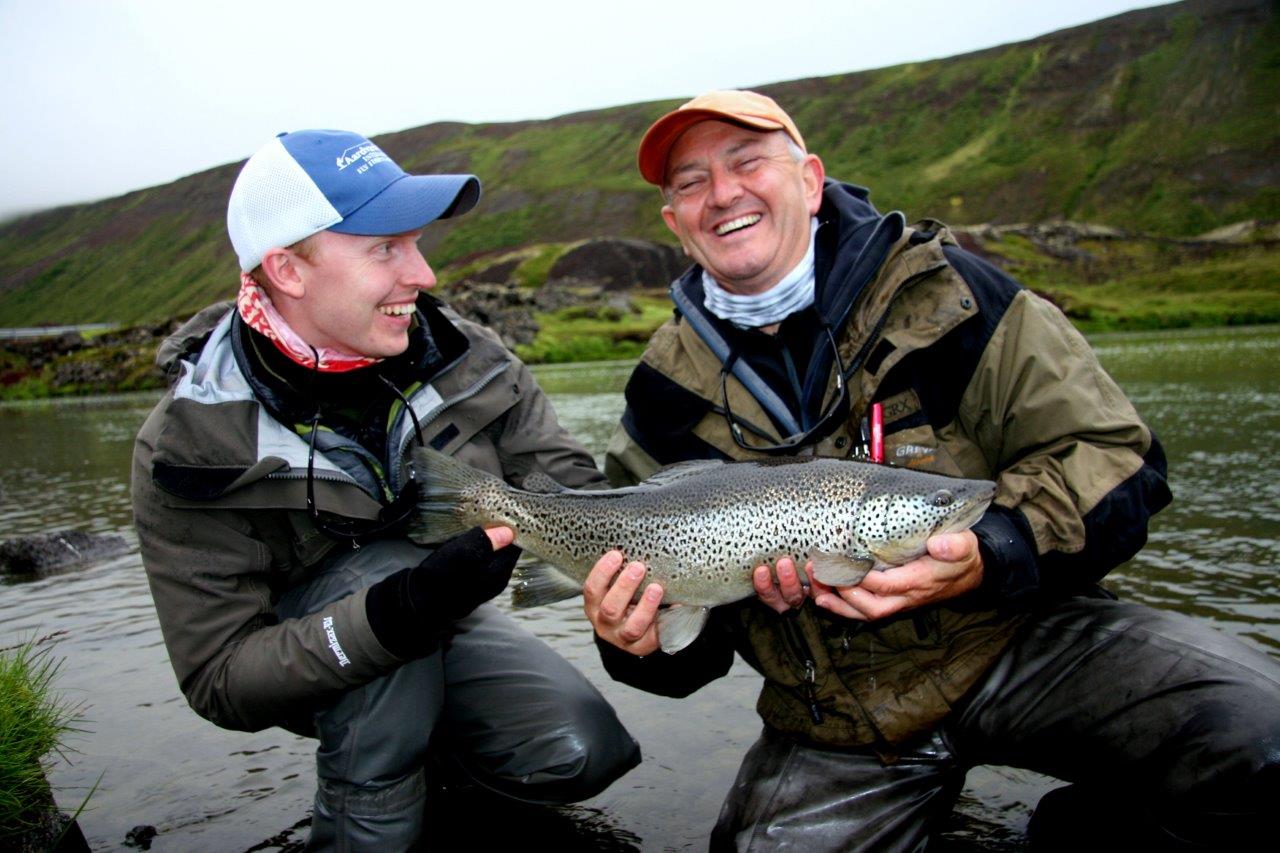 Away from the water the lodge was superb, over the last few years we have watched the small changes and now Bjarni and his team have created a special home away from home for trout anglers. The chef Peter, kept us well fed with wonderful meals and lots of freshly baked bread. The guide team as always deserve a massive thank you for their hard work and constant desire to make sure we were all in the right places at the right times. 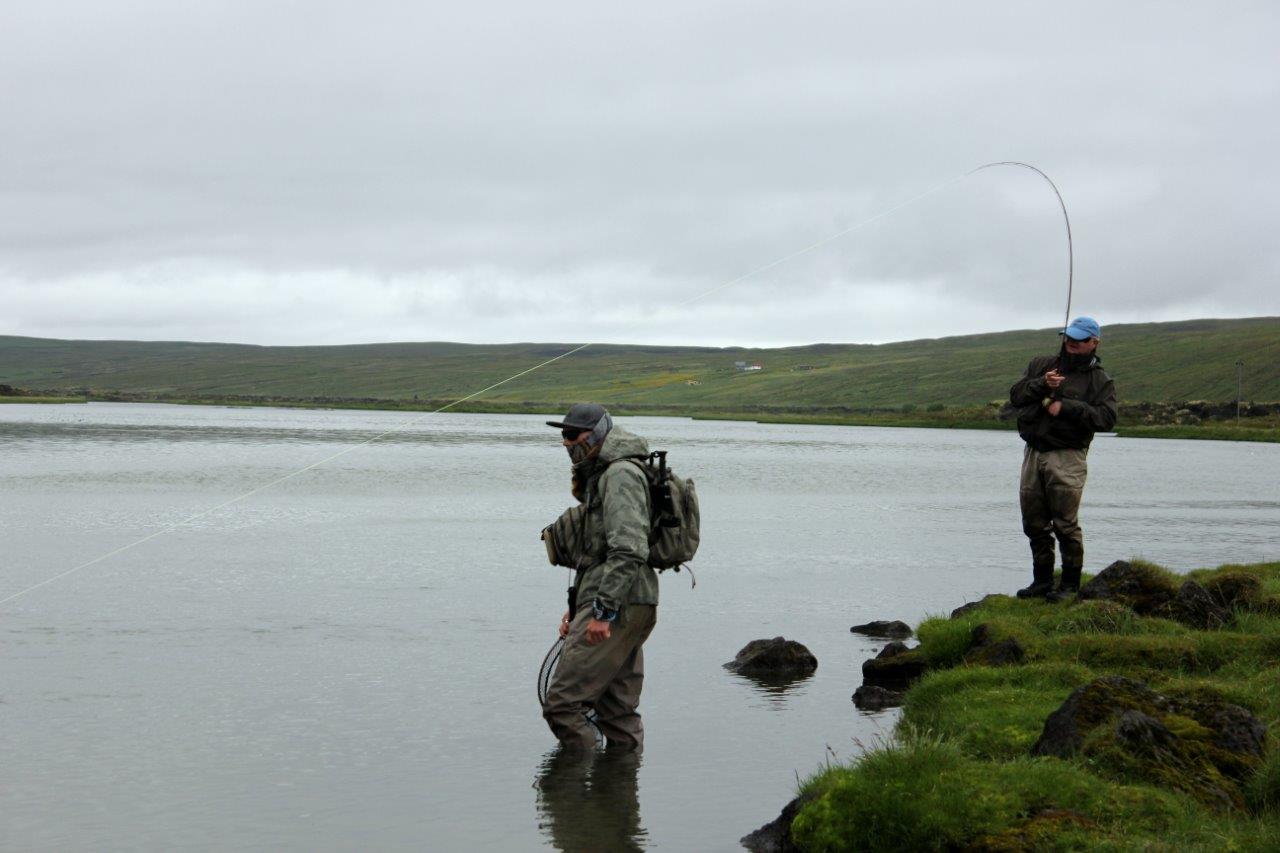 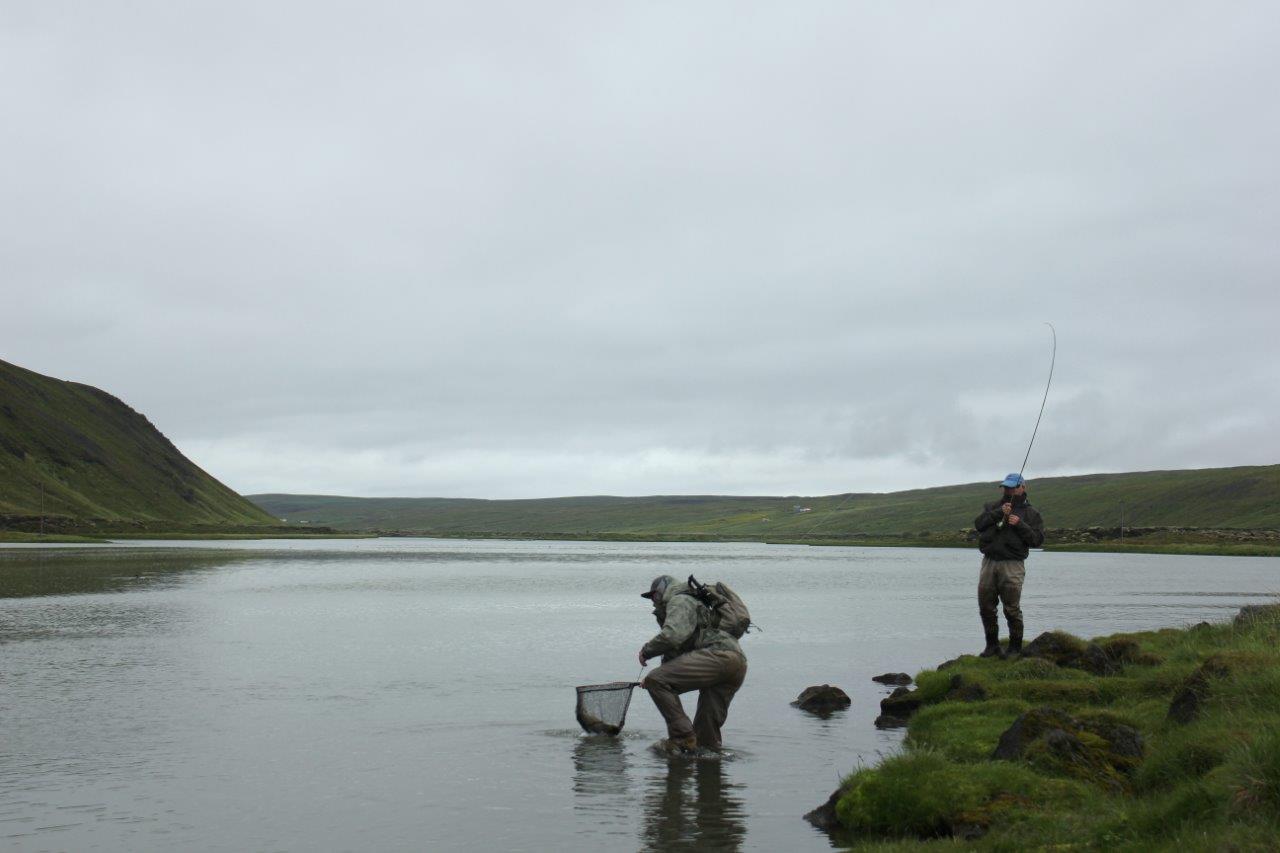 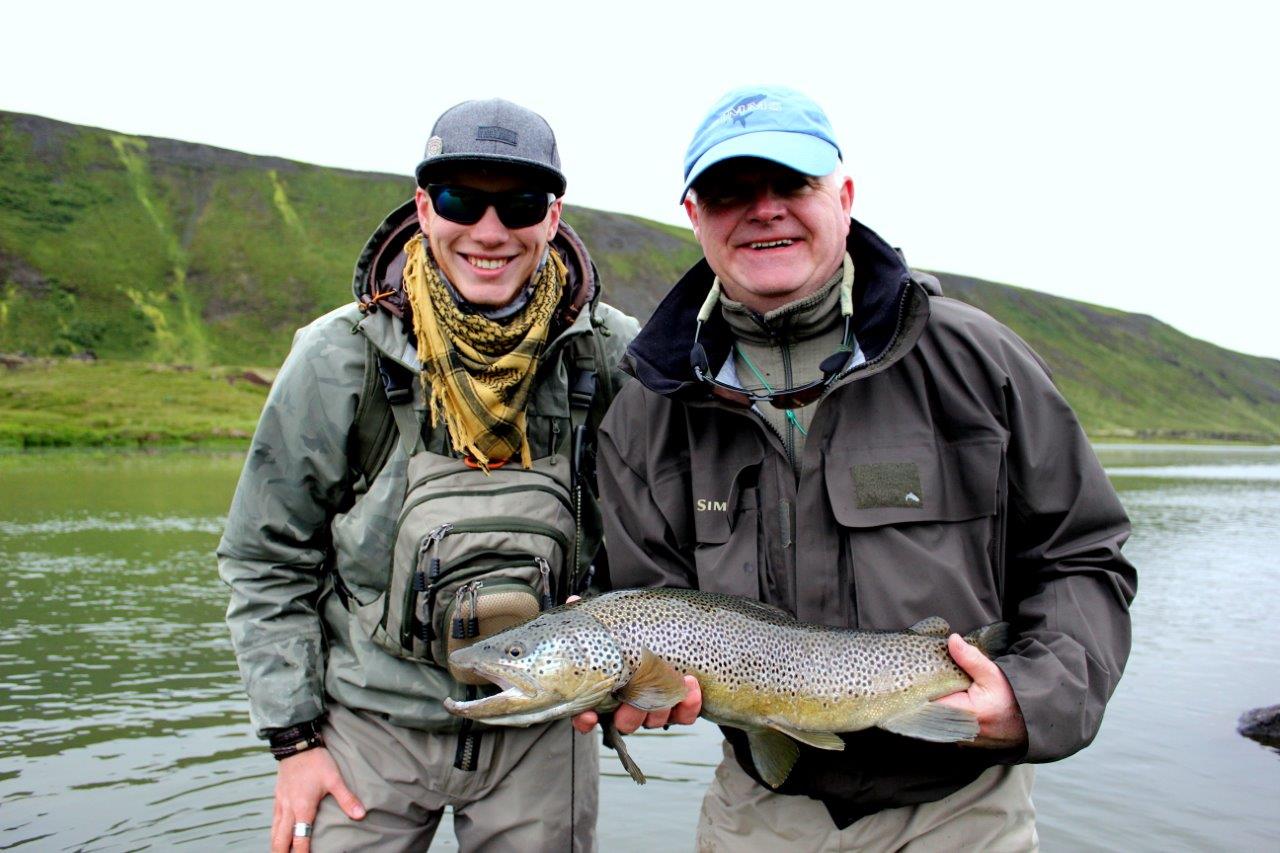 All in all while the conditions were tough every member of the group got to tussle with some giant trout, the average size was an impressive 5 ½ lbs with good numbers of fish over 6 lbs and even a few over 7 lbs. It is hard to find a fishery anywhere in the world that can produce wild brown trout of this size with such consistency as Laxardal. Whilst we did not see the river in full dry fly swing we were still able to watch giant trout heads snaffle dries from time to time. I cannot wait to head back! 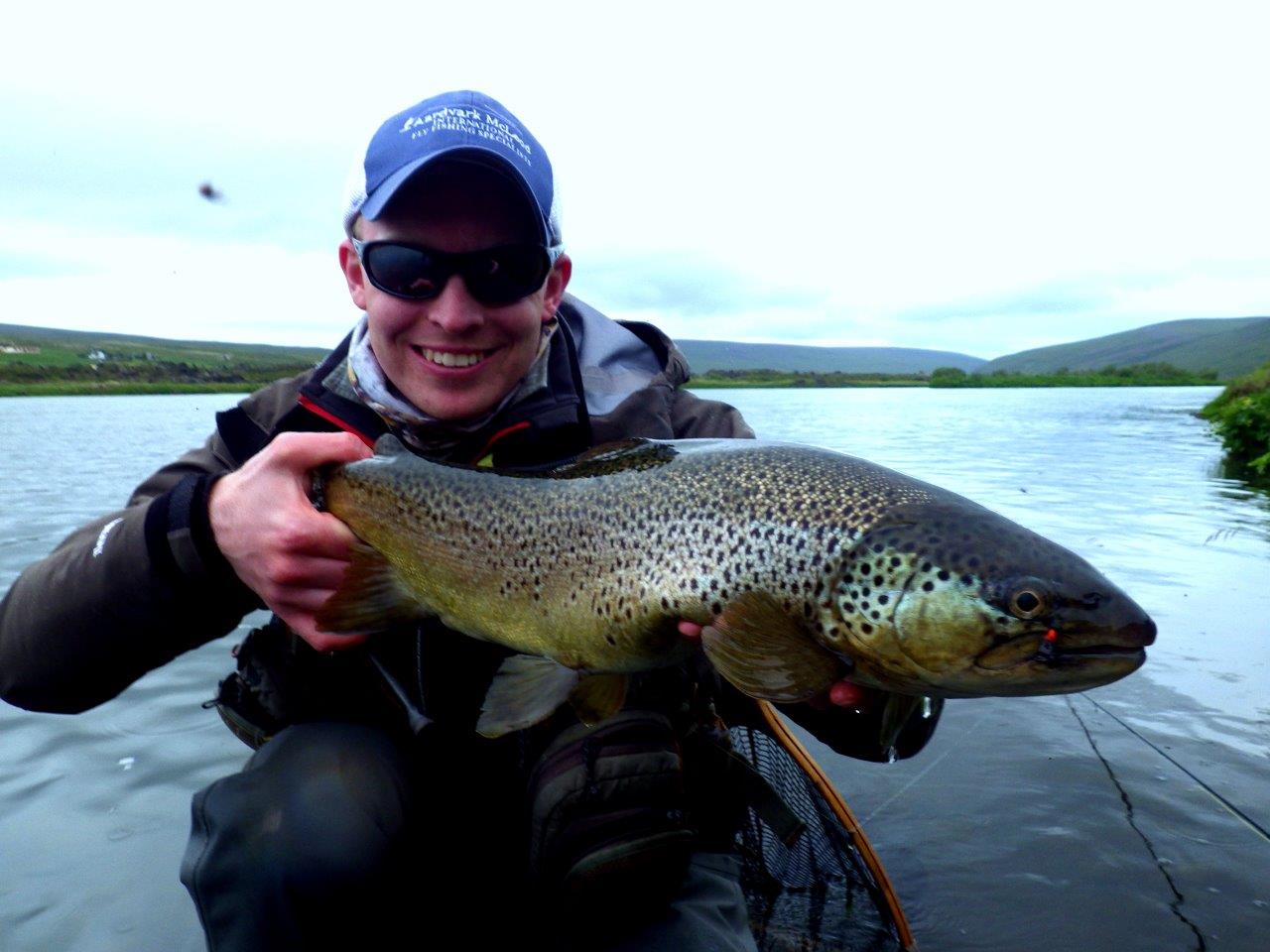 For more information on Laxardal and fishing in Iceland please contact Alex Jardine or call our office on +44(0)1980 847389.