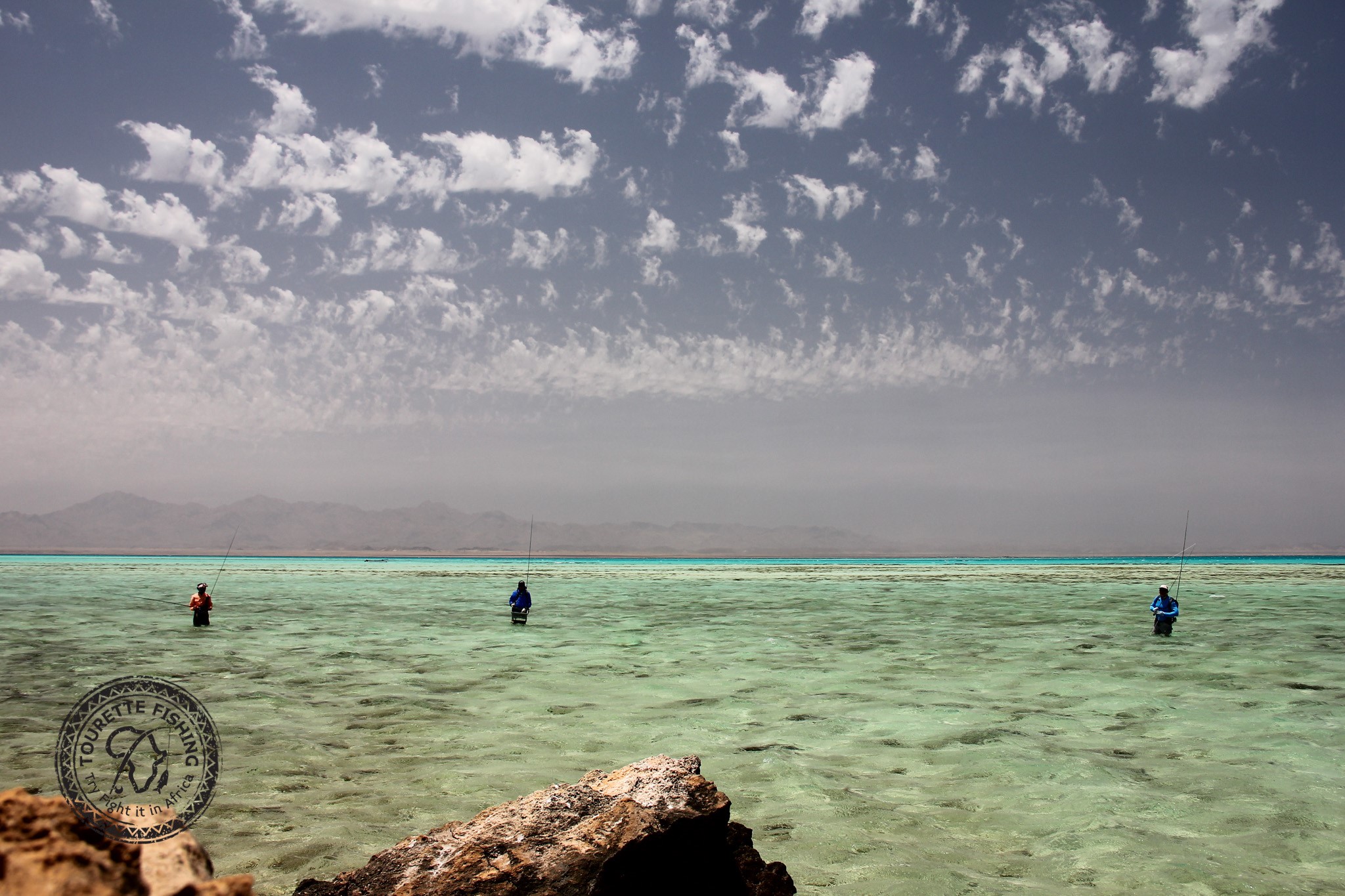 Week four, also the final week of the first stint of the 2015 season, came within a blink of an eye. We were joined this week by a group of friends, Piet, Christo, Riaan, and Johnathan from South Africa. They were also joined by Thomas from Holland and Leo from Italy.

Unfortunately the weather seemed that it’s still had some cards to play and the forecast for the week seemed gloom! Two “sort-of” decent day’s followed by what looked like to be winds from the movie Twister for the rest. Nonetheless, we had two days of predicted fair weather and were keen to make the most of them. A positive attitude will always bring positive results.

So at the dawn of the first morning, we had a quick breakfast before heading out for the full day on The Island. The wind started to settle down again but was still fairly strong. One boat headed to the eastern side while the other boat tackled the west.

The day started off with really cold, high waters and the fish were scarce. However, as the day grew older, the water temp started to rise and so did the numbers of fish. Soon we were casting to a good number of triggerfish although they were beyond tricky. Spooking for almost anything you cast at them while some just plain ignored your fly. The lads persisted though and managed to lift some nice fish for the camera’s. Piet and Leo took the spoils with two triggers each and Thomas came very close with two bluefin and a solid GT on the tease, but got dealt a bad hand and lost all three of them.

On day 2 we woke to beautiful weather and one could feel the excitement around the breakfast table among the guests and most certainly the guides. One boat headed back to the big island while the other headed straight to the PlayStation. 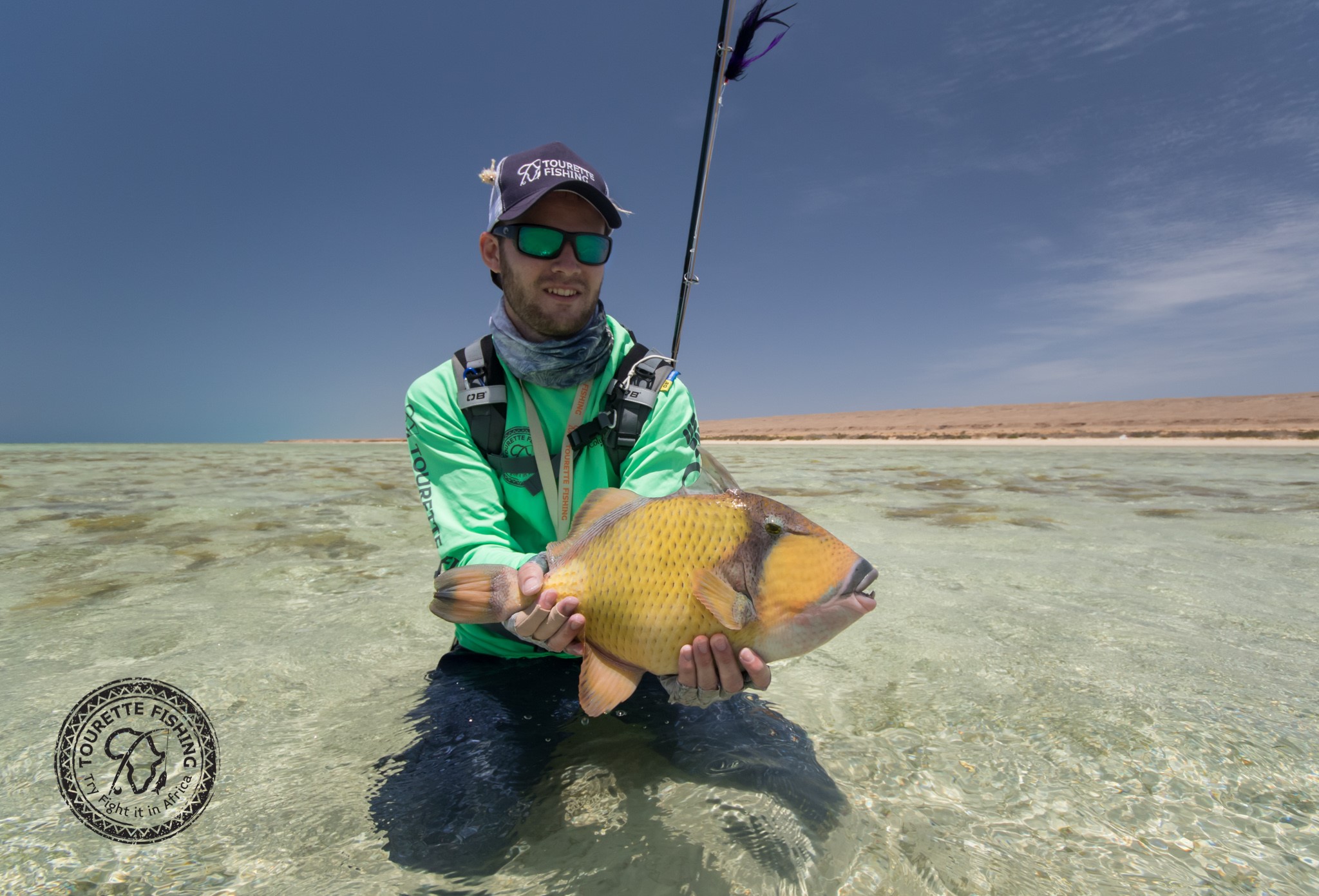 It did not take long for the fish to make an appearance and soon the flats were crawling with triggerfish! So much so that at one point guide and guest were spoilt for choice with tails all around them. To make things even more complicated, in-between all the trigger tails a couple shoals of bonefish decided to crash the party along with some bluefin trevally, barracuda and two really big permit. Thomas managed to hook one of the big bonefish but his run of bad luck from the previous day continued and not long into the fight his hook pulled again. He quickly followed up though and finally put his bad luck to rest(or so we thought) by landing a very nice titan triggerfish right before lunch. By the end of the day however the fish still came out tops and we got showed again that triggerfish deserve a lot of respect. Just because they are tailing hard doesn’t mean they are easy fish. Pinpoint accuracy and delicate presentation is required and even when you gets these right, they will still decided if you are worthy.

Day 3, as predicted, the weather went really fowl on us. We woke to heavy winds and rough seas. We decided to give it a go anyway. One boat opted to rather go an do some popping offshore while Thomas and Riaan braved the one small flat close to the mothership. We found some triggers on the flats but one, the wind made casting incredibly tough, and secondly the change in weather really put the triggers off the feed. One could just see in the body language that we were out of luck in a big way! We opted to do some teasing in the late afternoon but after 2hours of teasing and not a single fish showing interest, we decided to call it a day and head for a steamy cup of Italian coffee on the mothership. Meanwhile the popping boat had some success. Piet got some smaller GT’s, a nice barracuda and bohar snapper while Johnathan got a new PB 85cm GT. 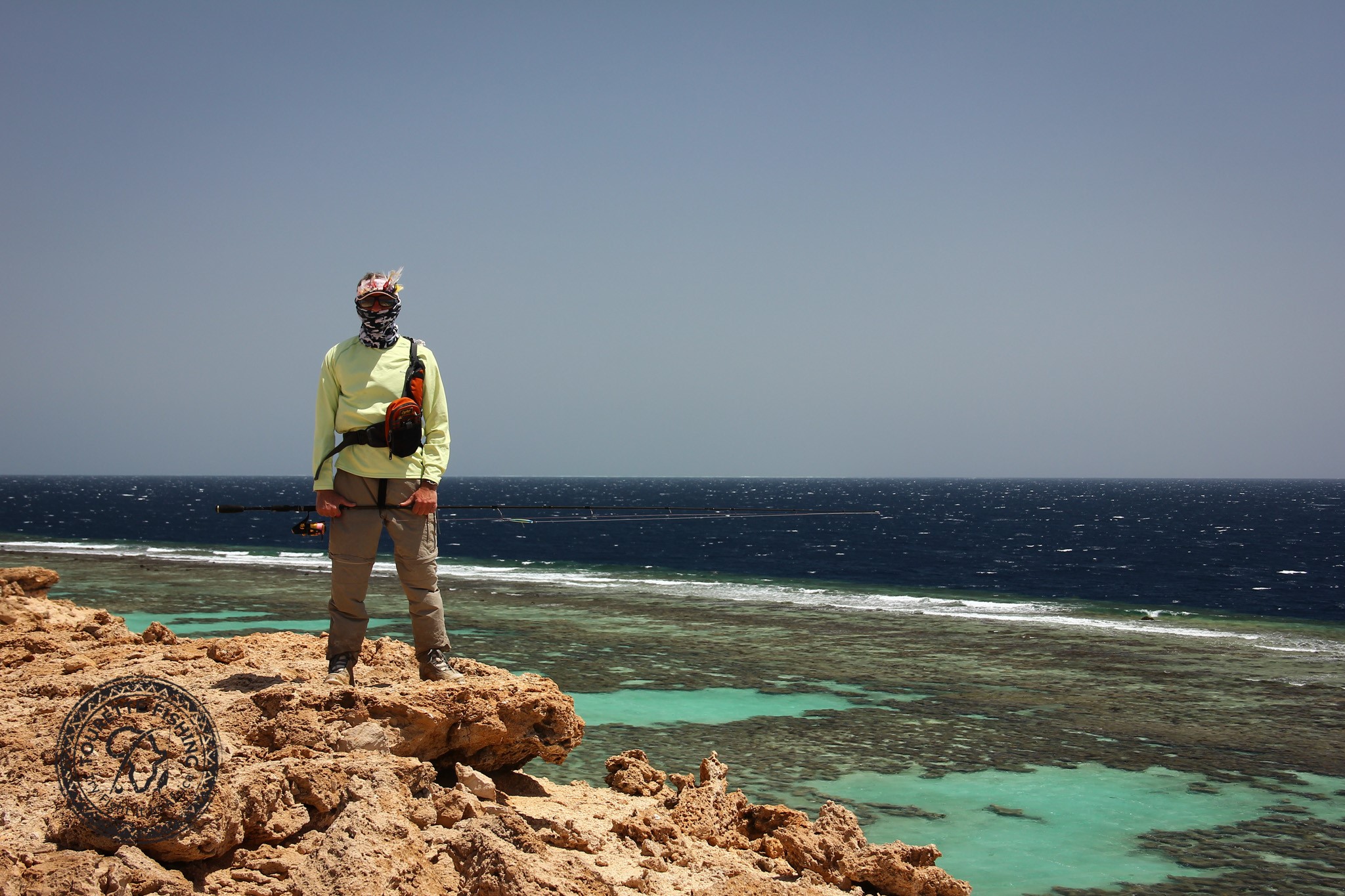 Day 4 the weather got even worse with winds almost in access of 40knots. It was pretty clear that fishing was not a real option but we did manage to sneak in at least 2 hours of teasing in the morning which got us one small bluefin but that was it. The rest of the day we took shelter on the mothership as the wind got even stronger, ripping the canopy on the mothership to shreds!

Over the next two days the weather gods decided to smile on us a little and the wind started to die down. 15knot winds is not considered as ideal fly fishing conditions but after days of 30+knot winds it felt like a slight breeze and more than manageable. So for Day 5 we split again with two guys heading for the flat while the rest went popping offshore. The flats were icy cold from all the wind and water levels very high but at least we could get out and fish. We managed to find some triggers but they were extremely skittish and near impossible just to get a fly close to. The teasing session in the afternoon however produced the goods. After a couple teases, we had a solid bohar snapper come in and wreck  complete havoc. After eating Riaan’s black semper at his rod tip, it took off in spectacular fashion, breaking his rod in the process. 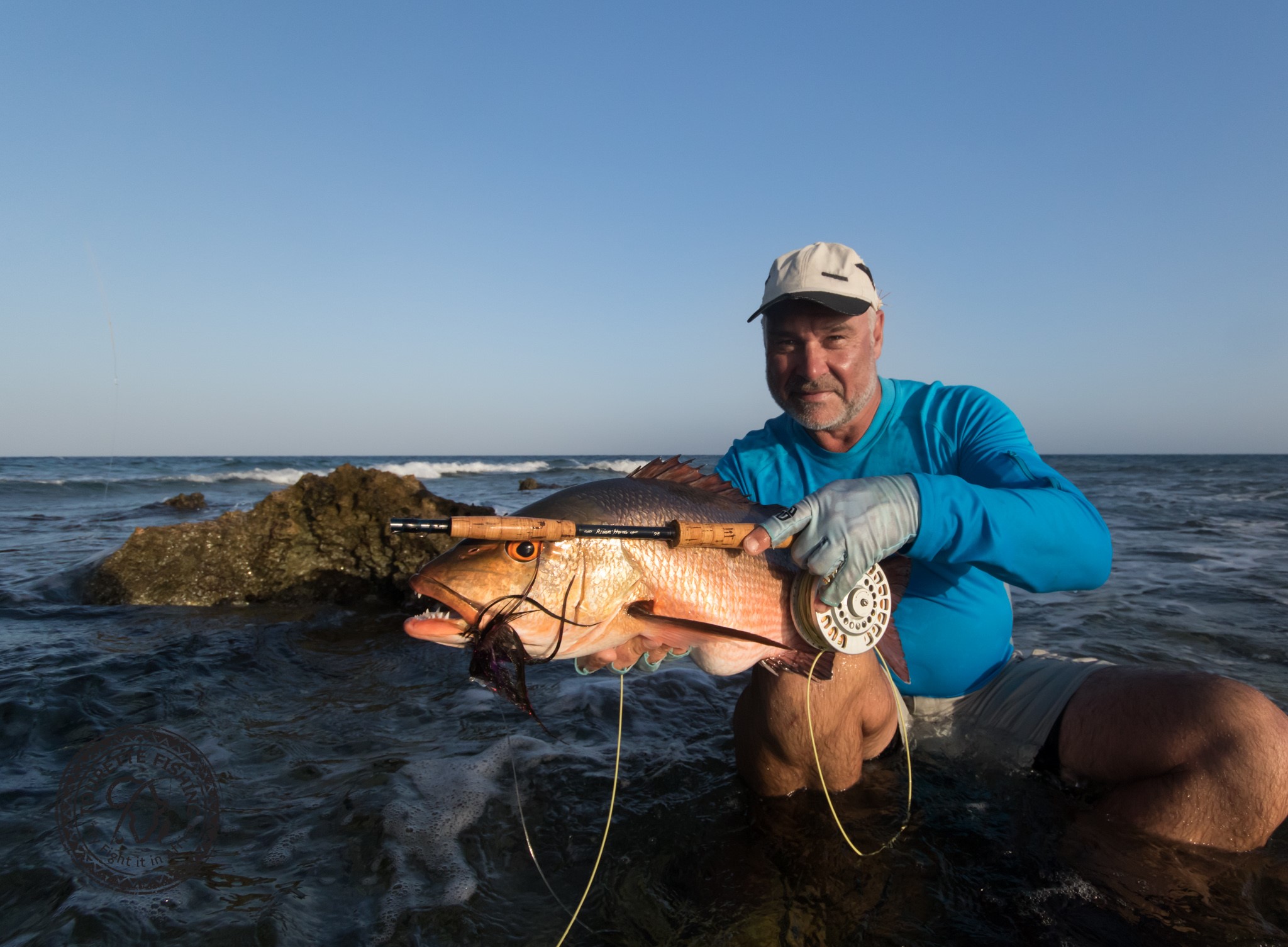 Riaan ended up fighting the fish by hand but managed to land a beaut 7-8kg fish. We were running low on daylight and decided to squeeze in five more teases. On the second tease, a monster GT exploded behind the teaser like a grenade and came in very, very angry! It followed in all the way and when the tease came out, ate Thomas’s fly in one massive explosion, again at his rod tip, before making his way back off the flat and popping his loop on the coral. A very unfortunate end to the day for Thomas. Meanwhile the popping boat had some success landing 4 GT’s with Piet taking first prize by landing a whopping 20kg fish. 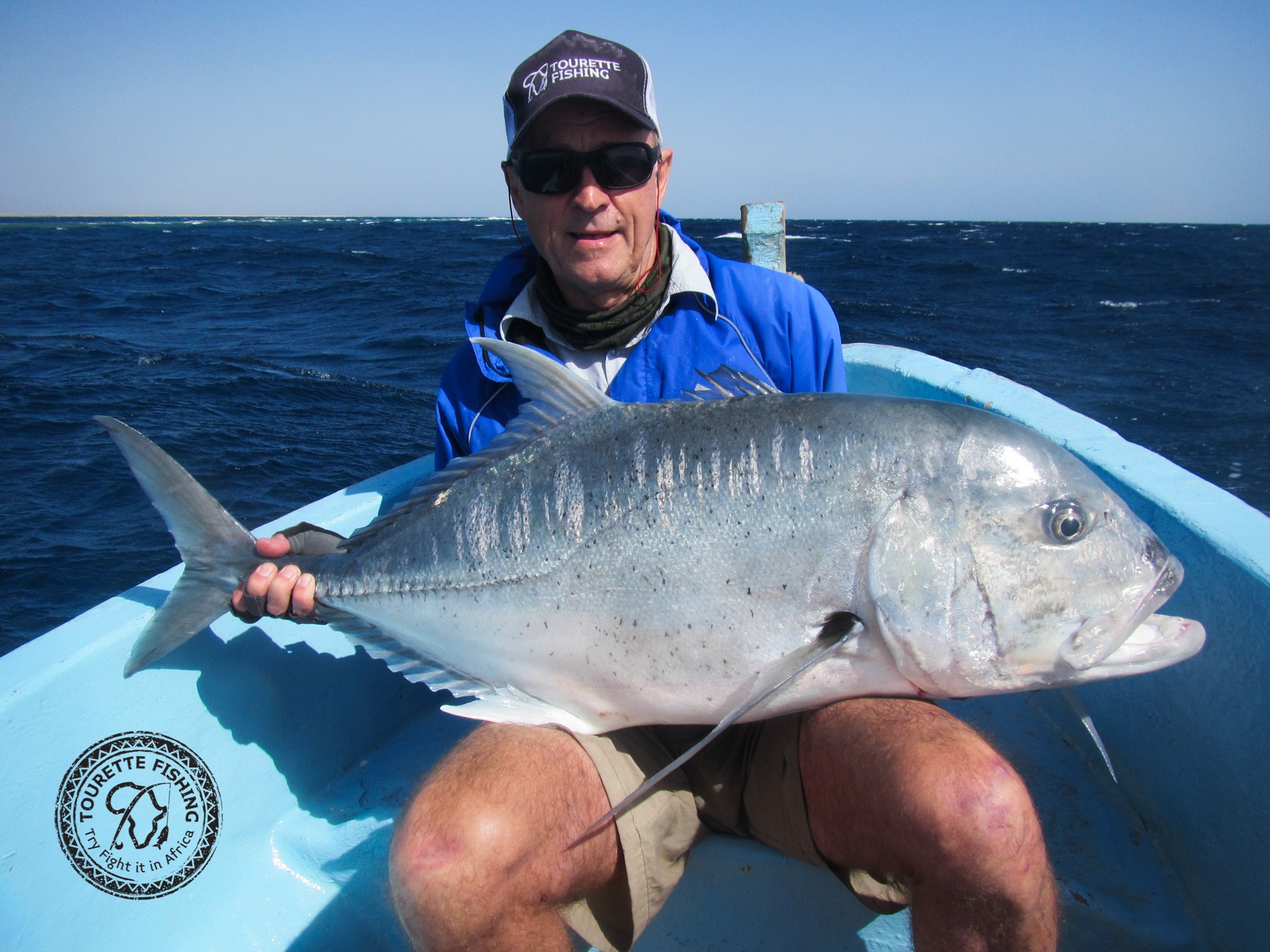 The final day the wind dropped some more and so did the water level, at an alarming rate. The water was still icy and fish were few and far between. We found some triggers in patches of warm water but they were still fussy and not planning on handing out gifts either. Thomas’s bad luck continued though. He managed to hook the only trigger for the day but the fish took him right off the flat and straight into the coral. The guide at hand was so desperate that he went in pursuit, diving between the coral, trying to get the fish out but was left with only a tan merkin stuck in the coral, and no trigger.

A very unfortunate end to a really tough week. The weather made the going beyond tough and hopefully this was the last of it for now. The “calm” days really showed the potential of the Nubian Flats and if this unseasonal weather decides to leave us alone, we will be in for a cracking second half of the 2015 season.

Thats it for now.