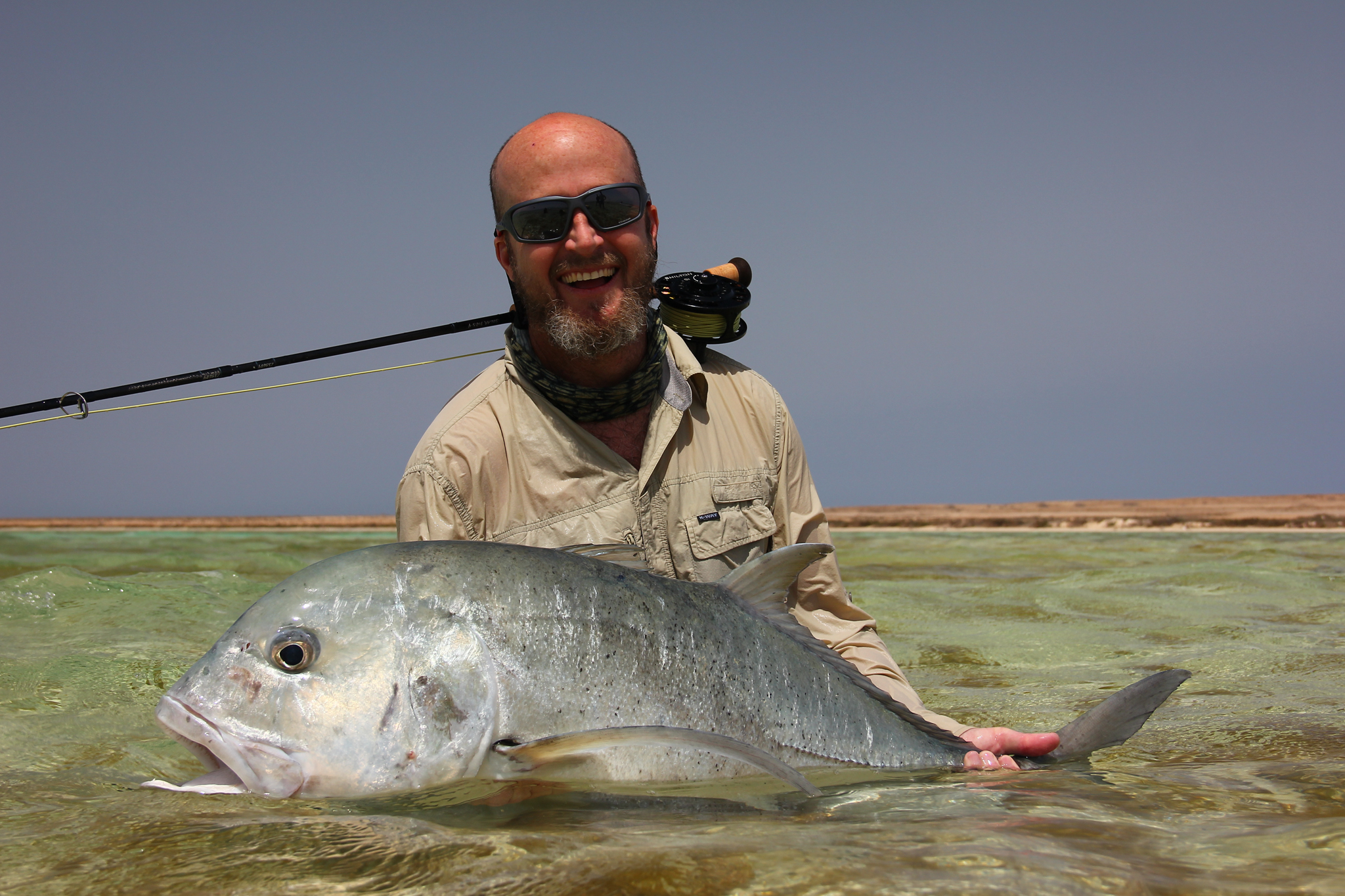 It felt like the season has only begun and we were already into week 3 of the Nubian Flats 2015 season. We were joined this week by Jeff Currier (for the second year), Mike La Sota, Mike Murray, Andrew Early, and famous Capetonian artist, Conrad Botes.

The first morning we woke to a beautiful sunrise and almost mirror like ocean. So after setting up all the rods and a quick breakfast we headed out for the day, eager to go find the tailing fish the Nubian Flats are so famous for.

The calm weather did not last long unfortunately and soon the wind was howling again, making the going quite tough. The visibility on the flats decreased and so did the water temperature as well. The triggerfish were really hard to see but some of the ones we found tailing were super aggressive. Mike La Sota in particular had two fish follow his fly so far that by the time they ate, he literally just pulled the fish onto dry land on the hook-set.

The story of the day however had to go to Andrew Early who hooked into a brute of GT while walking back to the skiff for lunch. This fish shot straight off the flat and after some serious diving by guide Federico, managed to land a beautiful 100 cm fish, bringing the first day out, to a very successful end. 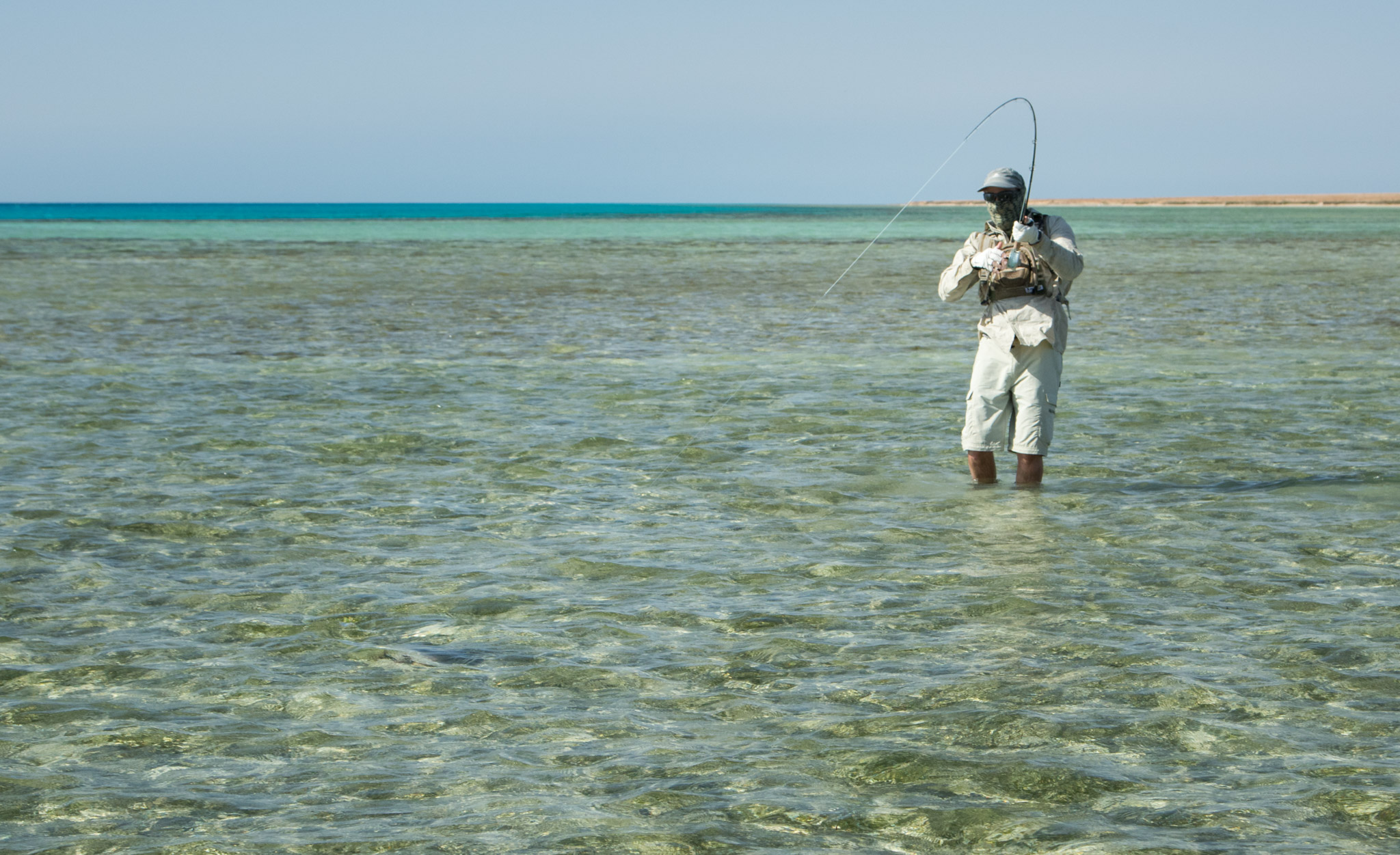 On the second day the weather seemed to settled down again and we tried to make the most of the good conditions and headed out for the whole day again. The one boat headed out to the big island while the second boat, with Jeff and Mike, headed for the two small islands also known as the Playstation by the guides.

The conditions were really favourable and this was reflected by the numbers of fish that were crawling on the flats. Not even 5 minutes into the walk thee guys found triggerfish on the big island but quickly realised that unlike the day before, they were beyond tricky and spooked almost instantly. These weren’t the only fish that acquired some “Jedi Level” presentation however. We had two good shoals of permit come in that spooked, as well as bonefish, in shoals and big single cruising fish, refusing everything we tried to feed them on the fringes. 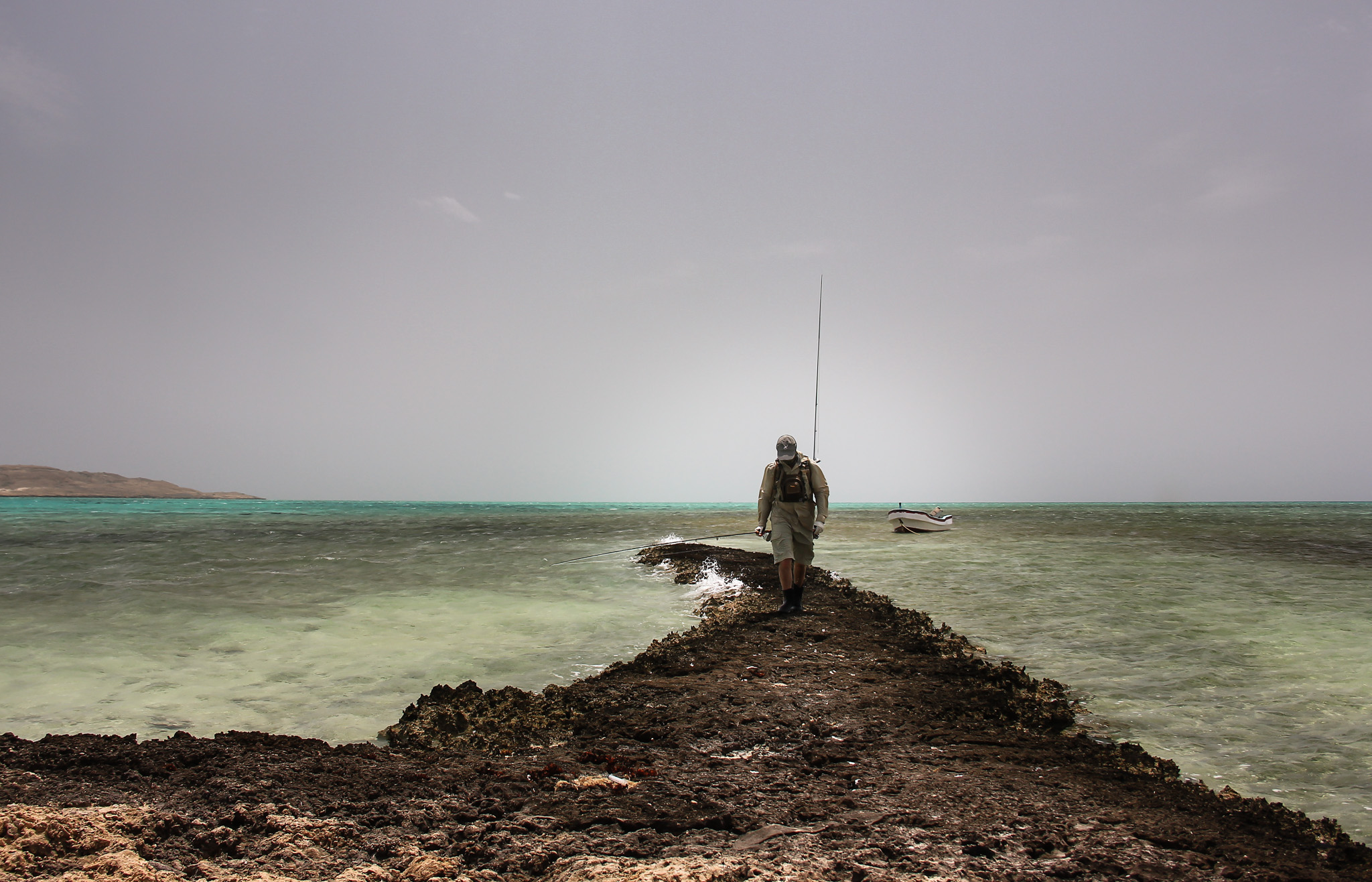 This left guide and angler equally frustrated but on the Nubian Flats, nothing falls on your lap.

Mike Murray realised this very quickly after getting his ass kicked by a 30kg+ GT just after lunch. This monster was hustling baitfish in such shallow water that half of his body was out the water and after eating the fly in spectacular fashion, it was only a matter of seconds before he was off the flat and heading for the horizon. If this was not enough, he took Mike right onto his spool, pulled him literally off the flat into deep water before cutting him off.

By the end of the session the guys managed to fool some triggers into eating though. Both Conrad and Andrew landed some really nice yellow margined specimens. 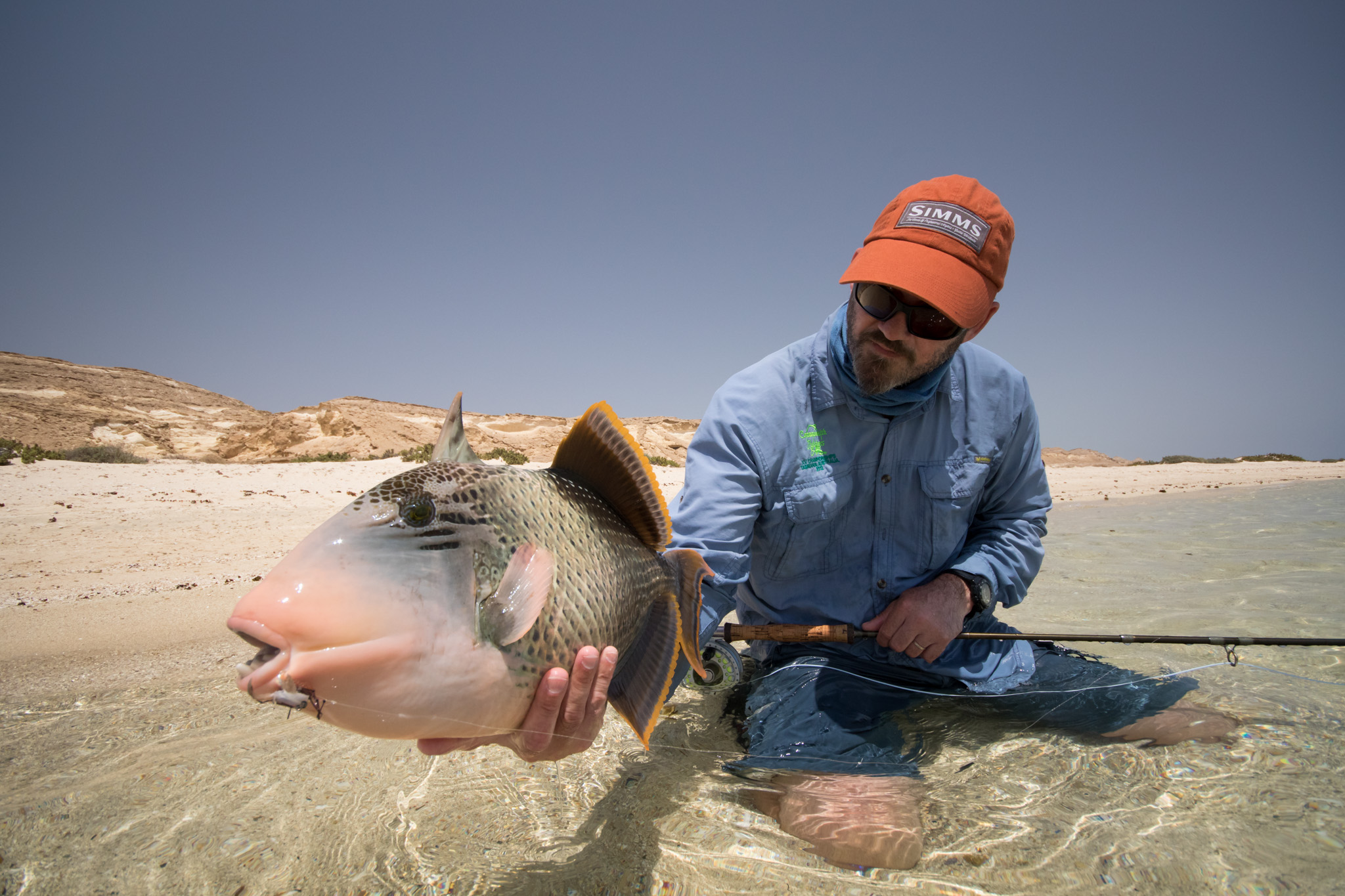 Meanwhile the guys fishing the Playstation was also knee deep in the action. The triggers were equally difficult but Mike La Sota kept the scoreboard ticking over and landed two really nice yellow margined triggers before lunchtime. Unfortunately our luck with the GT’s continued. Jeff also hooked into a brute right after lunch. He really brought the heat to this fish but unfortunately it was not enough and not long into the fight, this fish also found reef and got away.

The gents ended strongly though and Jeff landed a beautiful 8kg Bohar Snapper right at the death on tease.

After the GT action of the previous day, on day three, both boats started the day teasing off the edges, trying to make the most of the trevally in the area before walking for triggers. We raised some GT’s very early on as well as some solid sized bohar snapper and one very angry dogtooth tuna that went airborne before getting hold of the teaser. Both Mike La Sota and Jeff capitalised and landed some nice bluefin trevally as well as a nice bohar snapper and one GT. After the teasing we carried on walking the flats and found some solid sized triggers feeding as well as some bluefin that were out on the prowl.

The triggers were stilly very difficult but by the end of the day we managed to land 4 triggers with both Mike Lasota and Conrad Botes bagging two each. The latter also got to experience exactly how strong the jaws of a triggerfish were when the one he landed, got hold of his index finger. Fortunately it did not brake his finger but left him with a severely bruised finger and loads of pain. 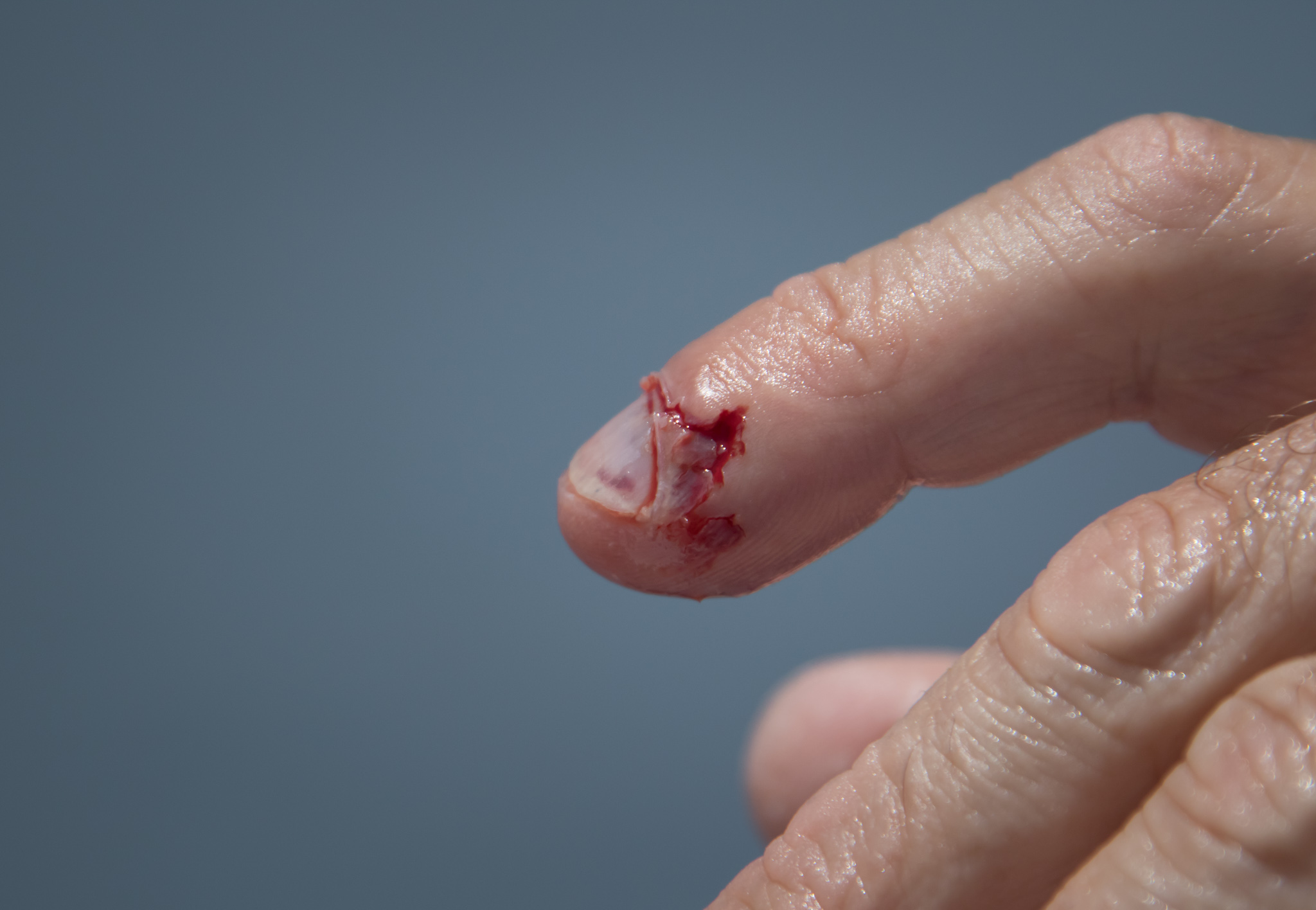 Unfortunately by day the dawn of Day 4, the wind picked up drastically from the north and by lunch time was reaching speeds close to gale force. We managed some fishing but the wind made the going very tough. The water was murky and rough and made seeing triggerfish near impossible. The lads persevered and by the end of the day managed to land one trigger and three small triggerfish.

Over the next two days the wind grew even stronger and we could only managed 1,5hours of fishing over these two days. We found a couple triggerfish but only managed to land one bluefin and present to one small GT bringing the trip to an unfortunate end. 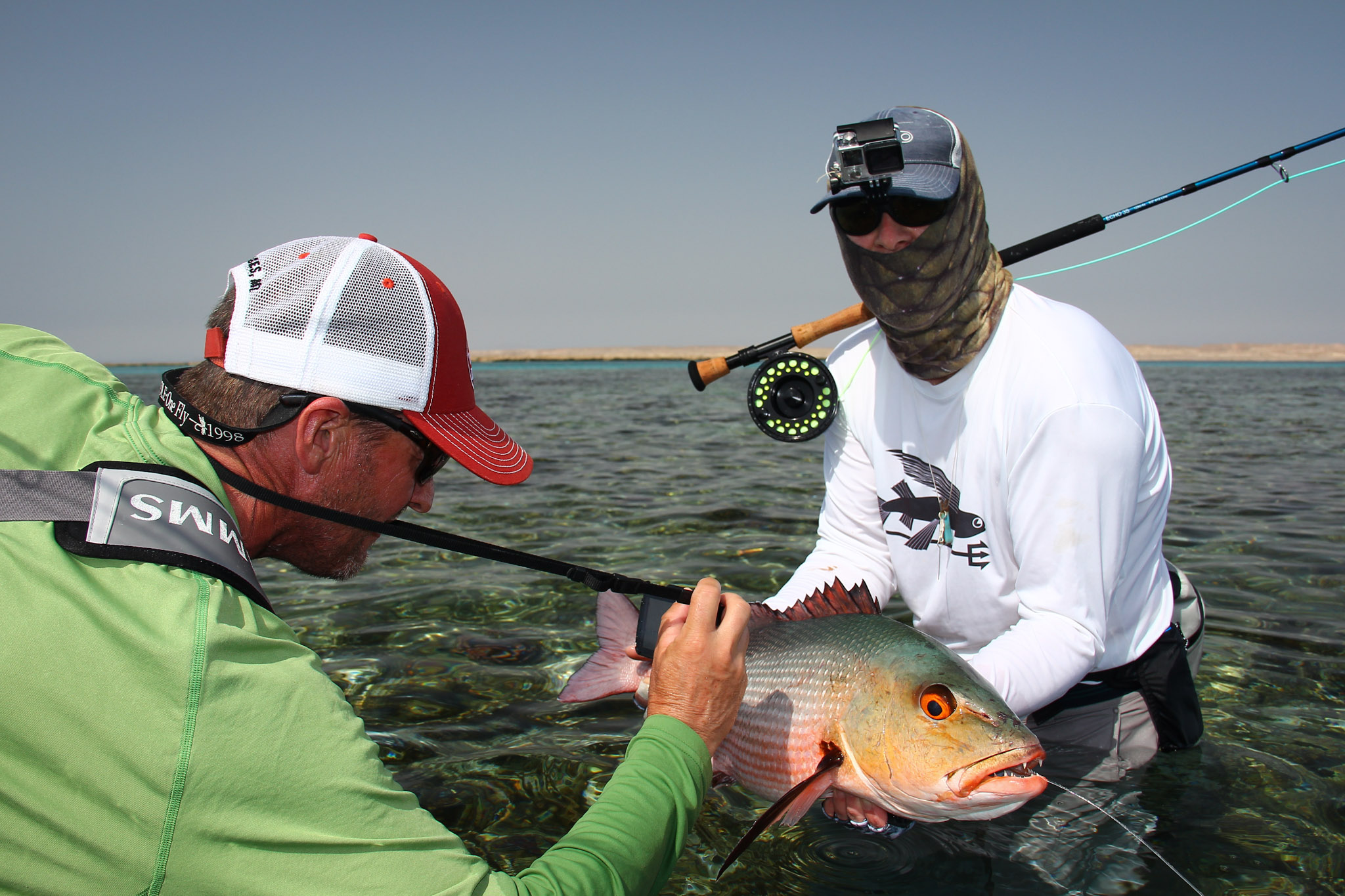 The weather forecast for the next week looks pretty similar with even stronger wind forecasted for the last couple days. Hopefully the weather will still improve but so far it seems we will be in for a really tough week.

That’s it for this week but check in next week for another update from the Nubian Flats.