The Whittingham group that joined us this past week from Aardvark McLeod was great fun to host. While the initial leg in Oman was a bit tricky as the fishing had been slow and the weather had been a bit challenging, a hearty dinner of barbecue Chicken put the guests minds at ease and the following two days in Oman were great fun. 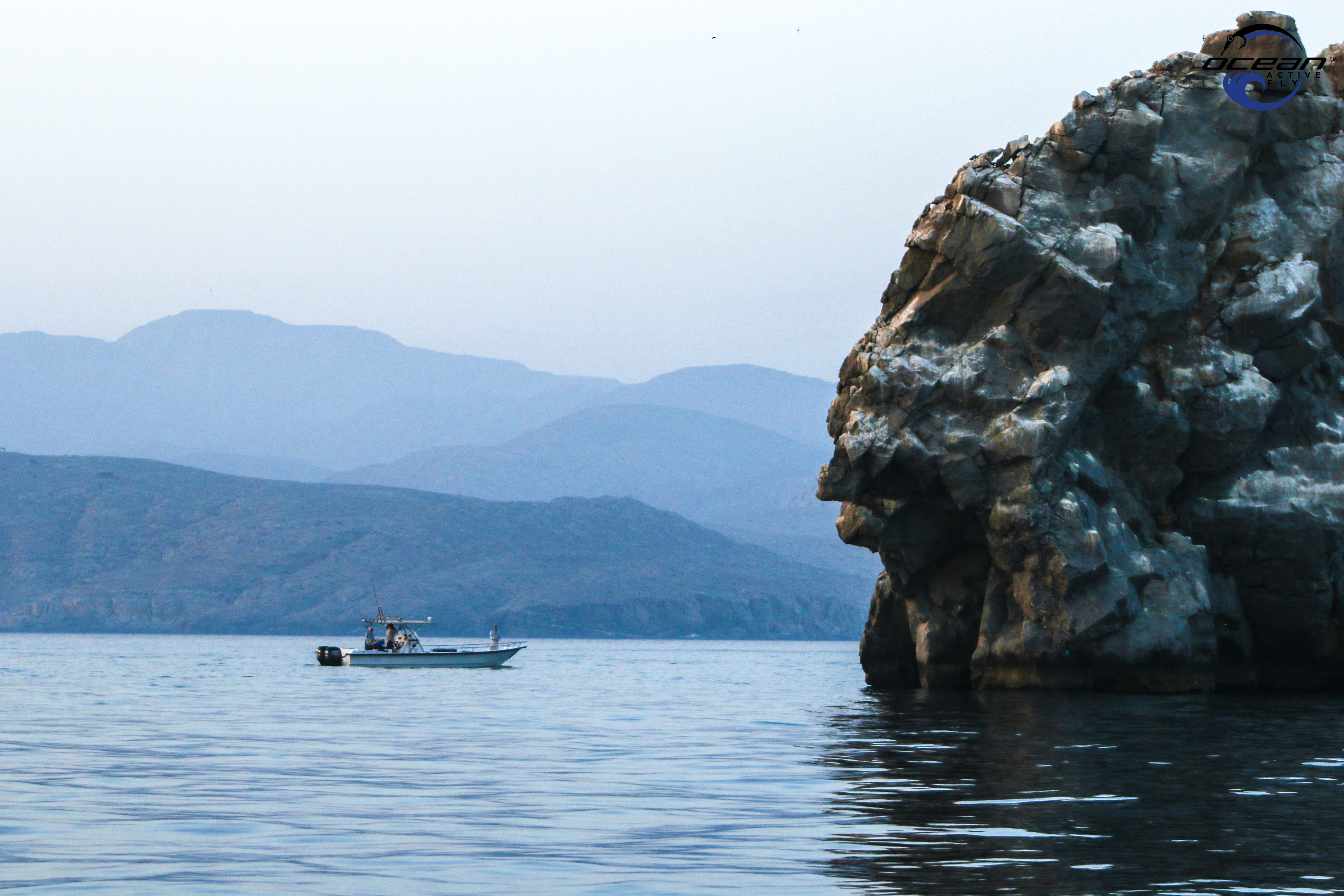 The approach to fly fishing this rugged terrain off a boat presents challenges in itself, even to the experienced anglers. With a little bit of coaching and reassurance we worked through it, group discussions over a few G&T’s and full bellies in the evenings proved positive and each guest woke up with determination to prove they could get it done. The group comprised of different backgrounds and nationalities which really brought a fun atmosphere to the table as they’re all friends and have fished together numerous times which really benefited the morale of the group to encourage the guys that were battling. 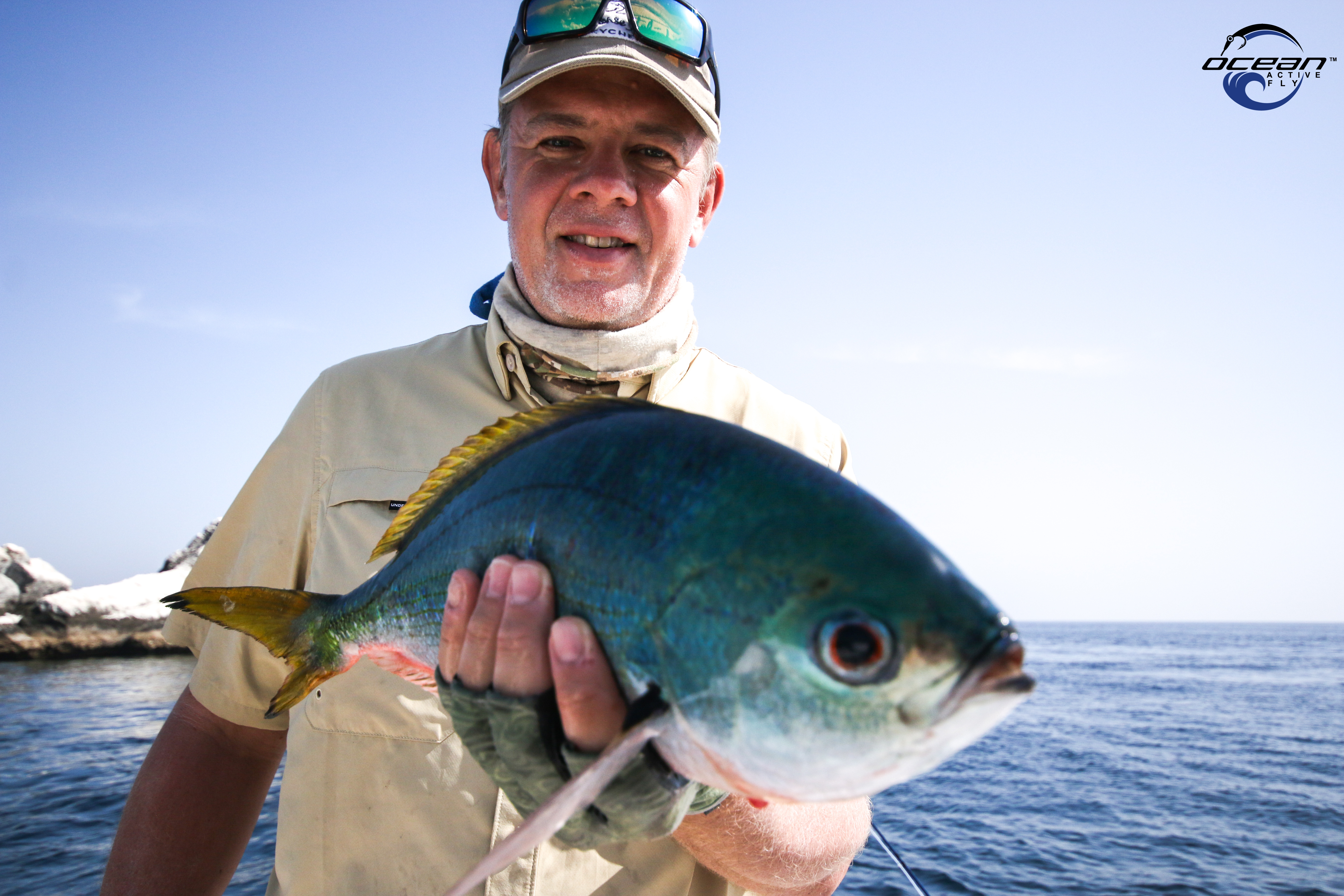 The final day of Oman was something from a scripted fishing dream. We had seen an enormous shoal of GTs stacked up in the current on the previous day, 30 m visibility with fish shoaling no more that 2 m below the surface. We all frantically scurried around, casting, teasing, and shouting only to watch this shoal of around 50 fish cruising slowly beneath the boat. They remained unperturbed by our presence and not interested in anything we threw at them. The fish ranged between 20 and 50 kg’s with some fish so large they initially appeared as two fish until they rolled side on as if to boast their dominance and size-up the hull of the boat! After reaching the end of the shoal, we re-positioned back above the drift along the same cliff and again we passed the shoal, this time only about 20 fish but with the exact same attitude and the company of a handful of spotted eagle rays riding the same upwelling inertia.

That sighting alone changed the atmosphere across both boats, the proof was now right in front of everyone in sizes and numbers but had yet to witness, now that they were visibly there. The vibe became ecstatic and the 12#’s were more welcomed knowing what could materialise at any point. On the final day we agreed to rendezvous back at a small pinnacle around Midday with one last sandwich and a catchup before heading back to pack up and make the journey back to Dubai. “One last drift, one last drift, let’s get a queen for the road!” was the call from Gary and Gran. 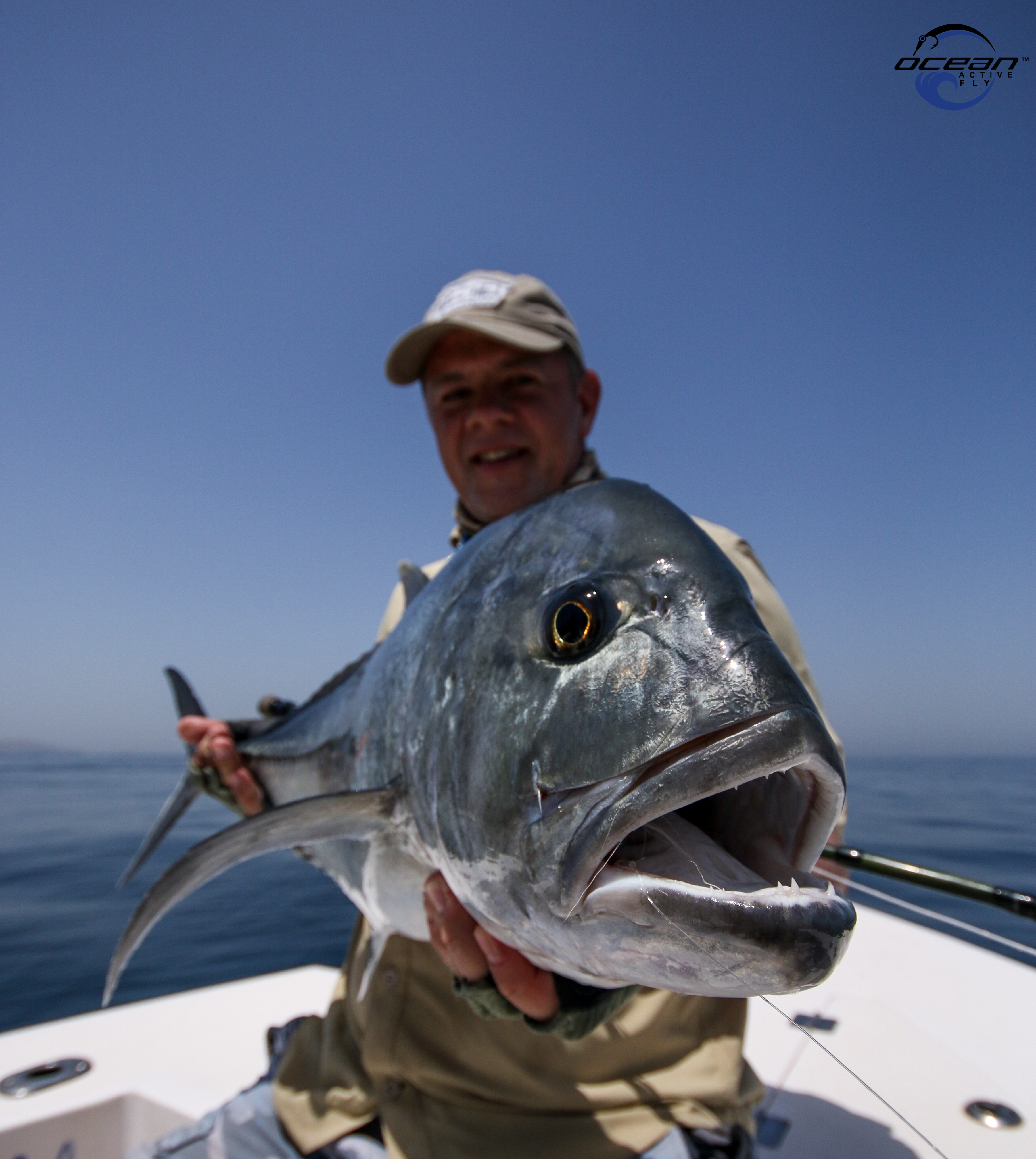 We slotted in behind the big boat where Nigel and Malcolm had been fishing, current ripping across the outside edge of the rock, deployed the small teaser to pull the queens up. The shoal came crashing after the teaser directly over Grants fly, NO BITE! Unbelievably the shoal peeled off and almost out of sight were intersected by Gary’s intermediate he’d left sinking off the stern, shouts of BIG STRIPS! Echoed across the boat and the queenfish lit up again and followed the small clouser back up only meters from the boat. 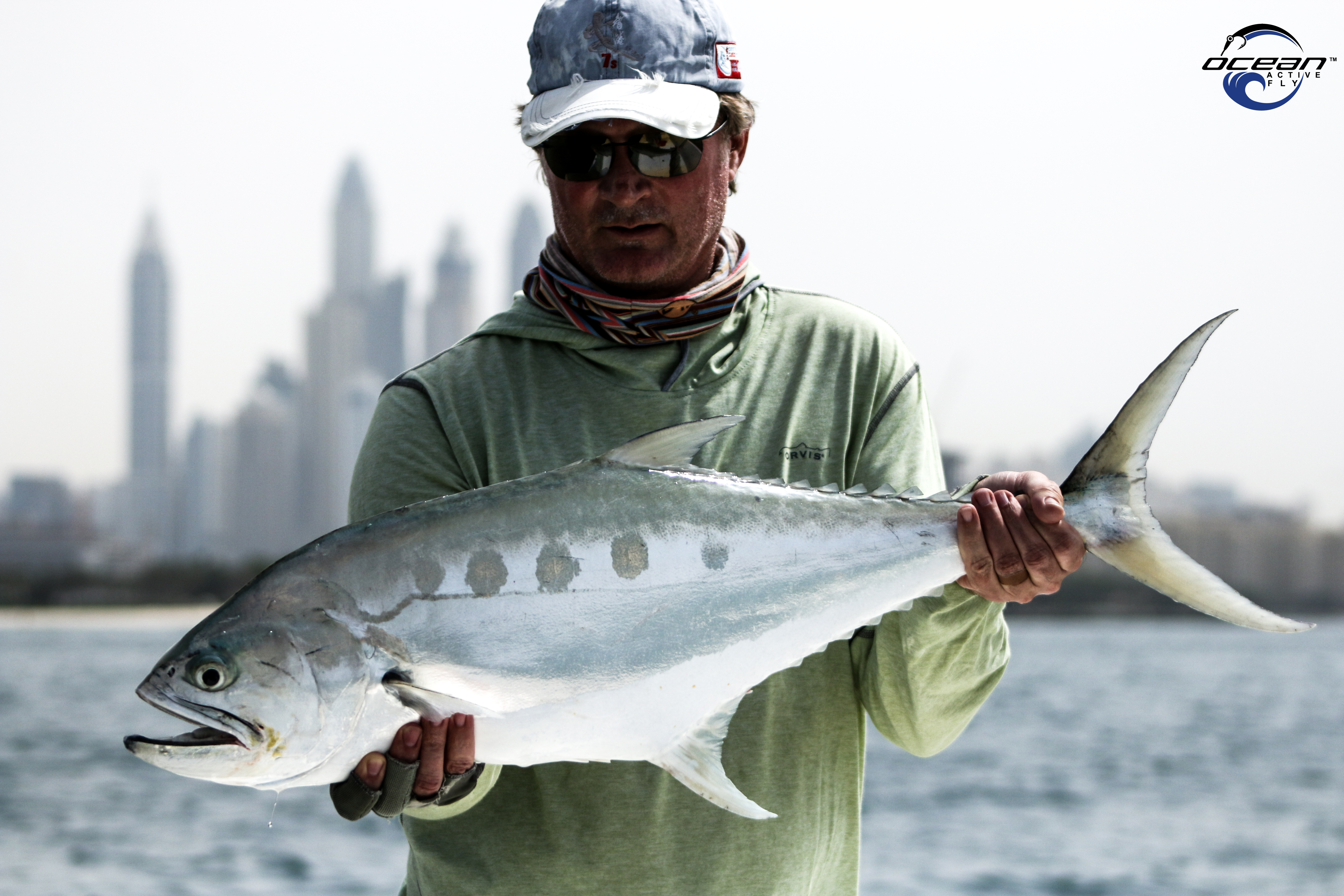 As the last of a handful of queenfish gave a poor effort at snatching at the fly, a fat, black shape tore through the queens and absolutely crushed the small brown/white clouser. Having identified the fact that there were no queenfish markings on this chunk of fish, I roared GT GT GT! Gary was already halfway into his backing and Anura (our Sri Lankan captain) was backing us into deep water to get off the dangers of the rocks in front of us. The call to ease off the drag once we drifted into 100m+ water can only be described as divine intervention. Upon tailing the fish, Anura pointed out a wind knot in the 30lb flouro leader….What a truly spectacular way to end the Oman leg of the trip! 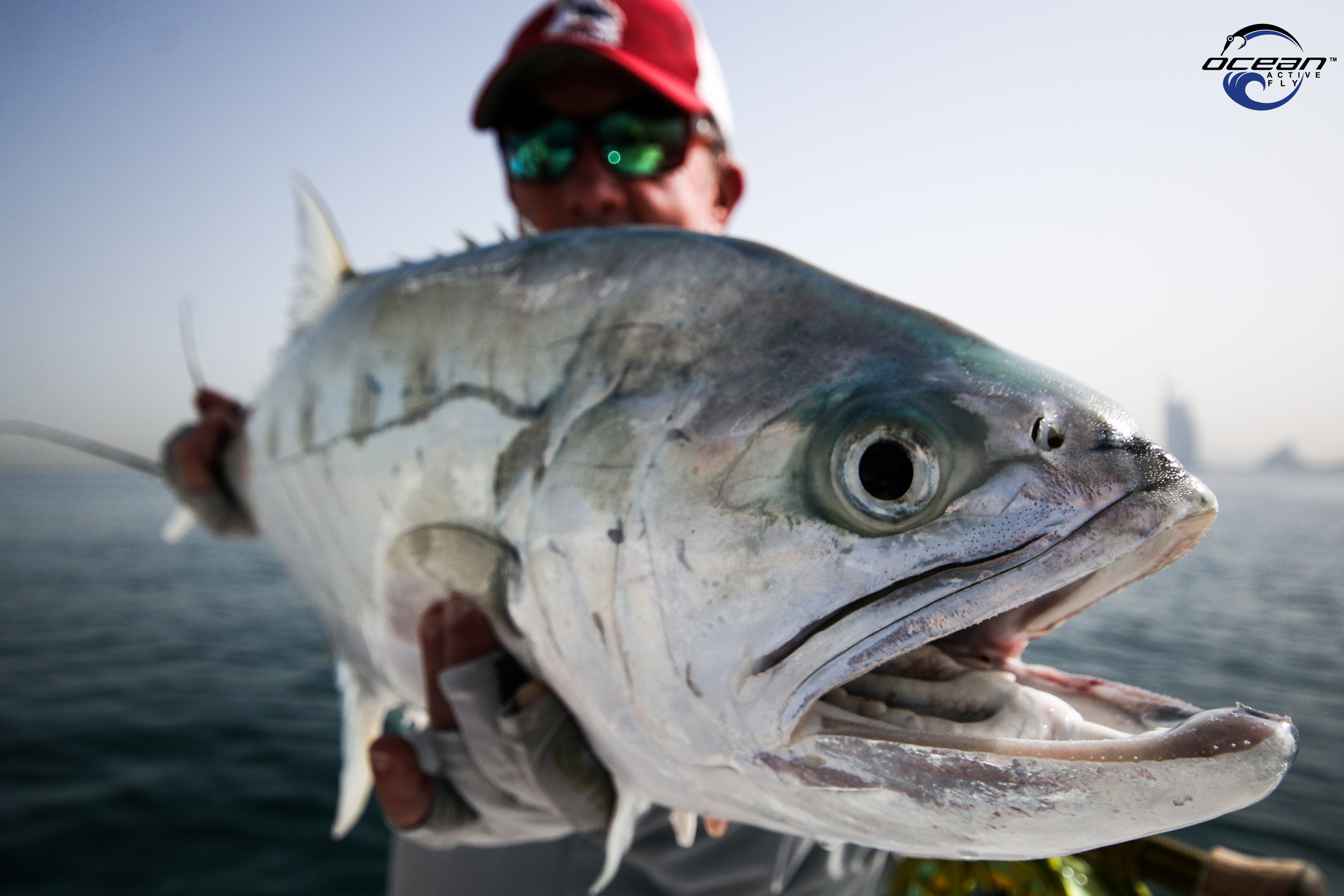 Dubai was the contrast; three days of queenfish slaying is always a welcoming experience. Day one saw everyone bent on a number of awesome fish, double ups, triple ups, double figures between anglers before lunch and all the fish were photo worthy. 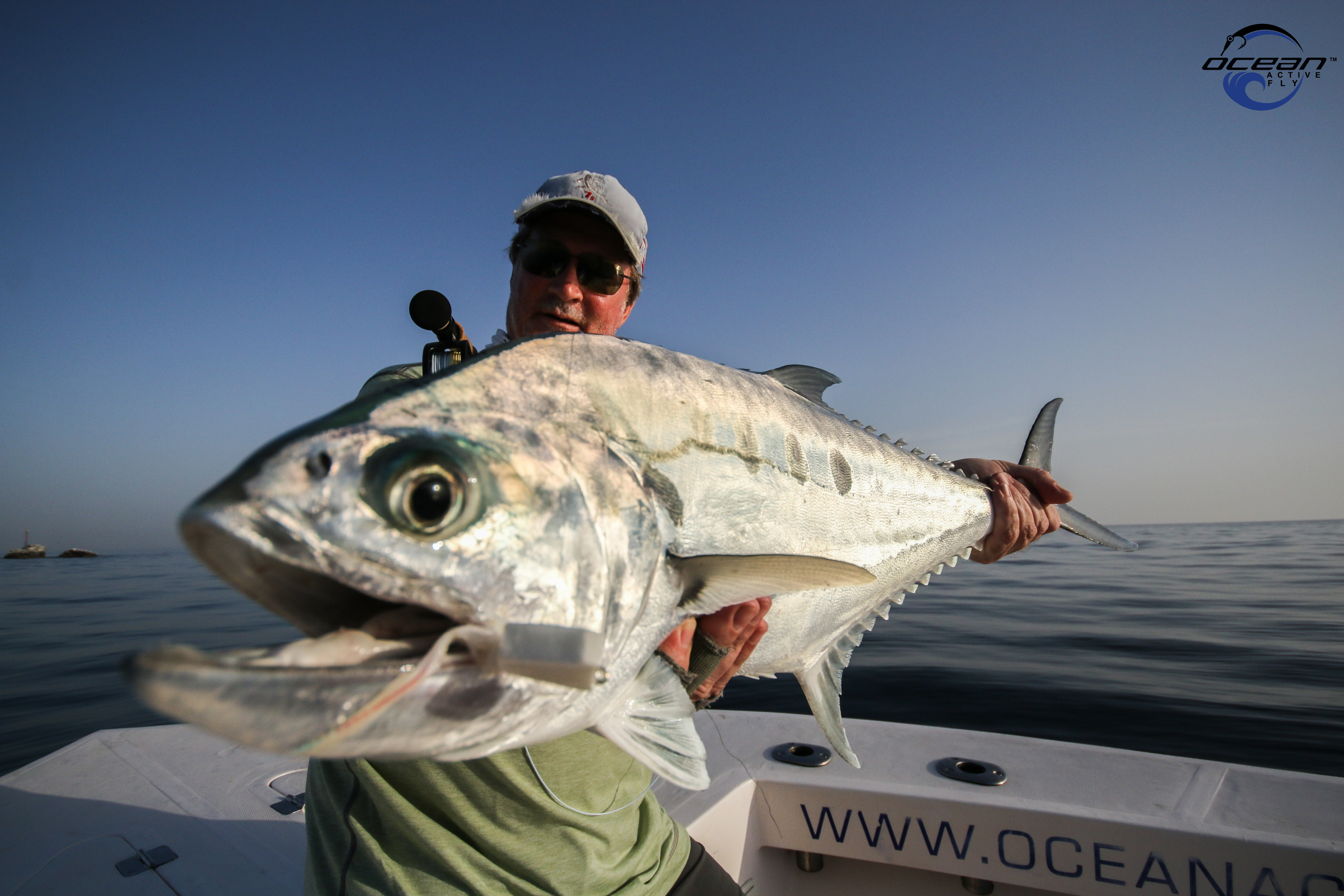 We hit up the One and Only restaurant on The Palm for lunch and after the first bottle of wine was drawing to an end some wind came through quite abruptly and the boys decided they had caught enough fish and we spent the majority of the afternoon discussing politics and golf. Over the course of the three days the group were treated with a couple very nice golden trevally in the mix and even a few run-ins with the razor gang king mackerel and barracuda. 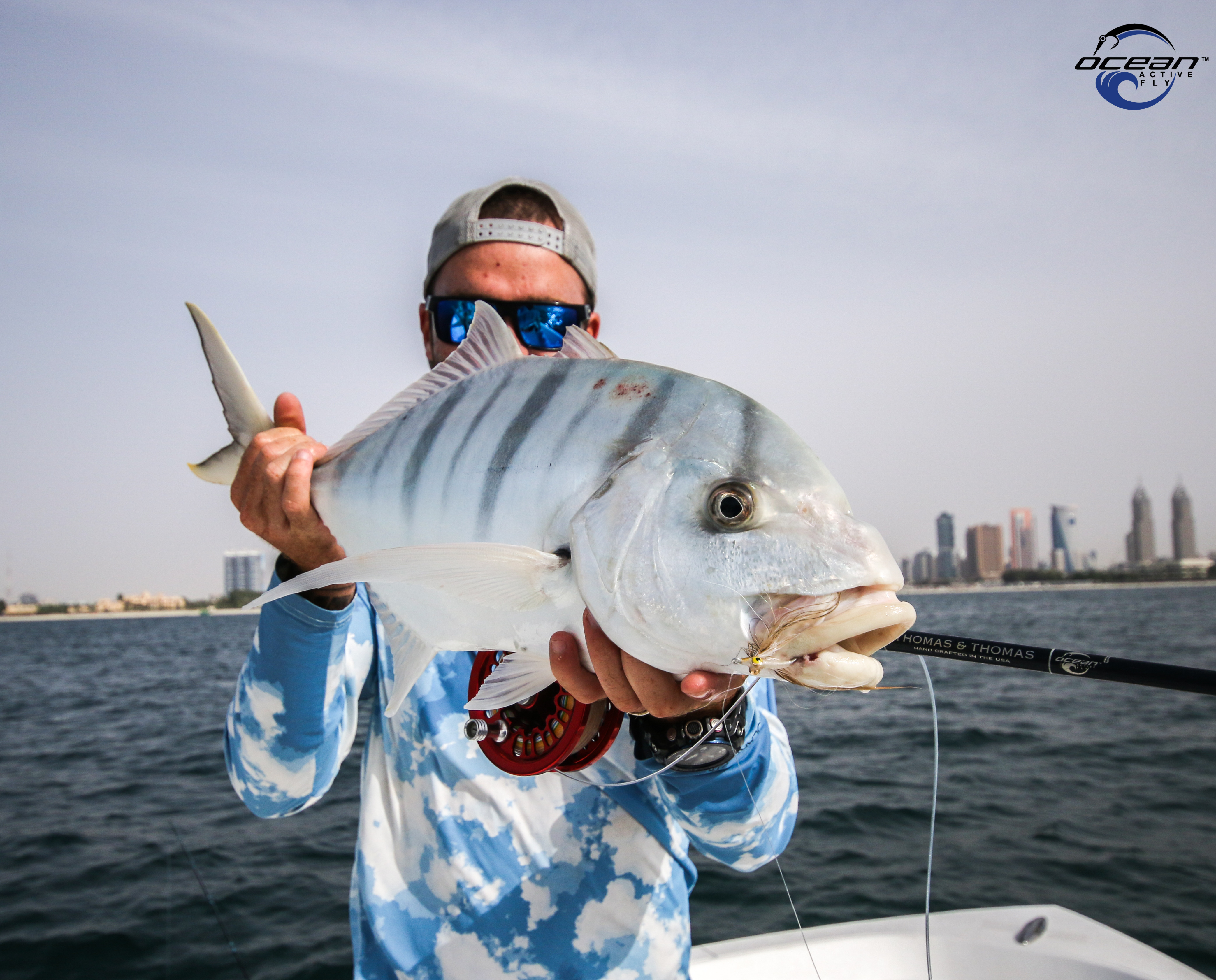 All in all it was great fun, great banter, some amazing sightings and the cherry on the top was getting the guys hooked up to different species in Dubai to round up six solid days of action.