From Oman, the first report of a striped marlin, caught on fly.

With the Oman season coming along well we decided to give the Africanus a rest this week and head offshore for some pelagics. The red tide has finally dispersed leaving a clean deep blue ocean, perfect for trolling the drop off. With plenty of bait around we knew it would be an exciting few days that lay ahead of us….and we were not wrong!!!

The first morning we had nearly made it to the drop off, which is only 15 minutes from the marina, before we saw tails. A school of 5 to 7 brown sickles slicing through the water right in front of us. Now most people who know me know that sailfish DO NOT like me, at all! I have hooked and lost plenty, I have fished for billfish quite a few times and have landed Black marlin and a Striped marlin on fly, but no Sailfish! So I was somewhat unprepared and unbelieving when Brandon started to shout ‘Saily’ get your rod ready.

Turning the boat towards them and coming past them with the teaser all I could do was stare in bewilderment. I have never seen free swimming sail fish before and they were awesome, graceful yet determined and they moved with some speed. I clutched my rod and tried to look prepared as we edged in front of them. I watched as they sped up, turned off course and their fins disappeared below the surface….within seconds the teasing rod started to scream. I could see a long dark brown wand waving back at us from behind the teaser like a windscreen wiper battling with heavy rains. Boat in neutral and teaser out of the water, he shot, lit up like a christmas tree towards the boat searching for the teaser. I botched the cast too early and he turned onto my fly as I popped it through the water, grabbed it but I didn’t manage to set the hook……a few choice words ensured! 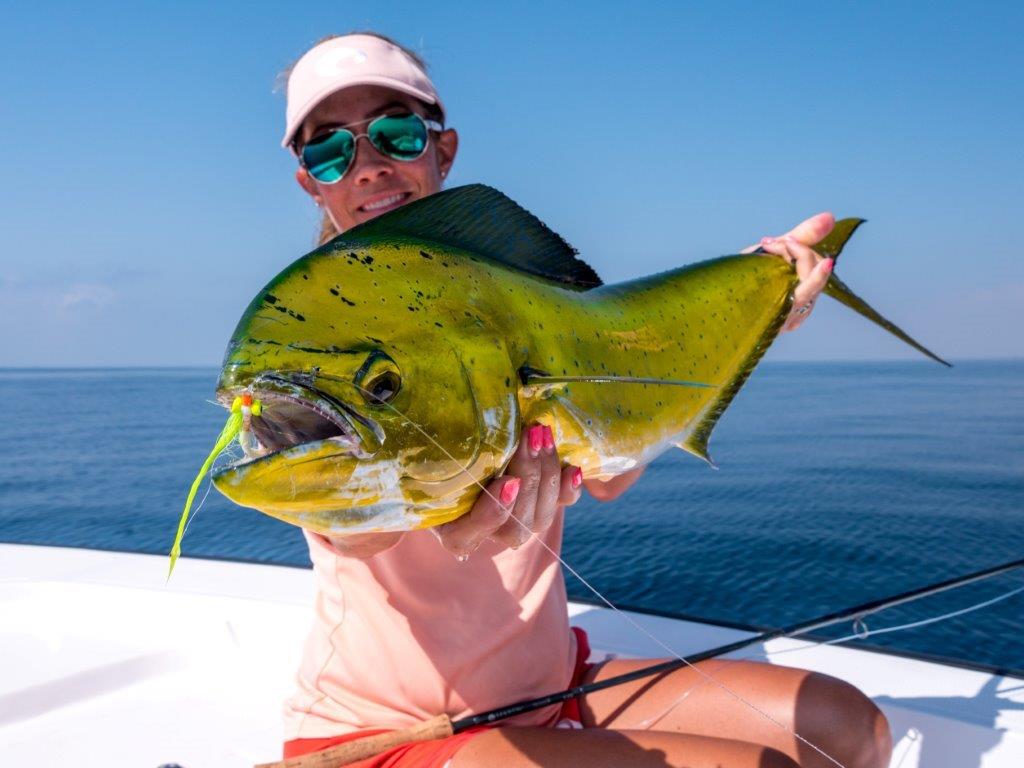 We carried on for the next hour in silence, Brandon shaking his head and me kicking myself….maybe I should just pretend it was something else next time!!! By the afternoon however my worries had disappeared as a plethora of Dorado had appeared. These beautiful bright green and yellow fish are awesome to target on a fly rod. The rush of seeing them charge the hookless teaser from up to 50 meters away like  bright green torpedoes gets your heart racing. Once hooked a display of angry ariel acrobatics ensures which is a spectacle to be seen. These fish are tricky to net as they don’t like the boat and you have to get pictures quickly as they are especially not keen on being held.

Day two and again we came across a free swimming sailfish just cruising on top of the water as we reached the drop off. This guy however was not so keen to play with us and slunk back to the depths almost immediately. I jokingly made a comment that maybe I would have more luck if we went for Marlin instead….Brandon wasn’t amused!  We trolled till lunch time raising a few Dorado and some Tuna along the way. The sea was flat calm and deep blue, perfect for sailfish. I was just relaxing,drifting slowly into a lovely dreamy sleep on the front of the boat whilst trying to even up my vest tan (not a very sexy look) and Brandon started shouting…

No time to get dressed again I threw on my hat and glasses and grabbed my rod ready.

There he was, only this didn’t look like a sailfish, a thick black bill was waving agressivly back at me from behind the teaser and I could see glimpses of his bottom bill too.

Brandon stopped the boat and started teasing it towards us, all I could see were electric blue pectoral fins and lit up stripes slashing aggressively at the teaser. I put out a long cast and popped the fly through the water, he turned back and at great speed lunged for my fly. As its bill broke the surface I could see the anger in his eyes and the piercing blue lights along his body.

“Set it, Set it” shouted Brandon.

I set the hook and held on for the ride, in seconds I was half way through my backing and my heart was racing. The following moments where a blur as he threw his body into the air shaking his head, trying to dislodge my fly, stunning ariel acrobatics followed by bursts of speed, all I could do was to hold on, watch, oh and pray. ALOT! 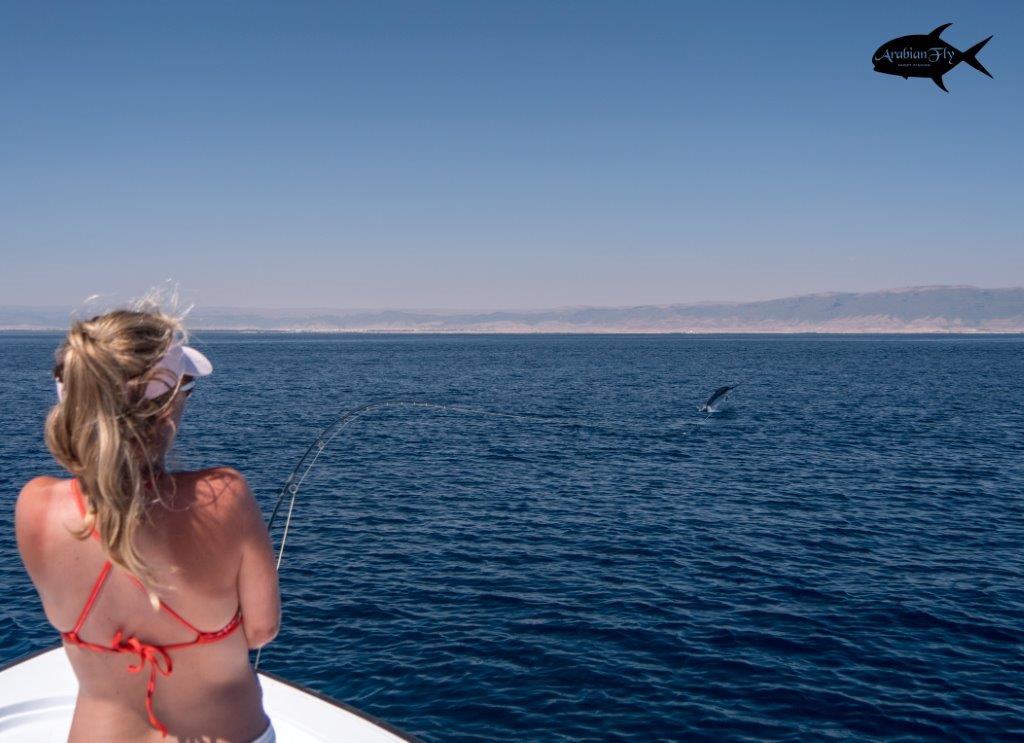 The following hour seemed like a lifetime as we battled with each other, gaining and subsequently losing fly line and backing. Towards the end he decided to get clever and kept turning and swimming under the boat round and round in circles. I was fading fast, and not a word had been spoken on the boat, accept to instruct each other as to where and what this monster was doing.Time stood still and all I could hear was my heart beat in my throat. As I tried to position him along side the boat Brandon grabbed the leader, easing his head up and grabbed the bill. We erupted, the first striped marlin to be landed in Oman on a fly rod! 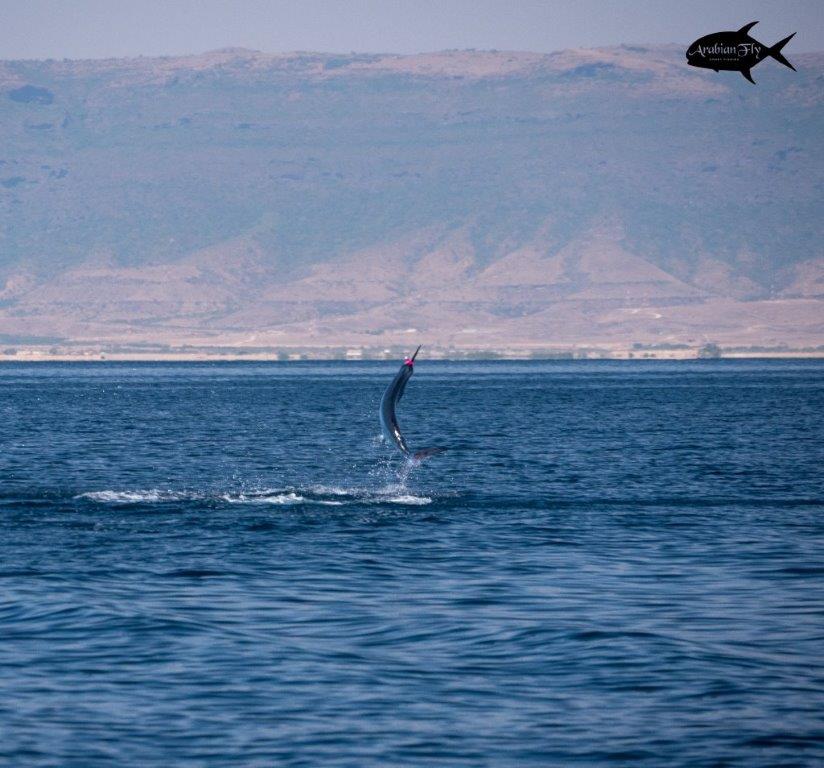 Quickly swapping places I grabbed his bill and stared deep into its dark brown eye which was flecked with electric blue, his dorsal and pec fins were still lit up as well. It felt like he was giving me the once over, his huge eye checking me out intently,  then the boat and the situation in general, as if he were sarcastically congratulating us on winning….well this time anyway!A few quick pictures and we started to cruise slowly to breath him. He was still nice and fresh and his tail was gently swaying in the water. I knew he was ready to go once he started biting down on my fingers so with one final push away from the boat I watched as he slunk off back to the depths of the ocean, without so much as a wink goodbye! Another epic day on the water here in Southern Oman and one I will not forget quickly. 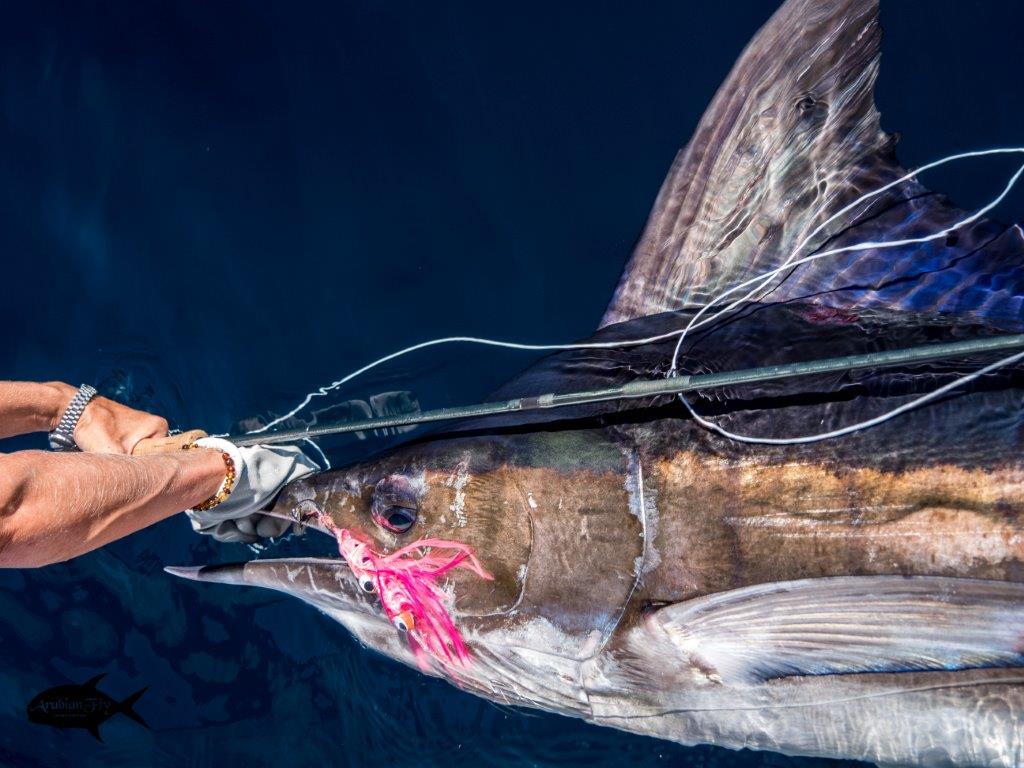