Returning to your roots

Like many fly fishermen I began life as a trout fisherman. It was not until I was ten or so that my family began to dabble with salmon fishing, and not until I started guiding at sixteen did I really find out what I was doing. Through all that time I have always been a trout fisherman whether it be fishing chalkstreams or lakes. Many of the skills I learnt stalking trout on clear flowing waters or hitting rising fish at range on a lake have stood me in good stead and translated easily to saltwater when I started bonefishing 12 years ago. 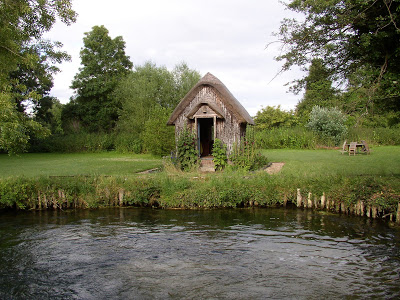 I recently moved into the Test valley, which has been a life long ambition, so I have moved to the home of fly fishing… to where it all began. These are the rivers that the likes of Halford, Skues, Hills and Barton refined our sport from blowing a live insect on long rods to the modern form of casting a fly and targeting individual fish. For those that have never read their books I would highly recommend it. Not only does it open a window on the history of our sport but also teaches you a huge amount. The advances they made at that time are still current and the amount of scientific detail that they learnt from observation is extraordinary.

Moving down here obviously has its benefits, and during this summer I decided to take my father to fish one of my favourite beats on the river where the Dever meets the Test. I booked this through Howard Taylor at Upstream Dry Fly who has access to a number of fantastic pieces of the Test, Itchen, and other prime chalkstreams in the south. 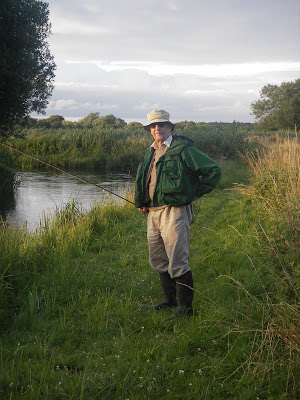 My father had only ever fished the Test once in his life as most of his chalkstream fishing is confined to Norfolk, so this was a real treat for both of us. We arrived on the beat early so that we could make a day of it, and as we arrived the mist was just clearing off the meadows. The weather over the previous week had been a little tempestuous, but we were relieved to see that the it seemed to be holding. As the two of us tackled up by the car the mist began to evaporate revealing the most stunning clear water of the Dever.

As I used to guide on these rivers a while ago I knew this particular stretch well, and we headed off down the bank eager with anticipation of the day ahead. It seemed like every lie and depression held a good sized brownie, and starting at the bottom we edged our way along hunting.. I small hatch of blue winged olive started, and there, suddenly on the edge of the next bend was the kiss of a rise. My father worked some line off the reel and lengthened his cast before gently dropping the fly on the surface. I watched the fish in the water, the fly was a little wide. The fish twitched as it went past, but did not make the effort to move too far out of its line.

“A little further to the left” I indicated. Again the line sang through the rings and the this time the angle was right. Almost as soon as the imitation CDC olive hit the surface the fish rose to the surface and sucked it down. He struck and the little Thomas & Thomas bucked as the brownie shot down past us. After a few short run he brought it to the net and I quickly released it. A lovely fish of about 2 lbs. We took a few more fish as we moved up the stretch until we came to the confluence of these two rivers. 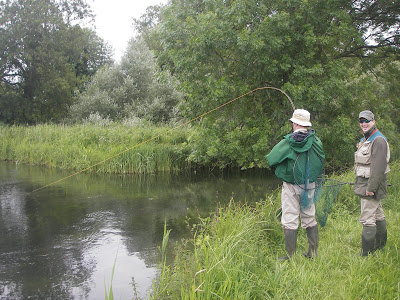 A fish rose out in the middle of the main Test, quite a long cast up from us. I suggested trying one of Alistair Robjents’ daddy long legs patterns that I have always found a killer here. These fish see so many Mayfly patterns they will often hit a terrestrial pattern rapidly. It always amuses me that it works so well, especially as J. Hills describes it as “rather common and not worth imitating”. I tied one on and my father had to really punch a long line up into the middle of the stream. As he hauled the line you could almost hear the little 8’6″ protesting about the treatment. I have always admired my father’s casting as what he lacks in power he makes up for in finesse. I have never been a particularly elegant caster, mostly making up for my bad timing with power, so it is always a pleasure to watch him push his envelope a little. That fly sailed up the river, landing a good twenty to twenty five yards upstream. 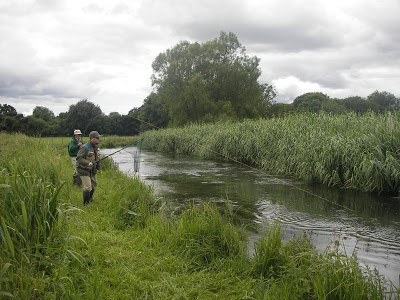 A fish of about three pounds came bodily out of the water to try and smack the fly and in his excitement he struck the fly out away from the fish. Cursing. The fish had not been pricked though, so out flew the graceful arc of line again. the fly dropped, drifted for a yard and then disappeared as something large engulfed it. This time dad uttered an expletive as the fish tore line off the reel…. upstream….. The little rod was bent right over in a long curve, the little Hardy reel squealing its protest. I don’t think it had ever really been tested like this, and I noticed dad was now palming the rim to prevent over run. there went the backing joint followed by ten yards and then twenty yards of orange backing. 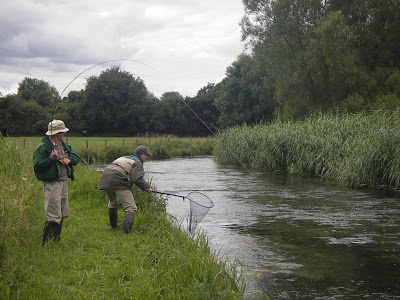 “That is a serious fish dad!” I said as I went for the net. He grimaced as the pressure on that fine tippet began to increase. The line slackened, and I thought the worst had happened… but no, the fish was now heading down stream towards us. We stampeded down the bank trying to stay in touch with it as he reeled frantically. The large trout was now holding in the current above us, almost opposite where we had been standing as he hooked it, and I could clearly see the Robjents’ Daddy sitting snug in the scissors. I inched my way down the bank with the net extended, muttering directions to someone who really did not need them. Habit I suppose, but quite annoying, so I quickly shut up. As I sank the net in the water dad began to pump the fish over towards us. To begin with he had very little effect, but slowly the trout began to tire and he moved slowly in my direction. As he moved over the net I raised the edge and he was ours. My father’s face split into a huge grin, the pressure now over. I would never have let him forget it if he had lost it! My wife, who had been snapping pictures furiously, caught the moment perfectly. The fish weighed in a 6 1/2 lbs, and is his biggest fish from a chalkstream. 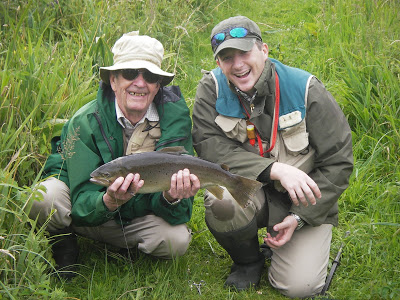 After a fantastic lunch at the Peat Spade Inn, the three of us hooked and released a good number more, especially when the evening rises really kicked off. I think I can say that it was one of the most perfect days I have had on a chalkstream. It is always a pleasure to fish on these historic waters and for me it is just great to be on the river, watching the world go by. My father and I have been fly fishing together since I was about seven. I remember scampering along the bank after him, learning about the creatures and insects that inhabited this environment, how they made up the trout’s diet, or having him tie on my flies or untangle my latest mess. It is great to be able to return the favour.