We are glad to start a new year fishing at the End of the world, Happy new year!!!!

River is much lower than expected and crystal clear; not usual for this time of the year. Level is around 3 foot lower than normal. The weather was mostly rainy and cloudy with no wind during the first week.

The first couple of days the fishing was not easy, due to the low number of fish into the system (the low water was holding them back), with the sea-pool being the best option during the first week of the season. The fish were there trying to find the way upstream and did finally during New Year’s Day, staying in the first few pools of the river above the tide for the rest of the week. 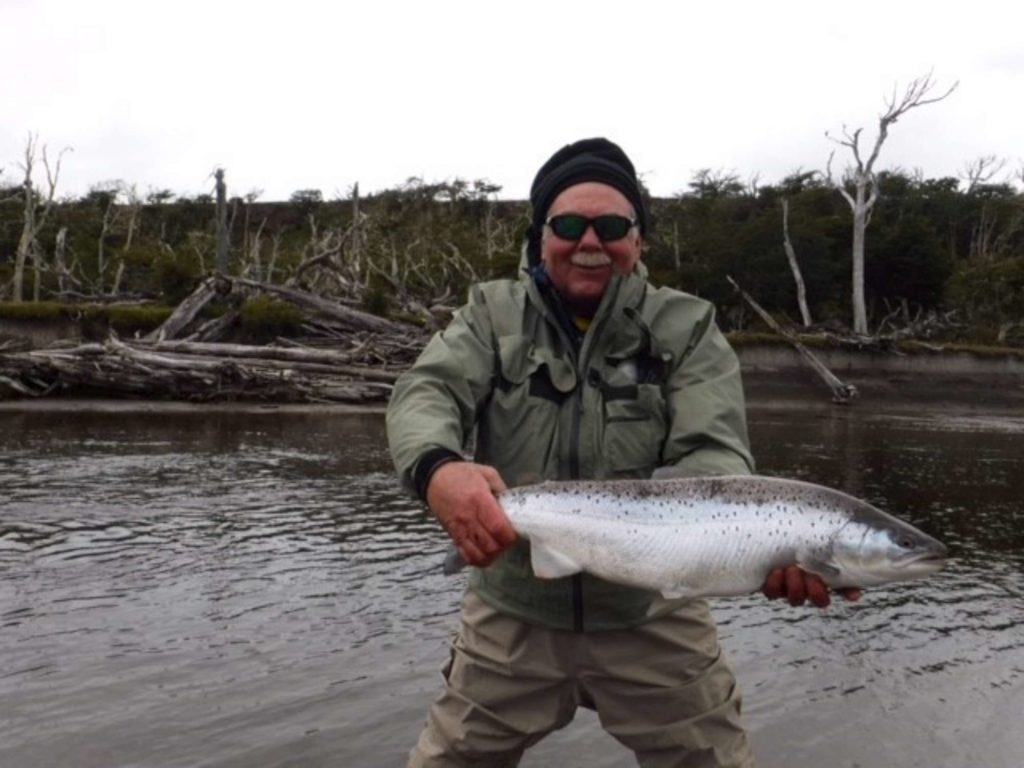 Best flies were big leeches and woolly buggers in dark colours and best lines were light sink tips and floating lines with sinking tips between 5-7 foot.

The tagging program has started with 12 seatrout between 4-16 pounds, which were caught by Daniel and David from USA. 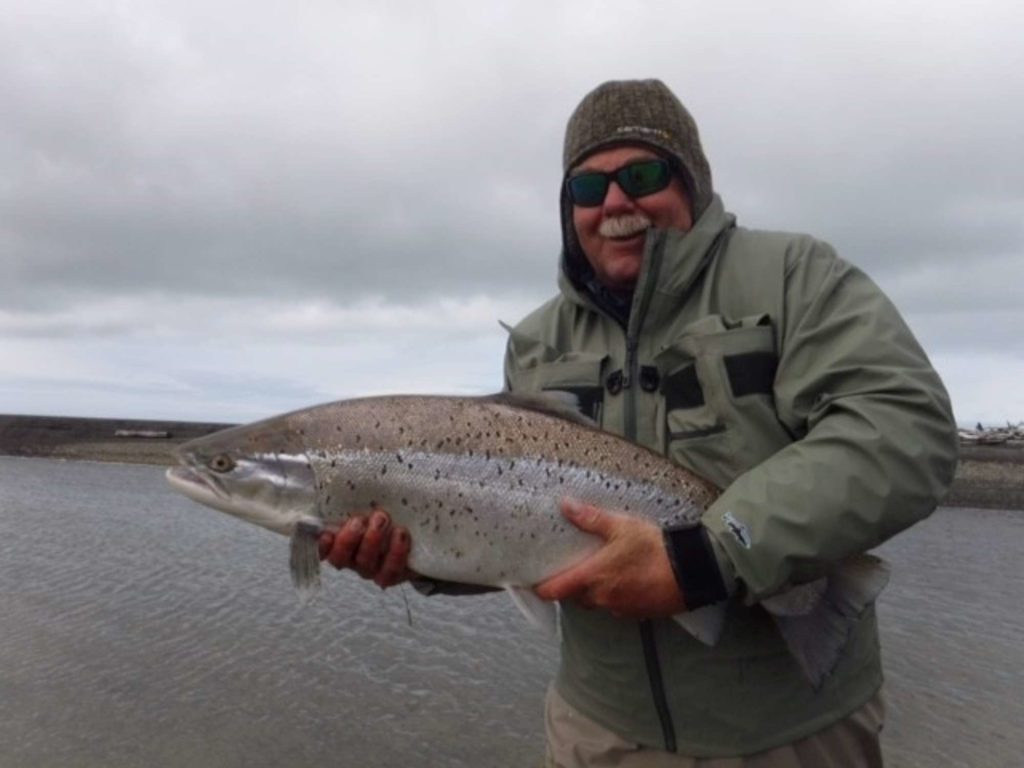 Memorable battle was the one David has the third evening in Juoni’s pool with a big fish that took the leech on the strip and ran straight to the logs. Even with the experience of the angler the fish got lucky and finally after a long fight David lost the battle. 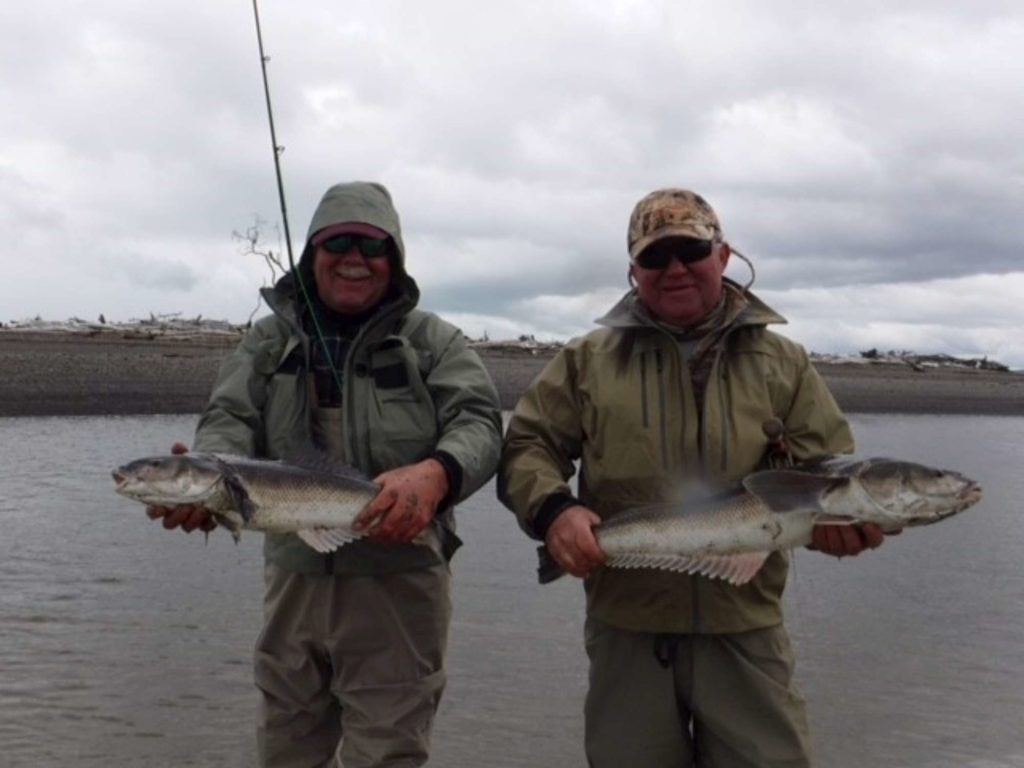 By the end of the week the river started to rise due to the rain and more fish start to show up and run upstream with good fishing in the first pools of the river.

The second week of the season has just ended at Worlds End Lodge. We received Murray, a very experienced angler and also Spencer, Charles and Jeremy, who were first time sea trout anglers.

The river is dropping off, with really clear water. The days are sunny much hotter than usual for this region. A good run of fresh fish from 8 to 11 pounds are now in the river. Most of the fish are holding in the lower parts of the river, so most of the time guides and anglers concentrate their efforts in beats 1 and 2. This is the area that presents the best opportunity of landing a good sea trout. Sometime the fish is landed and sometimes it is missed, that’s the game on this challenging river. 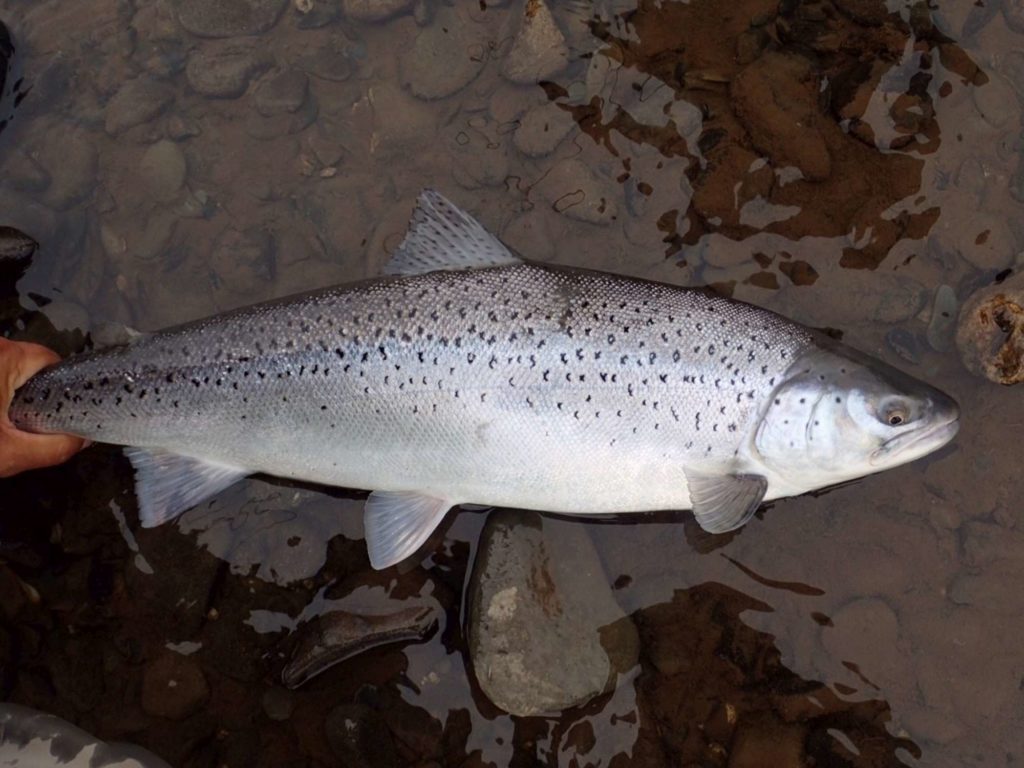 Best fishing is during the evening sessions, when most of the fish are hooked on black leeches that include some flash; either silver or blue. Also fishing tube flies and sunrays with fast stripping is working, looking for fresh fish at Sea pool and some of the first pools of the river. We have the privilege to tag another 9 sea trout as part of the conservation program this week; these tend to be the biggest sea trout that we land, as not all sea trout are tagged. 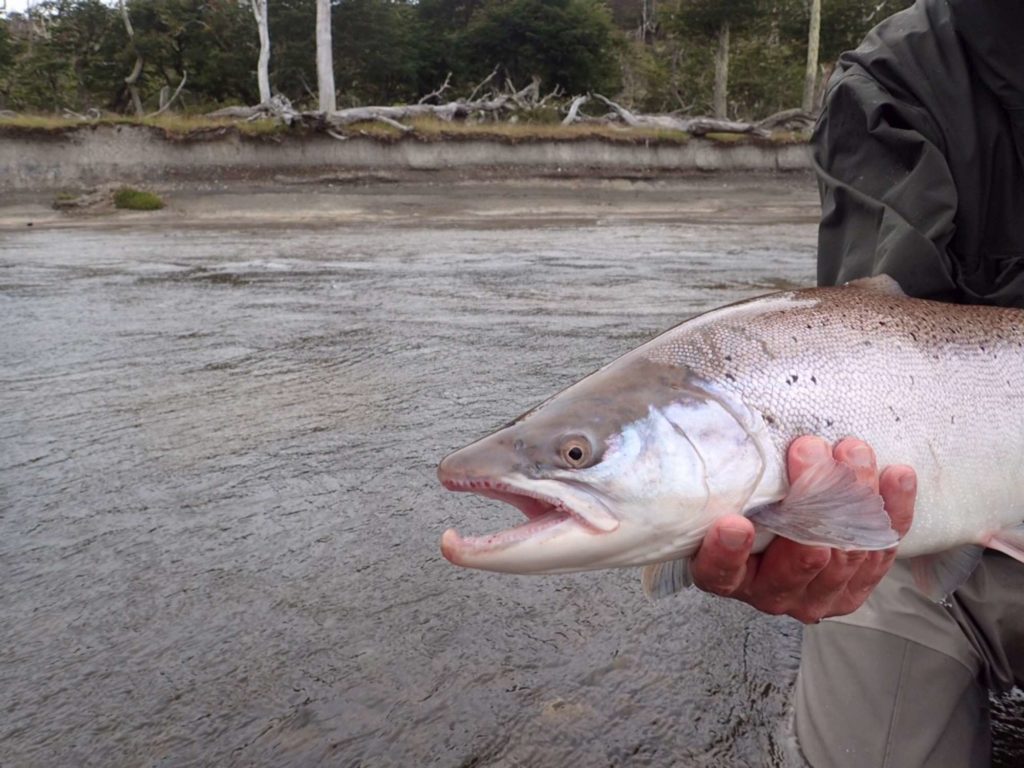 Also, some good size Robalos were landed this week, with the high tides at the mouth of the river and at Sea pool. These are great fish to target and catch, being very strong. They are a great alternative if the river is slow or the weather very hot.

A memorable catch for Charles was a very strong, fat and fresh sea trout about 10 pounds that he hooked in the last cast of the last day at the End of the World in Irigoyen River. Congratulations Charles.

We are at already in the middle January and the sea trout run is gaining momentum. They are a bit laters this year, but this is largely down to the river height, which has inhibited their progress into the river. Any sign of rain or a slight fluctuation gets things moving. Lots of fresh fish are being seen in the lower river and some good chrome fish are holding in some of the first deep pools above the tide. 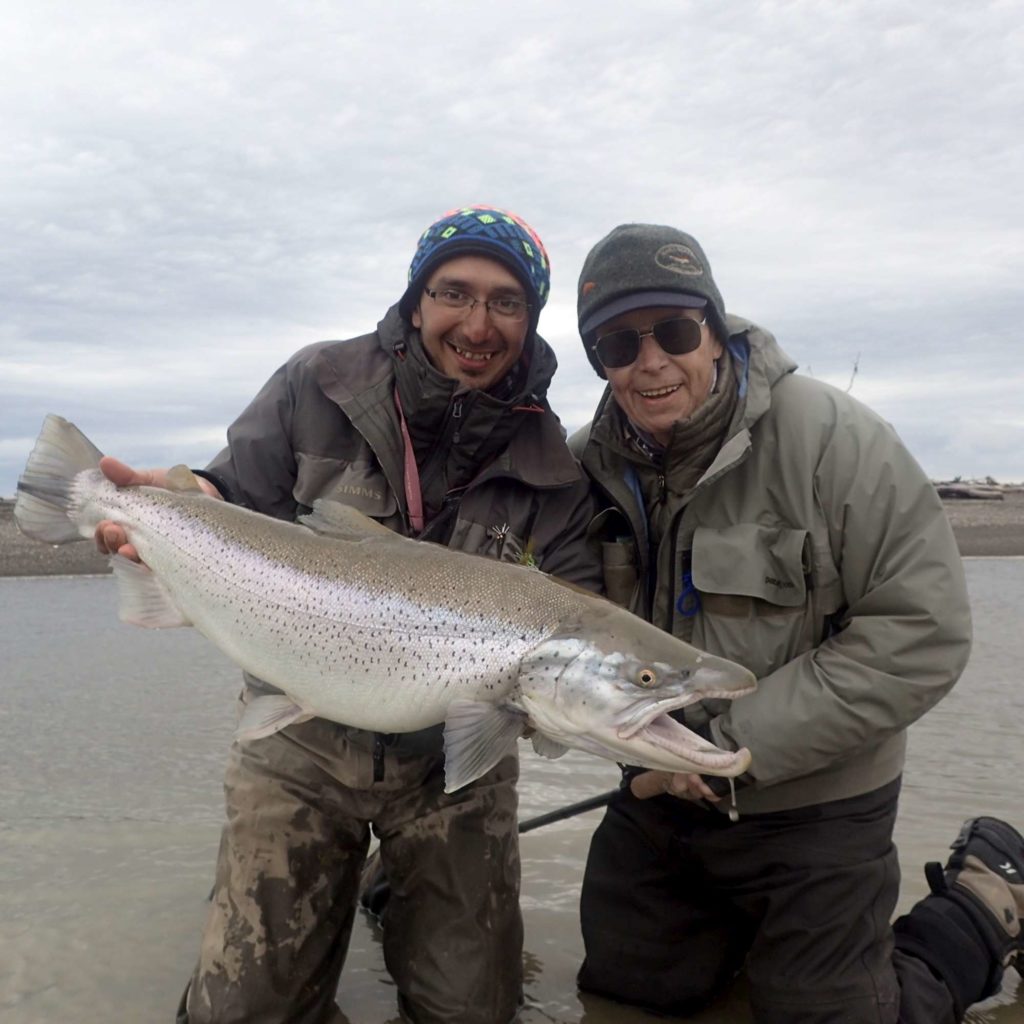 With low and clear water level, anglers and guides must do their best with each cast. The reward is waiting for a nice cast and a good drift! The river still dropping and most of the days were bright and sunny. With these conditions the Sea Pool is the best option looking for fresh fish, but also the chance of a robalo. Close to the ocean these sea trout have just been minutes or hours in freshwater, and they can take the fly in a very aggressive mode, fighting like crazy until the end. Taft, being guided by Diego, work hard and finally had a memorable catch in the Sea Pool, were he landed a massive sea trout. Murray, a very talent angler was the top rod, with 17 sea trout landed during his stay in WEL.

The beats close to the lodge are the most productive at this moment and during last week our guests landed some big sea trout, including one 16 pounds, two about 17 lbs, another 18 lbs and a 20 plus pound big male was the biggest one. 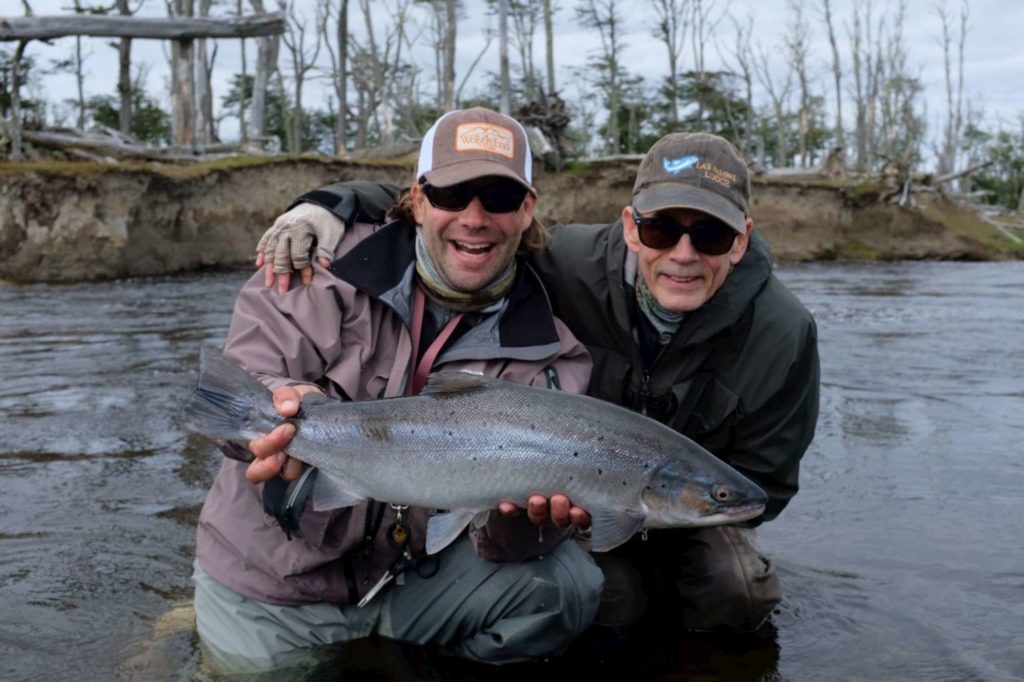 Because of the low level, most of the fishing is done with floating or Intermediate lines, and the best flies for this moment are Pepefly leeches, either Black with blue or with silver.

With high expectations for the weeks ahead, we continue chasing sea trout at the End of the World.

This week the has been very warm and dry with some showers, which were welcomed. The Irigoyen is still dropping since we start the season. It is very low and clear water, which has made the fishing challenging, pushing the anglers to do their best every day. We were glad to receive experienced sea trout anglers from the UK this week. They have visited Argentina before, but the Irigoyen was a new destination for them. 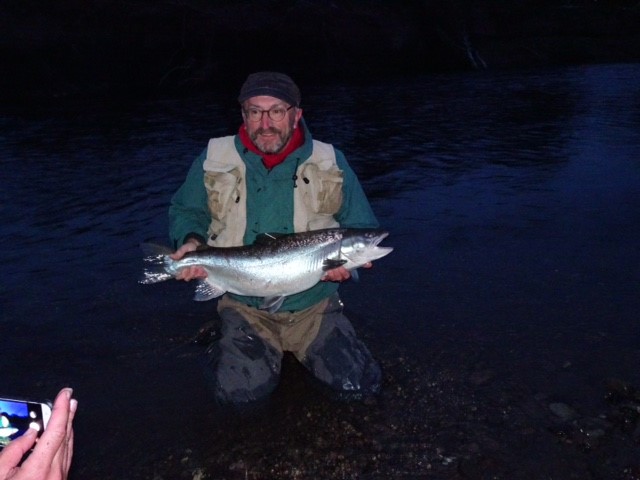 Long leaders on floating lines were the best option as well clear intermediate leaders. Rio Grande Queen black/blue and Black/silver leeches were the best flies catching almost all fish this week with just a couple caught on small nymph patterns.

Due to the low water conditions the fishing was very technical and very exciting with some epic fights close to the logjams. Indeed, some huge fish were hooked but lost this week – even snapping 25 lb leader material! 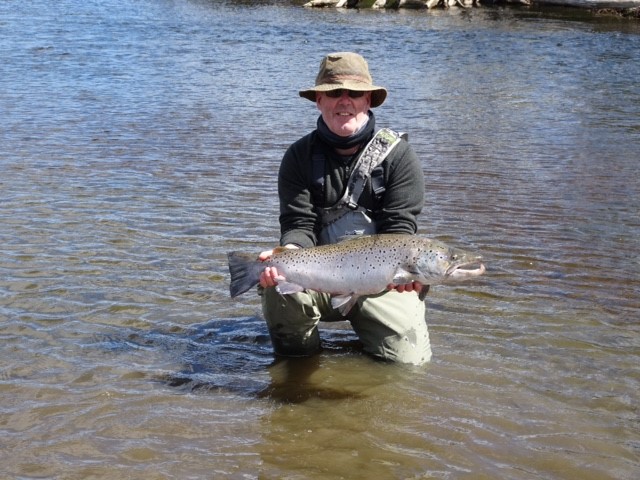 Tagging programme continues well with a further 23 sea trout from 3 to 16 pounds tagged this week, which were measured, tagged and released. We are very much looking forward to seeing the results of this experiment and hopefully recapturing these fish over consecutive seasons.

The first fish from beat 5 (the furthest beat from the lodge) has been caught this week in ‘Picture pool’, which is some 10 miles upstream from the sea pool. This gives us the insight that the sea trout are still running upstream even in low water conditions. 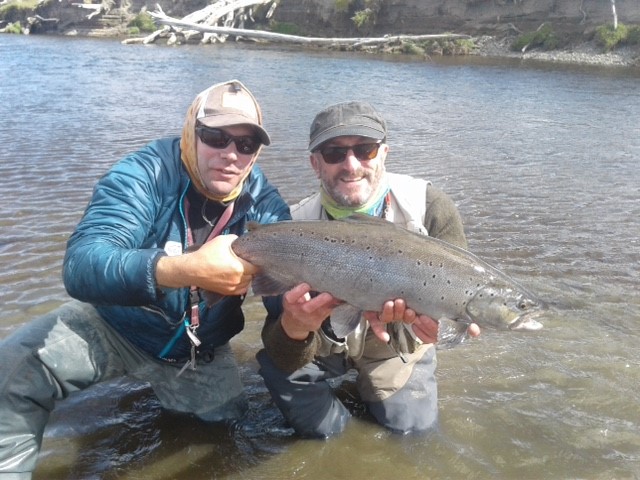 We have had a lot of fun and fantastic fishing week with Tim, Roger, Al and Neil, thanks a lot guys for your visit – you made our week very special. 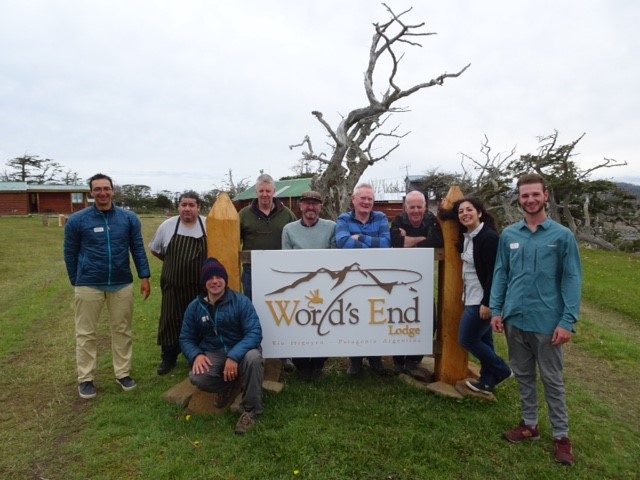 Ending the last fishing week of January,  the river continues to drop and is getting lower by the day. With these conditions, good presentations and lot of line control is required.

Most of the days were sunny and clear.

A lot of fish are holding and running in lower Irigoyen; beat 1 and 2 are working very well. Sea-pool is still one of the hot pools during the whole week, producing a magnificent specimen of 19 lbs and lots of fresh fish between 7 and 10 lbs. Also, home-pool gives some goods opportunities to the anglers with a fat female of 18 lbs landed. Best flies of the week were ones again RG Queen and some nymphs with bead head or lead eyes and clear (white or yellow) rubber legs as Wonderbugs.

Following the Tagging programme, 23 sea trout have been tagged during this week. 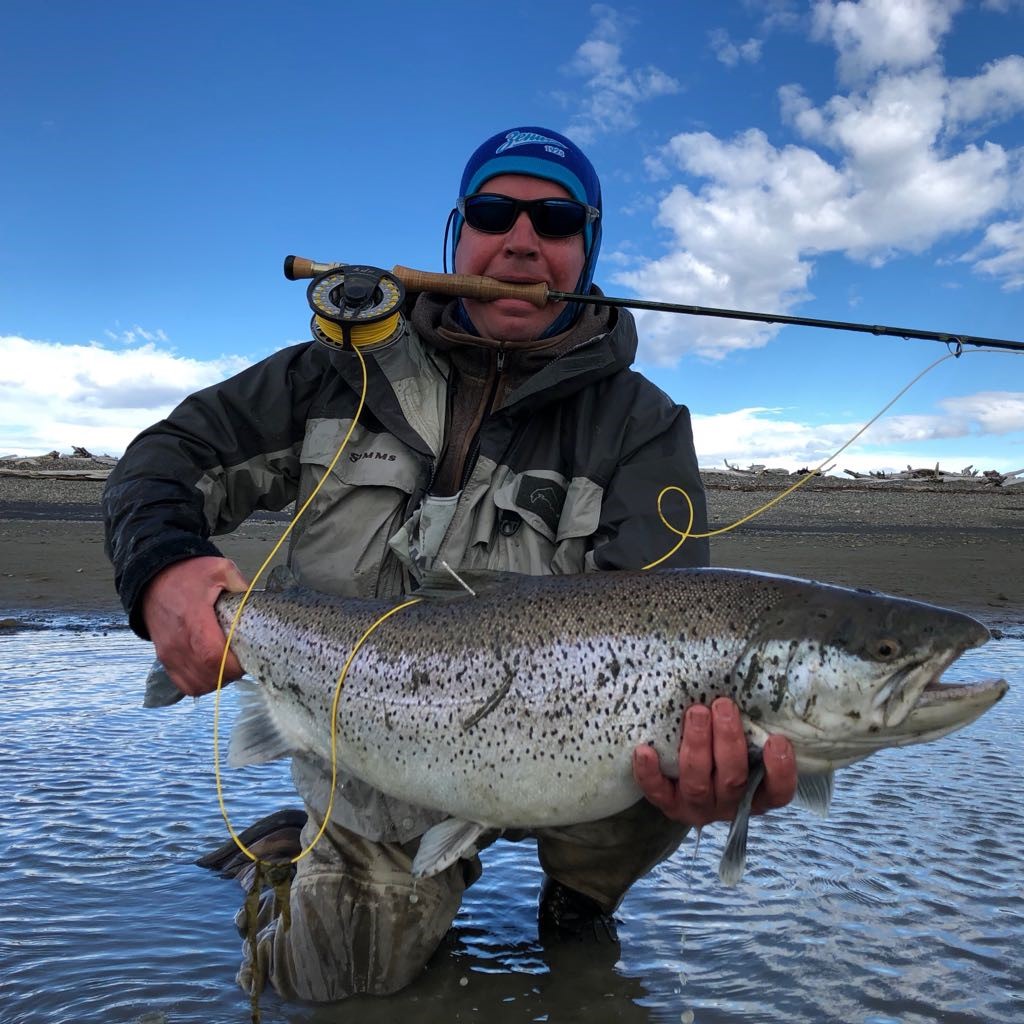 Our recent week finished with lower water than previous weeks and very sunny but windy days.

All sea trout that were landed were tagged, and whilst is was a difficult week the anglers thoroughly enjoyed their stay. Even with very good and experienced anglers the low water conditions pushed them to do their best every session to get some takes. 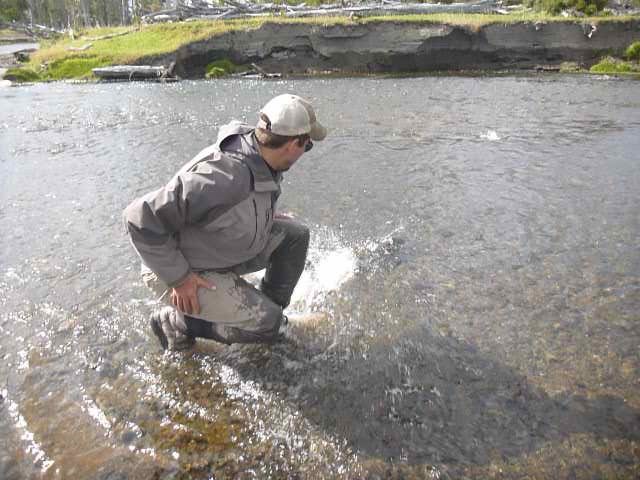 They had a lot of touches and soft takes that would not convert into hookups. Most of the fish were caught during evening sessions as the light began to fade and we found the sea trout willingly to take the fly with more conviction. On the first two days of fishing our British anglers Mark and Simon landed the biggest fish of the week, a beautiful 14 lber and several others between 8-12 lbs.

Again the best flies were big leeches in the evening and small nymphs during day time.

So even with low water conditions we still having fun at the end of the world.

Our most recent week saw very changeable weather conditions, from calm sunny days to thick cloud and rain. The rain was not persistent enough to affect the river but it did offer some fantastic fishing in the evening sessions. 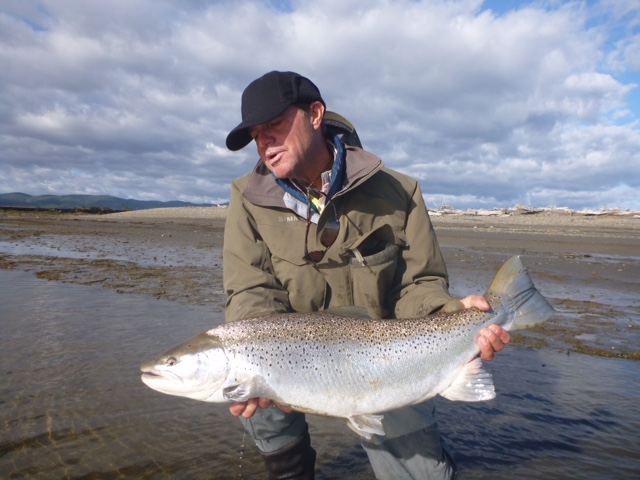 The two rods at the lodge this week were able to focus on some of our favourite pools for the duration of their stay, making the most of their time.

This week, floating lines and long leaders continued to prove the most successful way to target the sea trout, with several nice fish between 6 and 16 lbs landed. Castor and Home pools were the most productive of the week, both situated on the lower section of the river.

During the day time most of the fish came to Wonder Bugs, in the evenings the Rio Grande Queen proved to be a firm favourite for fisherman and fish.

All fish caught were once again tagged and released.

Make a booking? Need more information?
We are proud to announce that we have worldwide exclusivity at World End Lodge on the Irigoyen. If you would like more details such as an information sheet, example itinerary or to check and confirm availability please do not hesitate to contact Steffan Jones or call our office on +44(0)1980 847 389.