Sea Trout fishing on the Test

The other night I was lucky enough to be invited to fish the Testwood Pool on the lower Test for sea trout by Alistair Robjent of Robjents Tackle in Stockbridge. For those of you who, like me, were unaware of the migratory fishing on the Test, our most famous chalkstream actually has an increasingly larger run of salmon and sea trout every year. Alistair has been fishing the lower Test for sea trout and salmon for approximately 10 years now and knows the beat intimately, so I felt really privileged to be asked.

This is typical night time fishing which I have always found extremely exciting, and requires co ordination and stealth…. so no doubt I was going to find this quite challenging! I have also not done any slithering around in the dark since my days as a guide in Norway many years ago. There I would often spend the early hours wandering around the river blank hitting the spots I knew held these timid fish. Normally when participating in sea trout fishing of this nature one would turn up at mid day or so and scout out the river and the lies so that you would have a much better idea of the topography of the river bed, and where the likely taking spots would be. It is also your opportunity to figure out where you can cast and where you can’t. 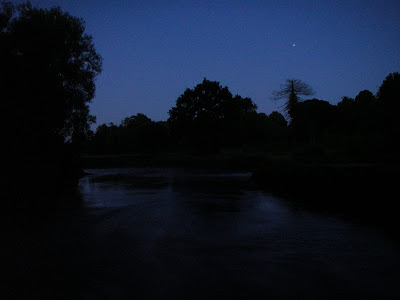 I would also recommend using tackle that you are very familiar with as everything becomes much more complicated in the dark. Well, that was not to be the case here, and we arrived on the river at about 2230… in the dark. Nothing like a challenge! So, night time drills applied here as sea trout will spook easily, even at night. It is important to keep well back from the bank, and if a torch must be used to change fly then make sure that you hold it in your mouth and point away from the river. You will have to forgive the photography as trying to take pictures in the pitch black is challenging!

For this little excursion I was using a 9’8″ 7# Loomis matched with a mastery stillwater clear intermediate line on and old Hardy Ultralite Disc, 15 lbs flourocarbon and the weapon of choice down here is a snake fly of Alistair’s own concoction. The extra length of rod is useful with the sharp banks and mending the line over undergrowth. The fly is tied on a single size 6 with a long silver mylar body that extends well past the shank of the hook and terminates in a wicked little flying treble. The wing is long and black extending right past the treble, and there is a small orange hackle tied in at the throat.

Alistair and Kirsty showed me the lie of the land and while Kirsty moved further down to one of her favourite spots Alistair kindly ghillied for me and directed me towards a nice little run known as “Lower Pipes”. It was a bit if tricky back cast up against the trees, and as I was suing a clear line as well it was pretty tricky to gauge the distance. Eventually I found by using the thickness of the belly I could distinguish roughly how far I was casting under the trees on the following bank. The fly swung round in a fast arc and suddenly, bang! The fish hit the fly like a small jet propelled rocket, and immediately turned and made off down stream with the tip of the rod bucking wildly against the drag. I think to begin with I probably to much pressure on him and brought him up the fish up the surface. We could see the silver flank flashing in the moonlight and I found the sleep that had been trying to invade my eyelids was very quickly beaten back by a rush of adrenalin. After a reprimand from Alistair I back off the pressure a little, and after a couple of admonishing comments such as “you saltwater oik, stop hammering the fish or the fly will pull out” the fish swam freely at its own pace. 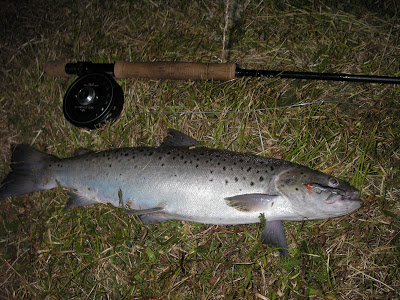 This was the fun part, for at Testwood there is a very steep dropping bank down to the water, and it was necessary to lead the flashing fish up the river a little to Alistair’s waiting net. It is important not to get over excited at this point as a quick swipe with the net is very likely to know the fish off, especially with that fly treble that can easily get stuck in the net and create leverage for the fish to pull free. Luckily for me my expert ghillie waited patiently as I guided the little bar of silver over the waiting net and Alistair drew him up and away from the river. Ha Ha! My first English sea trout! An extremely good way to begin the evening. It was a lovely fish of 3 1/2 lbs, and gave me a good scrap.

It was now pitch black, and as we fished on in the darkness I could here the odd splash of a fish out there that only made the blood pulse that bit more, every cast waiting for the tug in the hand. Every so often the silence was punctuated by the screech of a hunting barn owl, or the whir of bats wings over head. Unfortunately for us that night there was a quantity of weed coming down the river which often resulted in the proverbial “weed fish” excitement, but turned out to be a disappointment. Kirtsy hooked a nice fish between 0100 and 0200, but sadly they parted company in the night. At this point the temperature did a nose dive and the activity dropped off… and so was I. I put aside my rod and followed Alistair down the bank to a favourite lie of his just above the road bridge. Fishing finished at 0300, so it was time of a last ditch effort. Alistair had explained that this stretch had a lovely shallow on the far side that sloped into a trough under the near bank covered by an overhanging tree. I cast down stream and a 60 degree angle allowing the fly to fish immediately and we both held our breath as the fly came round into the trough. 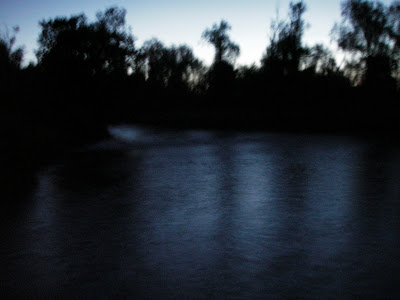 Sure enough, a fish hit the fly and wrenched line out of his hand immediately before trying to run downstream under the bridge. At the last minute Alistair calmly walked up the bank and the fish followed away from the obstacle, and again I caught that flash of liquid silver in the dark as it rolled. After a few more runs the fish rolled over and I was able to gently slide the net under and bring it to sure. A beautiful 5 lber, still with lice on its flank. There is something truly magical about being out on a river at night. The sounds and smells all around are something that we rarely experience tucked up in bed, and would encourage you to try it. As we turned and headed for the hut the soft glow of dawn could be seen sneaking up through the trees. Time to head home and grab a few hours shut eye.