Seychelles; Cosmoledo, the finest GT fishing on the planet?

Cosmoledo atoll in the Seychelles still remains the world’s hotspot for numbers of giant trevally. It is not so much of a fishing trip but more of an adventure with a fly rod. The atoll is remote to say the least, reached by 3 hour flight from Mahé to Assumption, and then a 10 hour overnight sail to this hallowed ground. Its remoteness ensures the fish has been extremely consistent and packs of marauding GTs can still be found charging across the wide open sand flats of the lagoon or terrorising baitfish against the shores of one of her eleven islands. When I think of Cosmoledo there is an event that shall remain ever burnt into my mind that for me sums up the atmosphere of this extraordinary atoll. 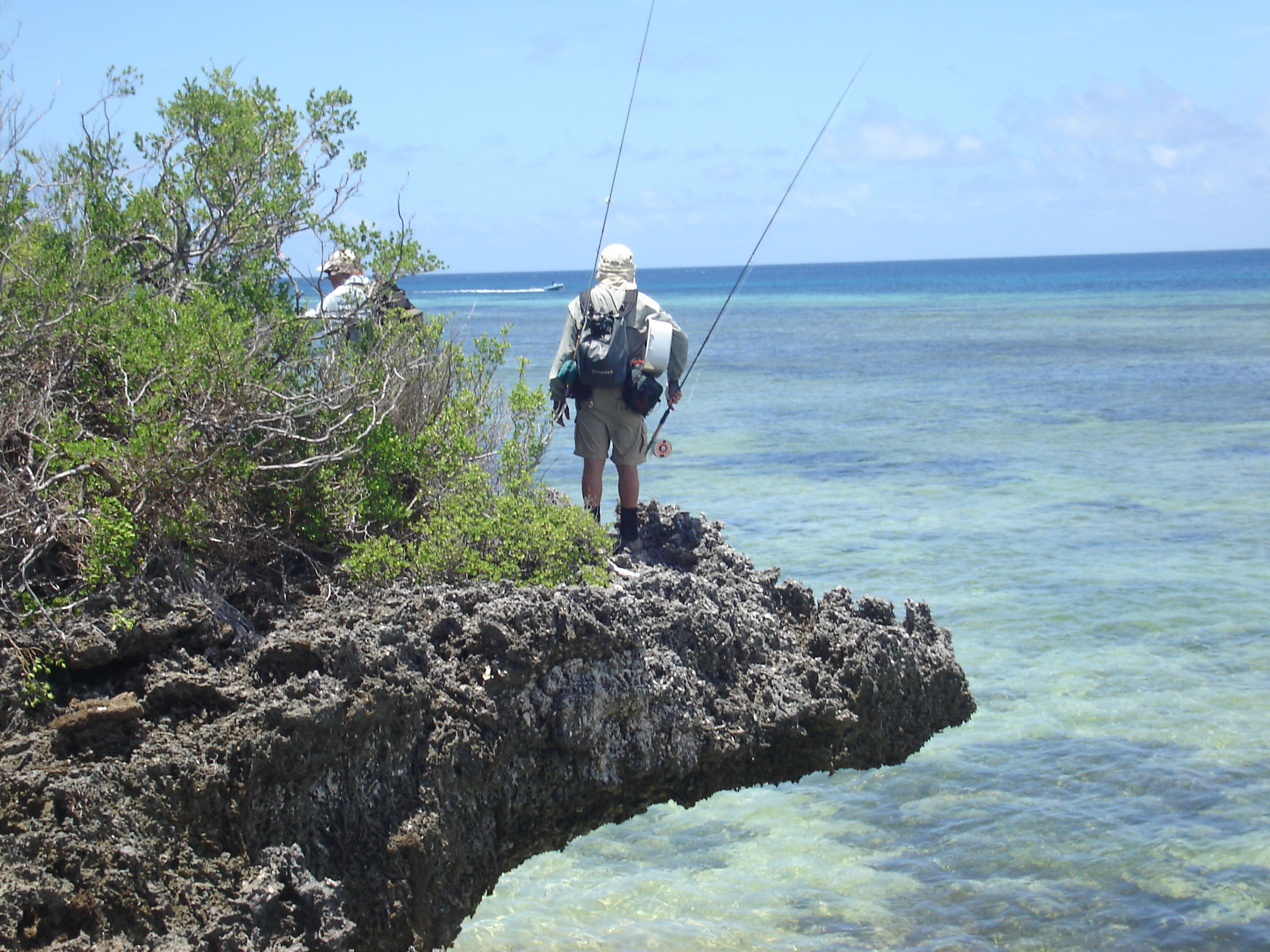 To set the scene the tide at Cosmoledo pushes incredibly fast as the tidal fluctuation is some eight feet. You need to have your wits about you in case you get stranded by racing water. This is easy to do when you are catching fish and not concentrating on your surroundings. This fast moving tide also produces some of the finest trevally fishing environment in existence. You will often cover great distances on foot during the day over the flats, and sometime over treacherous coral on the islands. The overhanging coral cliffs are a fantastic hunting ground, and on the huge open flats it is possible to wade and sight fish to individuals. Some of the finest fishing I have encountered. This strong tide also produces “rivers” that flow between islands, and strong currents around their edges. 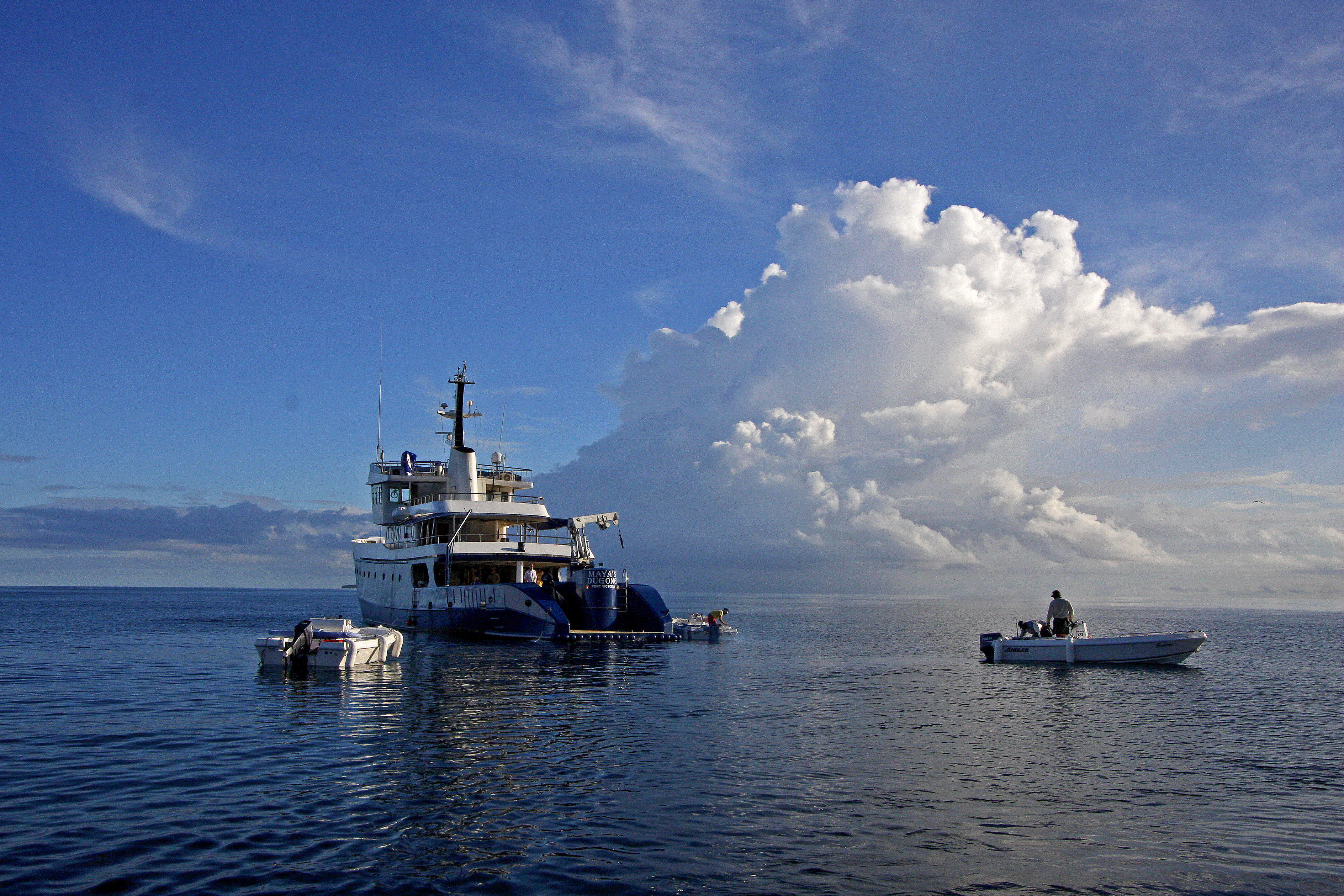 In these conditions on a dropping tide my brother and I experienced this first hand. We arrived on the lee of one of the islands with the sun beating down on our backs not long after midday. As the sun was high, it lit up the surrounding water allowing us to see everything. We crouched on a coral overhang approximately 12 feet above the water as the “river” raced along below us. Keith immediately spotted a fish, clearly outlined hanging in the current and darting to and fro like a feeding trout. The only difference being it was 25 lbs! I ducked, and Alex made the cast. The fly landed, immediately moving in an arc across the current, and the fish with one powerful thrust of its tail rose in the water column, engulfed the fly and returned. Alex struck and the battle was on… the visual experience was fascinating, and as the fish began stripping line of his reel against the flow, Keith touched my arm and pointed further down in the flow. 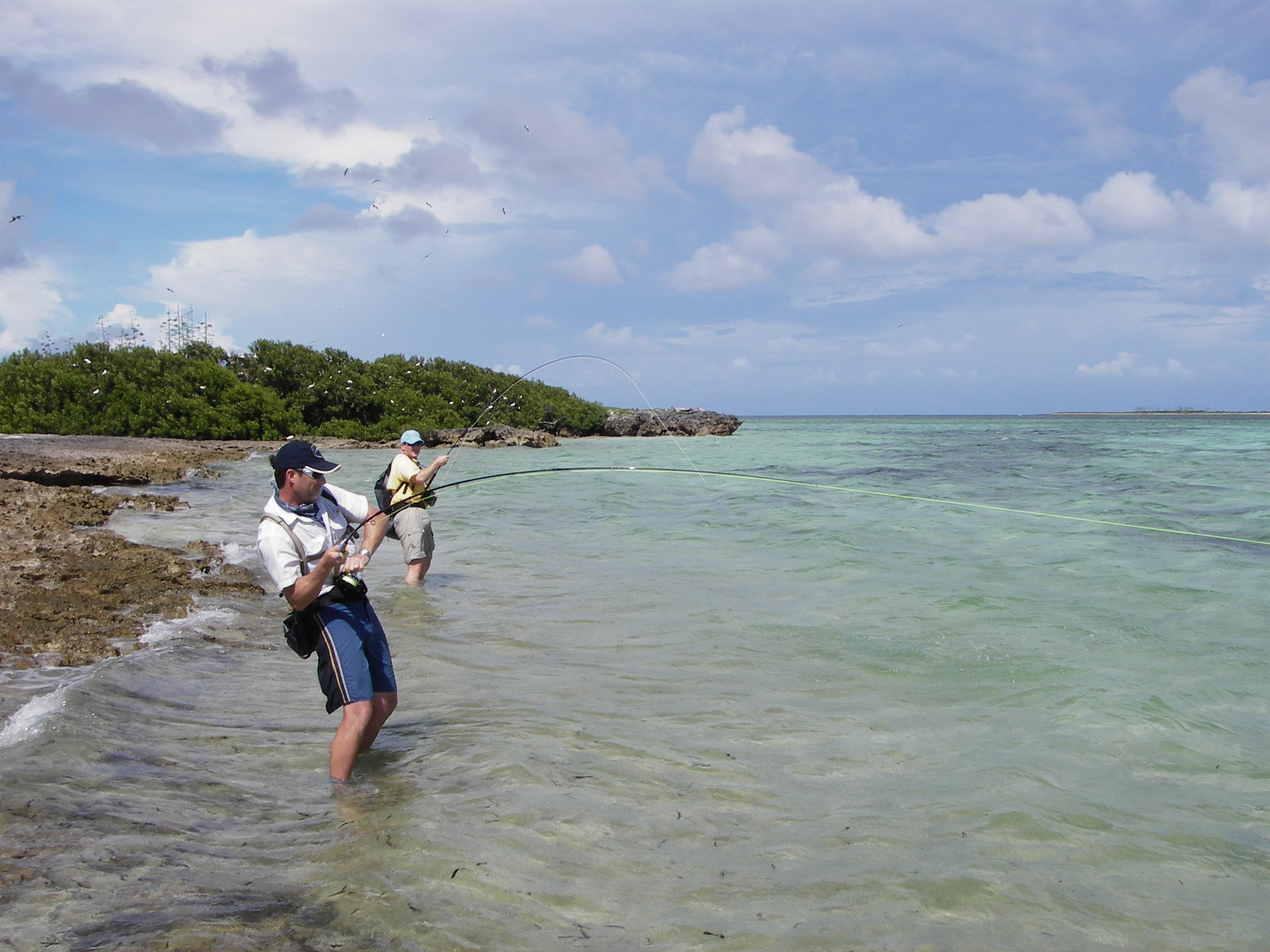 There lay another, a female, her translucent grey colouring almost making her invisible. Alex moved to the left and I cast a tight loop across the flow. The fish rushed the fly with the speed of a charging rhino, and as the fly bedded I was nearly yanked over the edge. So here we were, two grinning idiots attached to bedlam standing 12 feet above the water. The climb up had been tricky enough, and the concept of climbing down attached to two large trevally was not an option.
“We are going to have to jump” said Keith in a matter of fact tone. It took a little while for this sage advice to penetrate my senses. 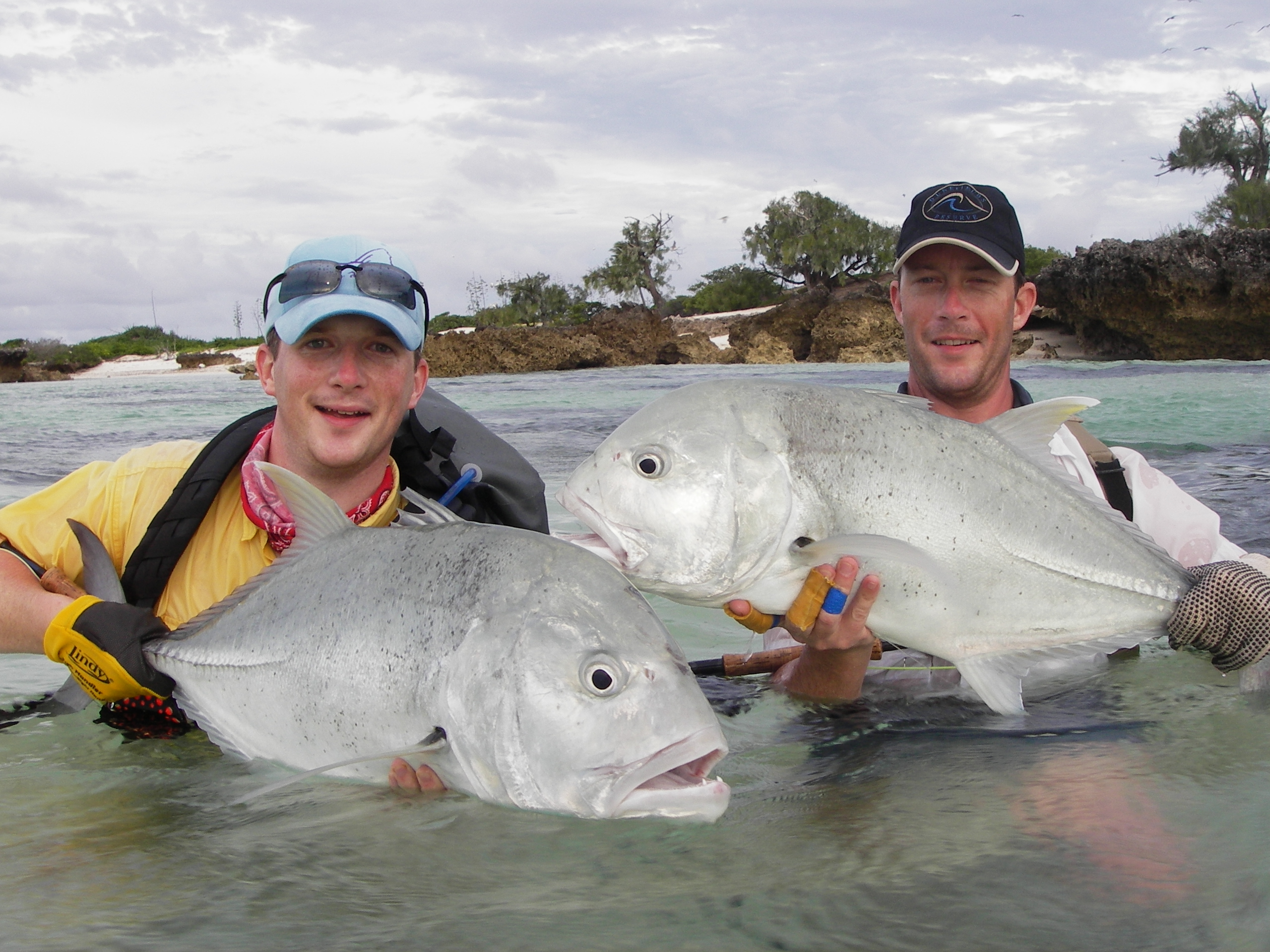 “You are joking…..aren’t you?” I said. He gave me that look, and I knew he was deadly serious. Thus I learnt about a crucial part of fishing at Cosmoledo. Cliff jumping. Keith then disappeared over the edge with a holler and landed in the water below, beckoning us to follow. All this while we had been frantically trying to gain line on these fish and were sweating profusely. A swim sounded good. As if my opponent heard me she turned and started heading for a coral outcrop that would almost certainly end this fight with the need for a new line. This was extreme fishing, and after taking two more turns on the reel to take in the slack I leapt off the cliff still attached to my fish and landed in the water below. It came up to my neck and I quickly headed to the sand shallows from where the battle could resume. A shout and splash later, and my brother was standing next to me. I put on my glove, and managed to triumphantly grab the tail of my fish, and then the two of us looked at each other holding our prizes. Did that just happen? Keith just laughed, welcomed us to Cosmoledo and took a few snaps before we released them. 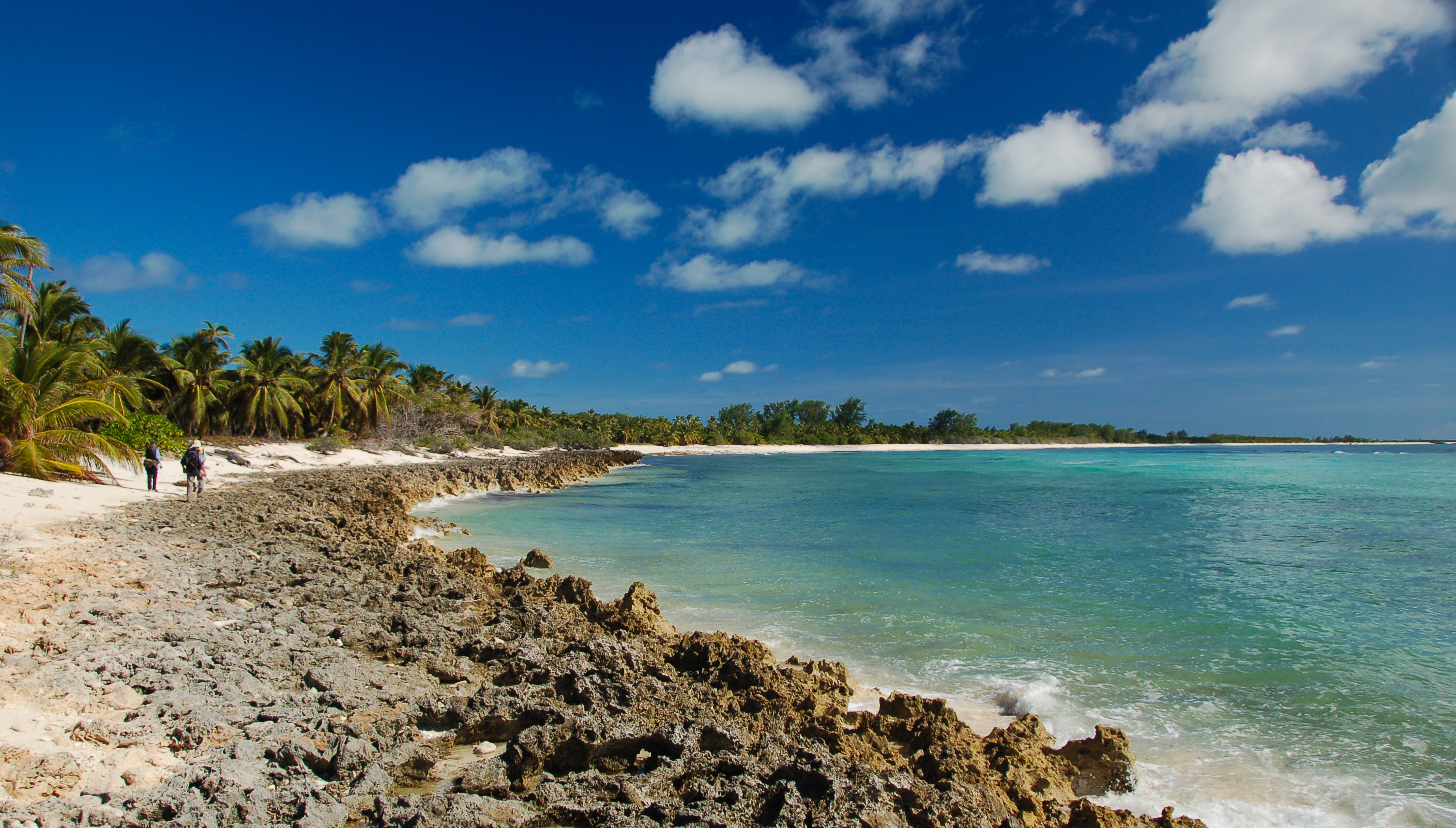 Cosmoledo has a short and exclusive season and we can offer the following availability for March and April 2016:

The cost is US$14,950 per person based on shared cabin and shared guide and boat.

For more details on fishing in the Seychelles or any other saltwater destination please do not hesitate to contact Peter McLeod or call our office on +44(0)1980 847389.