Although normally thought of as a GT hotspot Farquhar remains for me one of the Indian Oceans top mixed fisheries. Yes, there are some of the largest GT’s I have ever seen swimming around its rocky promontories but the trigger fishing on the Paris to Dakar flat on the north end of the runway and down Trigger Happy have to be seen to be believed. I supposed what I am trying to get at is that many heading to these destinations become so fixated with GTs (myself included) is that we often overlook so many of the other fascinating species that congregate on the flats. There is one that will have me heading back there in a heartbeat, the saltwater bison of the flats, pumphead parrotfish. To give you an idea have a quick look at the film below called “The Aqua Hulk”.

Quite possibly the oddest fish I have ever landed on a fly, “Bumpies” as they are affectionately known are one of the species that make Farquhar really quite unique. There are large populations on Farquhar that can be found grazing across the large turtle grass flats of Green Mile and on the coral gardens down by the wreck all the way down to the bottom of Depose. Of all the atolls I have visited I have never seen such high concentrations or the perfect environment to hook one. Notice I say hook one, as even though that task is not hugely difficult, hanging onto one is tricky. I think you are looking at similar figures to jumping and landing tarpon. 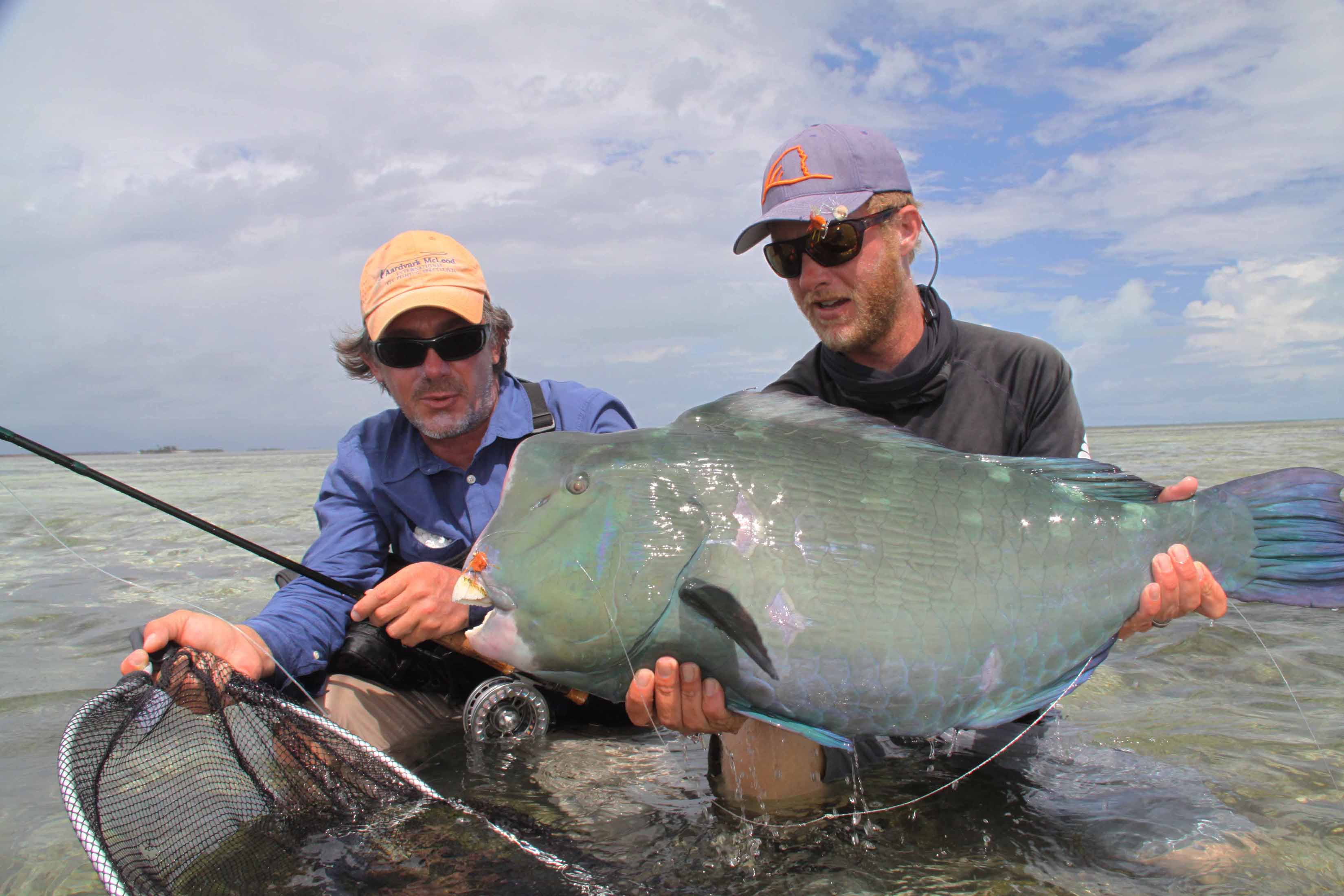 The issue is the giant pair of coral chomping bolt croppers attached to their face. The hook needs to penetrate the soft corner of the mouth or they simply bite through the hook. Bumpies moved up tide, and on turtle grass the best way to catch them is to put a crab pattern out in front of the school and allow them to move over it. Then it became more like Czech nymphing, watching the leader tip and seeing if it begins to move away. Bumpies are very odd looking fish, and they actually lean over to inspect the fly before chowing it with their beak. 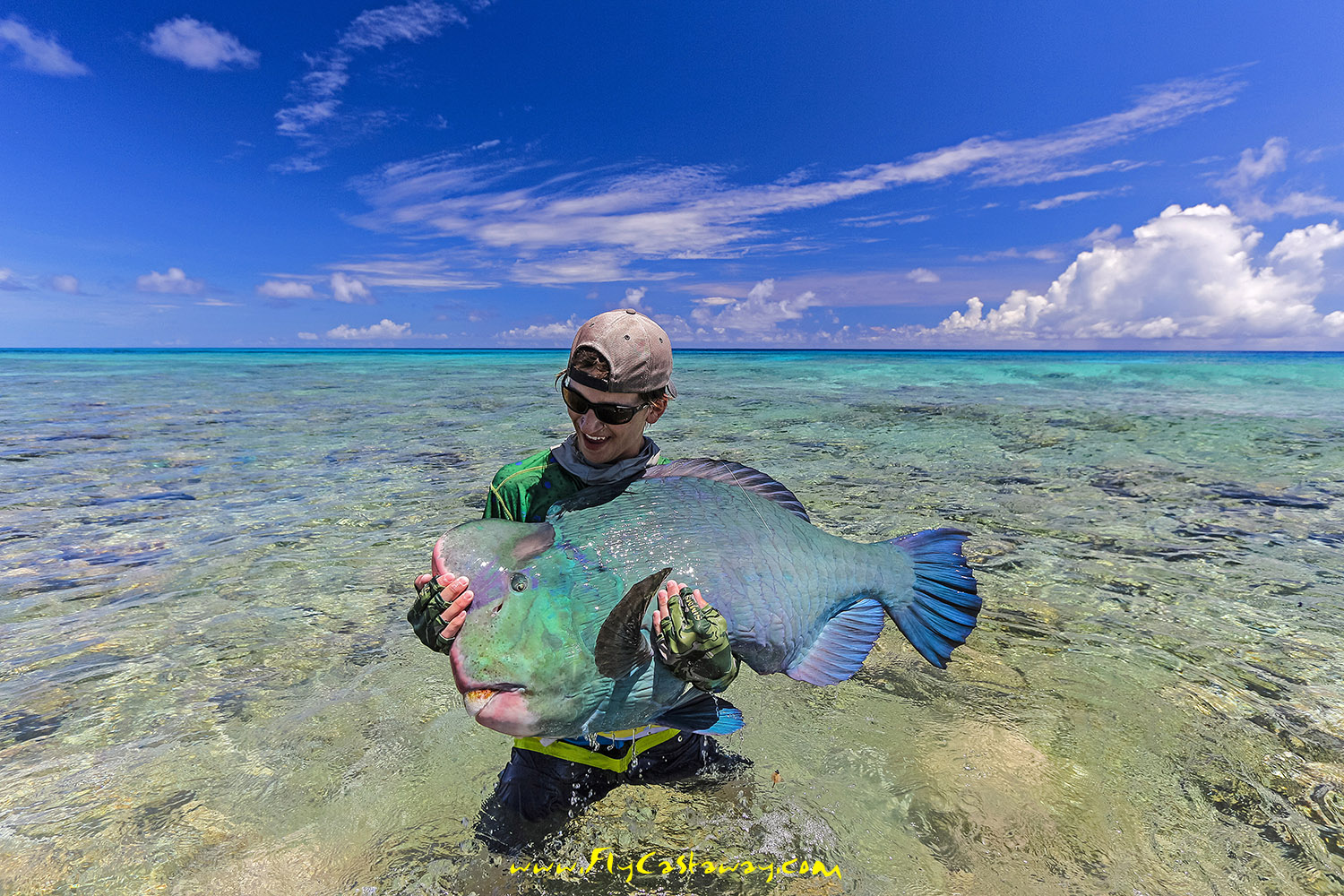 I remember the last one I caught like it was yesterday. We had spent some time drifting in between “2nd island” and “3rd Island” and saw a couple of fish, but no shots. Our guide putted us back up to “2nd Island” and we hopped out to find a pack of bumpies tailing near the edge. While my fishing companion and the guide slunk around the corner so that he could get the optimum shot across the wind I decided to go for it and started slinging out some back hand casts on the 9 weight. The crab sank down into the pack, I saw a bumpie roll over to inspect the fly and then everything went tight.

The fish charged off with the rest of the pack like an enraged bison following the pack and I hung on for dear life. The first task when hooking a bumpie is to separate him from the pack, so I began to apply some serious side strain and to use my legs to pump and wind, all the while knocking the fish off balance by pulling his head down in the opposite direction. Either the hook would pull or he would cut me on the edge, so there was no point in pussy footing around. Rather than chase after him down the flat I decided to dig in and fight him with everything I had. 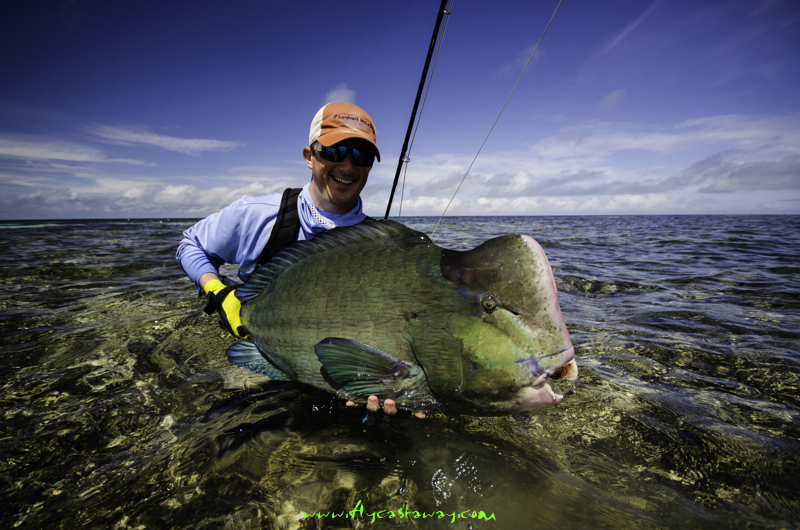 Finally the pack made its way off into deeper water and the fish calmed down a bit. My guide was already heading towards him going for the long landing tactic. Without a net, the only way to grab a bumpie is to try and slip a fabric band into its mouth and wedge it in the gums away from the beak. After chasing it back and forwards while the constant pressure I was applying began to pay off Kyle finally managed to gag it and jump on the fish.. landed! I was exhausted but exhilarated. Leader, knots and fly had remained intact, and it was a stunner of about 40 lbs. They are still one of the weirdest fish you will encounter on the flats, but also one of the largest fish you will ever see tailing in shallow water.

If tangling with these exotic fish appeals to you then why not join Charlotte in 21 – 28 April 2017 as she has only a couple of spots left. What is immensely attractive about this current season is that Farquhar is only going to be fished for eight weeks in the whole 16/17 season. Please contact Charlotte Chilcott or Peter McLeod. Alternatively call our office on +44(0)1980 847389.