As the Farquhar season kicked off we have been really excited about welcoming our clients to the new lodge this season. Having watched it develop on our various trips down there during the course of the year we are delighted with the result. 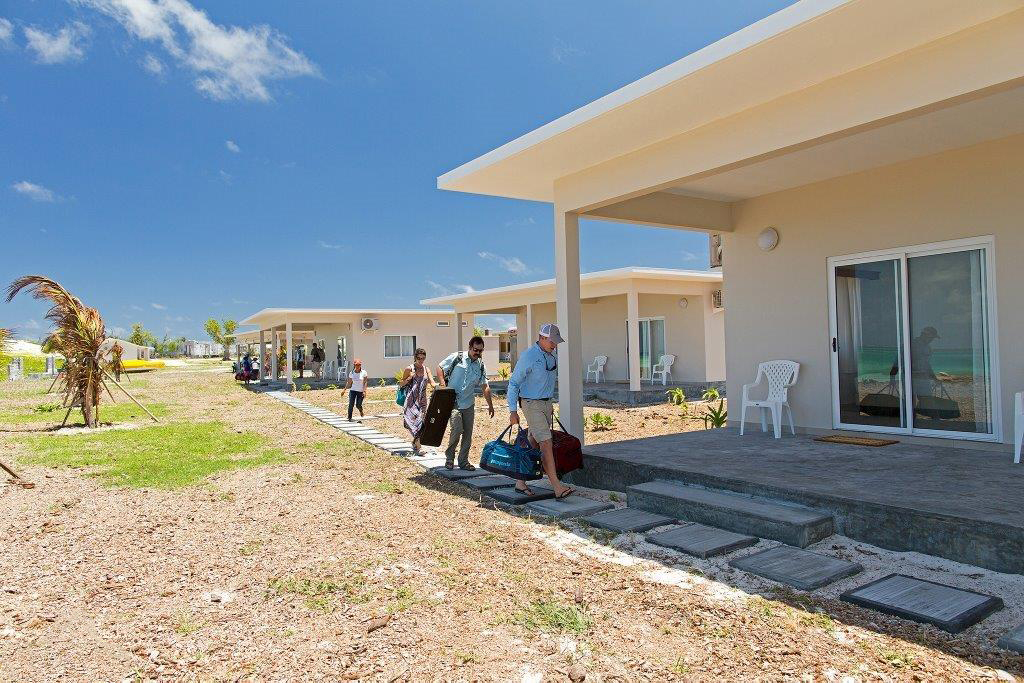 Farquhar had always been slightly hamstrung for some clients by the quality of the accommodation at the old guest house which was charming, but basic. The new lodge offers modern comfort in duplex bungalows, larger ensuite bathrooms and even an outside shower behind each room and is a game changer. 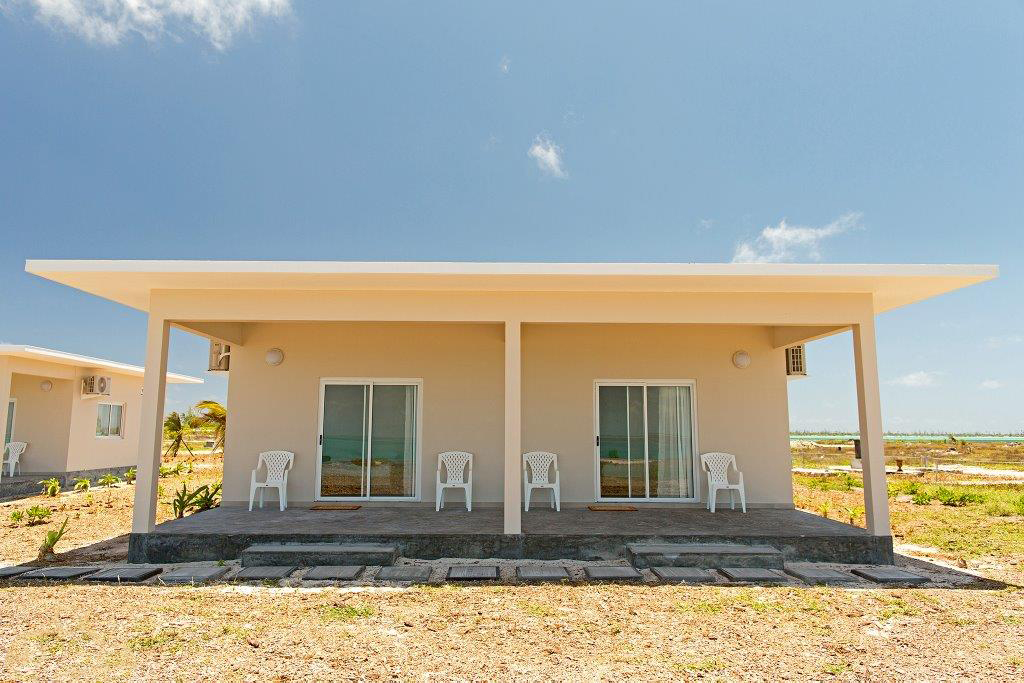 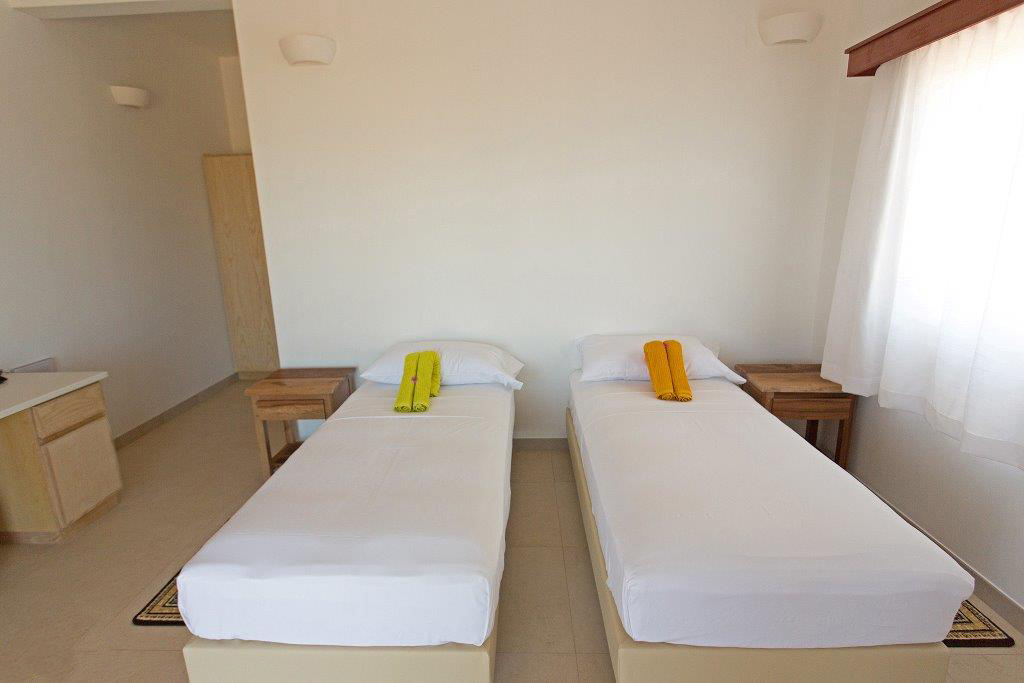 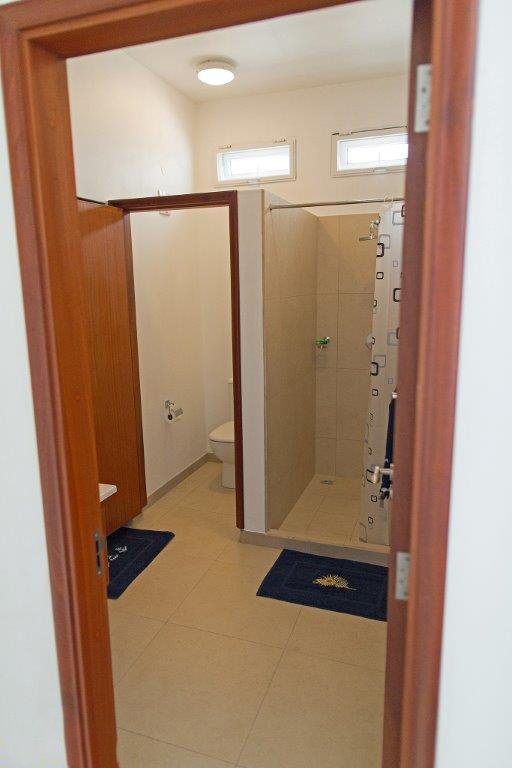 The old guest house building has been completely transformed into wonderful social area equipped with air conditioned sitting room, outside bar with roll down wind breaks – the perfect place to unwind after a long day on the flats and discuss the events that have transpired. 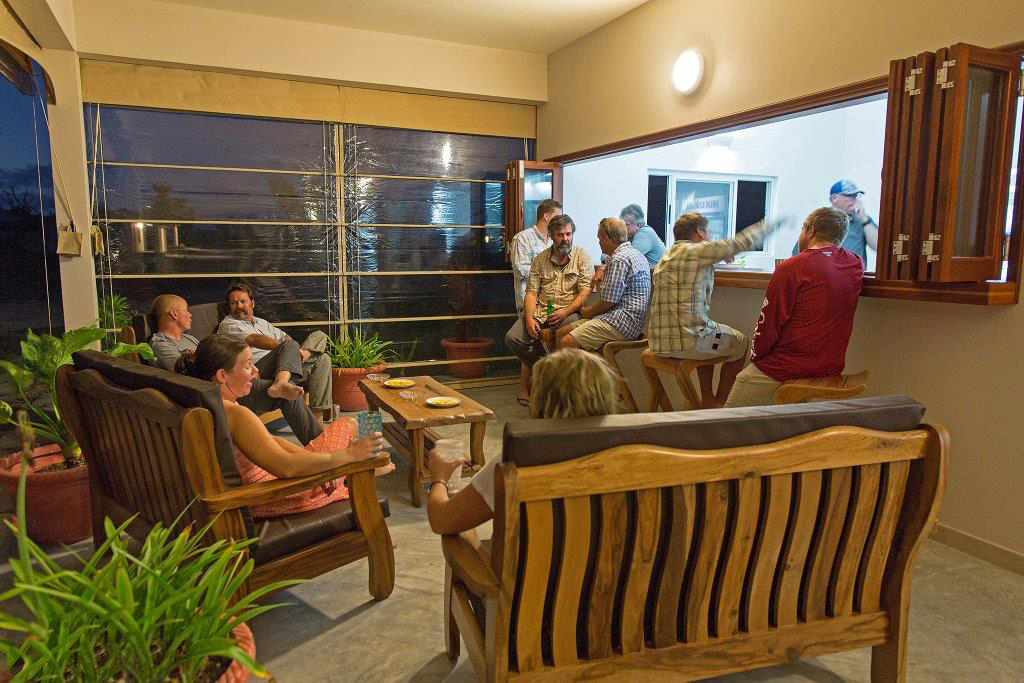 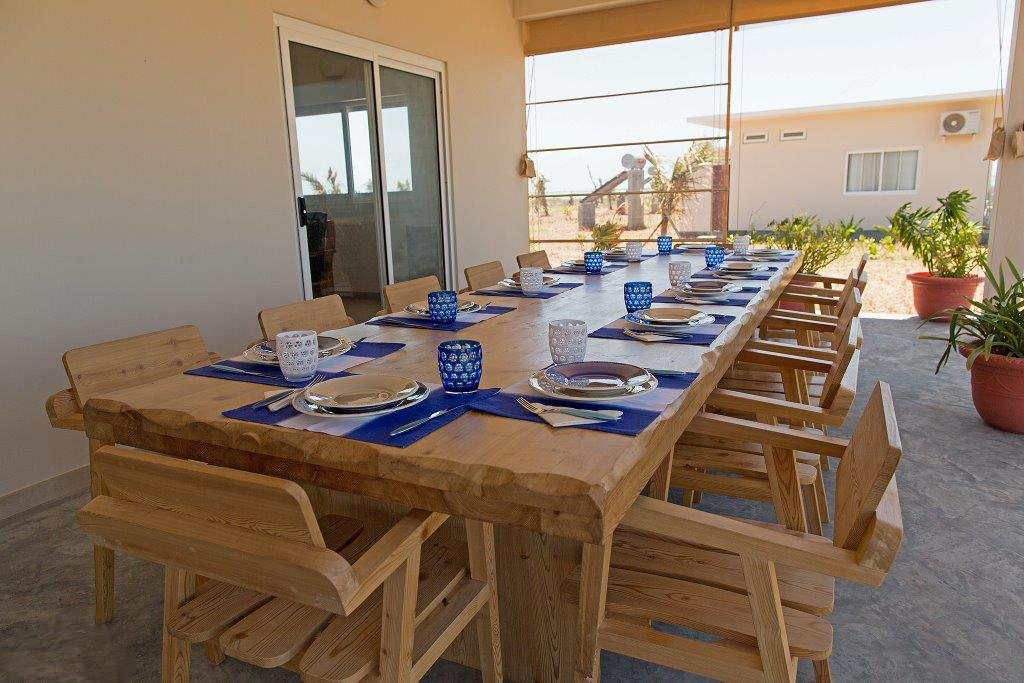 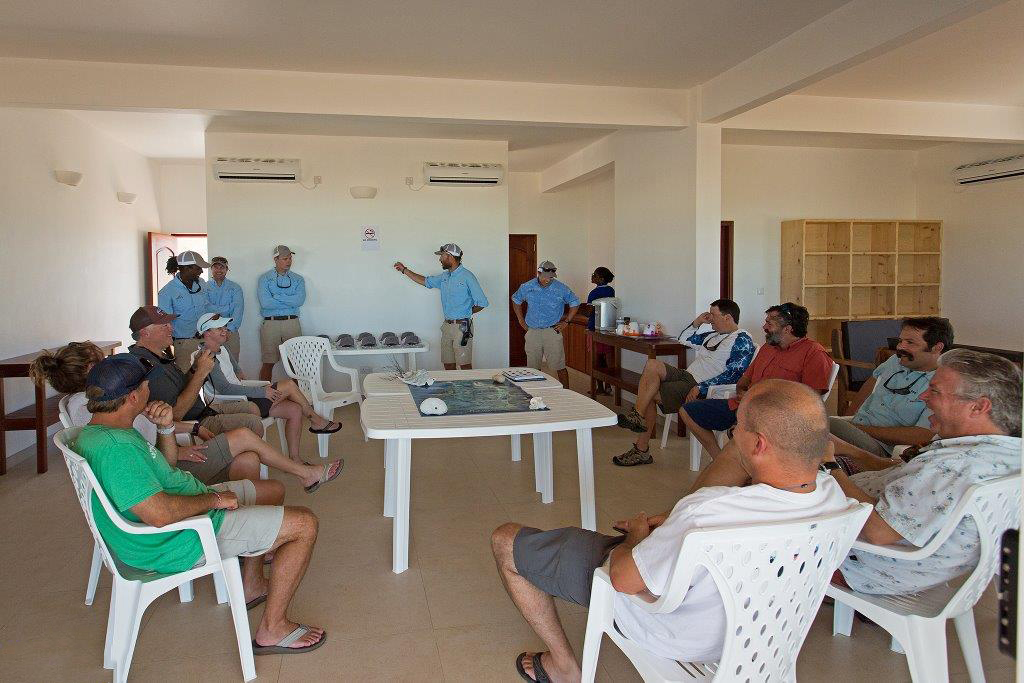 Although some of the more homely trimmings such as pictures and soft furnishings are still to be added the ambience of Farquhar remains unchanged. 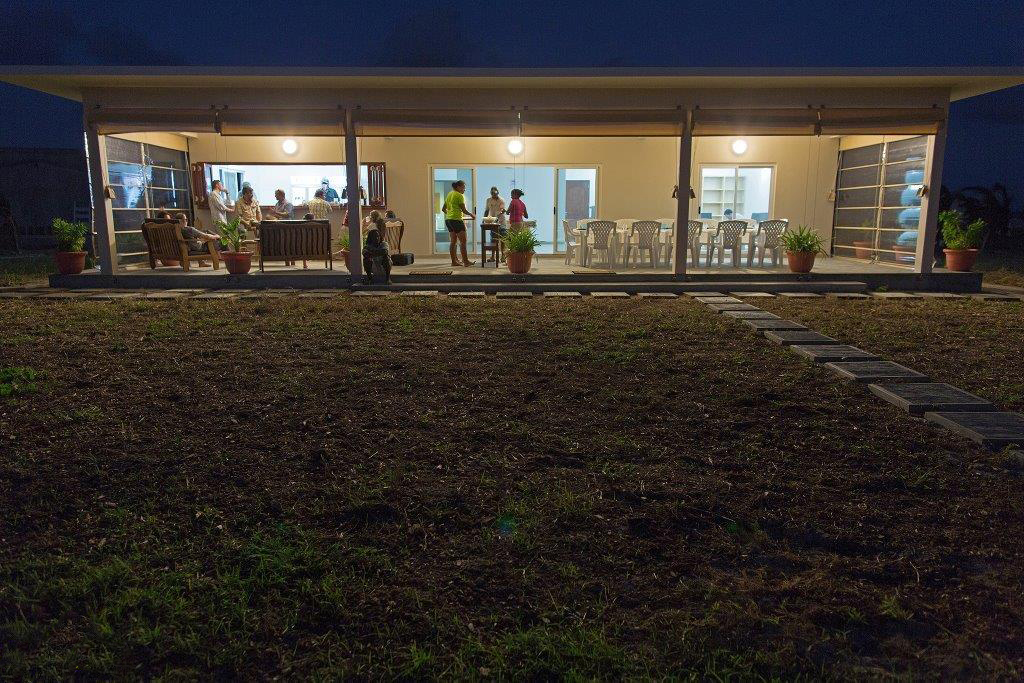 The first week on Farquhar saw a large amount of GTs in residence but 4 days of tough visibility made fishing tough. The first week 18 – 25 October 2017 report is below:

It’s with a great sense of excitement that we write this report from Farquhar Atoll. After nearly 18 months of clearing and rebuilding, the new lodge is now officially up and running and it looks terrific! The new layout offers more privacy for our guests when they want it and the large social dining and bar area is sure to impress all future guests, including those wanting to kick back whilst enjoying a cocktail and a chat about that great day out on the water. 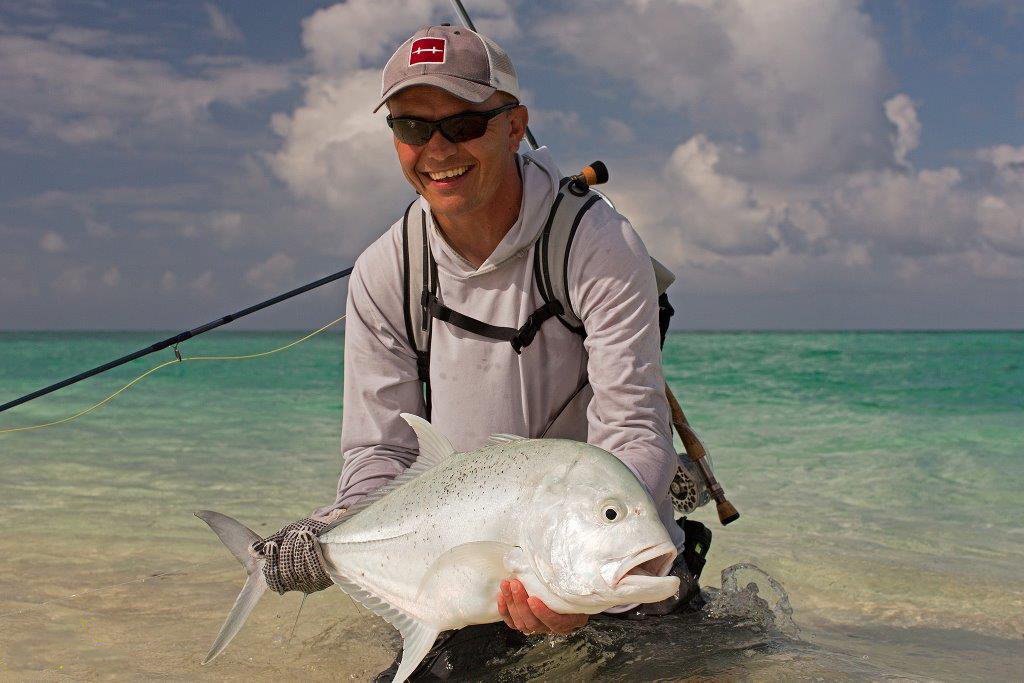 It really is so good to be home! Joining us on this momentous week were Rich, Millie and Jon from the Trouthunter along with a group of great friends. Despite some of them having fished St Brandon’s with us, this was to their first trip to Farquhar and they were clearly excited to get stuck into some world class flats fishing and enjoy their own private atoll for a week! 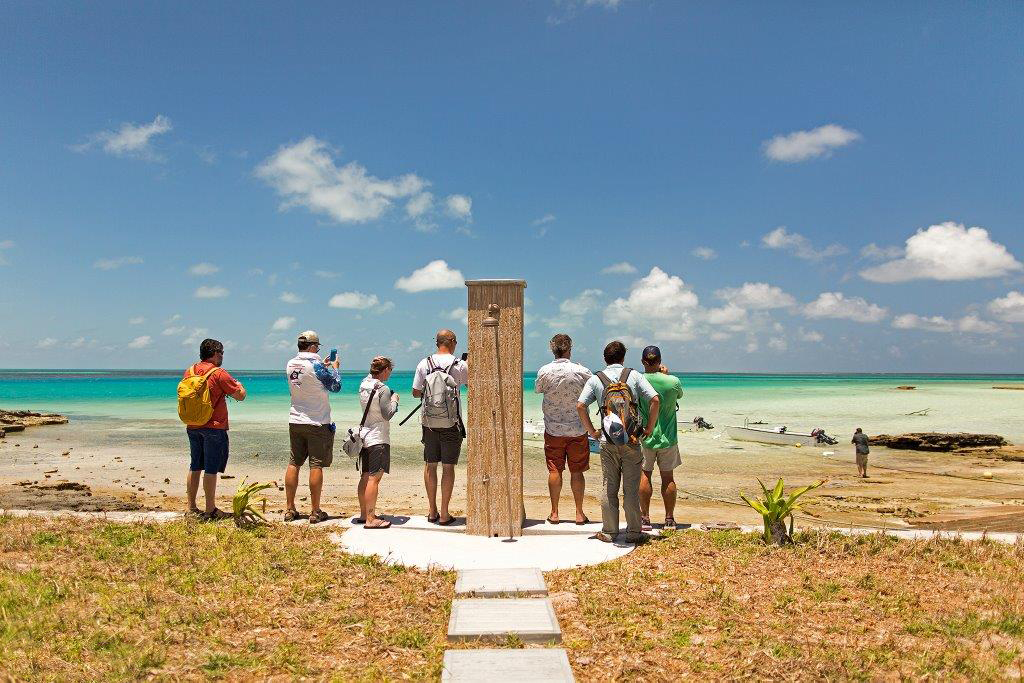 Day one had a strong south easterly wind blowing over the flats which kept the water cool and the fish hungry. Solid numbers of GTs were sighted across the atoll and despite it being the first GT fishing for many of our guests we managed to land a few, John and Ben both landing their firsts. One of the fish proved to be the fish we all dream about! A large fish was spotted cruising away over a white sand flat in the south, and after a few attempts the fish turned towards Robert. Robert made another cast and after two strips the fish tracked and inhaled the fly. It instantly bolted off for deeper water but after an incredibly powerful battle the glorious specimen came to hand. She was all of 120cm and a cracking way to start the week and our season! Congrats Robert! The Bones were around in good numbers on the eastern side of the atoll and provided good sport, whilst the Triggers too offered up some opportunities, it was just our friends the Bumpheads which were a bit scarce, the big tides no doubt keeping them off the shallower flats. All in all a great way to start our season! 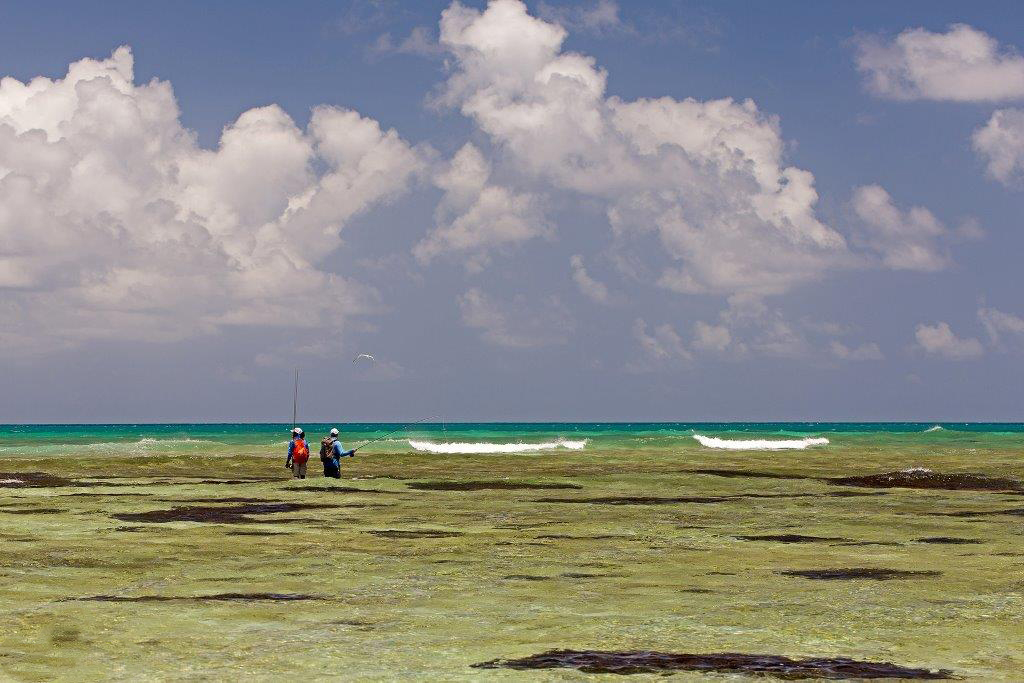 Clear skies greeted us as we head out on day two, the last bit of the drop and the full push providing an extended GT session. This worked a treat and congratulations must go to Richard, Scott and Grant, all three of them landing their first ever GTs on a fly rod..awesome! The Bones were still around in good numbers which provided some great action, however despite multiple shots at our our friends the Triggers, they had the final say on day two. But Farquhar is never to be underestimated in terms of the species options it can deliver, firstly Gerhard landed a couple of Milks from the beach, following which Heidi managed to hook and land a beautiful Indo-Pacific Permit and finally Jeff enticed and most importantly landed a 92cm Napoleon wrasse. It was another really special day out on water! 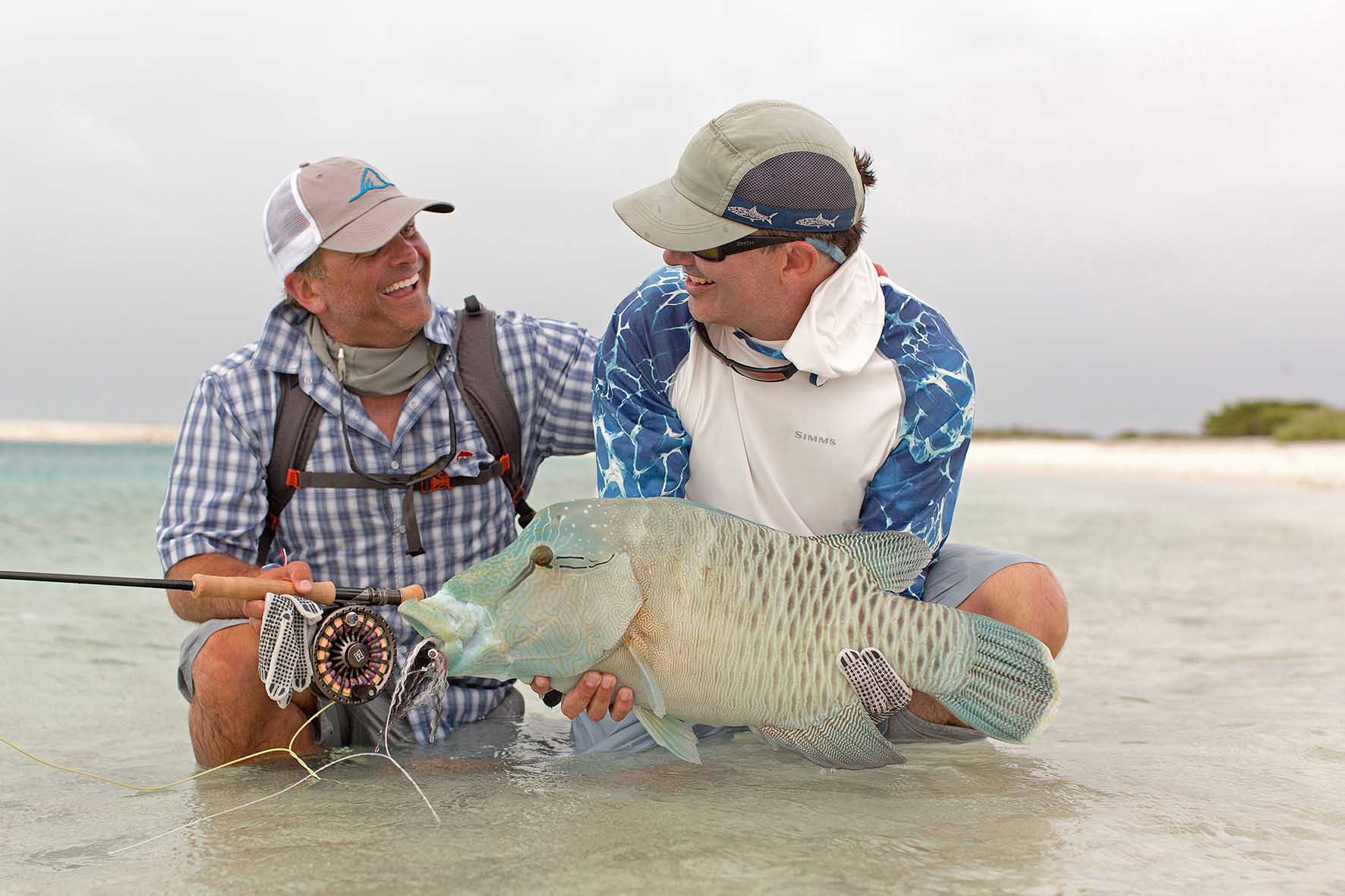 Sadly day three dawned dark & menacing, the blustery conditions deteriorating as the day progressed. With intermittent cloud bursts and brief patches of sunlight, making the most of opportunities was going to be the key. Our guests took up the challenge and were rewarded with some good fish despite the trying conditions. 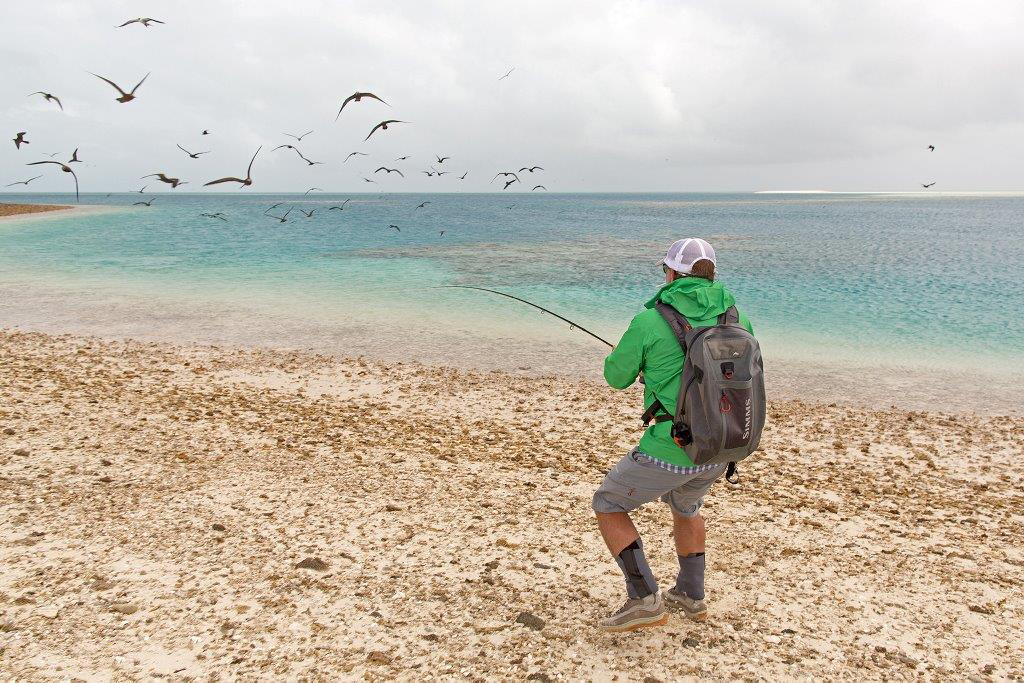 More GTs were landed, special mention going to Grant and Scott for their double up on a GT and a Napoleon Wrasse. The Bones continued to feed aggressively in the icy cold water, and eventually our first Trigger of the season went to Ben. He didn’t stop there though and managed to land our first “SLAM” for the season by ticking off a GT, Bonefish and Trigger despite the very difficult conditions! Great job Ben! 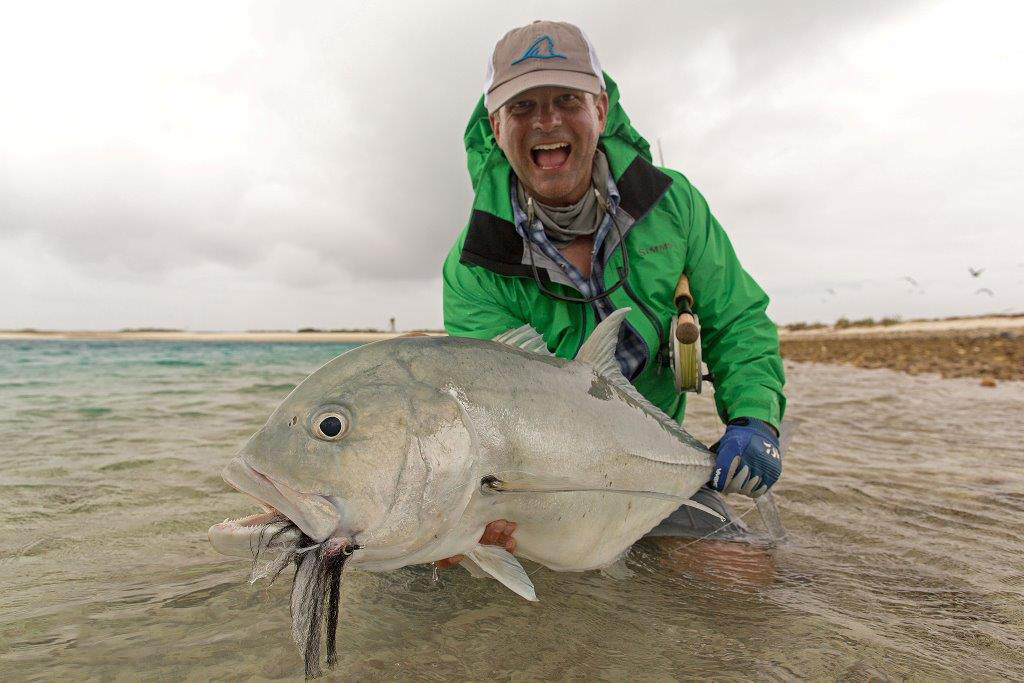 Sadly the tough conditions did not improve. A dropping tide and extremely high south easterly winds made the lagoon and the outer reaches of the atoll inaccessible by boat, so with our guests still eager to head out we waited for the mid day low tide and took the tractor to the runway flat where we could fish on foot in safety. Conditions however had the final say and despite a few small fish coming to hand, the warm and obviating atmosphere of the lodge proved too great and we headed back! 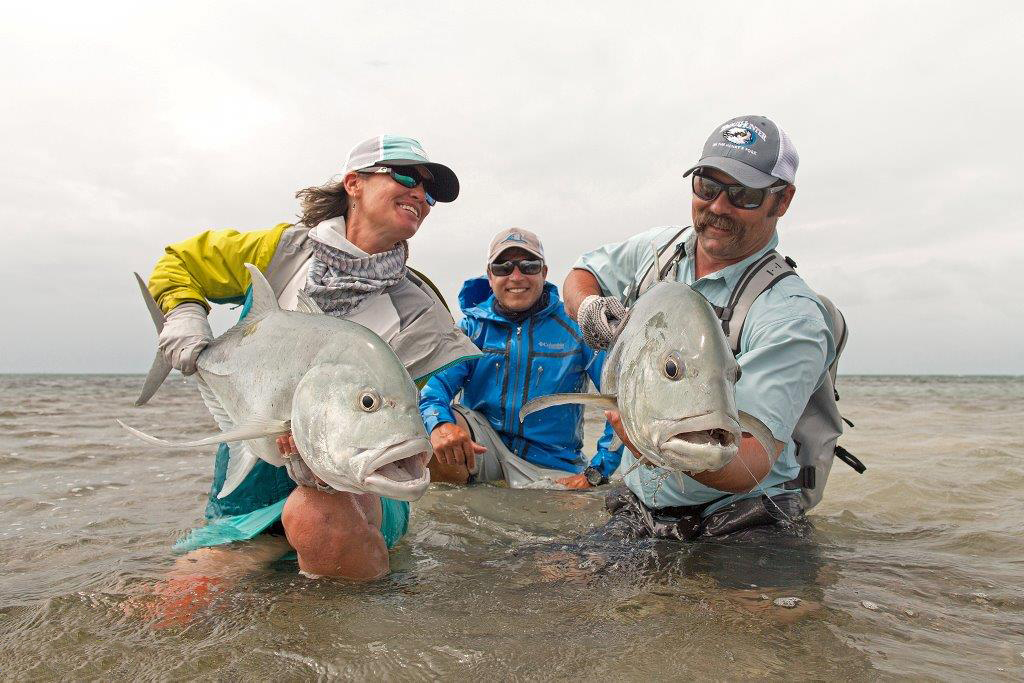 Conditions improved slightly on day five which at least enabled to us head out across the atoll. The Bumphead Parrots made their first real appearance on the week, large pods being spotted tailing across the atoll. Rich stepped up to the plate and landed our first fish of the season, his 90 cm specimen coming in after an epic battle. Good numbers of GTs presented themselves and despite too many departing prematurely, we did land some good ones. Grant in particular landed a great one, his 105cm specimen our second meter plus fish for the week. The fish was spotted hugging the back of a Lemon Shark, this time the bigger fish getting to the fly first thankfully!  After a lengthy fight this incredible fish was landed. The Triggers continued to provide opportunities but proved skittish, the Bones however anything but with huge numbers of fish encountered! 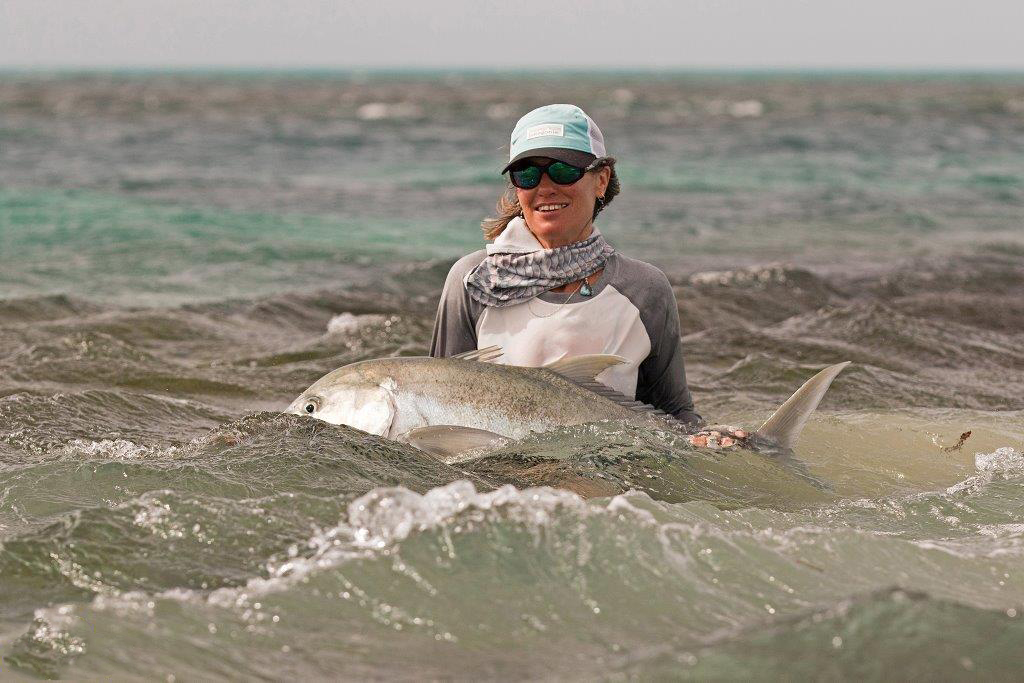 Thankfully the break in the weather arrived on our final day on the water. With a midday low we had the chance to fish and it was phenomenal. Large schools of GTs had arrived in the lagoon from the open ocean, one particular group enjoying some mind blowing GT fishing. Wading the turtle grass flat Rich and Millie saw their flies chased and smashed continuously, some epic battles ending with broken fly lines but at the end of of it 10 fish between them. A special shout out to Millie for her perseverance! During the course of the week she had hooked plenty but things had not gone her way, this changed though with her tally for the day ending at 5, the biggest of which was a gorgeous 97cm fish! Truly a great session to be a part of and a great way to end our first week back. 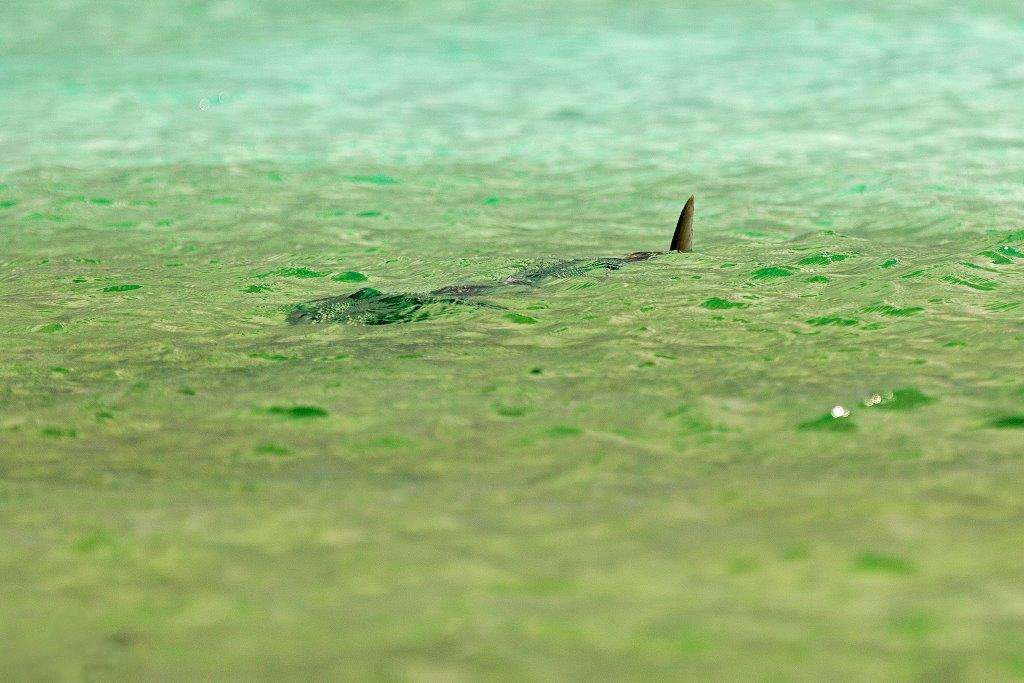 So despite some really challenging weather, the atoll indicated it’s in great shape and with the new lodge setup we are sure to enjoy an incredible season! Thank you to all the guests who joined us this week, we enjoyed our time with you immensely and really hope to see you back next year!!!!

For the latest availability and prices on Farquhar Atoll click HERE.