Being the opening day of a new season we opted to spread out across the atoll to see where the concentration of fish were highest. It was evident early on that there was a large amount of green water situated in the mid-section of the atoll and so our plans instantly focussed towards locating cooler water. On the GT front we started off slow with only a handful coming in before the day drew to a close. Thomas made the most of a GT/sting ray partnership, whilst Shamal who has fished Providence previously showed his experience by landing two GT’S in quick succession.  Tony narrowly missed out on the renowned one-meter mark prize, landing a beautiful GT of 99cm…agonisingly close but still an incredible fish! Congrats Tony! Tom who is also no stranger to Providence also managed to entice a GT after it was spotted sitting in a white sand depression. The fly was sent out and the fish annihilated it! Despite the warm water in the mid-section, the Bumpies were schooled up in their usual areas and Grigori and Tony landed really good sized fish that stretched them way into their backing (#hellobacking).  These fish were extra special for these flats veterans as they both had been searching for their first one for some time! Congrats guys! A pretty scratchy start but there were still fish to be had. 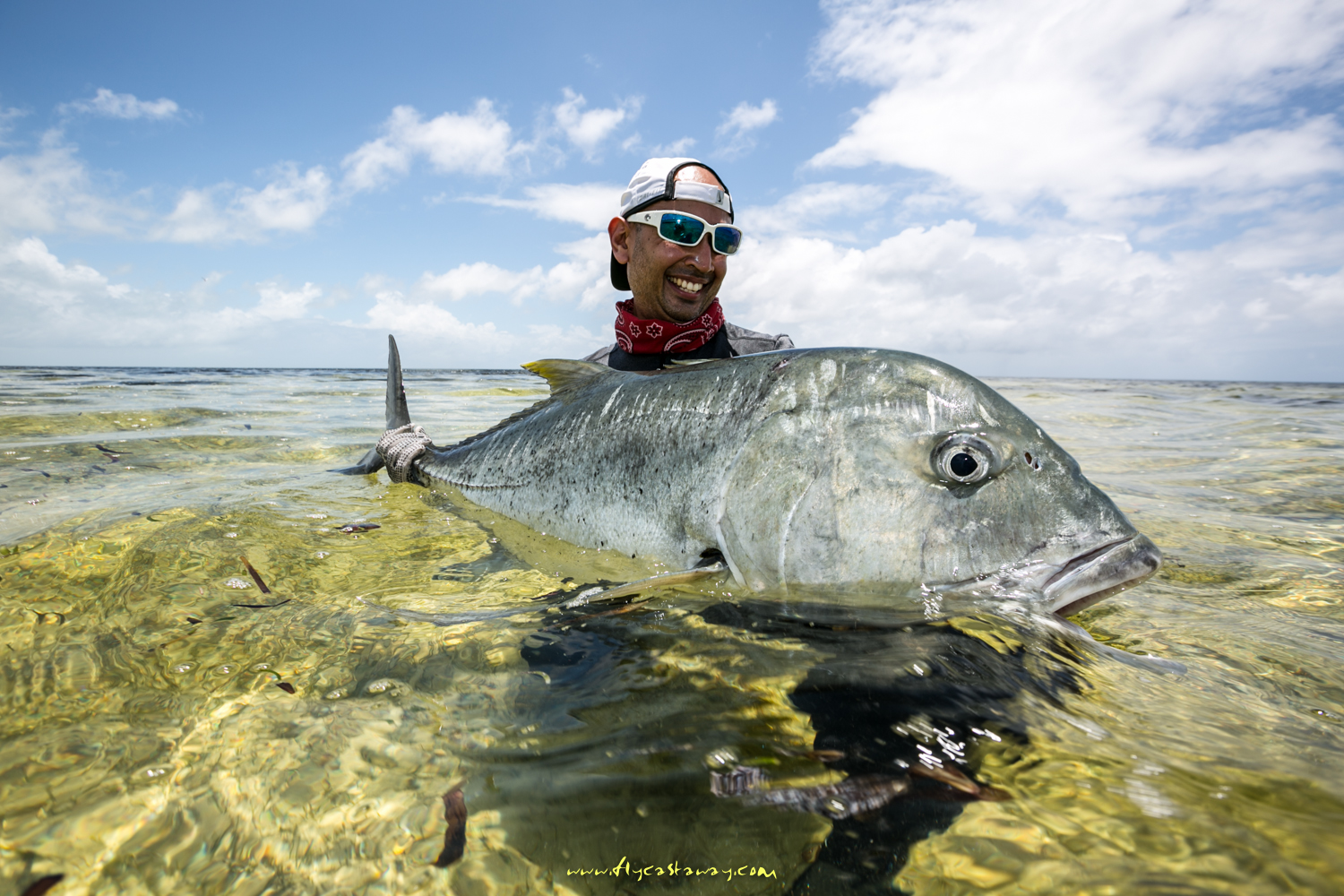 More carefully laid out and specific plans were put in place for day two. Vladimir started the day off in fine form and after a long chase got a GT to turn and rush the fly, the fish eating the fly a few inches off the rod tip. The team of Ben, Richard and Thomas had a day which really epitomises what Providence is all about. The start of the pushing tide saw Ben landing two GTs off the bat, Richard following shortly after when he hooked and landed a fish which was hugging the back of a shark. Later Thomas hooked and landed his first ever Bumpy and once the tide pushed them off the flats completely they headed offshore where their team located a school of feeding Milkfish. Richard was the first go tight and after a swift 15 minute battle he landed his first ever Milkfish. Ben then followed suit and in the dying minutes of the day hooked into his MilK.  The initial acrobatic behavior of the fish soon receded and the fish sounded into the depths.  Finally after some intense moments circling the boat the fish was finally netted. Mark also took advantage of the feeding Milks and hooked and landed his first ever Milkfish. Tony Hayes became the second guest to narrowly be denied the one-metre mark when he unbelievably also landed a 99cm GT. Good fishing friends Doug and Tony both caught GTs shortly after each other, whilst Shamal continued his fine form and landed a very nice looking Yellow Margin Trigger.  The highlight of the day however had to be the monstrous GT he landed. This fish had his name written all over it! It all started whilst wading a sand drainage area. The free-swimming GT slowly meandered out of the deep right up to the shallow bank he was wading.  The cast was set in the right area and the fish charged only to refuse the fly. Two more strips and the fish turned and came again.  At this stage, the leader was already through the front eye when the fish ate the fly.  After the hook set, the fish sped off taking Shamal’s 12wt rod tip with it. The running line then proceeded to wrap around the mid-section, and before he knew it the mid-section was gone leaving him with only a butt section and screaming reel. Thankfully things improved and despite some nerve wracking moments a 121cm behemoth was brought to hand. Just an incredible moment! 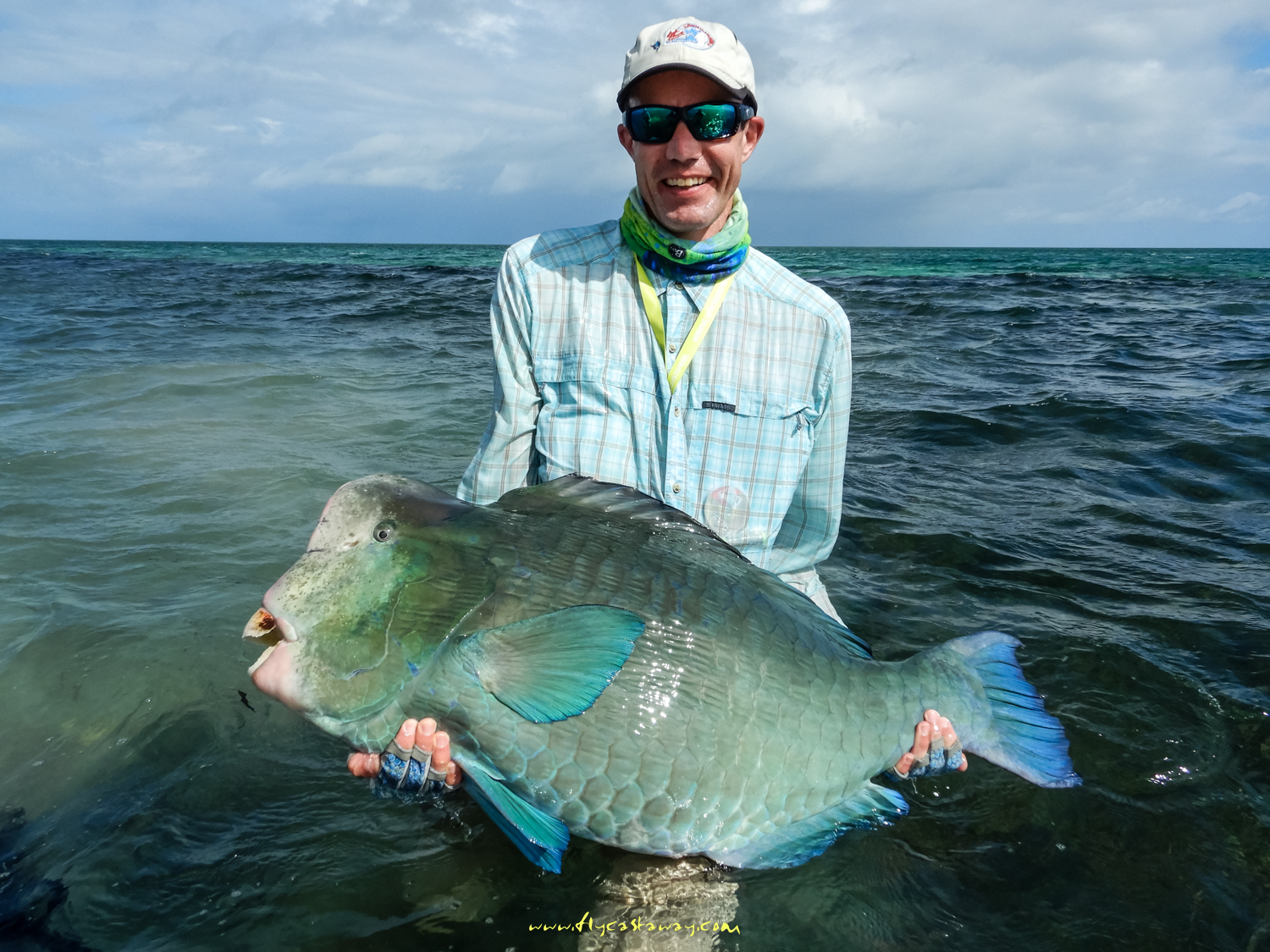 After an action-packed Day 2, the overcast conditions on the third day made fishing pretty tricky from a spotting point of view.  The team consisting of Thomas, Richard and Ben however could not put a foot wrong. Ben and Richard quickly found themselves in the thick of it once again, each of them landing two GTs a piece.  Thomas hugged an area which was holding some Triggers where he was rewarded with a beautiful Yellow Margin specimen after it pinned his crab hard against the sand. Ben subsequently swapped over to his 9wt and in typical Providence fashion what should apear…a GT swimming on the back of a stingray.  Without any time to change back to his 12 weight he had no choice but to pitch the crab fly at the GT. The fish broke off from the stingray and snatched up the crab imitation and the rest is history. Vladimir started the day fishing for the Milkfish daisy chaining literally meters off the back of the mothership. Within a couple of mins he pinned one and off it went.  The fish fought like a gladiator and eventually after being towed around for more than a kilometre he landed his prize. Shamal continued his good form when he landed his fourth GT for the trip, Mark also getting in on the action before the end of third day on the flats. 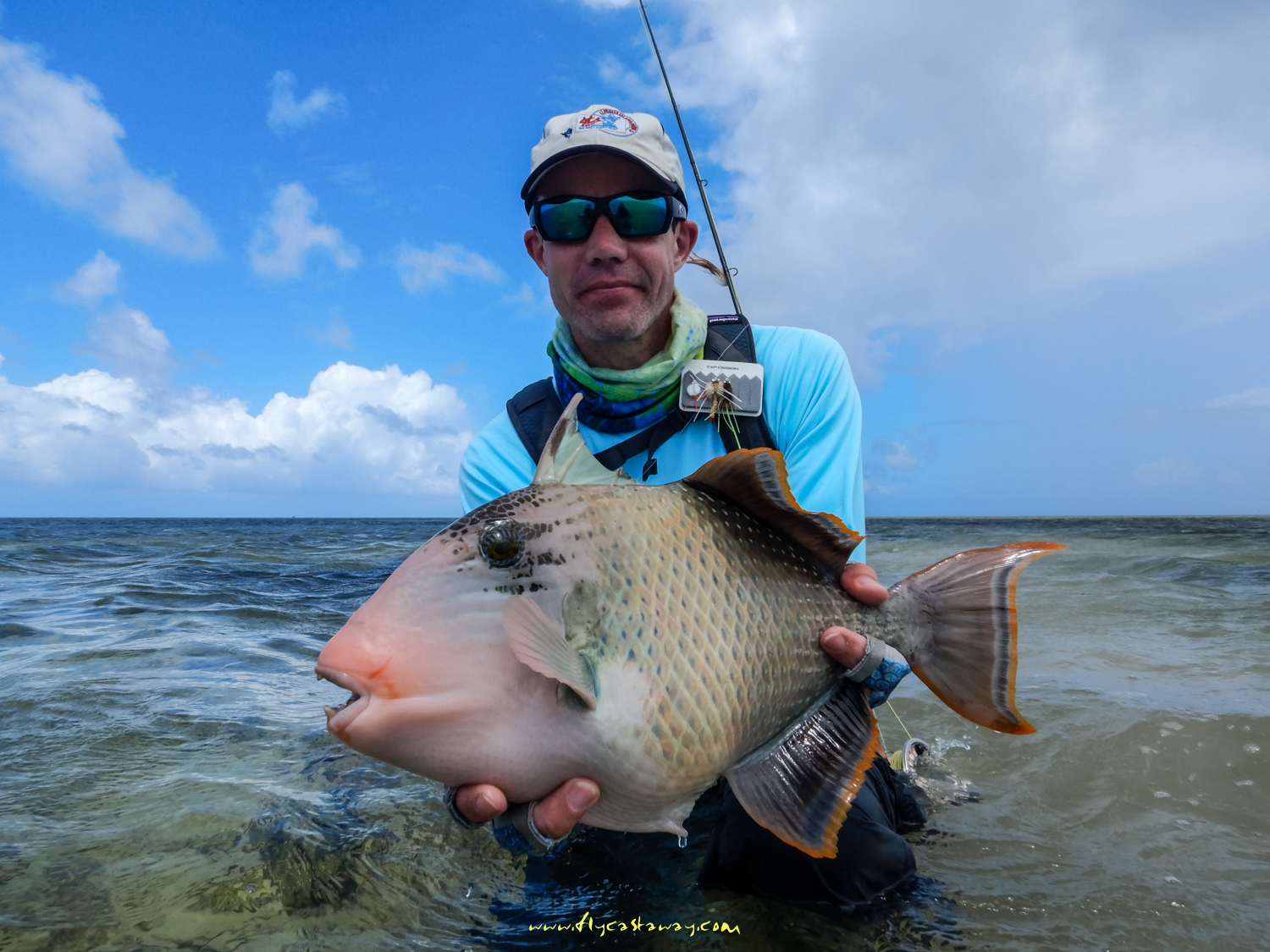 Determined to make up for the tricky fishing previous day, we set out with some seriously promising plans. Shamal stepped up yet again and landed three GTs, the largest being his second metre plus fish at 106cm. Tom, Tony, Tony, Richard and Thomas all made valuable contributions with a GT a piece, whilst Vladimir and Grigori concentrated their efforts on the currently elusive Bumpies for the first half of the day. Unfortunately luck was not on their side when the guys hooked three of the green giants and a Trigger, before becoming unbuttoned. A species focus change of heart ended and with a nice cold water push and they were rewarded with three fish. Besides the good GT fishing the group encountered numerous groupers, snappers as well as some solid Bluefin Trevally. Doug only just missed out on landing his first Sailfish when a really hot sail came tearing through the prop wash and tried multiple times to engulf the fly. 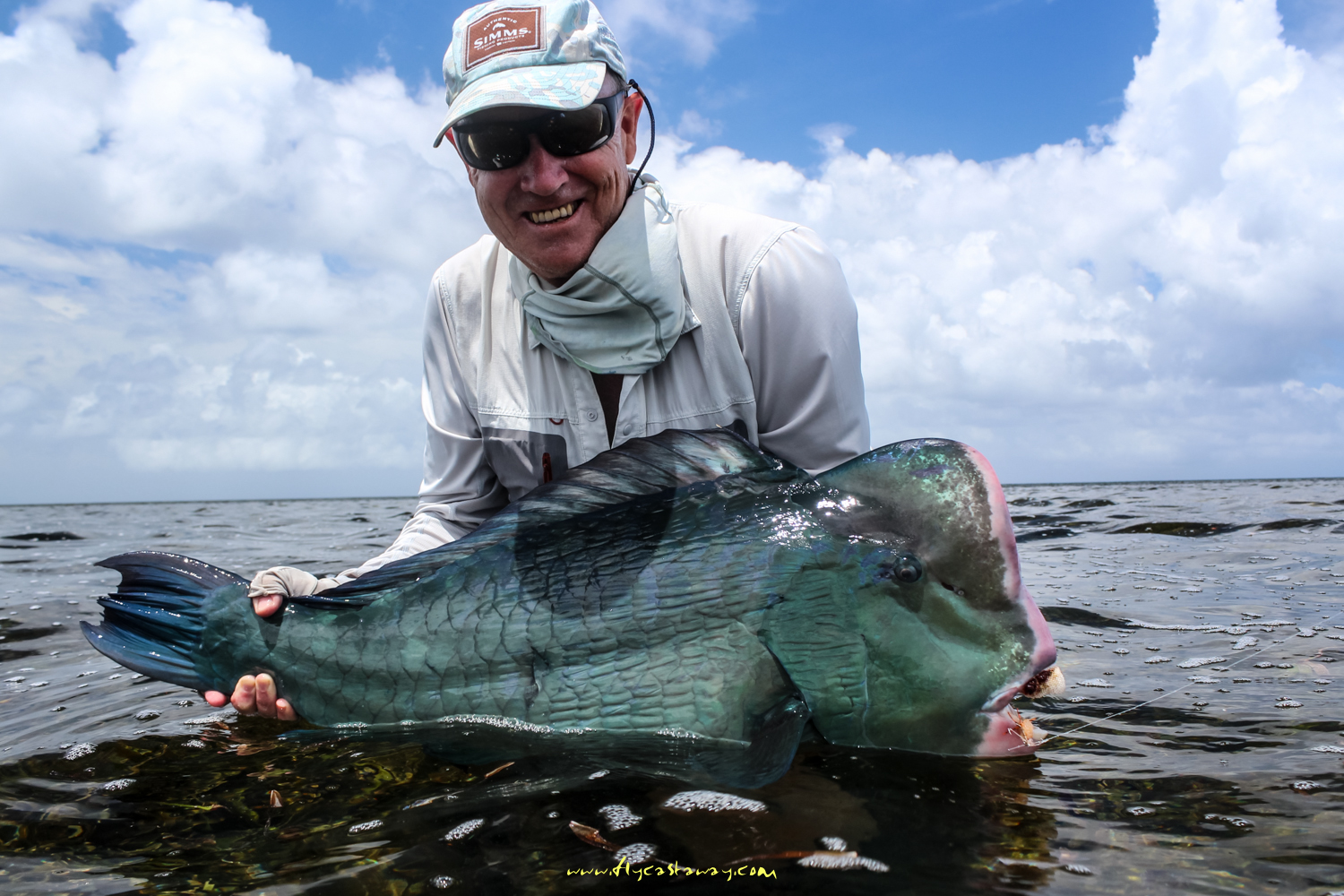 Moving to an area which is renowned for producing big fish during the bigger tides we headed out with plenty of optimism. Mark who thus far had had a reasonably quiet trip went hell for leather to rectify things. His first GT was hooked off a tailing nurse shark, the fish measuring a very respectable 93cm. Moments later he hooked and landed another fish that literally ripped backing off the reel before being subdued. Tony was very unfortunate to lose an absolute brute of a fish after his backing snapped during the fight, this also resulted in half the rod being torn off as the line snapped and disappeared. Shamal capiltised yet again with another three GT haul, including another trophy fish measuring 110cm. His boat partners Tony and Doug also found themselves in the thick of it, Tony landing two and Doug one. Ben and Rich also brought home good news as they both managed to entice two fish sitting in pots to race out and eat their flies. A really exciting day out! 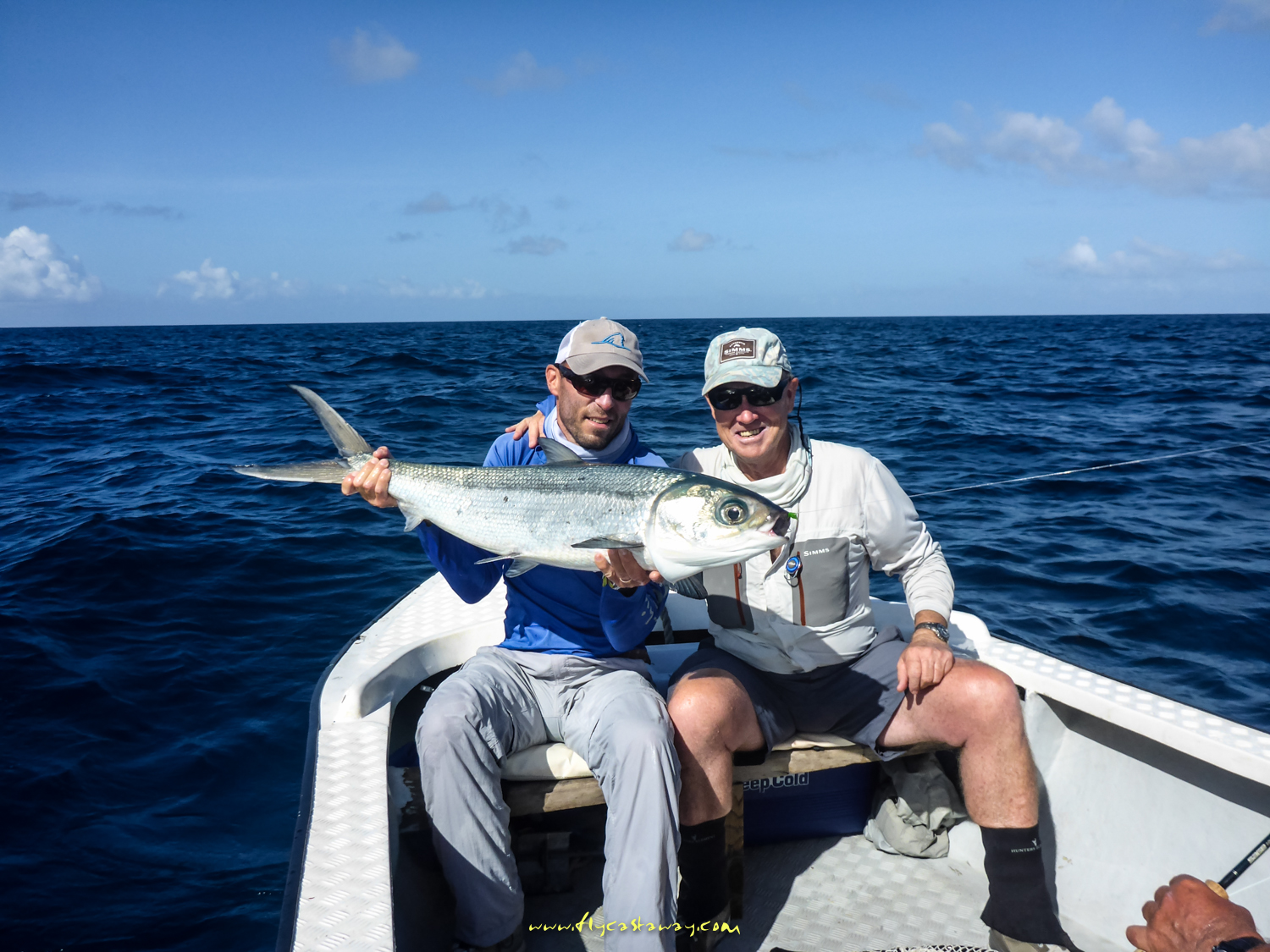 Talk about saving the best for last, well this was just one of those days.  The “dream team” lived up to their name and landed five GT, two of which broke the one-meter mark.  Richard managed the first GT of the day, followed by Thomas who managed to get his first meter plus fish when the tape stretched to 102cm. Ben took top honours landing two ‘Geets’ during his day out, the one a real slab and our second fish of 110cm for the trip. Our good friend Tony also had a cracker of a day landing his first Milkfish first thing in the morning, followed by two ‘Geets’ whilst wading the flats. Interestingly enough, one of the fish he landed caught him completely unaware as it ate the trailing fly as he scanned the flats. Incredible! Having waited patiently the whole week to get the right tides to access a remote part of the atoll, two boats set out in hot pursuit not only to target fish but also to explore areas that have never been fished before.  The wait proved well worth it, with the team of Vladimir and Grigori landing five and two GTs respectfully. One of Vladimir’s fish also broke the one-meter mark stretching the tape to 103cm. Shamal later raced up to a tailing GT and pinned it, bringing his GT count for the week up to an impressive eleven. Tony enjoyed a very visual GT eat when the fish chased the fly down from a long way away, almost beaching itself before setting off into a deep lagoon following the hook set.  Doug however took top honours for the day landing three GTs, his massive 119 cm fish almost putting him through the coral. Not a bad way to open your 1m mark account…congratulations!

All in all a very cool opening week. Sure we encountered some tough periods by Prov’s high standards but the atoll showed us yet again you better not let your guard down, special fish are just the next waded step away! Thanks to all the guys for a great week together, we really hope to see you back during the next season or two.