We enjoyed six days of some the finest sight fishing the planet has to offer. After a hugely successful and fun first trip, our crew for the next round were champing at the bit get onto the atoll and get stuck into some great fish! 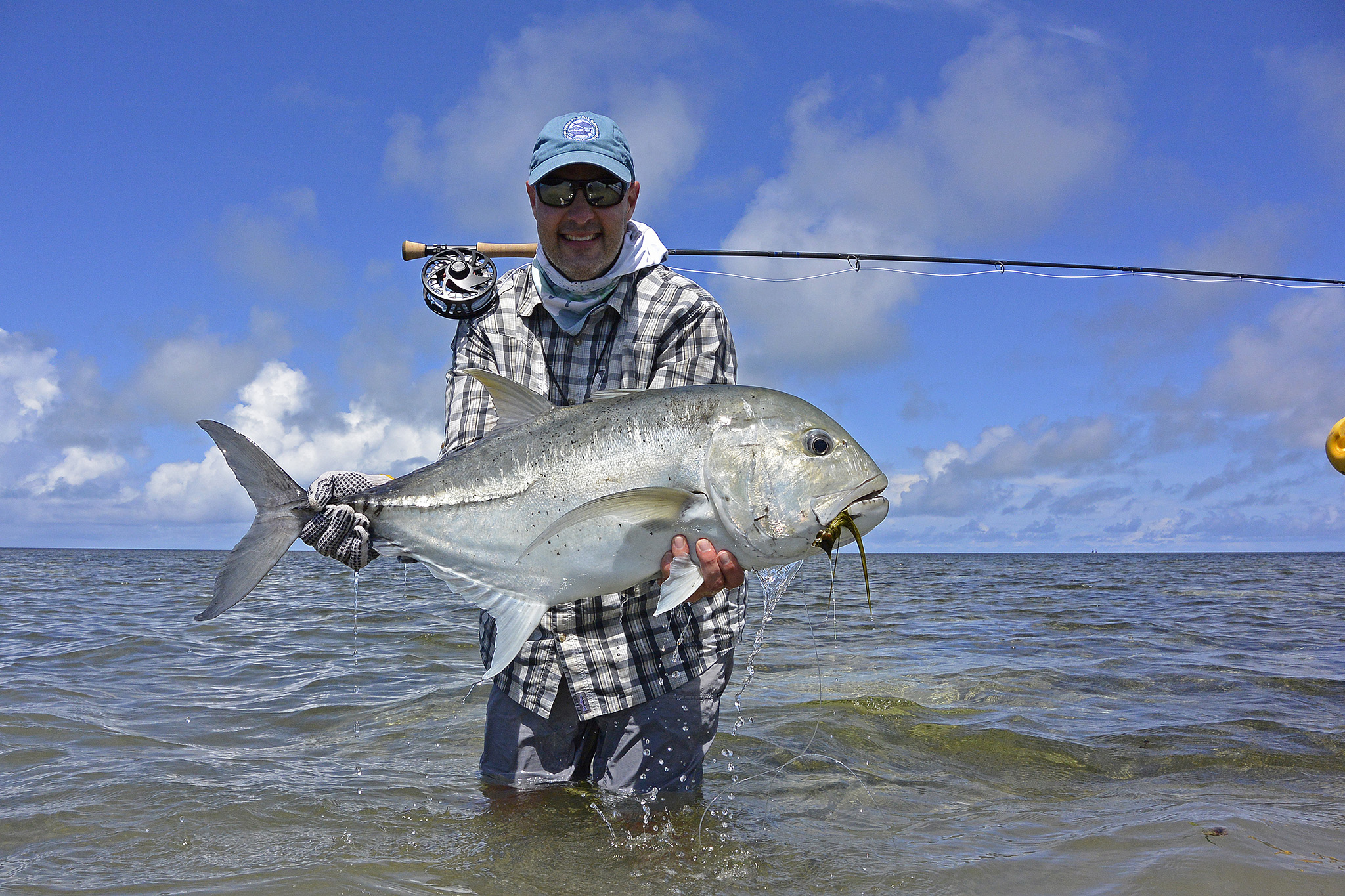 Day one, we enjoyed an early morning pushing tide which allowed immediate access the flats straight off the bat. We were also on neaps which provided ample wading to fish both the push and the drop later in the day. Best of all however was the fact that the fish were around in full force and everyone managed to get stuck into some awesome fish. This was a pretty good effort to be honest as the visibility was not the great which means spotting fish becomes even harder. Nonetheless good numbers of GTs came to hand!  Congratulations to Jarod and Christian for tailing their first ever GT’s on fly…always a special achievement. The Bumpies were around in the good numbers on some areas of the atoll, a fair few were hooked and even more impressive that we landed two of these fish on our first day out! Hats off to Hamish and Dom for landing theirs. Dom had a really special day as he landed our first Slam for the trip, with Bonefish, GT and the Bumpy getting his week off to flyer. Speaking of Bones, they were around in good numbers, the tides and water movement allowing for some great tailing action. The triggers were certainly far from absent but hooking and landing them was not be on what was a superb day out! 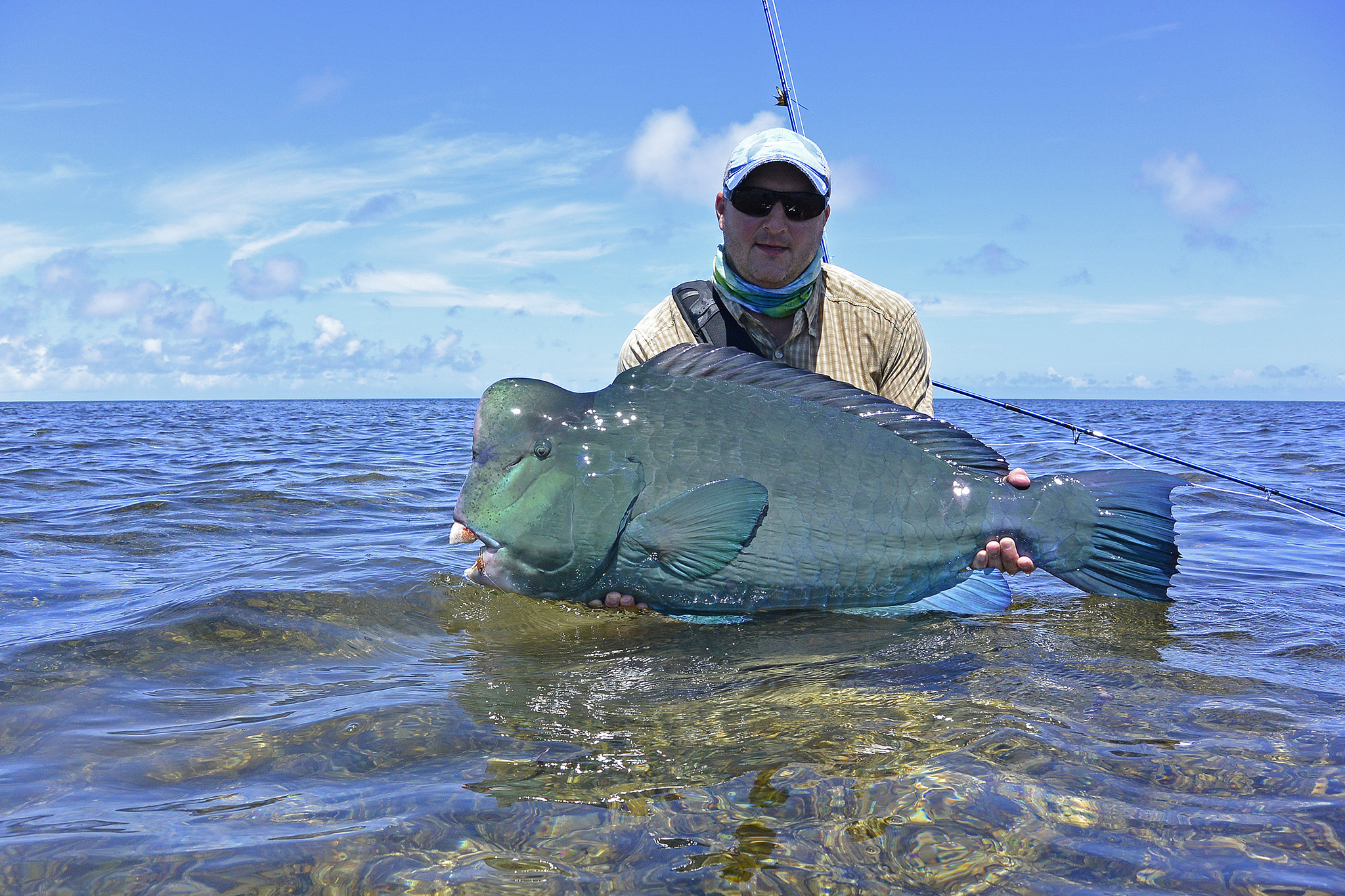 Day two, the weather looked promising and on the run out to our spots we ran into loads of hard feeding milkfish. The fish were feeding high through the scum lines created on the dropping tide but unfortunately despite hooking a couple none made it to the nets. The GTs were around throughout the day and we managed to capitalise on a few of them, whilst the bonefish continued to provide some superb skinny water tailing action. Jarod opened our triggerfish account, impressively landing two Yellow-Margins during the course of the day…awesome stuff! The Bumpies were still around in big numbers and we managed to hook quite a few. A huge congratulations and mention must go out to Brandon for landing three…yes three of them during his time on the water! 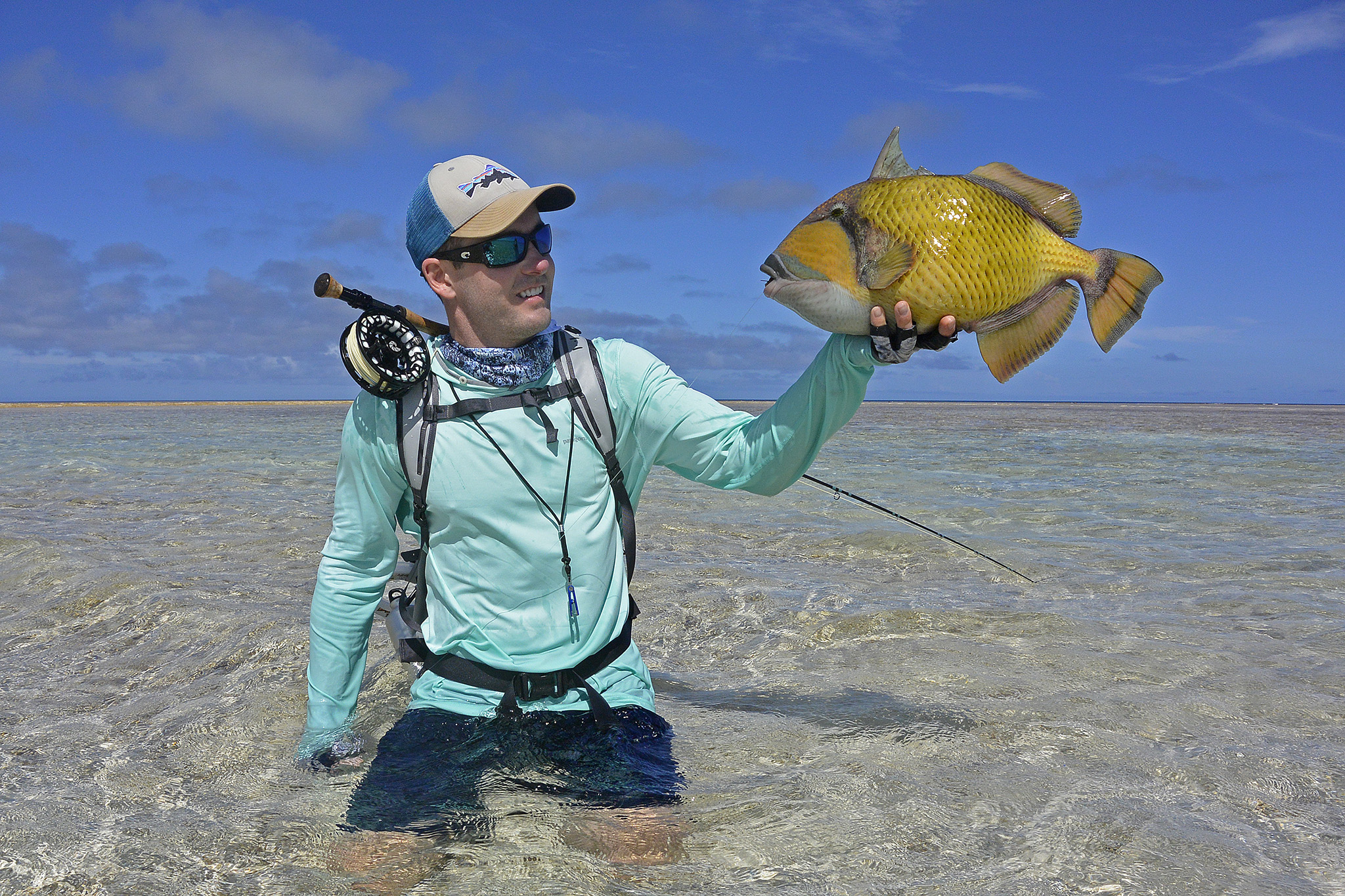 Day three provided challenging weather again, much of the day spent battling low light and some squalls. Nonetheless the guys were now into the swing of the GT fishing and managed to take advantage of most of the ones we saw. The bumpies continued to present themselves in good number, Andre getting an absolute slab of a fish which measured over the meter mark. Opportunities at Triggers were provided despite the tough light, Jarod doing his thing once again landing his third Yellow-Margin for the trip. The low light did however provide some insane bonefishing which many of the guys revelled in. So despite the tough conditions it was a profitable day out, Andre in particular enjoying our second Slam of the trip, landing a GT, bumpie and one of the biggest Seychelles bones you are likely to see. He is a giant of a man so the photo probably does not do the fish justice! Congrats Andre! 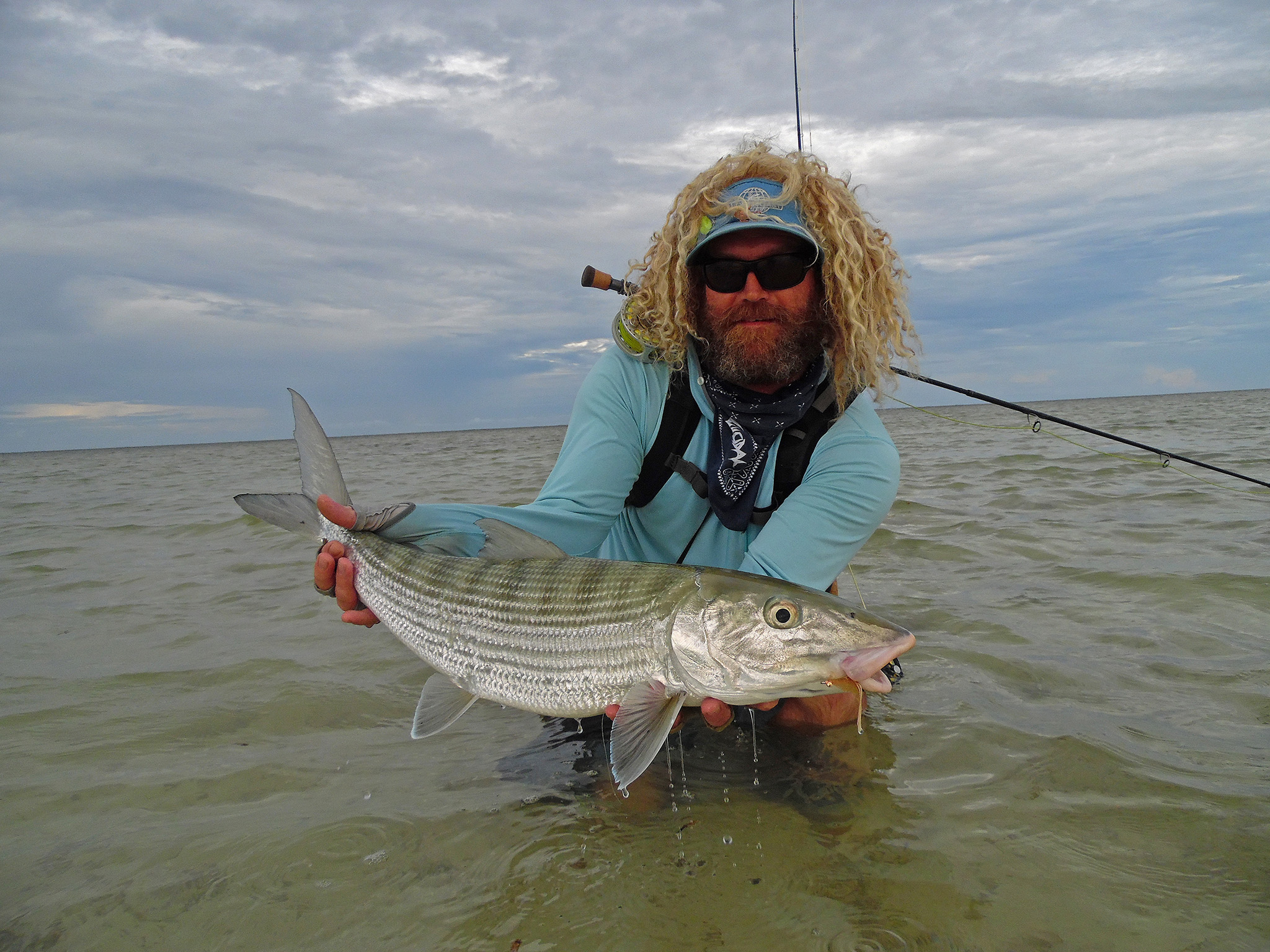 Waking up to clear skies on day four brought about increased energy levels amongst the group. The GTs were around in big numbers with a late morning pushing tide and good visibility providing some truly memorable fishing. A huge congratulations to Hamish for landing his first GT on fly, surely there’s no better way to feel the raw power and intensity of these amazing fish. The Bumpies continued to provide opportunities, Dom eventually managing to get one to hand after having had some terrible luck in previous encounters. The odd Trigger was still seen although the bigger tides were now providing only small windows to walk and stalk them. The Milkfish had been around on everyone day almost, but few had actually been landed. This changed though when Dom and Hamish each landed their first ever Milks…well done guys! A really productive day out, with countless grouper, snapper and emperors providing those colourful finishing touches to a superb day out on the water. 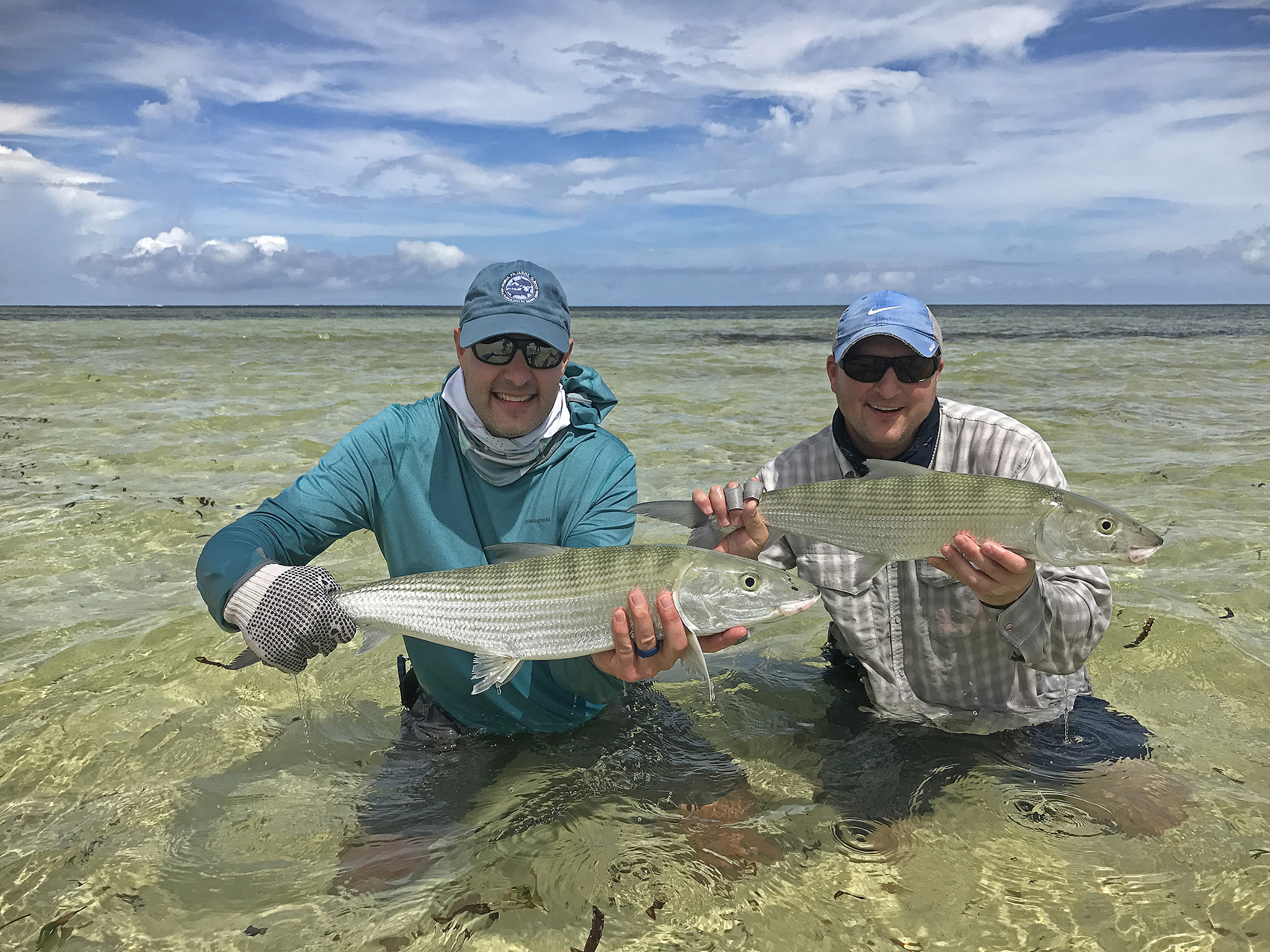 Day five kicked off strongly, the Milkfish feeding hard off the current lines. Andre and Zenon continued to wrack up the species on their trip, each of them landing their first Milky. A special mention must go out to long time client and great friend Peter Whitaker who after dozens of Seychelles trips finally had luck go his way and landed his first Milk. Congrats Pete!!!! The GT fishing in truth proved a little slow, although we did manage to tail a handful of our favourite friends. It was clear though that some seriously big fish were now arriving on the flats, although broken fly lines and other misfortunes had their way with us this time round. The weather soured later in the afternoon which made fishing a bit of a challenge for the remainder of the day! 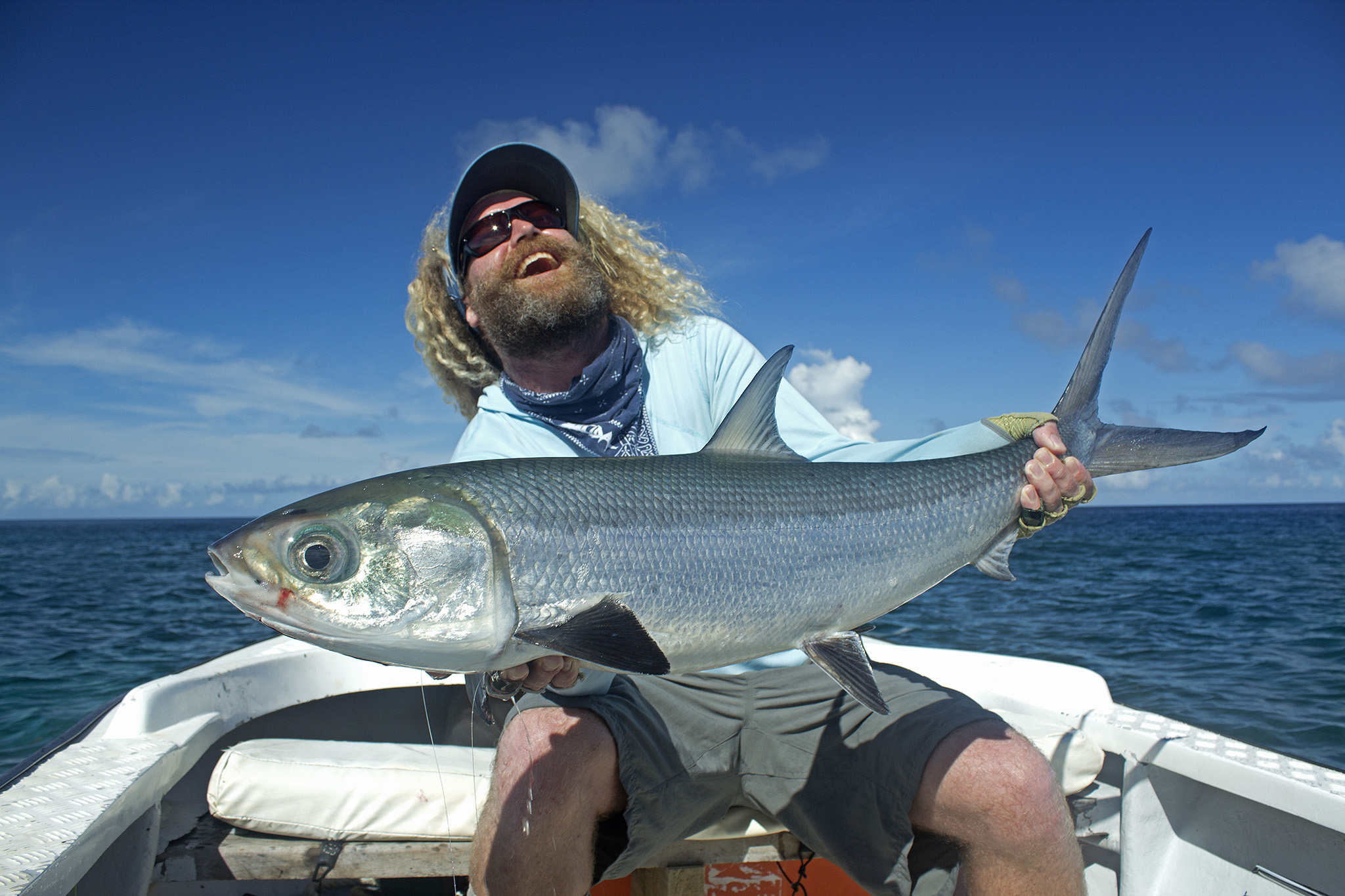 The skies were clear on day six and everyone was ready to make the most of their last day out on the flats. The GT fishing was particularly productive with quite a few coming to hand including some good ones. Dom managed to break the meter mark with a 101 cm fish. The fish was spotted sitting in a white sand pot in a series of deep depressions. After the guide and angler swum across some deep holes to get into range the fish actually starting moving towards them, slowly lifting up over the lip of the depression. The fly went out and the cast landed two meters short. The fish noticed the fly and after a couple of short strips cruised up and sipped in the fly. The fish tore off off but Dom held firm and gave it a jolly good hiding – his backing not even seeing the light of day. Well done! Andre was again on the money and on his last day landed a true trophy, his GT measuring 112 cm. Awesome fish Andre. The triggers seemed to have all but disappeared, but Jarod was on their case as usual. With his fourth cast at this species of sin he hooked and landed his fourth, this time our first Giant for the trip. Not many guys get to cast once at a Trigger and land it, let alone make 4 casts and land all four targets. Great job! The Milks were still around and we hooked a few on our last day out, sadly most came off prematurely except for Jeff who held firm by landing his first for the trip. The guys also enjoyed a huge variety of species on the day, one truly special fish and moment belonging to Hamish when he landed the Barracuda he had been dreaming of. 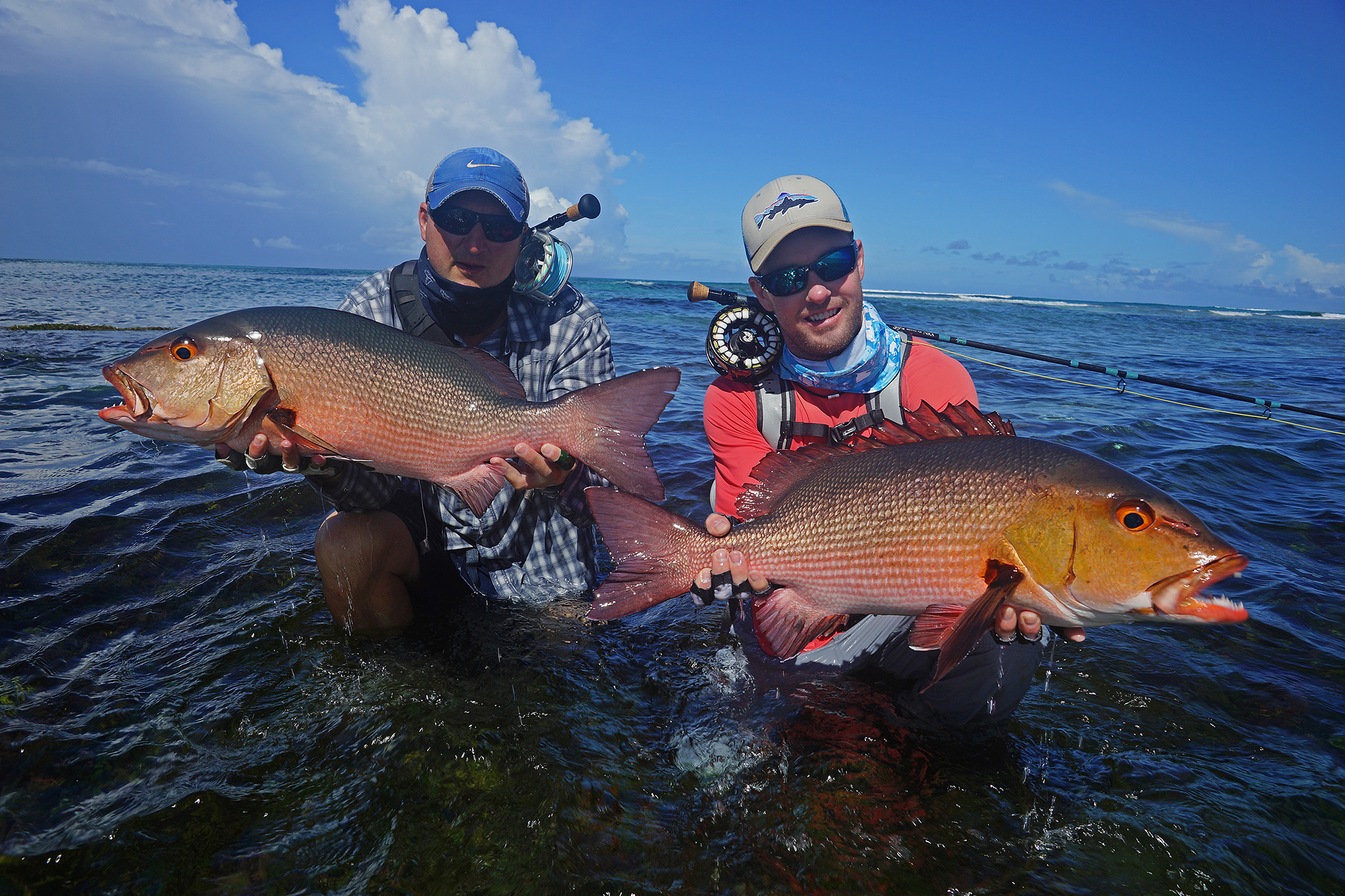 All in all it was a great week to be a part of and we would like to thank the entire group for travelling out to fish with us. We had some tough weather to contend with for sure, but we caught some incredible fish and ticked many species off the list. Providence is such a special place….we cannot wait for more!