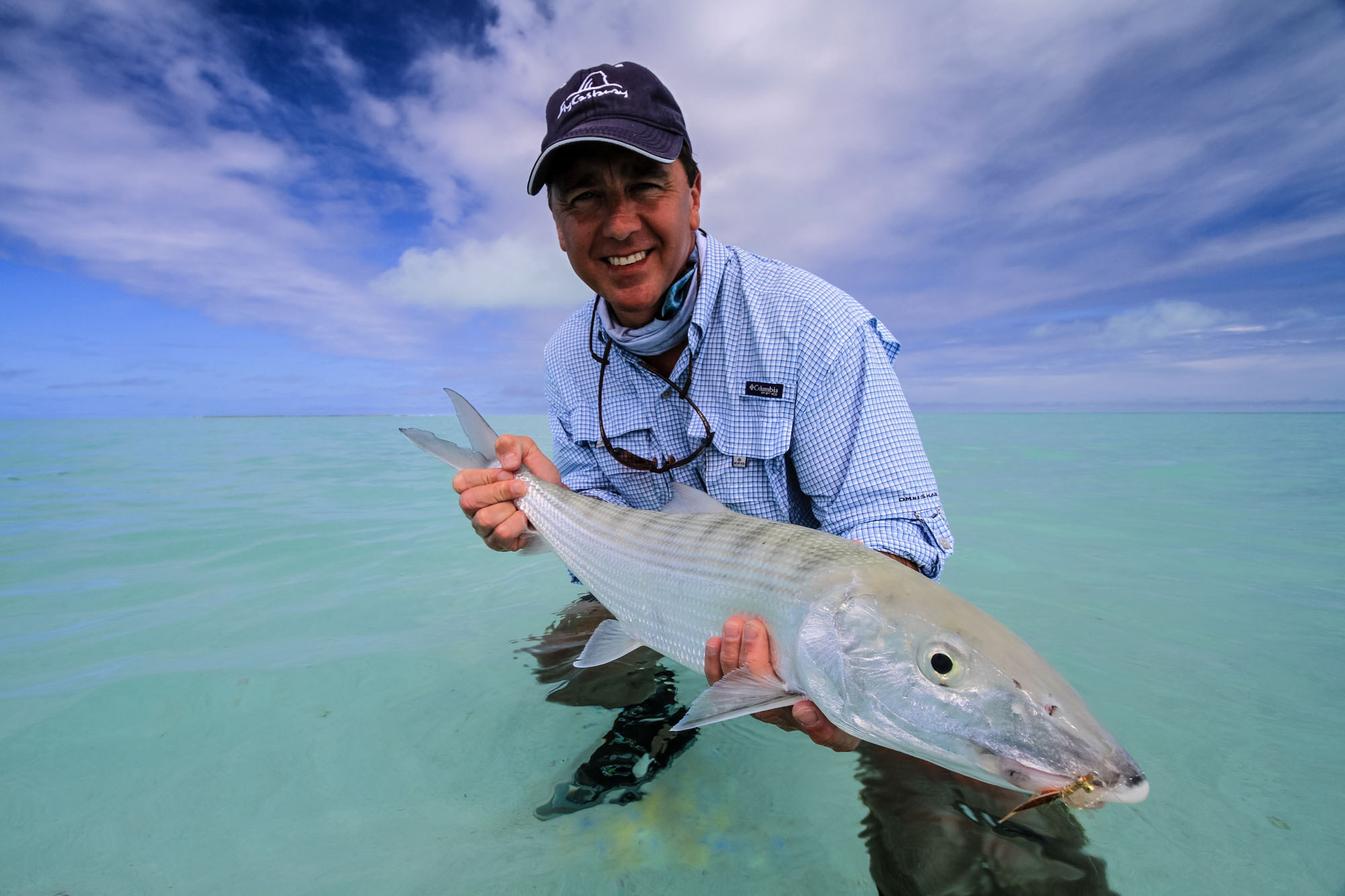 Despite some pretty tough weather during the first trip of our 2015/2016 season, the atoll showed just why it is so revered as a saltwater flats fishing destination with no less than six 10 lbs plus bonefish being weighed.

Our first day out was pretty tough by St Brandon’s standards, stronger than average winds making things a little challenging. Nonetheless everyone had experienced the impressive run of some solid St Brandon’s bonefish by the time the sun dipped under the horizon. 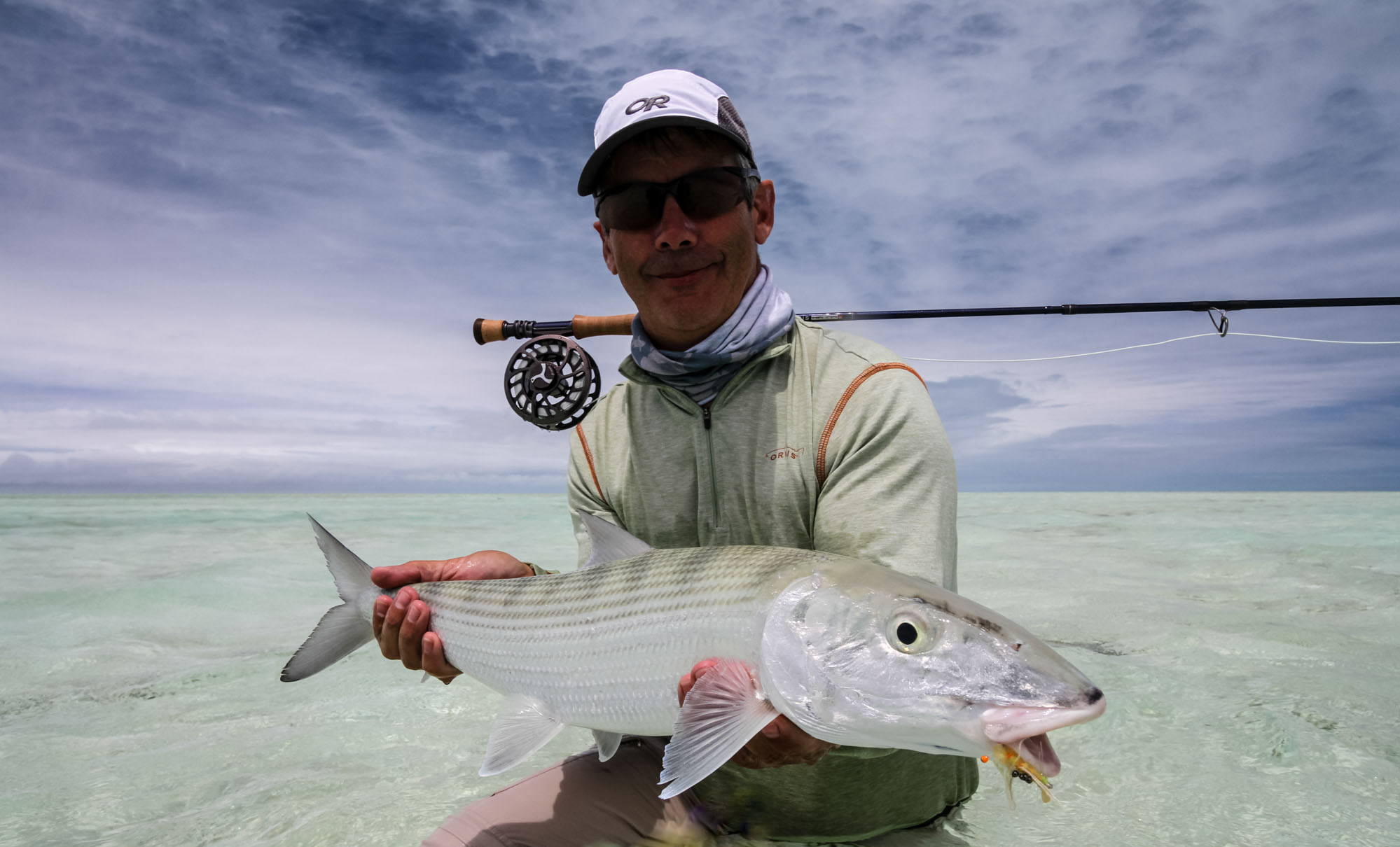 Day two was gorgeous, with a light breeze and clear blue skies making spotting fish a real treat. Subsequently everyone enjoyed the incredible skinny water bonefishing that St Brandon’s has become known for! Ferdi B opened up our 10 lbs bonefish account for the season with a beautiful specimen that ate in ankle deep water. Congrats Ferdi! He quickly made another first; within an hour he had added an Indo Pacific permit to our list of firsts for the season. Following a large single bonefish, the fish followed the fly for what seemed an age before finally committing. The decision was quickly made to look for a GT in an effort to get the Grand Slam. On the first drift over a favourite sand spit, two nurse sharks with some passengers were spotted moving their way up a funnel. Ferdi made the cast and one fish charged in and smashed the fly. The hook set was made and the fish tore off. First GT of the season was on. Sadly however after an incredibly powerful 15 minute battle the fish found its way over some coral. It was heart breaking, but looking back it had been a great day to be a part of!

Our third day on the atoll dawned much the same as day two, with clear blue skies and another light SE wind beckoning us out. Our guests capitalised on the tides and conditions with many fish between 5 and 9 lbs being stalked, cast to and landed in remarkable skinny water. During this period Mark had spotted a single fish in the distance and began the stalk across to it. After getting into position he made a solid cast into the strike zone, the fish smashing it against the hard flat. Water sprayed everywhere and his reel sang as a very large fish attempted to free itself. Thankfully after a few nervous moments and some blistering runs the fish slid into the net. It weighed 10 lbs and was our second double-digit fish for the trip. Sadly the weather turned for the worse as the day went on and in the end the decision was made to head back to the comfort of the Gryphon.

Day four and the weather had not improved. Despite everyone itching to head out, a decision was made not to head out onto the flats in the morning for safety reasons. This is never a pleasant piece of news to give our guests considering how far all of them have travelled (thankfully we don’t have to do it often) but safety comes first and knowing the sort of fishing which can transpire after a really bad weather day the guides remained optimistic. Sadly however it never improved and we held thumbs for better conditions the next day. 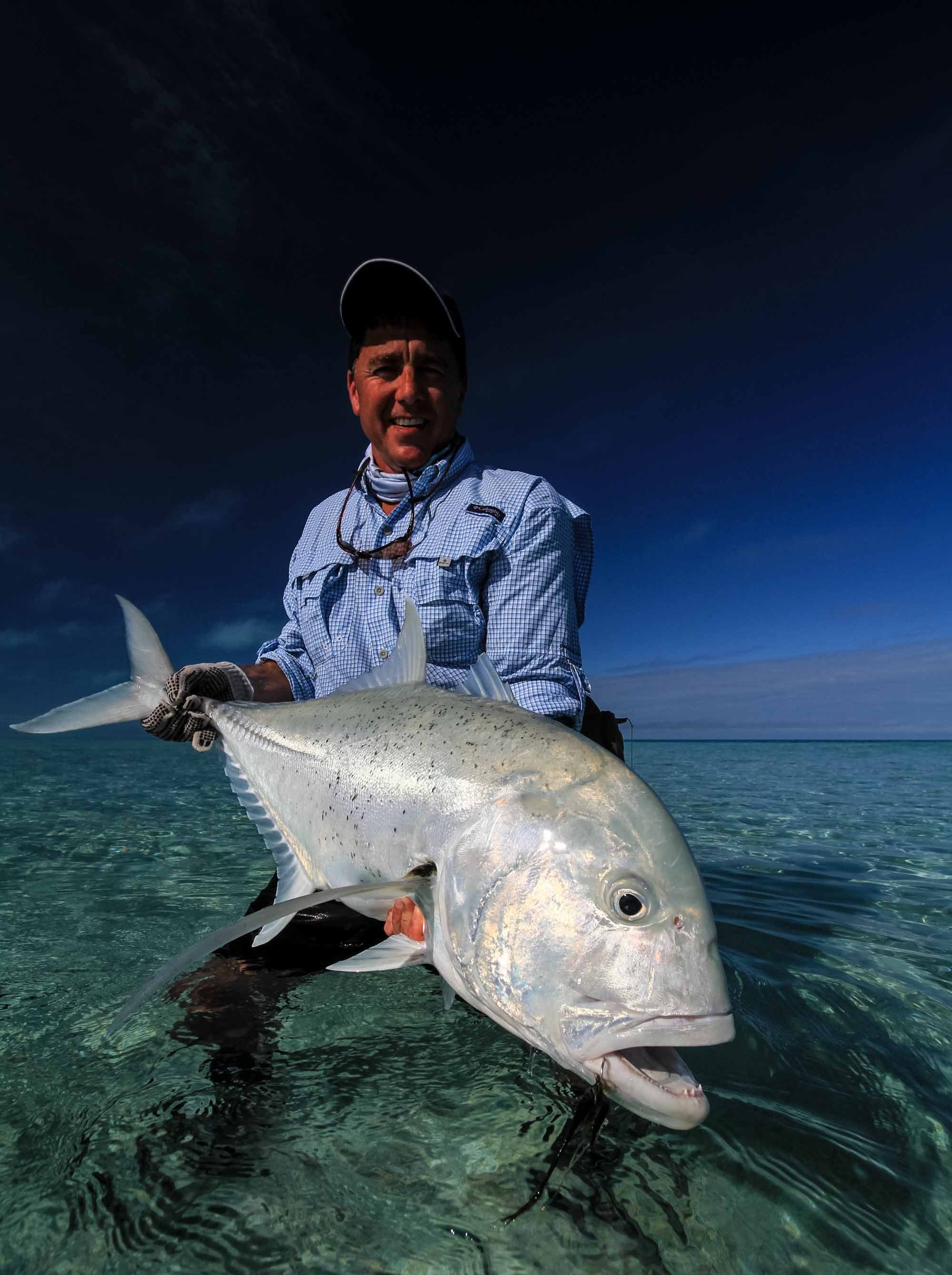 Our fifth day started off with an overcast sky and relatively strong winds but as the day progressed the sky cleared and the wind dropped resulting in prime conditions. The fishing turned on and we made hay. Steve in particular had a bumper of a day, laying into the bones in a big way as well landing a beautiful brassy trevally. He could have had a golden trevally as well, but a cheeky shark made sure the fight ended prematurely. He was not done though and at the end of the day whilst stalking some bones he spotted a pack of GT’s cruising the flat. He moved, the cast went in and the rest is history. Not the biggest St Brandon’s GT but a prize on any atoll at a solid 85 cm fish. 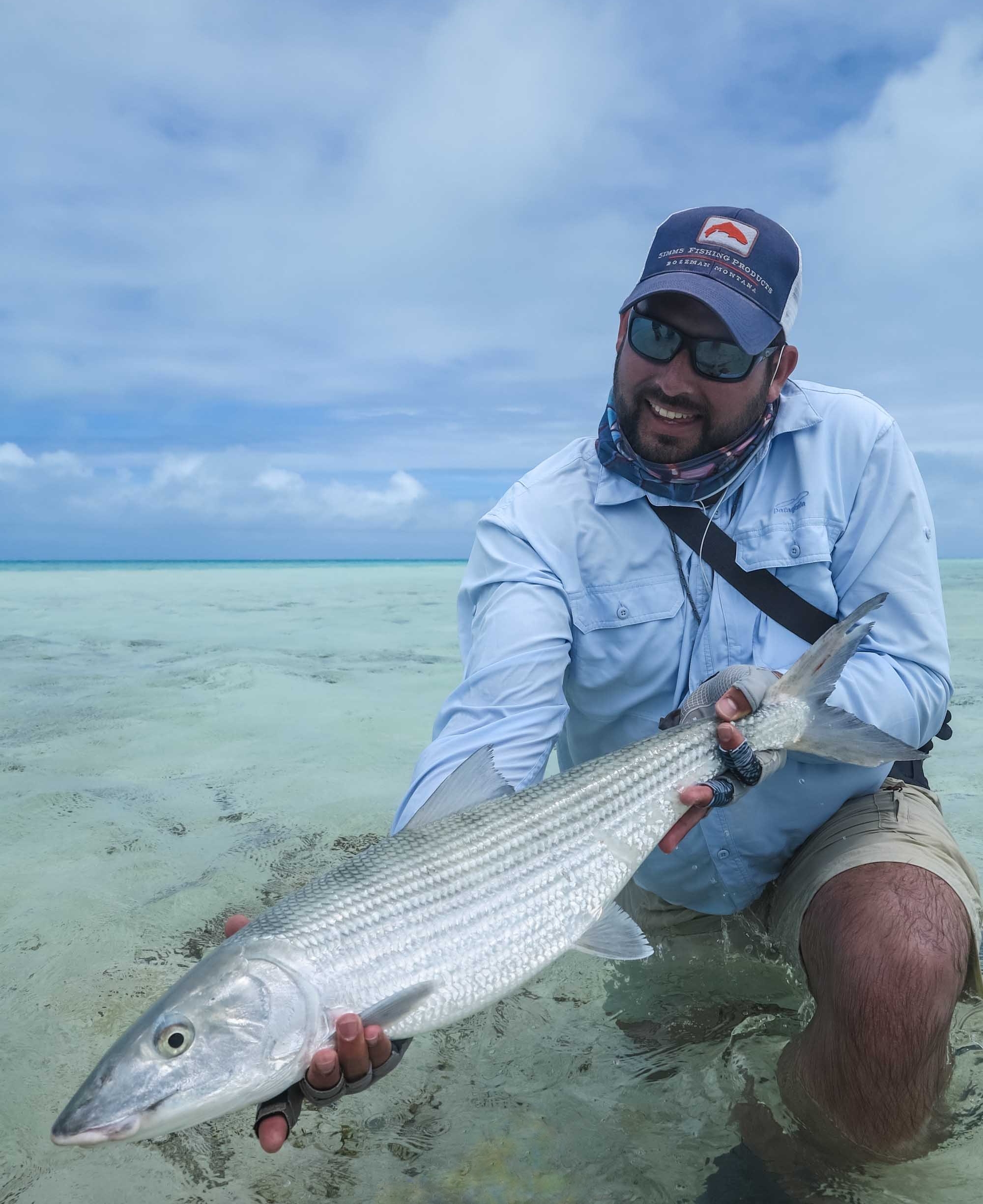 Everyone headed out with enthusiasm on our final day and it paid off, with great bonefishing being enjoyed by all. On the notables’ front, Eugene sighted and stalked a behemoth bonefish. He made the cast and the fished charged the fly, knocking a smaller fish right out of the way before crushing it. After a long intense fight Eugene landed the biggest bone of the week. A truly special fish Eugene…well done! Added to this his dad Ferdi had landed his second double-digit fish for the week 20 minutes earlier so it was another memorable moment to be a part of. Randy too joined the 10 lbs Club on the final day! He quietly stalked the fish in super skinny water, made the perfect cast and the fish charged the fly. There was no way this fish was going to miss that meal! After a blistering first run Randy managed to subdue a beautiful St Brandon’s specimen. What a way to end his trip!

With fine weather and a gentle sea, we headed back to Port Louis experiencing a very pleasant crossing to round off the trip. A big thank you to the anglers for joining us on the atoll, we hope to see you all again soon!

For more information on St Brandon’s Atoll including the latest availability please contact us or call +44 (0)1980 847389 for details and availability.