The Finest Trout Fishing in Europe? 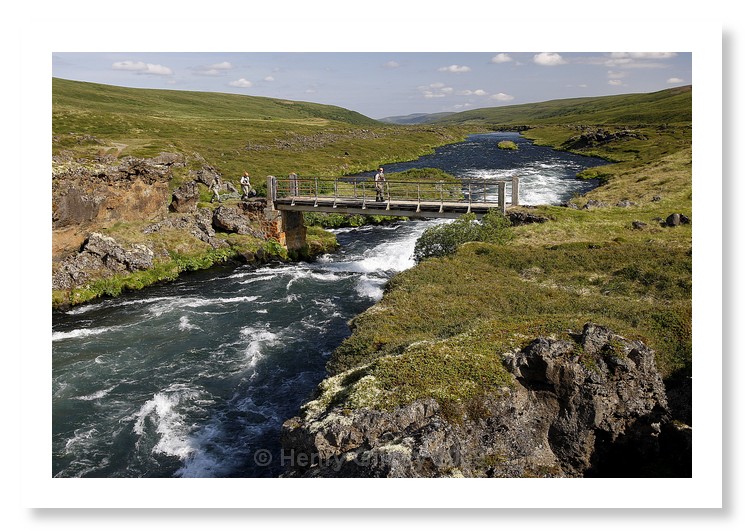 Bjarni was at the lodge good an early to take us up to Myvatnssveit where we would be fishing for the day. The sun was out and it looked like it would be perfect. Having donned waders and wandered over the bridge we had a taste of what the day was to hold. Just above the bridge in the slack water were a cluster of rings as trout rose freely to the midges coming off. Although there are none of our normal variety of biting mosquitoes in Iceland they do have a number of other Chronomids that the trout feed of readily. The brown trout in the Laxá I Adaldal have only a few short months of the Icelandic summer to feed as much as possible, so they really feed hard below or above the surface. I would hasten to add this does not make them stupid, but by matching the hatch you have a good chance of experiencing some of the best trout fishing in Europe. 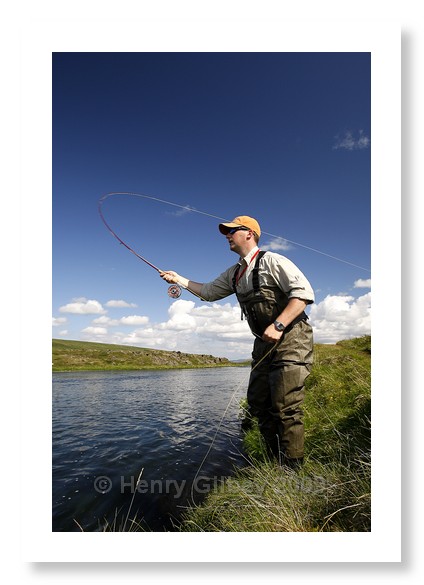 The two areas combined have over 20 miles of fishing and is divided into 15 beats , each accommodating between one and three rods. Each year numerous five pounders and a few seven pounders are caught. Occasionally eight and nine pounders are caught, and currently there have been three fish of 13 pounds caught. Bjarni started us down the bank intending to take us to one of his “special spots”, but we never made it there. About 300 yards from the bridge we found what the Americans call a “Wolf Pack”, a school of large trout sipping midges off the surface. The current was moving fast, but the fish were feeding over a shallow bank in the middle. The sight of large fish head and tailing right in front of me was getting me very excited. 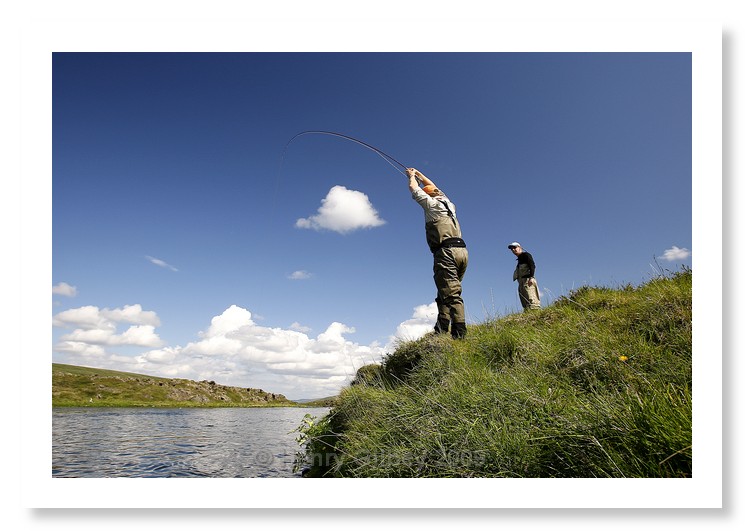 Under Bjarni’s advice I put on a black hopper and started casting. These fish were certainly being choosey and I had to get my fly in the dinner line, but after a little while a fish head and tailed on the fly and I struck. The 5 weight Hardy Angel TE was practically wrenched from my hand as the disgruntled brownie took off downstream. I had heard that these fish were a real handful and this trout was certainly living up to their reputation. The fish led me 150 yards downstream before I managed to manoeuvre it towards Bjarni’s waiting net. A cracking fish of about 5 lbs. I managed to take two further fish from the feeding pack before lunch, and in 5 hours we hit the same area as these fish rose consistently the entire time. A couple of fish at the head of the pool that rose sporadically looked like they were not far off double figures. I have never seen trout like it, and the sheer power when hooked was mind blowing. 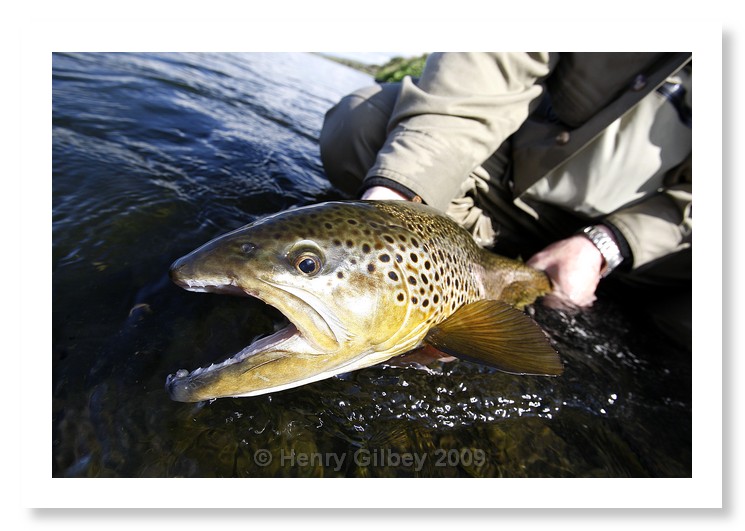 We headed up to the Hoff lodge next to the upper beat for lunch before starting the afternoon shift on a stunning beat the flows from Lake Myvatn itself. This whole section is braided with small islands and channels, and fishing it very much reminded me of wandering around the bonefish flats and Mangrove back country.  Martin caught a fantastic fish of approximately 6 lbs that was feeding avidly behind some rock structures. It gave him one hell of a fight pulling him well into his backing before Bjarni expertly netted it. In two days fishing I had seven trout to 6 lbs, lost a few more and had countless chances. Five fish were caught on dry flies, and the other two were caught using upstream nymph tactics. I have to say that it is the pinnacle of my trout fishing experiences to date and I feel I have barely scratched the surface. Some of those trout gave me a better fight than salmon of the previous days and I can assure you now I will be returning. 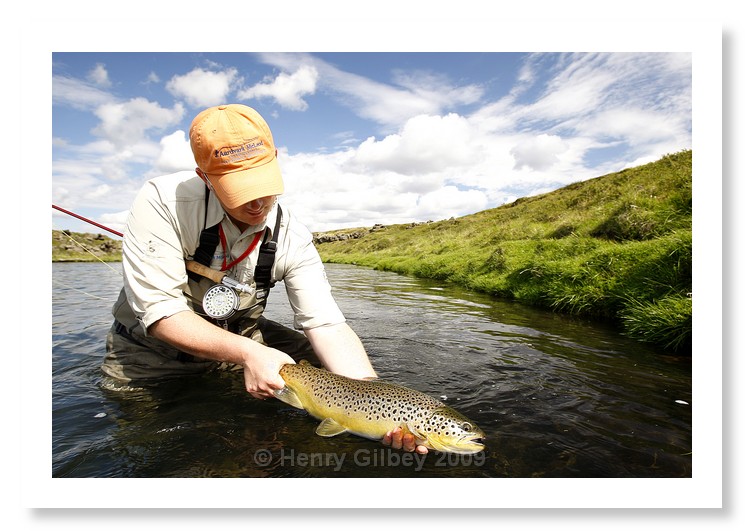 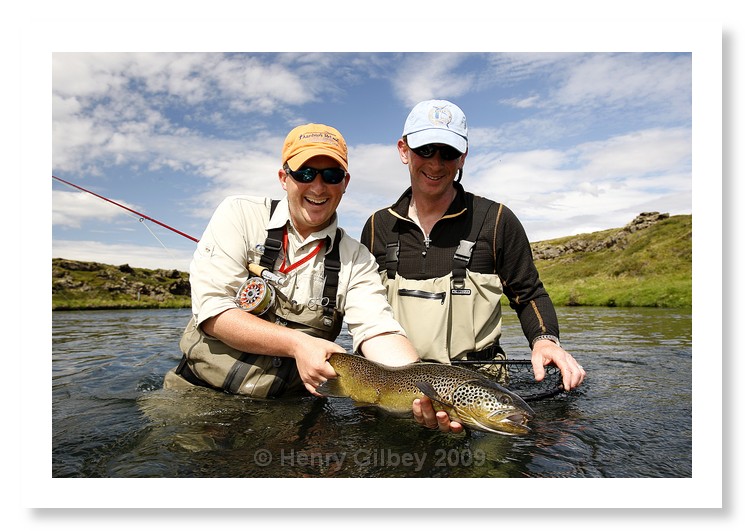 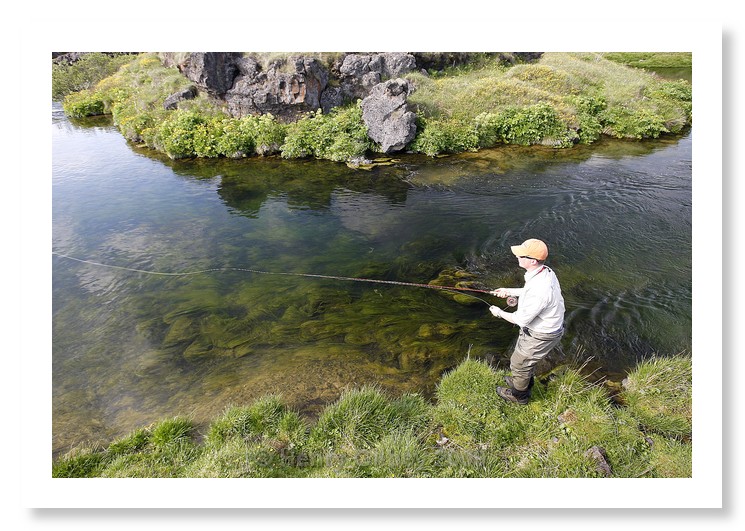