The Miramichi is one of the largest Atlantic Salmon fishing systems in the world with huge numbers running the river. Henry and I left very early from Salmon Lodge on the Grand Cascepedia and drove the four hours south from Gaspe back down to Country Haven Lodge in New Brunswick. Country Haven is operated by Byron Coughlan and is located in Gray Rapids near Blackville on the South West Miramichi. From here his clients have access to huge areas of the Miramichi system. Much of the Miramichi is privately owned, and Byron owns 11 private pools, leases a few more and has access to some 25 in total throughout the system and on the tributaries. The main river itself although large is not daunting, and many of the tributaries such as the Cains, Renous, Little Southwest and Sevogle are a lovely size to fish. The Cains especially reminded me of some rivers I have fished in Scotland. 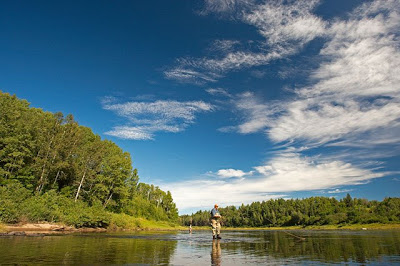 Although you can fish a standard 14′ two handed rod and traditional methods the Miramichi is also world renown for dry fly fishing. It has the highest temperature of any Atlantic salmon river in the world and fish will regularly take in much higher water temperatures. This makes the fish very aggressive in hitting surface flies, and on the Miramichi the Bomber is king. Many of the locals fish with nothing else. They also tend to use a single handed rod, and this is certainly easier when dry fly fishing as it allows better line management and delicate presentation for fishing drys. The idea is to work down stream scatter casting as you go, and the key is to have no drag on the fly. This requires a lot of casting and at different lengths of line. Effectively the further you can cast the more water you can cover.
On arrival we were met by Byron Coughlan, the owner, and Axel Lerche. Axel emigrated from Germany and is one of the most enthusiastic fishermen I have had the privilege to work with. He is one of the directors of Salar enterprises, but more of that later. First, there was fishing to be done! We headed out immediately to a private pool called the Orr pool. Axel and I both fished for a few hours before lunch, and during this time Axel filled me in on some of the history of the surrounding area and the river itself. He also tutored me further on fishing the bomber on a larger river, and various tried and tested techniques that have proved successful here. The weather was bright, and even though we saw a number of fish nothing decided to latch on.
After lunch Axel had to head back to Bathurst for some meetings, so Henry and I fished with Pete Randall in the afternoon. Although Pete is semi retired now, it was a joy to fish with someone who has spent so much time on the river. Our destination, the fabled Ted William’s Pool on the Main Southwest Miramichi. Ted William was a famous baseball player back in the day for the Boston Red Sox. Having fished the Miramichi he fell in love with it, bought a camp and spent many months fishing here. Pete Randall lives on the other side of the pool, so every morning he has his breakfast reading the water and watching the salmon as they moved on their journey up the system. To say he knew this pool well was an understatement… 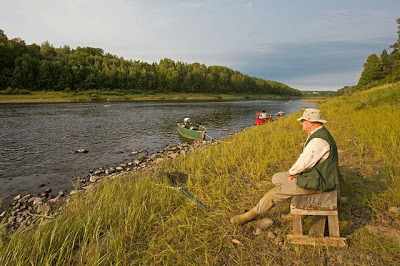 The pool is idyllic, with lovely glassy water rolling over various large boulders creating obvious lies. I should clarify what these pools are like on the Miramichi, as many of them are sometimes 200 – 400 yards long, so there is plenty of fishing. To fish down it once takes at least an hour, so fishing down with a couple of patterns can take a big chunk of time, and a fish could hit at any time. The pool was positively boiling with salmon, and many were rolling and showing while I fished, constantly keeping me on edge. A fisherman on the other side hooked a lovely fish on a bomber, and I could see the take from where I had been sitting. Memorable. 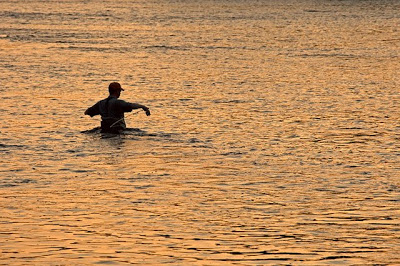 I fished down with a bomber first, and had one roll on the fly but I was too late with the strike to set the hook properly. I then went down with a Green Machine (a very popular wet fly here) and lastly I fished down with a single wet fly called a Red Butt Black Bear on a size 8. As I drew down the last rock and was loosing the light completely the line stopped and slowly tightened. I lifted the rod and felt the thump, thump of a large salmon attached to me. My heart was in my mouth that finally I had hooked one, but before I had a chance to wind in the slack we parted company from one another. Arrrrgggggh! In retrospect I found out what I should have done was to strike the fish…. hard. In the slow water the take had been very light and I should have set the hook. Ah well, that’s fishing! Time to head for home….