Africa is inspiring; for me it is where I grew up and as a child, it nurtured a love for wildlife and for exploration. As an adult, I have travelled much of its Southern and Eastern landmass and, finally, 20 years after I caught my first tigerfish (Hydrocynus vittatus) in the Okavango Delta on a spinning rod, I am heading back to try and catch another; this time on fly.

It’s not too late to join me on this long overdue adventure. Tanzanian tigerfish await and for more details please contact Charlotte Chilcott or call +44(0)1980 847389.

Extremely aggressive, tigerfish are Africa’s most sought after freshwater game fish and these hard fighting, fish, with their propensity towards aerial acrobatics and a truly impressive set of flesh destroying teeth, are Africa’s ultimate freshwater challenge; particularly for those of us wanting to target them on fly.

Where to go and when?  Wherever you go in the world, picking the optimum time for any trip is key and I hope that the summary below will, if nothing else, give you the inspiration to work out with us which destination will fit into your diary, to pack your 9#’s and your tiger wire, and fly south for a great (and toothy) fly fishing adventure. 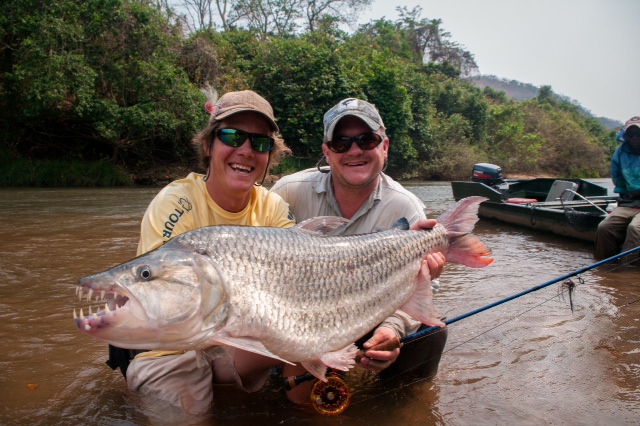 TANZANIA
The southern Tanzanian rivers of the Mnyera and Ruhudji can offer a realistic chance at the tigerfish of a lifetime.  A ‘trophy’ tigerfish further south on the Zambezi is one weighing in over 10 lbs but Tanzania has its own set of standards and with an average fish in these river systems weighing around 8 lbs, tigerfish well into the double digits are landed on such a regular basis, that a Tanzanian ‘trophy’ fish has to exceed the 20 lbs mark.  A relatively short season, August to mid-November, sees only eight anglers a week attempting to land their tigerfish of a lifetime.

ZIMBABWE & ZAMBIA
Best known of the tigerfish destinations, the mighty Zambezi, starts its journey as a small spring in north-west Zambia and eventually winds its way to the Indian Ocean passing through or bordering six countries before finding its way to the sea. En-route it thunders over the spectacular Victoria Falls and into the steep sided Batoka Gorge before it hits its first dam wall at Lake Kariba, home to an annual tiger fishing competition held in October. Continuing East below Kariba, it is flanked by two of Africa’s most important wildlife areas, Zambia’s Lower Zambezi National Park and Zimbabwe’s Mana Pools National Park before eventually crossing into Mozambique where its power has again been harnessed at Cahora Bassa. The final leg of its journey takes it through Mozambique to mingle with the salty waters of the Indian Ocean.

That’s a fair amount of water to fish and where you will fish is determined by when in the year you are planning on fishing it, and how you want to fish it. Clear water is key particularly for fly fishermen and those fishing conventional tackle have an extended period in which to fish. 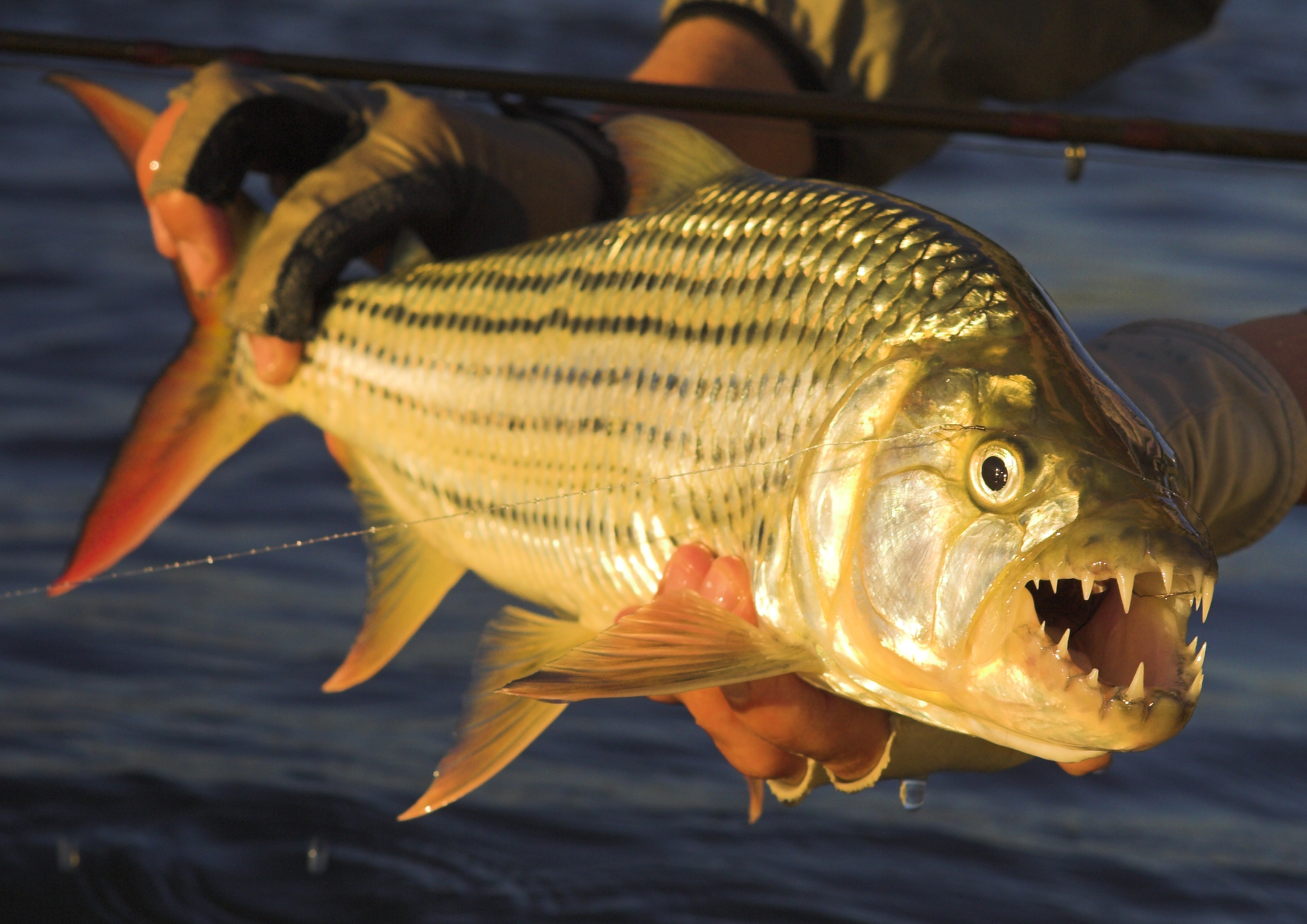 UPPER ZAMBEZI … above Victoria Falls
During the rainy season, November to March, the river rises, normally breaking its banks on the lower lying flood plains of the upper Zambezi in December. The influx of water into the river system during this period, as water drains into the main river from the highlands, muddies the water and makes fishing a lot more challenging and pretty unproductive for fly fishermen. Conventional anglers will continue to fish, mainly drift baiting, with some months in the rainy season more productive for them than others but for fly fishermen, it’s a closed period.

With the spreading waters go a multitude of species (insects and crustaceans as well as fish) to feed and spawn in the nutrient rich waters of the floodplains. The structure in these shallower waters provide a safer haven during this spawning season than the deeper waters of the main channel as the tigerfish are unable to capitalise on their hunting strength, their speed.

The water retreat starts in May, drawing the baitfish back into the main channels and June heralds the start of the prime fishing month as the tigerfish feed on the returning mass of baitfish alongside the gloriously coloured nembwe and vundu.  Weather wise, June can be a bit chilly but this is prime time for sight fishing for tigers as they congregate to feed on the baitballs created by the returning masses.

As the river moves through July, the quality of the fish tends to improve although actual numbers may drop. As the waters continue to recede in August, emptying the floodplains into the Kasai channel, there comes an entirely different phenomenon, the ‘catfish run’.  The waters continue to drop hitting their lowest in September/October, ready for the rains to start again in November

UPPER ZAMBEZI CATFISH RUN
During September and November the receding waters of the floodplain see thousands of catfish zone in on the returning baitfish, forming massive feeding frenzies, giving rise to the ‘catfish run’. Witnessing the catfish run itself is truly remarkable but with the catfish, come the tigerfish who feed with impunity on the teeming masses of catfish. Visually reminiscent of bonefish charging through packed schools of minnows in Venezuela, the catfish run is a truly unique experience.

MIDDLE ZAMBEZI ….. Victoria Falls to Lake Kariba
It took about five years for Lake Kariba to fill once the dam wall was completed and it continues to provide consistently good fishing during the warmer months and into the rainy season ie August through to December.

LOWER ZAMBEZI ….. below the Kariba dam wall
The lower Zambezi fishes later through late August to mid November although the latter months can be very hot, especially for those of us not used to warmer climes.  As the waters recede during these dry months, they clear up and warm up significantly which prompts aggressive feeding pre spawning as the tigerfish move into the shallower water.  Game viewing also improves during this period; with the waters dropping, the game becomes more concentrated around this permanent source of water so it is the perfect part of the river on which to combine a safari with some excellent fly fishing.

I have read, in equal parts of astonishment and horror, tales of those who pack their rods and brave the unknown in search trophy tigerfish, uncaring of the fact the Foreign Office are adamant that tourists of any form should stay far far away.  Explorers and boundary pushers are a necessary part of life, without them we stagnate and while I am certainly not conventional, I hope I am no longer foolhardy so in my pursuit of tigerfish on fly, I am not going to pack my rods alongside a panga and try and be clever on my own, I am putting my faith in the excellent guides and logistical staff who run the Tanzanian operation and heading down to the Mnyera and Ruhudji in October.  Trip details are available HERE.

I would also like to point out that there is no correlation between the timing of my trip and the fact that my Tanzanian based family will all be in England on holiday then … honest.