Norway and Atlantic salmon are two thing that have gone together since virtually the beginnings of fly fishing, and still to this day Norway remains one of the top destinations to visit. It may not offer the numbers of fish as elsewhere in the world but one thing it does have is big Atlantic salmon. The salmon rivers of Norway have legacies that date back well over one hundred years, and still to this day we see fish in excess of 30 and even 40 lbs each season.

The 2019 season has got off to an excellent start with a good head of very big salmon running many of the rivers, with six salmon over 40 lbs caught in the rivers of the Trondheim Fjord alone. The rivers are currently running at good water heights, with snow reserves still around to keep fish moving throughout June and into July. Mid-July and August does rely more on summer storms to create pulses of water to keep fish moving.

If you are yet to plan your salmon trip this season or are looking for an extra week to fit in here are some of our top picks that are still available this year:

Founded in 1882 when the first British salmon fishers, known as the ‘Salmon Lords’ (Lakse Lorder) used the house as a base for their summer fly fishing adventures on the Gaula River. Travelling salmon fly fishers have now enjoyed over 130 years fishing and staying at the lodge. The Gaula is one of those Atlantic salmon rivers that needs little introduction, it is regarded as one of Norway’s finest and known as ‘the river of silver and gold’. The river sees strong runs of salmon averaging between 14 – 18 lbs with many fish exceeding 30 lbs and a few over 40 lbs. The river is full of character and when clear it carries a slight golden tinge. The surrounding scenery is one of thick evergreen forested slopes interspersed with small villages and farms. The lodge is a traditional big family house and includes seven double occupancy rooms along with a self-contained family apartment in the form of a small house that dates back to the 1700’s. In 2018 one of the Winsnes Lodge August weeks produced a fish of approximately 43 lbs, along with several notable 20 lbers and one or two touching 30 lbs. 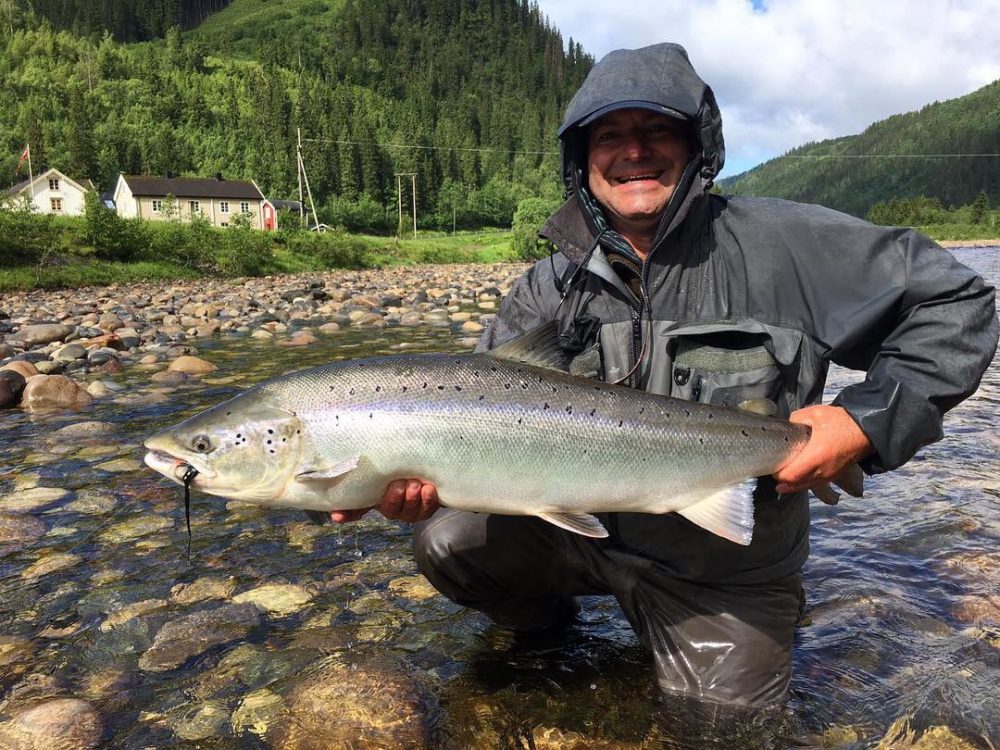 The NFC on the Gaula offers access to over 12 kilometres of private waters (both single and double bank) on the middle and lower river both above and below Gaulfossen. The fishing rotation allows access to all sections of the river during the week’s fishing. The river is full of character and when clear it carries a slight golden tinge. The surrounding scenery is one of thick evergreen forested slopes interspersed with small villages and farms. Due to its location on the lower river it tends to see fish earlier than the upper lodges and can be a great early June option, by July it is still seeing fresh big fish along with a run of smaller summer fish. You can either enjoy your stay in one of the recently renovated traditional self-catered farm houses or full service accommodation at the newly built NFC Lodge at Rogstadmoen. The fishing runs on a full 24 hour rotation, meaning that you pick when to sleep and eat to fit around your pool allocation. 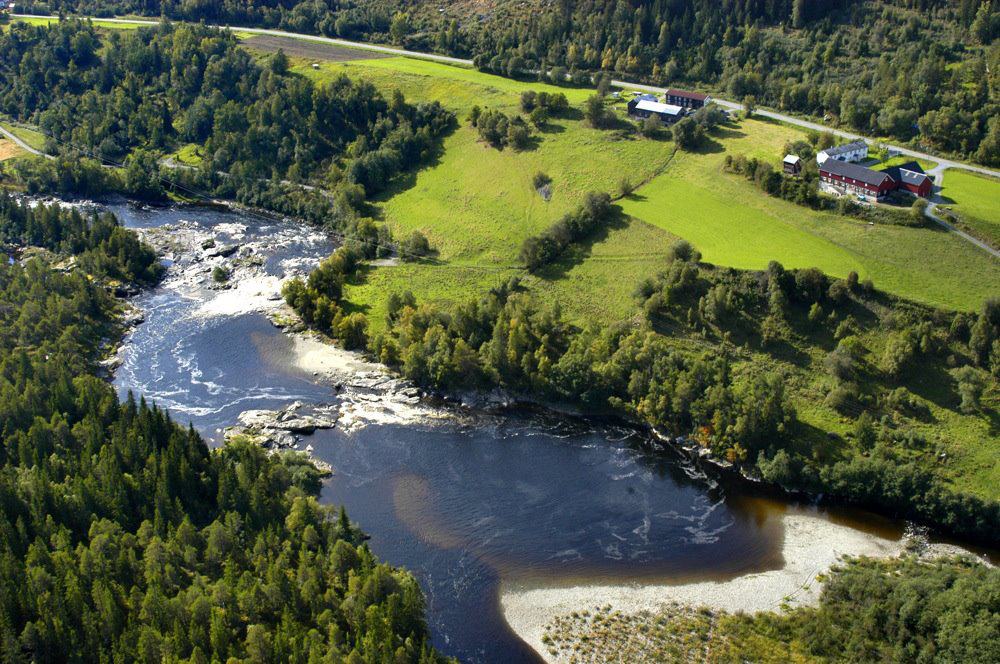 Aunan Lodge is located on the banks of the River Orkla and offers 5.5 kilometres of continuous salmon fly fishing consisting of 17 very different pools, most of which have both banks controlled by the lodge which is very unique by Norwegian standards. Just 12 rods are allowed on the waters giving guests the space and variation to fish methodically and not feel rushed through pools. The Orkla is one of the five major rivers that run into the Trondheim Fjord, along with the Gaula, Nidelva, Stjordal and Verdal. The salmon can run nearly 90 km up the river from the fjord, with great holding pools and runs along the way. The Aunan Lodge is conveniently based 55 kilometres from the mouth of the river meaning that fresh fish can reach the waters quickly and will often take up residency in the pools throughout the season. Each group will also have two guides that will divide their time between the 12 anglers, offering advice and invaluable insights where possible. The size of fish is very similar to that of the Gaula, with most averaging 14 -18 lbs with many fish exceeding 20 and sometimes 30 lbs. 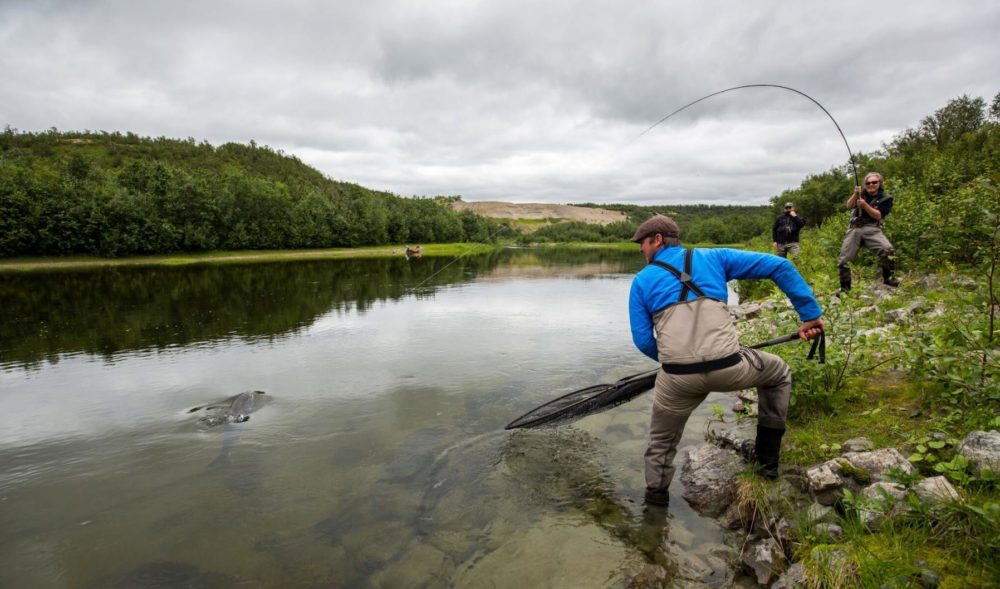 The Lakselv itself runs through Porsanger in the Finnmark county of north Norway and has for many years been an unknown fishing river in comparison with the bigger rivers in the area. In the recent years this pearl of salmon fishing has caught the attention of anglers that are looking for big salmon, and in particular Olderø Lodge. Whilst only a small river, the last few years it has shown to be among rivers with the highest average number of big salmon per season. Many salmon between 40 and 50 lbs have been seen with the record standing at 55 lbs. The river offers easy wading, floating lines, riffling hitch and big North Atlantic salmon. Olderø fly fishing Lodge fishes a total of 6 beats in a rotation that is decided upon at the beginning of each fishing week. During a week anglers will fish all of the beats and will have the best chance to get into some exciting salmon fishing during their stay. 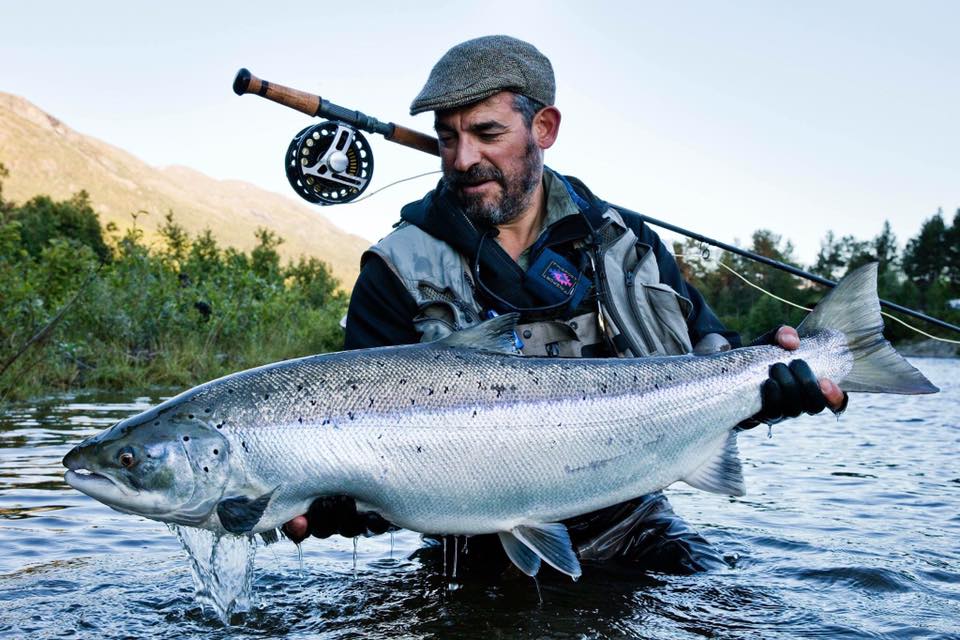 The Reisa River, originating in Finmark and surrounded by spectacular mountains and forested valley sides, offers 85 km of beautiful salmon fly water. Not only is the river stunning to look at but it is also home to some of the largest Atlantic salmon on the planet. Each season fish of around 20 kg (44 lbs) plus are landed on the fly. Complimenting the wonderful river, Reisastua Lodge offers a comfortable base for salmon anglers to explore this majestic valley. The lodge offers fishing throughout the length of the river, including access to some of the hardest the reach pools by the use of river boats.