Dawn broke on a damp and misty morning over Lake Bled as I hurriedly packed up my final belongings, today I would be switching from the Sava Valley over to the famous Soča Valley. On a map, these valleys look extremely close, although there is one key obstacle in the way… The Julian Alps. Stretching high into the clouds, this obstacle presents a spectacular journey quite literally through the mountain. During World War I tunnels were created through the mountains as routes to run supplies to the Front line. Now these tunnels are used as transport railways, in particular a car train that runs from Bohinjska Bistrica to Most na Soči. The train takes approximately 30 minutes and takes you through beautiful alpine scenery, an experience not to be missed.

Once we were off the train we crossed the Idricja River and headed to the Bača River. Like all the rivers I had seen so far in Slovenia, I was in awe of the clarity and blue hue of the water. Now we were in the Soča valley two things were different; the mountains were bigger and more intimidating, and the rivers were home to the mysterious marble trout (Salmo marmoratus). 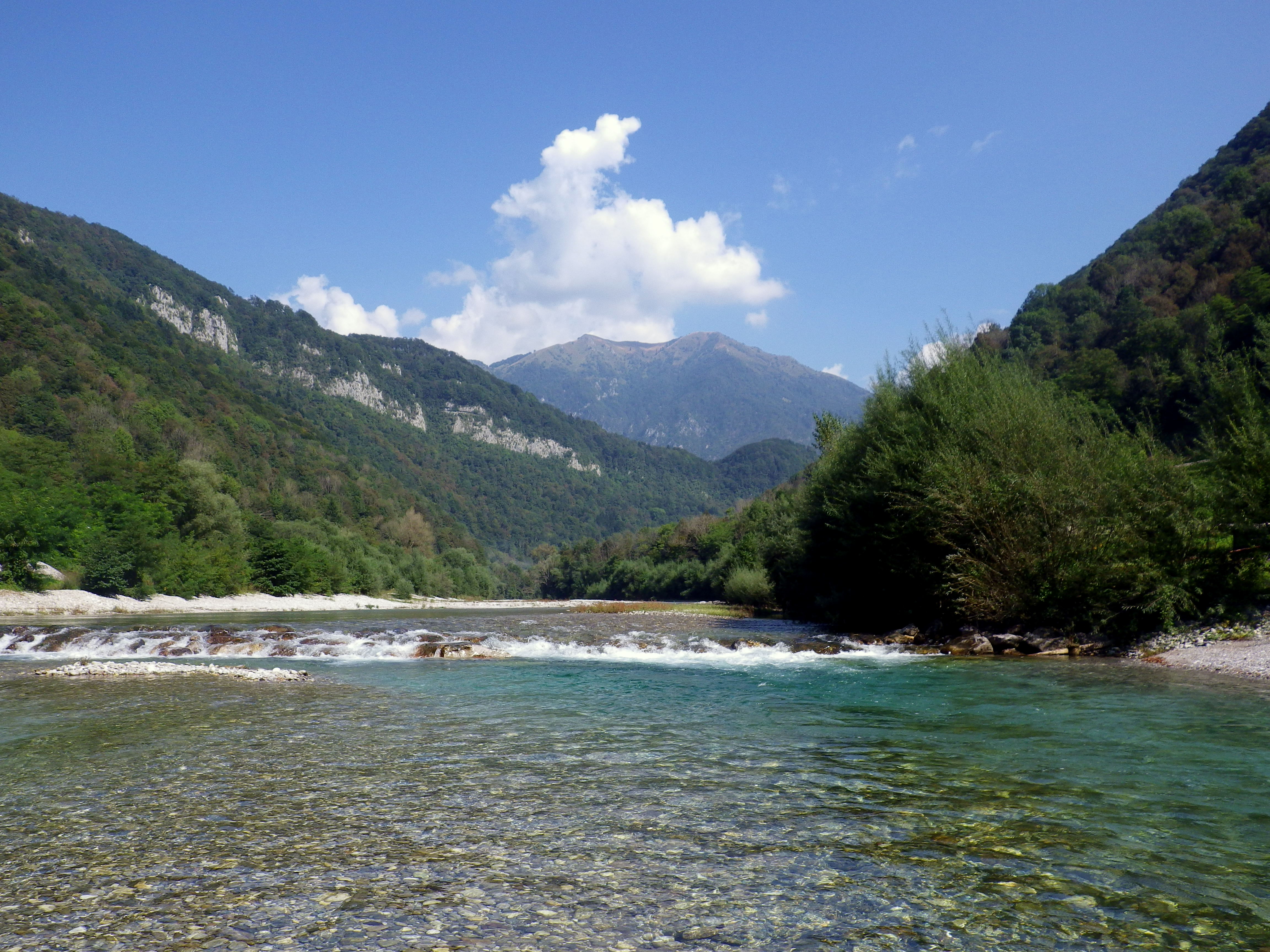 During our journey to the river the sun had burnt through the misty start and the weather was warming up nicely. Keen to make the most of the good conditions, I strung up a 9 foot #3 with a 12 foot leader and a small parachute dryfly. Bostjan, my fishing partner for the day had a similar set up but went with a CDC dry. 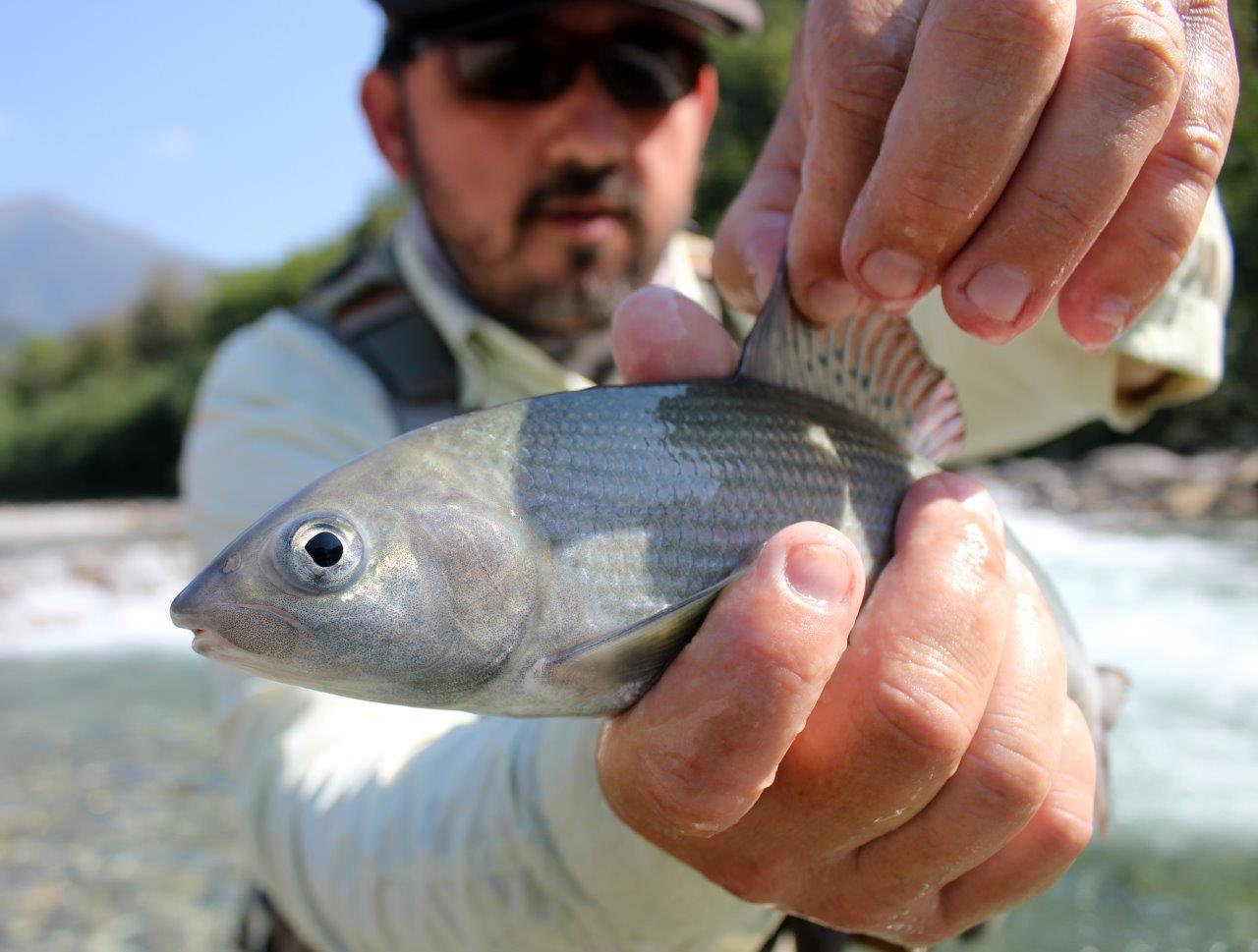 We found beautiful pools where the fish rose confidently to our small offerings, the difficulty however, was that the hooks and tippet on the size 18 & 20 dries were tested as rainbow trout of 2-3 lbs tore up and down. In the deeper, faster sections we resorted to nymphing methods with great success, landing both good rainbows and beautiful pewter coloured grayling. The marble trout remained elusive and mysterious, maybe a new day and new river was to be the key.

My base now was the sleepy and traditional town of Kobarid, situated on the middle reaches of the Soča and a perfect location to reach various fishing locations. I enjoyed a good meal and an early night, hoping that this would be key in my quest for the marbles. 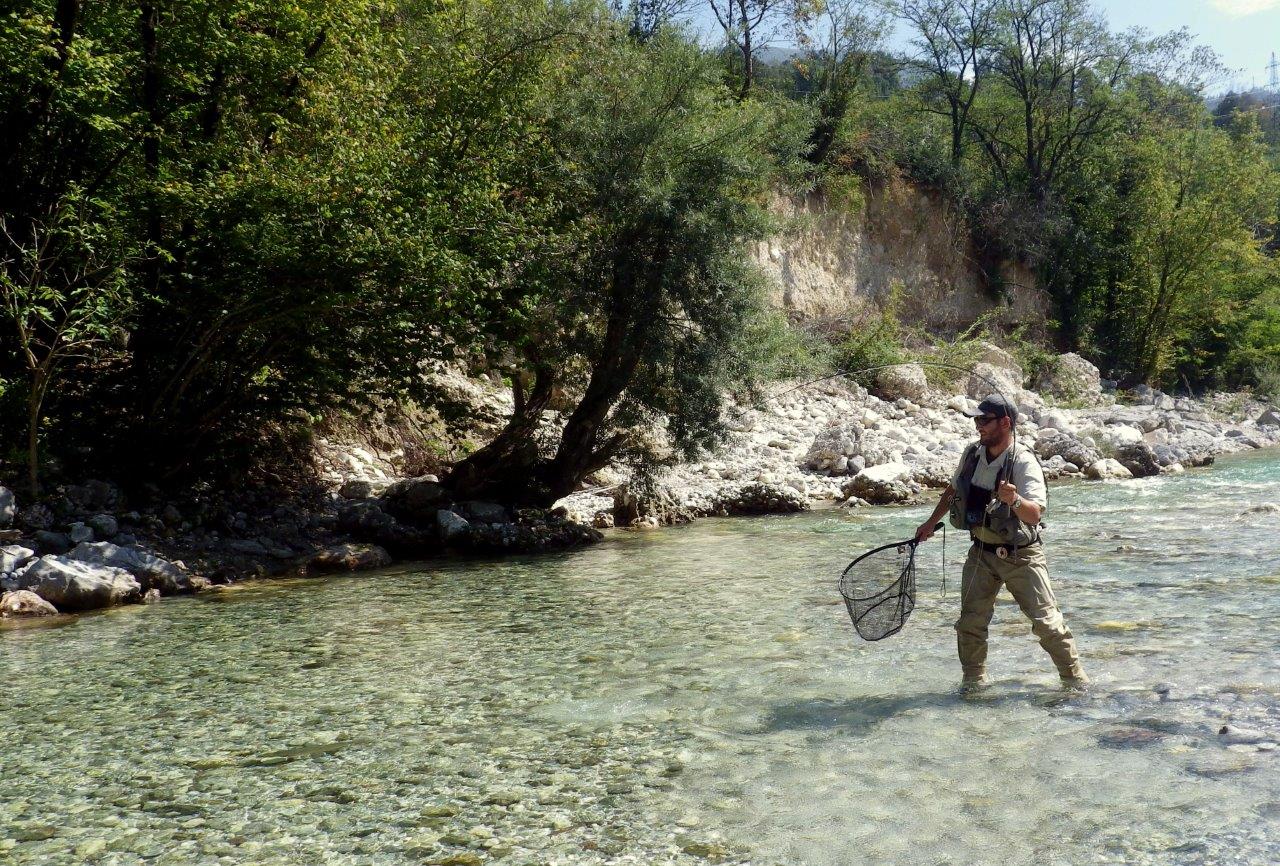 The next day I was met after an early breakfast by Luka and we were soon on the road, sun blazing down on us again. Our destination today was the River Tolminka, near the delightful town on Tolmin. Our first stop was a secret spot for Luka, a place where he regaled stories of large marble trout trying to eat fish that were already hooked. Interest and enthusiasm well and truly peaking I rushed a rod together with a nymphing set-up and hit the water. 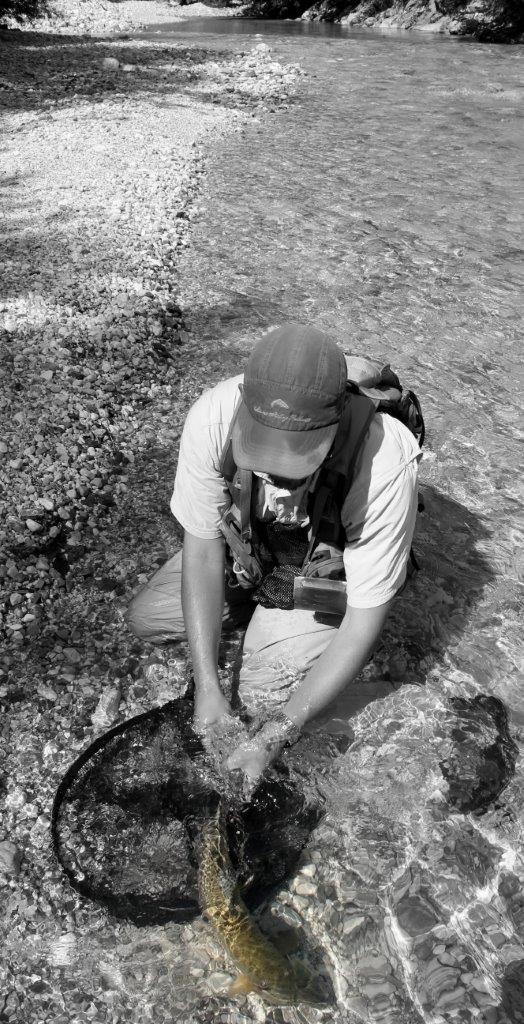 We started well, hooking and landing several good rainbows that we sight-fished from a nice gravel run. Similar to targeting bonefish, the key was to look for the ghostly pattern change on the riverbed and hope that your eyes were not deceiving you! This was all well and good but to find a marble we were going to have to move away from open water and target gnarly sheltered areas. At the head of the pool was a huge overhanging piece of bedrock, the feature was bound to hold fish but the trick would be getting them out. The only vantage point was to position yourself on top of the rock and remain low and allow the nymph to drift under the overhang. 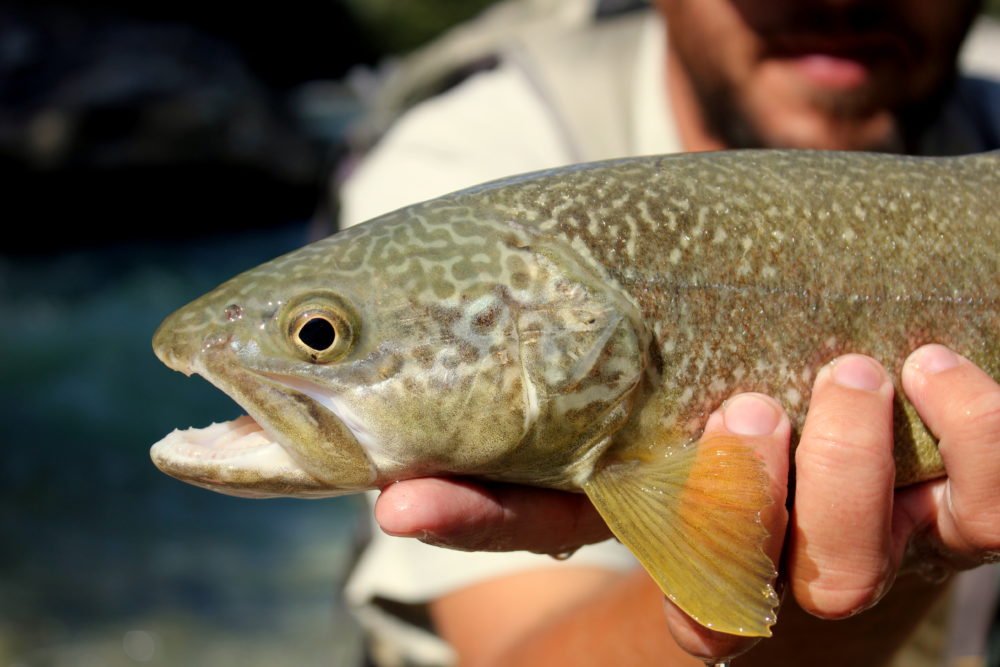 Sure enough, within a couple of drifts a smallish rainbow showed itself and was quickly returned. As we put the fish back we both noticed a subtle olive shape deep in the water and still somewhat hidden from view. Luka indicated that he thought it was a marble so we switched to a heavier fly to get down. A few casts later and the fish showed a little interest, all it took was a slight movement of the rod tip and the take was induced. As soon as the fish felt tension it disappeared under the rock. With some careful uses of side-strain and heart-stopping patience we manoeuvred the fish from the snag-riddled overhang and into open water. Soon the prize slid over the net. Joy, relief and jubilation came over me. The fish may not have been the biggest but this was a marble trout, a beautiful and challenging adversary. 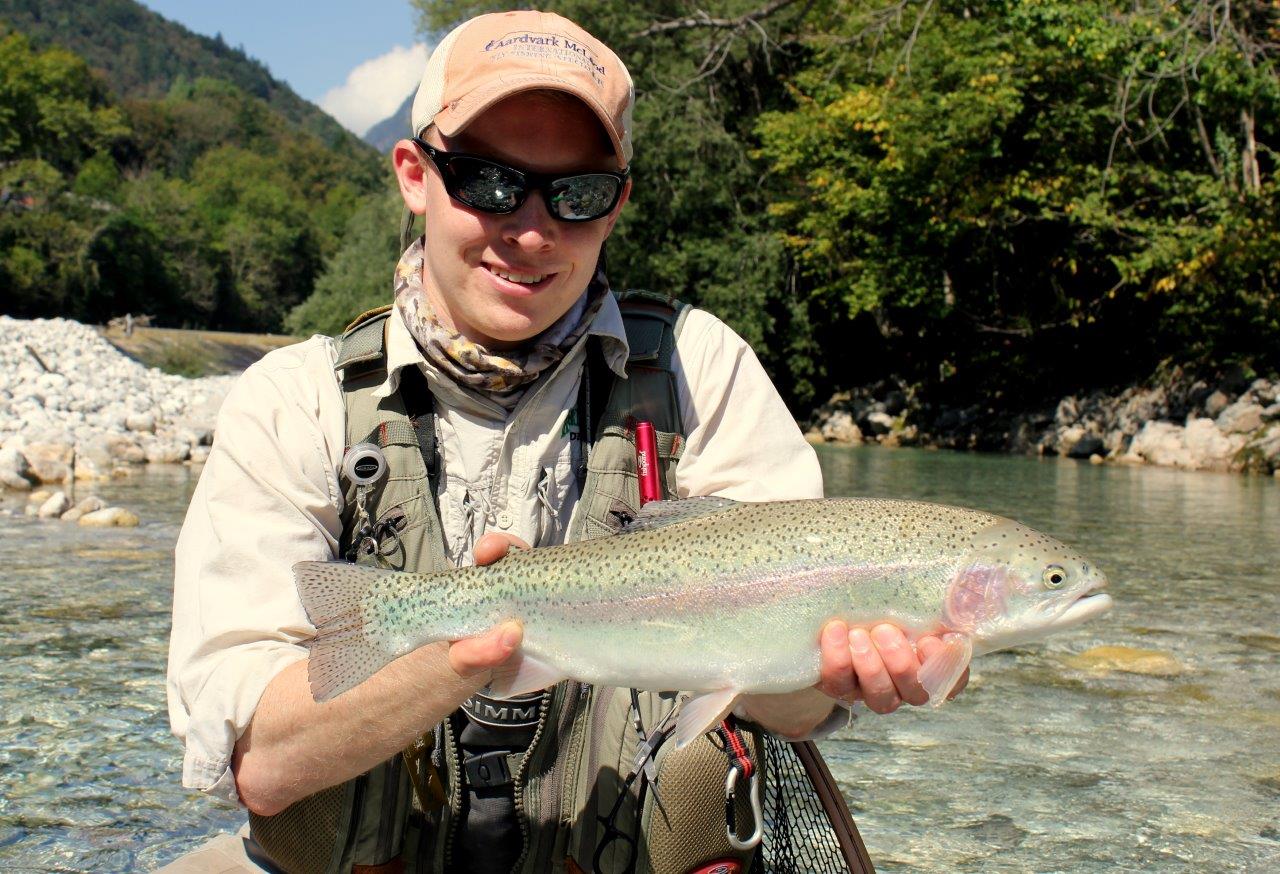 Now that we had landed both a marble trout and several rainbows it was time to target the grayling to complete a Tolminka Slam. We header up river to a beautiful open pool, shaded on the deeper edge by a row of trees, a perfect lie for our quarry. Soon enough, a couple of fish were rising in the shade, a quick change of leader and fly – now a size 16 CDC dun and we targeted the back fish first. First cast, it reared its head and snaffled the fly. The run took it straight downstream of us, not a grayling but a beautiful rainbow in excess of 3 lbs. The front fish was much harder to trick, maybe wary from the previous battle. With some changing of angles and persistence the second also reared its head and swallowed my offering. The fight, now, was much different. Not running but pulling deep. Could this be our grayling? Sure enough, as the shape moved into the bright light of the pool the long sail-like dorsal fin became visible. A wonderful golden olive grayling was soon resting in our net, a quick photo and our Grand Slam was complete, and before lunch!

The afternoon brought us some technical and hugely rewarding dry fly sport for more grayling and rainbows. By the end of the day the strong runs and deep diving fights had earned us a cold beer and hearty meal. The next day was to be my final day on the water, and my introduction to the mighty Soča. 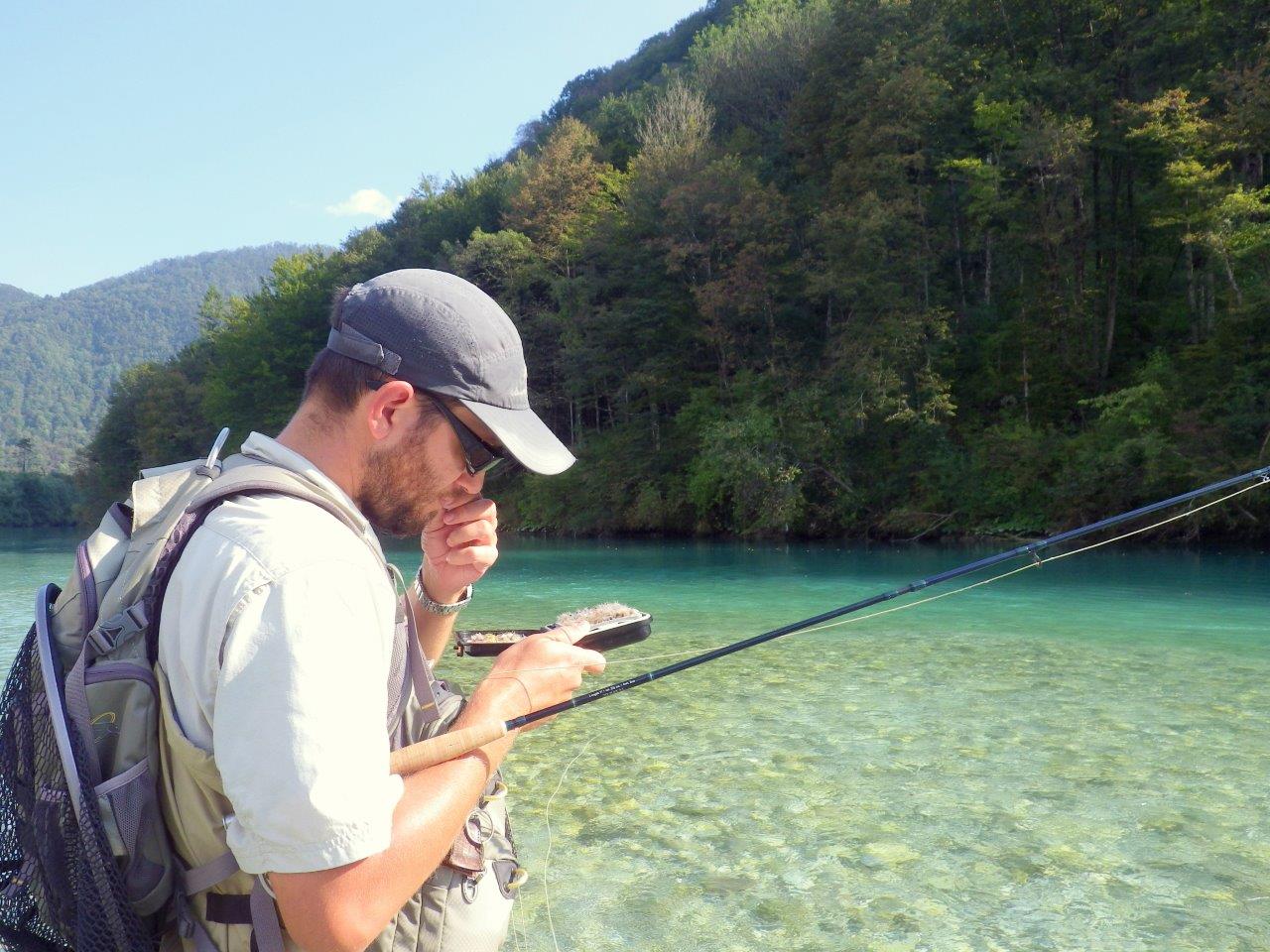 As an avid trout angler I had wanted to visit the Soča for many years. Overnight the weather had changed dramatically, the clouds had rolled into the valleys and rain was hammering down on the mountain sides. The rain had added a slight milky colour on the water, still clear but tainted. The misty clouds hung in the valley adding a new dimension to the landscape. 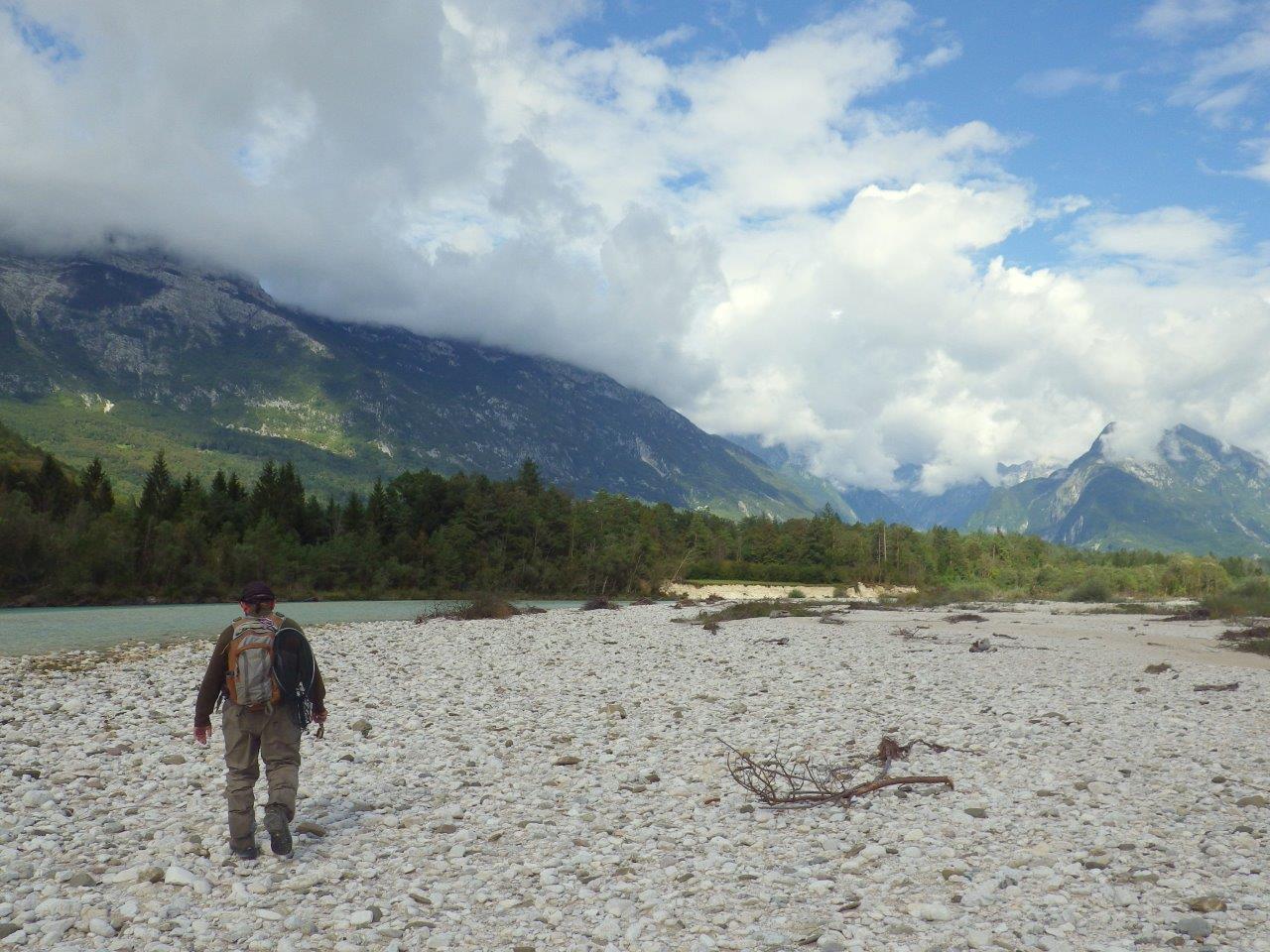 Our location today was the middle reaches, the river here is braided. The river cuts its course through a huge riverbed, that is mainly dry, a flood plain for the snow run-off each year. This river suited me as an angler, it was challenging, infuriating yet ultimately rewarding.

In the wet and misty morning it did not take us long to find pockets on fish. They were not, by any means, easy and required numerous fly changes. We found success on tungsten-beaded size 16 pheasant tails. The fish liked the small subtle nymphs but it was important to get the flies down to the fish as they seemed to not want to move a long way for food. 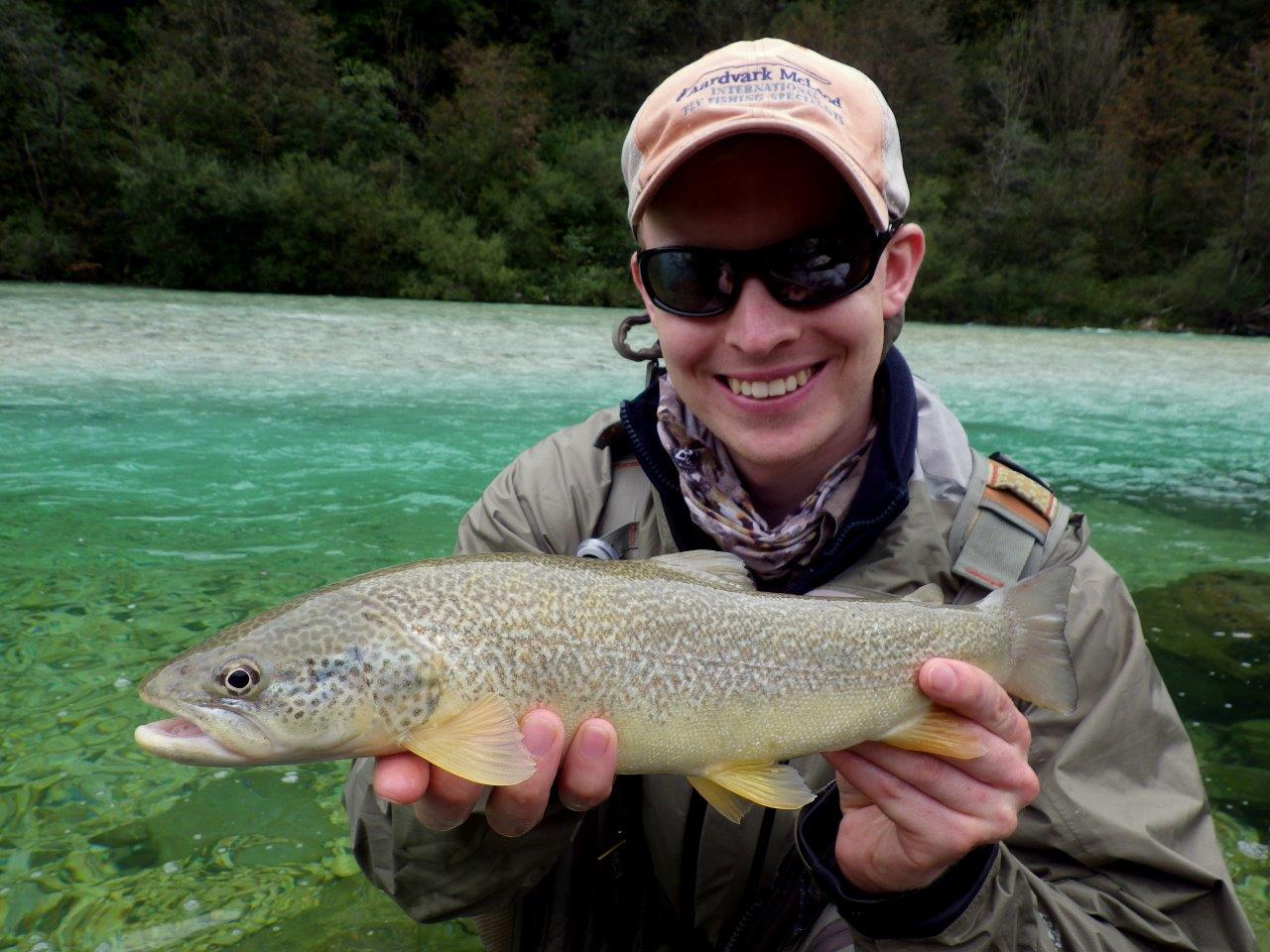 To my delight we managed a marble trout and several rainbows from our first stop, my mind was once again drifting off about finding a grayling to complete a second slam in two days. We hopped back in the car and moved to our second location. Here, we stopped by a bridge and in true angler fashion we had to take a look over the edge… I couldn’t believe my eyes. Mid-water there was a shadowy outline. A fish that made the full timber log by its side look like a twig. With excitement we clambered down the bank, changed our leader to 15 lbs and our fly to a bunny-streamer. However, within one cast, like a ghost the shadowy outline disappeared into its hiding hole. We estimated the fish at 17 lbs, one for another day perhaps… 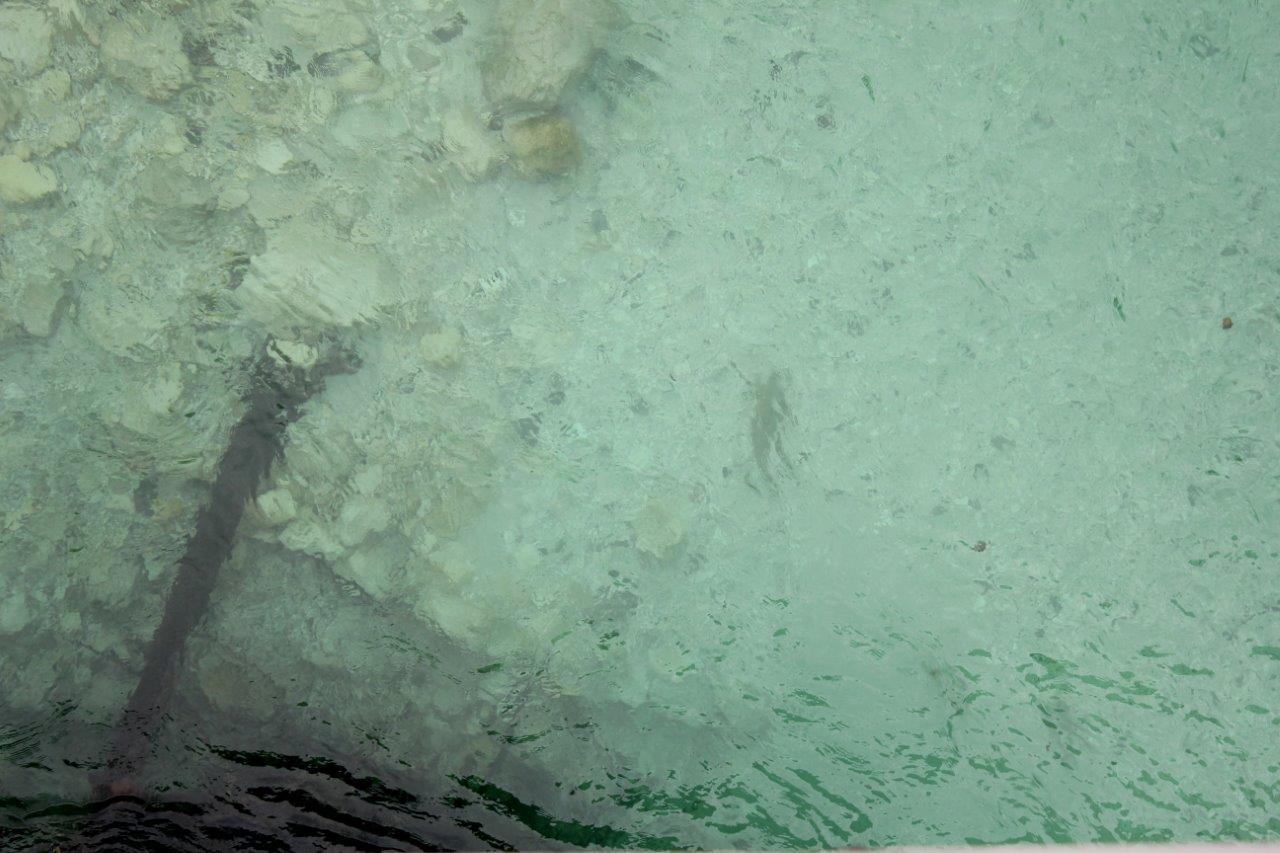 We continued on with our nymphing setups and caught another small marble and several rainbows. Bostjan also caught a grayling. He then put me on the run and soon enough my line twitched, indicating a take, but over excitement got the better of me and the sharp strike resulted in a flash of silver and my grayling opportunity had gone! 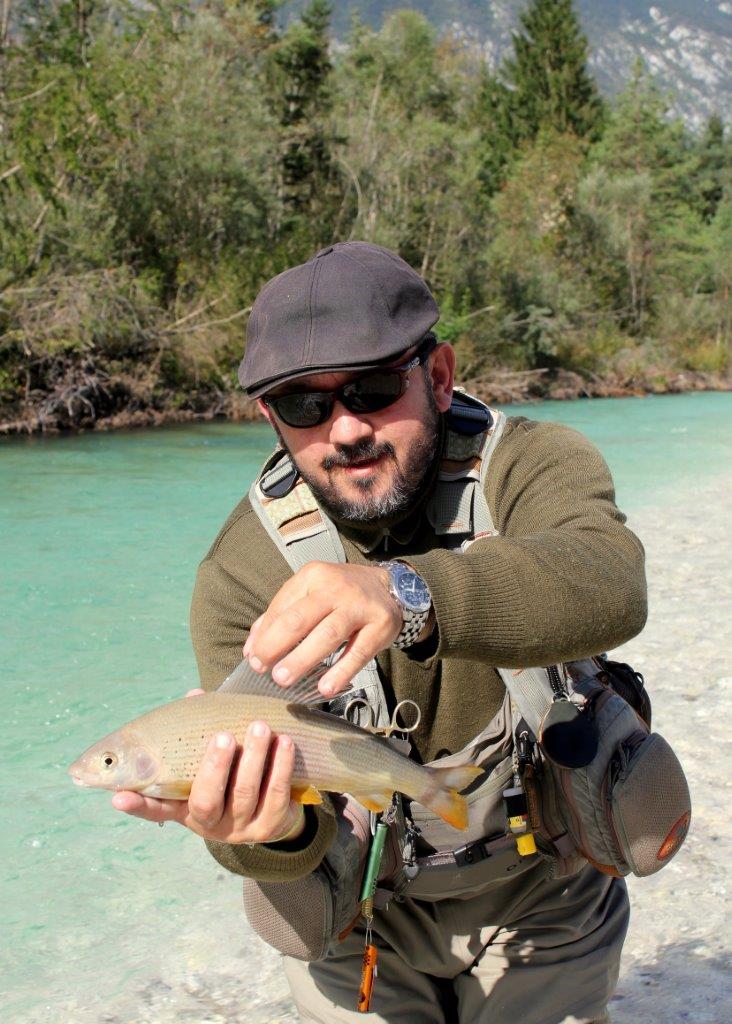 I may not have managed the Soča Slam but this river had truly captured my admiration. I had worked hard and been rewarded with marble trout and rainbows but the river was keen not to give away everything. I had been shown glimpses of why this river is revered in European fly fishing. 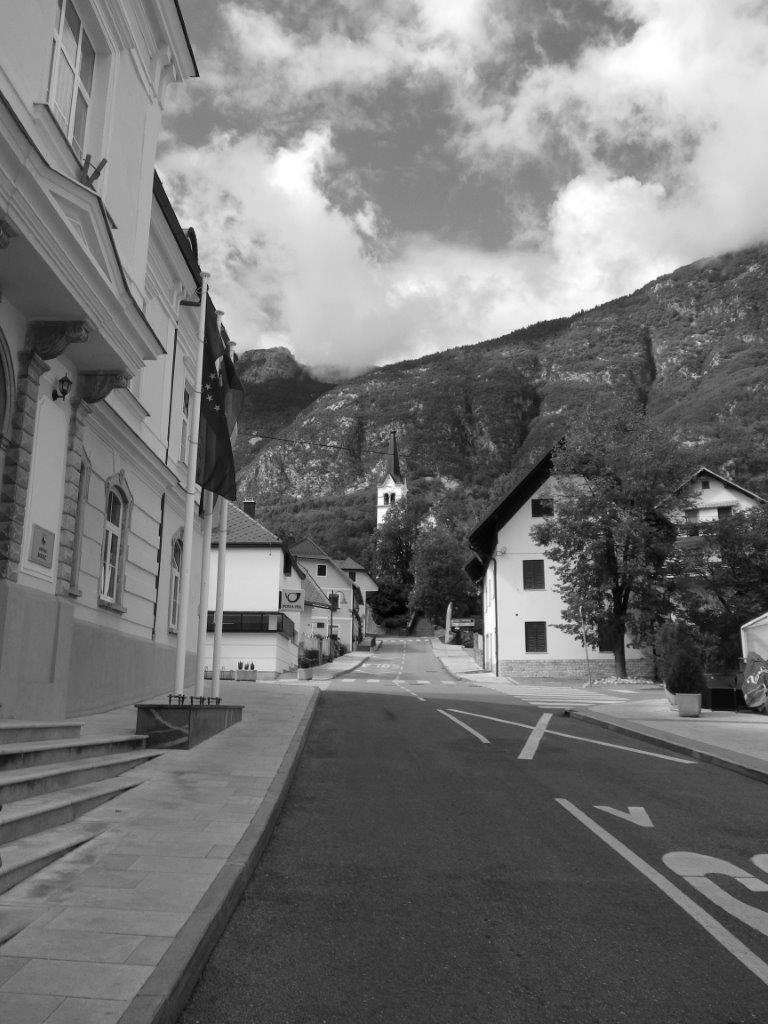 Slovenia is much more than just a fishing destination, it is a country steeped in history and beauty. On the morning of my flight Bostjan kindly drove me up the Soča valley, a beautifully carved series of mountains, gorges and side streams. The valley is filled with testaments to its history, from Mountain forts and WW1 burial sites. Our journey then went over the top of the Julian Alps, a climb high into the mountains and the clouds, this was a route built by the Russian prisoners of war. You descend down into the Sava valley on the other side, and soon I was returned to Ljubljana airport. 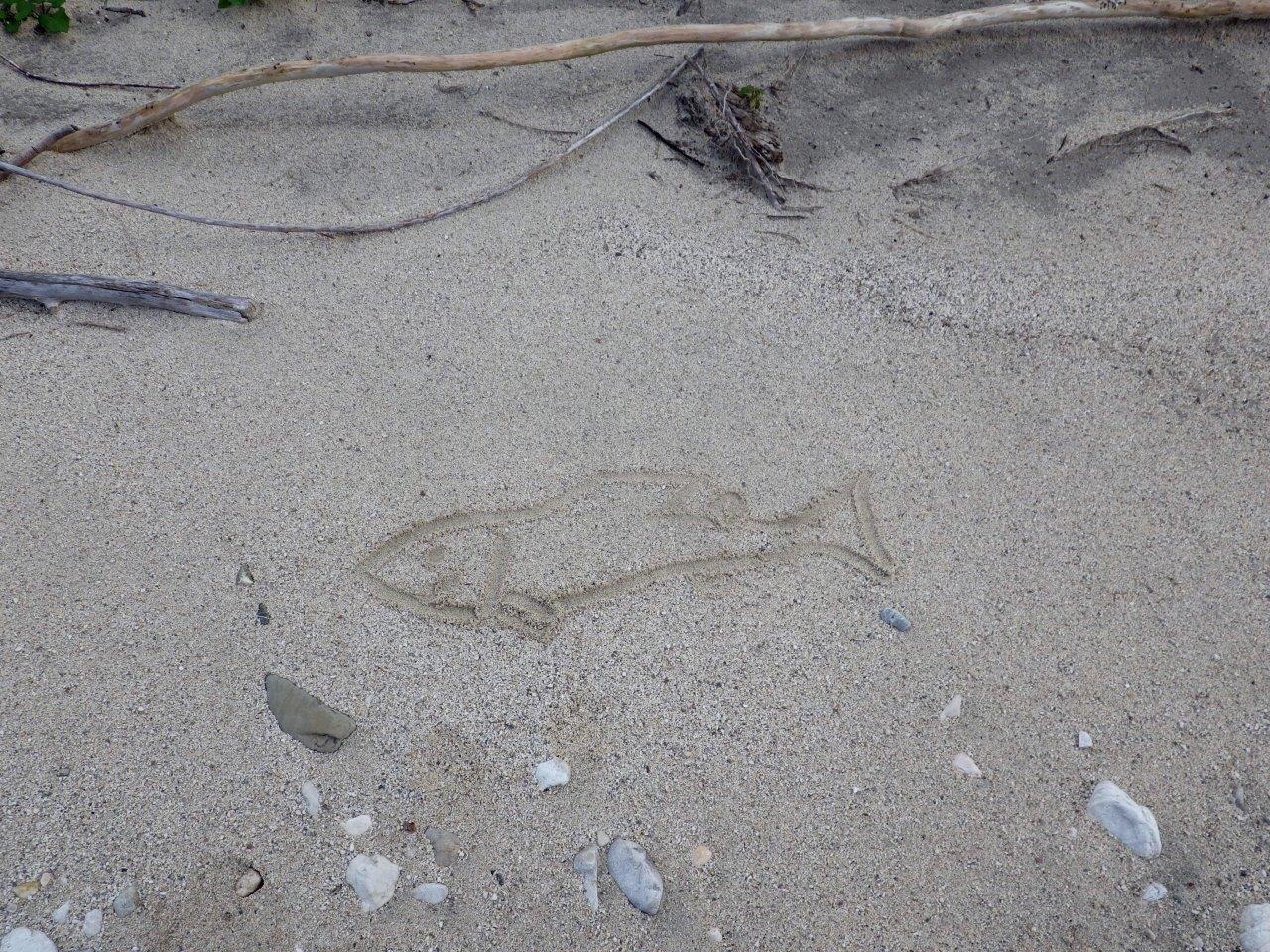 As with any trip, it went far too quickly. The fishing had been rewarding and fantastic, the river and weather had been kind to me and the country had ultimately captured my fishing heart. I will be back, there is unfinished business with some Soča grayling and a monster marble trout.

If you would like more information on the fishing in Slovenia please contact Alex Jardine by email or call our office on +44(0)1980 847389.